Climate change: both sides of the discussion 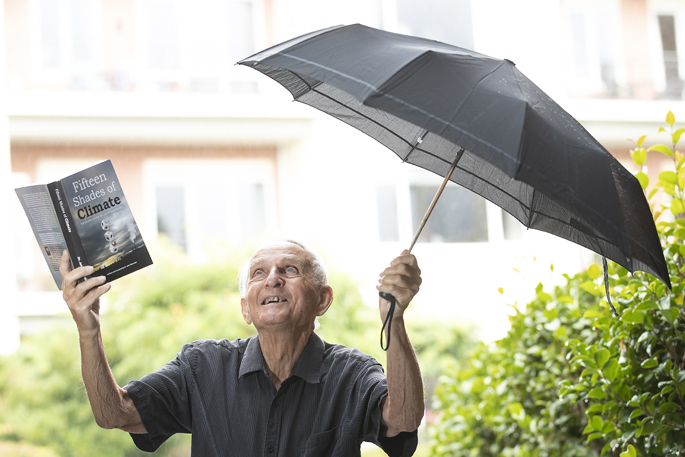 Some of the answers to the complexities of the climate system are given in my recently published book “Fifteen shades of climate… the fall of the weather dice and the butterfly effect”. The following are extracts from pages 5-9.

Weather dice were shown on the cover of my third book The Uncertainty Business – Risks and Opportunities in Weather and Climate, published in 1986.

The cover, which has two dice on a “monopoly board”, with various weather symbols on each side of the dice, was to represent the reality that most if not all of the weather (and ultimately most of the climate) with the exception of human induced weather and climate effects, is ultimately related to how the weather dice fall.

Professor Edward Lorenz (1917-2008) was a meteorologist who worked at the Massachusetts Institute of Technology (MIT) in the United States who in 1972, during the 139th meeting of the “American Association for the Advancement of Science”, posed the question: Predictability: Does the flap of a butterfly’s wings in Brazil set off a tornado in Texas?

This paper resulted in the development of “chaos theory” or simply “the butterfly effect” which among other things endeavours to explain why it it is so hard to make good weather forecasts beyond about 10 days, and has implications for making good climate forecasts, particularly when considering the natural causes of climate change.

Who or what controls the fall of the weather dice is the ultimate question for all meteorologists and climate scientists… and if the butterfly effect is correct, we may really just have to learn to live and adapt to whatever the weather and the climate provides

Thirty years ago, it was unconceivable that the New Zealand or any Government would have a Minister of Climate Change; indeed back then, as weather forecasters and climatologists we just got on with our job of making the best possible weather forecast and providing the best climate advice to all those who requested information, without guidance or interference from the government of the day. How things have changed!

Climate change: both sides of the story… a Rotary Conference discussion

I opened the proceedings with a brief overview of the subject with reference to the fact that when I started in the “weather and climate business” over 50 years ago, nobody would have forecast that in 2007, 15,000 people would attend a climate change conference in Bali (now over 30,000 people attend such conferences). I pointed out that I was the only person invited from New Zealand to attend the key WMO (World Meteorological Organization), UNEP (United Nations Environment Programme), ICSU (International Council for Science) Climate Conference in Villach, Austria, in 1985. This was in the mind of many people “the start of the whole complex subject of what role ‘man’ and in particular greenhouse gases have in ‘controlling’ our climate”.

The following is what I said in my opening remarks: Forty-seven years ago, after already being a weather forecaster in New Zealand and Canada for a few years, I was appointed to the staff of the University of Otago as a Lecturer in geography. Among my duties as a Lecturer I presented an Honours course in climatology. At Otago the course on climatology included two main topics, first the causes of climate change, and second the evidence for climate change. At that time, little did I know, nor I suspect any of my students could foresee the explosive nature of the subject of “Climate Science” as it is now called, during the last decade, and particularly over the past few years.

My involvement in climate science has subsequently involved National Meteorological Services in New Zealand, Australia, Canada, Universities in New Zealand, Canada, USA and Ireland, as well as many years involved in the World Meteorological Organization including being President of the WMO Commission for Climatology for eight years. Among the many climate science meetings I have attended, the most significant, is my involvement in the WMO, UNEP, ICSU Conference held in Villach, Austria in October 1985. One hundred experts from 30 countries attended the meeting (in contrast to thousands who now attend such meetings), and I was privileged to be the only New Zealander invited. We were all there as experts in various fields of science endeavouring to do the best we could in looking at the complexities of climate science. Among the principal findings of this conference was… “while other factors, such as aerosol concentration, changes in solar energy input, and changes in vegetation, may also influence climate, the greenhouse gases are likely to be the most important cause of climate change over the next century.”

At that time, even though I was partly responsible for the writing of the paragraph I have just read, I, along with a few of my colleagues, had some misgivings about it, and were somewhat surprised that within a year “human-induced climate change” caught the imagination of much of the world. Two main views held by climate scientists.Irrespective of my personal views on the matter, it is clear that there are two main views held by climate scientists and others: The first: those who are mainly involved in the Intergovernmental Panel on Climate Change (IPCC) and many or most Government scientists, plus others, such as Al Gore, and many politicians and most journalists who consider that man, including domestic animals, is the prime cause of recent changes in the climate. The second: those – in the main some University scientists, many retired climatologists, and a minority of politicians and journalists, who consider that nature is the main cause of changes in the climate.

One of the most fascinating things about the climate change scene is the tremendous growth in the political and economic aspects of it. In 1970, I wrote a book called The Value of the Weather, and later on in 1986 I published a book called The Uncertainty Business – Risks and Opportunities in Weather and Climate. In both books, I made only a few references to “global warming” or “climate change” but many references to variations in the weather and climate on a day to day, season to season, and year to year basis. It is my view that these variations are still paramount but the current emphasis seems to be on what is going to happen to the climate 20, 50 and 100 years ahead, and hence the debate we are now to have here this afternoon. Jim and Willem were each given about 20 minutes to state their case, and this was followed by about 20 minutes of questions, some of which I obtained from attendees at the conference, but most were questions which came from me.

Prior to the conference, both Jim and Willem agreed that I should ask the questions. The following were some of the questions which I asked.

1. Irrespective of the cause of Climate Change, could you explain why the media and many politicians seem to consider that, in general warming, is a bad thing, and by inference does this mean that, in general cooling, is a good thing?

2. If the IPCC was forecasting a cooling rather than a warming, what difference do you think that would make to Government, UN and Greenpeace attitudes?

3. The Maunder Minimum, from 1650-1715, which was a period of very low sunspot activities, and associated with very cold conditions in Europe, was a significant feature of the history of the last millennium. Are we likely to get another Maunder-like minimum in the near future?

4. During the period of Viking exploration from about 800 to 1300AD the Northern Hemisphere was associated with relatively warm conditions, and in many cases it was warmer then than during the last 30 or 40 years. During the 1200’s Greenland had about 3000 settlements and yet by 1550 the last of them had disappeared. There was no human-induced greenhouse warming during that period, so is there any reason why we could not have such a period again.

5. I understand that the IPCC seems to be giving relatively small importance to the role of the sun. Why is this the case? Do we really know all there is to know about solar activity?

6. A key debate in the climate change arena appears to be whether increases in CO2 (from whatever cause) causes warming, or whether warming causes increases in CO2. When do you think we will be able to establish the truth about these statements, or have I got it all wrong?

7. Why is an increase in CO2 not considered to be a good thing? I understand that some scientists suggest that the biosphere is currently suffering from “CO2 starvation”, and that a doubling of CO2 would increase plant production by 20%.

8. Many or most climate scientists who have publicly stated that they do not agree with the findings of the IPCC are labelled as “sceptics”, yet economists who disagree with the Reserve Bank on monetary matters are not considered to be “economic sceptics”, but simply experts who have a different view of things. Why is this so?

9. To Willem: If in the future it can be established without question that the current viewpoint of the IPCC is correct, how would people like yourself and organizations who take the contrary view of the IPCC, deal with this situation?

10. To Jim: If in the future it can be established without question that the current viewpoint of the IPCC is wrong, and that nature is the main driver of climate changes, how would the IPCC, and organizations like NIWA deal with this situation?

Jim and Willem were then given five minutes to sum up. From what I heard from the attendees, the discussion seemed to be an excellent way of presenting this challenging subject, and my sense was that the majority of the audience there were yet to be convinced that man is really in control (as most media, politicians including the G8 leaders, and the IPCC believe), rather than nature.

Jim and Willem agreed on many points, but it was the interpretation of the data, much presented in graphical manner, which was the key difference in their presentation. Jim obviously took in the main the “IPCC line”, but agreed with Willem that we did not know everything, and Willem took in the main the more “academic line”, but also agreed that we do not know everything. 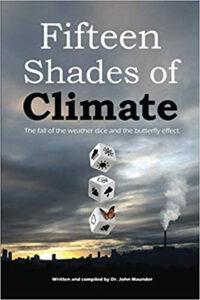 Dr John Maunder, was President of the Commission for Climatology of the World Meteorological Organization from 1989 to 1997, and has over the last 70 years been involved in the “weather business” in various countries, including New Zealand, Australia, Canada, the USA, Ireland, Switzerland and England, through activities in national weather services, universities, and international organizations. Publications include five books: The Value of the Weather (1970), The Uncertainty Business – Risks and Opportunities in Weather and Climate (1986), The Human Impact of Climate Uncertainty – Weather Information, Economic Planning, and Business Management (1989), the Dictionary of Global Climate Change (1994), and Fifteen Shades of Climate (2020). Dr Maunder is now retired, living in Tauranga, New Zealand.