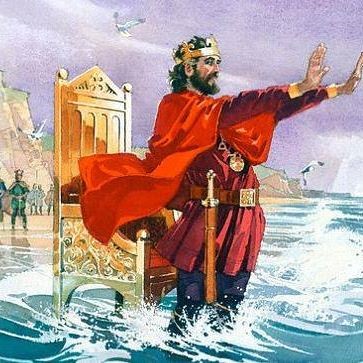 CLINTEL wishes to hearten and encourage members of parliament and proposes to them how to get the economy back on its feet without risky experiments.

Divinely-appointed King Canute (above) could not stop sea-level rise. Nor can we. We cannot prevent the emergence of natural events such as earthquakes, tsunamis, volcanic eruptions, extreme weather, global warming and cooling, natural mutations, economic cycles, etc. (‘mitigation’). When such ‘Black Swans’ occur – at a micro or macro level – we should identify them early and adjust to them in a smart way (‘adaptation’). The history of evolution shows that mankind is very successful in adaptation.

Natural changes are part of life
The success of civilization depends on our ability to adapt to change. Adaptation works. We are good at it. Forms of life that could not adapt did not survive. Idealistic attempts to re-engineer nature with super computers and utopian “green deals” in order to prevent inescapable changes have always failed. To get the economy on its feet again, please stop preaching doom and gloom. Instead, your policies should give hope and point the way to a speedy recovery with appropriate and realistic measures.

Don’t try to stop climate change, adapt to it
We can and should adapt to warmer weather and rising sea level, when they become significant enough to require action. We have plenty of time. IPCC’s mitigation policy has never spared one life, while adaptation has already saved the lives of hundreds of thousands.

Don’t try to stop natural mutations, adapt to them
We can and should adapt to the consequences of new virus outbreaks by taking timely steps to prevent spread. Here, adaptation requires immediate action! If the WHO had reported the outbreak immediately when it was first detected, and had insisted on the Chinese authorities to promptly isolate the Wuhan area, they would have saved the world from a deep global crisis.

Don’t heed the profiteers of doom and gloom
Dear members of parliaments please do not become puppets of supranational organizations that claim they can stop or even prevent the occurrence of natural events (‘Black Swans’). Also, do not pay attention to false prophets whose green deals will destroy the global economy for a long time.