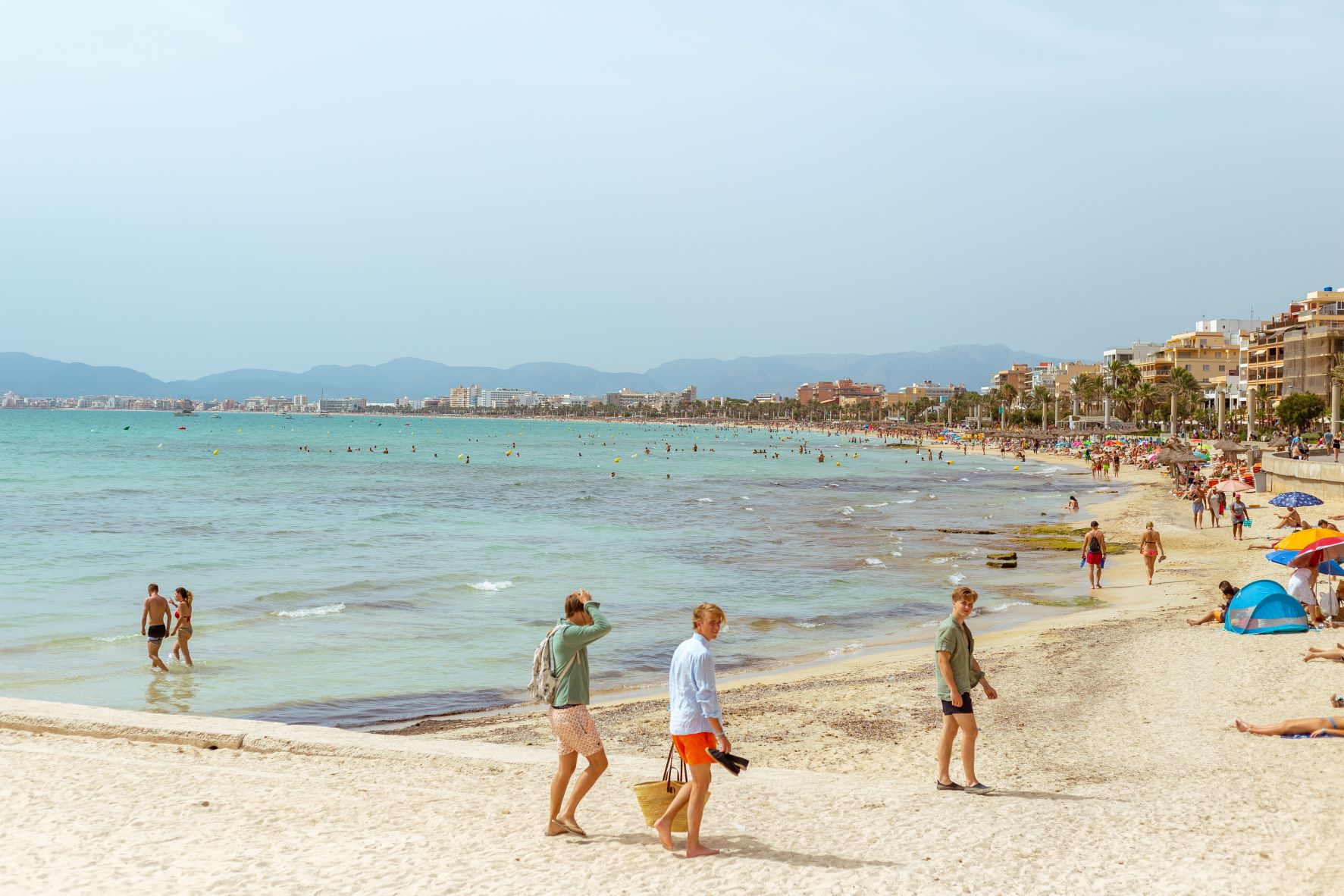 Last week The Netherlands experienced one hot day (39°C in some places) and unsurprisingly it was connected to climate change. The Dutch Royal Netherlands Meteorological Institute (KNMI) even claimed on national television that the hottest days are now four degrees Celsius warmer than a century ago. But is this true? Rob de Vos, a Dutch independent scientist who published a peer reviewed paper on this topic with the Clintel Foundation, did some factchecking.

A Dutch heat wave is measured only at the De Bilt station (which is the headquarter of KNMI) and is defined as a continuous period of at least 5 days during which the maximum temperature is ≥ 25 °C (‘summery days’). During this 5-day period the maximum temperature must also be ≥ 30 °C on at least three days (‘tropical days’) for the period to be named a proper heat wave.

I’m afraid we’re not going to make that in the Netherlands this year. Given the long-term temperature forecasts at De Bilt, there is a good chance that 2022 will go down in the books as a year without heat waves, just as 2021 was, incidentally.

Nevertheless, the Dutch alarm bells were ringing loudly over the past few days, code orange was announced, and it was also a hot item on various TV talk shows. Several people pointed out to me that KNMI has been quite alarmistic in their press appearances such as at the public broadcaster NOS (our ‘BBC’). During their 8 o’clock News Show one KNMI scientist even claimed that hot days are now 4 degrees warmer than they used to be. I was certain that she was stretching things, so I dug into the data. 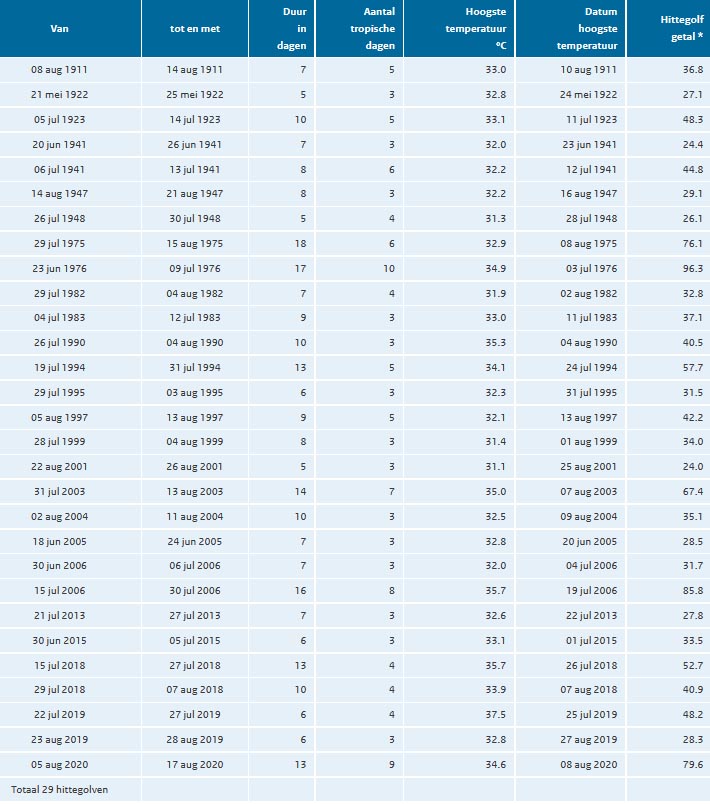 Table 1: list of heat waves in De Bilt since 1901 after homogenization.  Source: KNMI

Table 1 is copied from the KNMI website. It shows only 7 heat waves in the first half of the last century, the remaining 22 heat waves occur later. Faithful readers of this website will know what’s going on: the KNMI are using the “corrected” data from 2016. In that year, the KNMI adjusted the measured daily temperatures of station De Bilt from 1901 to September 1, 1951. Adjusting meant correcting the highest daily temperatures, “Tx”, downwards by up to 2 degrees. As a result, the period 1901-1951 became colder and the number of heat waves up to 1950 were reduced from 23 to just 7. From then on KNMI never missed an opportunity to use these adjusted temperatures to show that the number of heat waves after 1950 was much larger than before 1950. 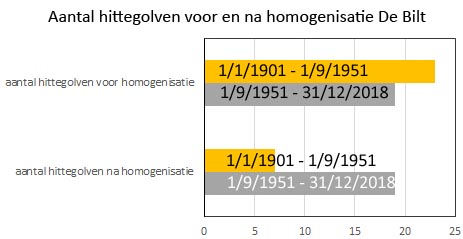 Fig.1: Number of heat waves before 1951 (yellow) and after (grey). On top before homogenization, below after homogenization. Source: Report ‘The Mystery of the Lost Heatwaves‘ (in Dutch)

Because the reduction in the number of heat waves from 23 to 7 was implausible, three other researchers and myself launched an investigation into the KNMI’s homogenization practices. This resulted in a report entitled ‘The Mystery of the Lost Heatwaves‘ (Dutch language). That could be the title of a new Tintin album, were it not for the fact that it is all real, unfortunately. 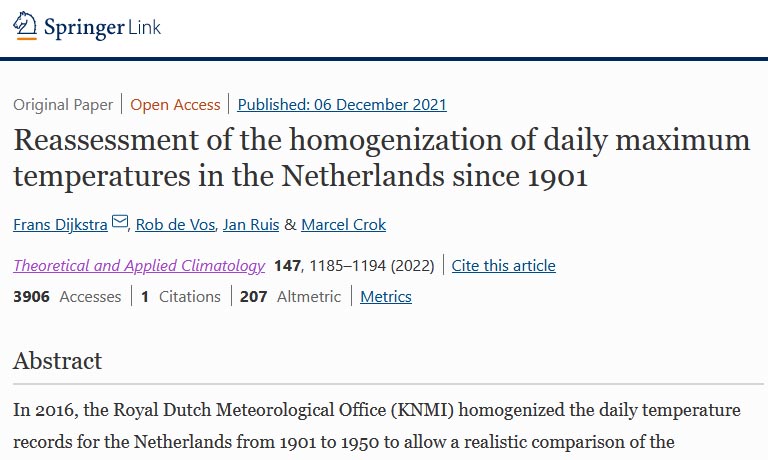 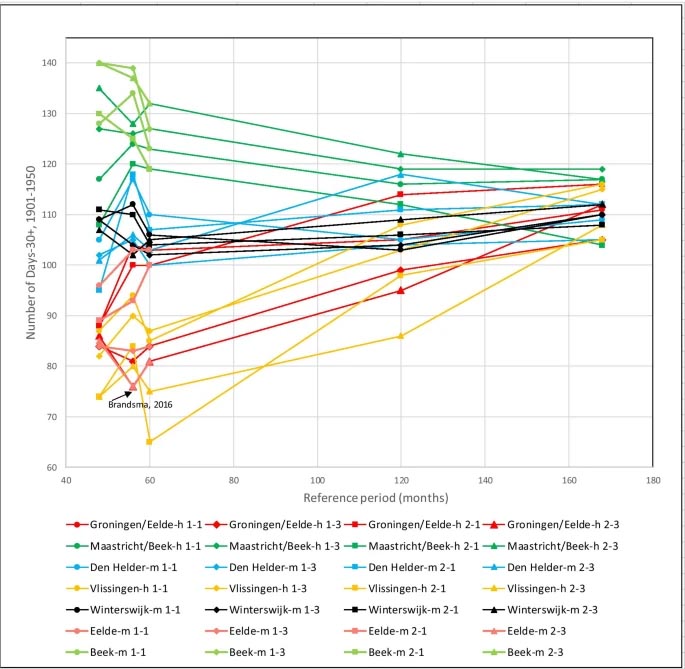 Dijkstra et al found that KNMI had made almost all the choices in the homogenization process in such a way that the outcome was assured to lead to the maximum downward adjustments in the highest temperatures. This was the reason why De Bilt lost no less than 16 of its 23 pre-1951 heat waves.

The authors of the publication requested an interview with KNMI about their findings, but this was refused.  All the traditional media in the Netherlands kept quiet about the publication, with only journalist Peter Baeten of De Andere Krant (‘The Other Newspaper’) devoting an article in Dutch to it.  He contacted KNMI and asked for a response to the publication, which was damning for KNMI’s working methods. The KNMI responded (my translation):

The new research by Dijkstra et al (2021) has been published as a scientific article and thus subject to review by external experts (peer review). We welcome more research on homogenization techniques, because many factors (instrumentation, location, weather conditions) play a role in determining correction factors. So this is a positive development, and the series can improve from that.

As we also pointed out in 2019, the development of and research into homogenization techniques is not standing still. New insights may lead to improved correction factors and thus to further improvement of the observation series. At the KNMI and at other institutes worldwide, research is being conducted into weather-dependent homogenization techniques to make the corrections even more reliable. For example, in 2022 the KNMI is scheduled to start work to develop the next version of the homogenized series. The improved homogenized temperature series are expected to be published in 2023.

This will incorporate insights from recently published scientific papers, including the recently published research by Dijkstra et al (2021). It is interesting that Dijkstra et al. did this sensitivity analysis. It shows how the number of tropical days, a difficult extreme to estimate, is sensitive to assumptions made in previous homogenizations. The study also shows that when homogenizing daily values, it is difficult to obtain reliable correction factors for the extremes. In the next version of the homogenized series, we will therefore pay more attention to the uncertainty of the corrections applied to the most extreme temperatures.

Fine words, but in the meantime KNMI apparently continues to use these incorrect temperatures in its public information campaigns, such as those about heat waves. However, to gain an accurate picture of the climatological development of extreme temperatures in the Netherlands, it is no longer credible to use these ‘corrected’ temperatures, as they have been scientifically proven to be inaccurate. 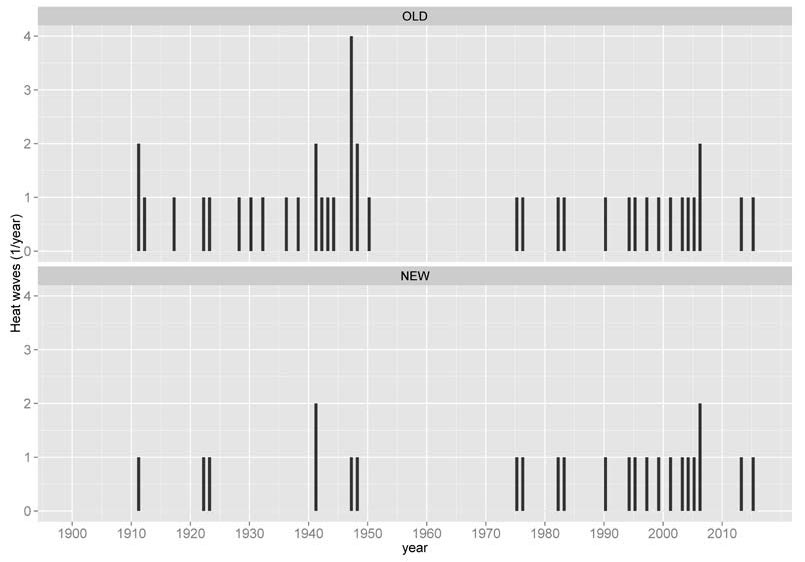 Fig. 4: number of heat waves in The Netherlands before (top) and after (down) homogenization. Source: KNMI TR356

Fig.5; number of heat waves based on the uncorrected data. Data: KNMI

Figure 5 shows the number of measured heat waves per year based on temperatures measured until 19 June 2022. It shows two periods of heat waves, from 1911 to 1950 (23 heat waves) and from 1975 to 2020 (25 heat waves). The years before 1911 and from 1951 through 1974 were relatively cool years in which heat waves were absent. This wave motion in the graph, which we will also encounter later, is a well-known phenomenon and is considered to be generated by cycles in the Atlantic Ocean and air circulation patterns.

Fig.6: number of ‘tropical days’  (days with Tmax ≥ 30 °C) in The Netherlands based on the uncorrected data. Data: KNMI

However, in the NOS news bulletin of 19 July 2022 KNMI climate scientist Karin van het Wiel claimed: “Warm days are already 4 degrees warmer than before“. In any case, those 4 °C mentioned by the KNMI scientist are not reflected in the graph of Figure 7.

I made another attempt to track down those 4 degrees from KNMI and listed the maximum daily temperature (Tx) of all 44,399 twenty-four days since January 1, 1901 in the graph in Figure 9. The linear trend here is 1.33 °C, not much different from the trend in Figure 7.

So how did the KNMI scientist come to state in the NOS news that warm days are currently 4 degrees warmer than they used to be? The answer can be found on the KNMI website. In the article with the headline “Warmest day of the year now 4 °C warmer than around 1900 ” the authors refer to the latest publication by the well-known KNMI scientist Geert Jan van Oldenborgh. In that paper this graph is shown:

Fig.10: highest annual temperature in De Bilt since 1901 and its trend based on the homogenized data. Source: Oldenborgh et al

The authors of the publication based their graph in Figure 10 on the annual Txx of De Bilt, the highest maximum temperature of each year. If you draw a linear trend line through that graph, the trend of Txx is about 3.5 °C, which was apparently rounded off smoothly to 4 °C.

In figure 7 I have done the same, namely put the highest Tx per year in a graph. In that graph I came up with no more than a linear trend of 1.2 °C over the entire period. How can that difference be explained? Simple: Oldenborgh et al used the homogenized data from KNMI. It has since been established in the scientific literature (Dijkstra et al.) that the homogenization caused the extreme temperatures at De Bilt before 1950 to be over-corrected. Unfortunately, van Oldenborgh et al. could not have been familiar with Dijkstra et al.’s publication when they submitted their paper in june 2021.

Conclusion: The KNMI is unnecessarily spreading climate fear. One of the ways it does this is by using outdated and incorrect homogenised data, which it has promised to reanalyze in the short term. With statements on the NOS news such as “Warm days are already 4 degrees warmer than before” and a headline on the KNMI website of “Warmest day of the year now 4°C warmer than around 1900“, the KNMI is ignoring recent scientific insight. Moreover, by continually emphasizing the role of CO2, it ignores other factors such as long-term natural cycles and the sharp increase in shortwave radiation in the Netherlands and Europe in recent decades. Shall we get back to ‘business as usual’ on the next warm day?

Rob de Vos is a former geography teacher at Dutch high schools who is now writing about climate change (in Dutch) on his own blog klimaatgek.nl.