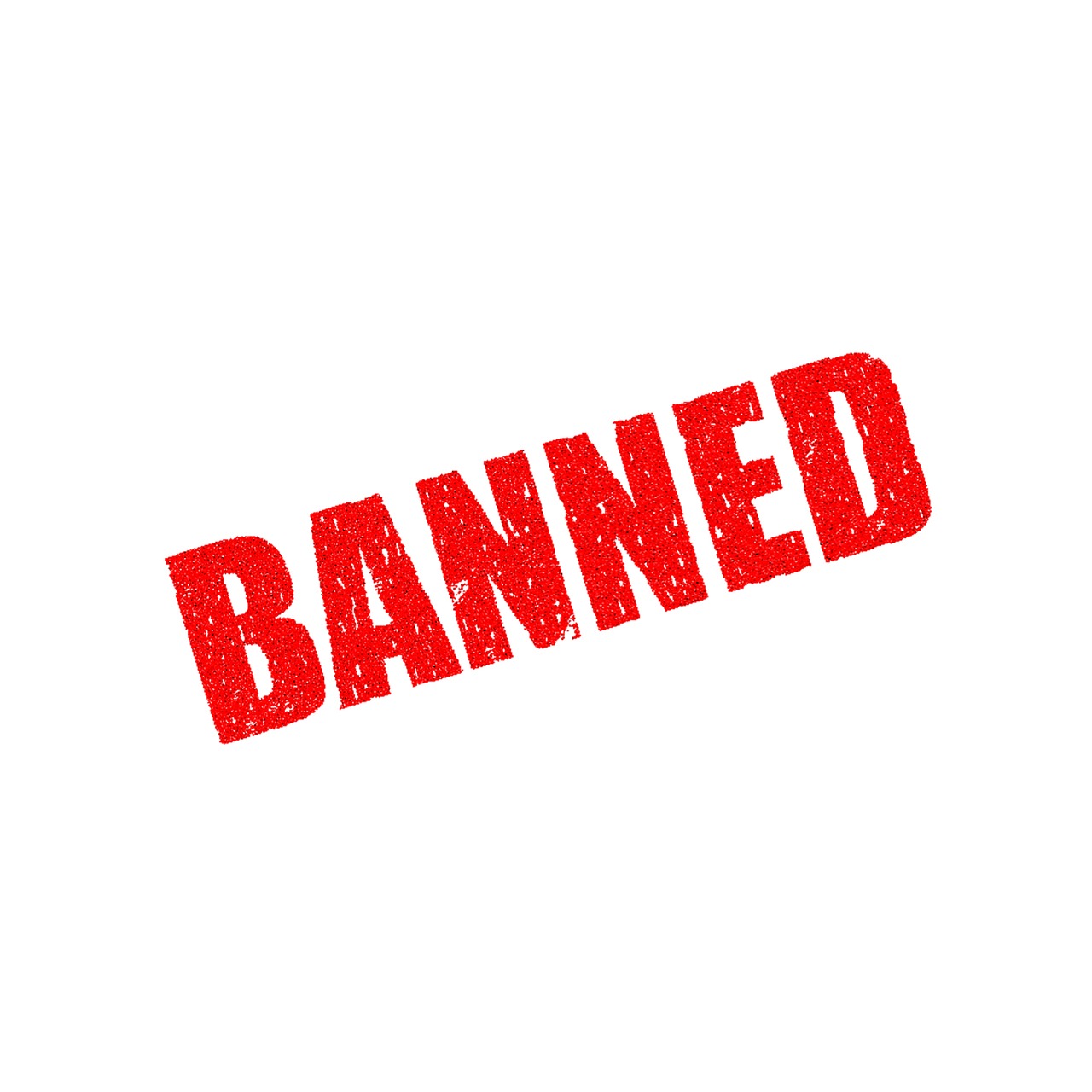 The big-tech censors are at it again: the CO2 Coalition’s Executive Director Gregory Wrightstone has been permanently banned from LinkedIn. What did Wrightstone do to earn the banishment? His “crime” consisted of posting charts from peer reviewed research supported by official sources demonstrating that current global average CO2 levels are well within the natural range of concentrations throughout the Earth’s history.

LinkedIn’s moderators sent Wrightstone an email informing him that his violations have been so numerous and/or so severe that they couldn’t allow him to continue to use the platform. A screenshot of the email and ban inducing charts have been provided by Wrightstone and are shown below. 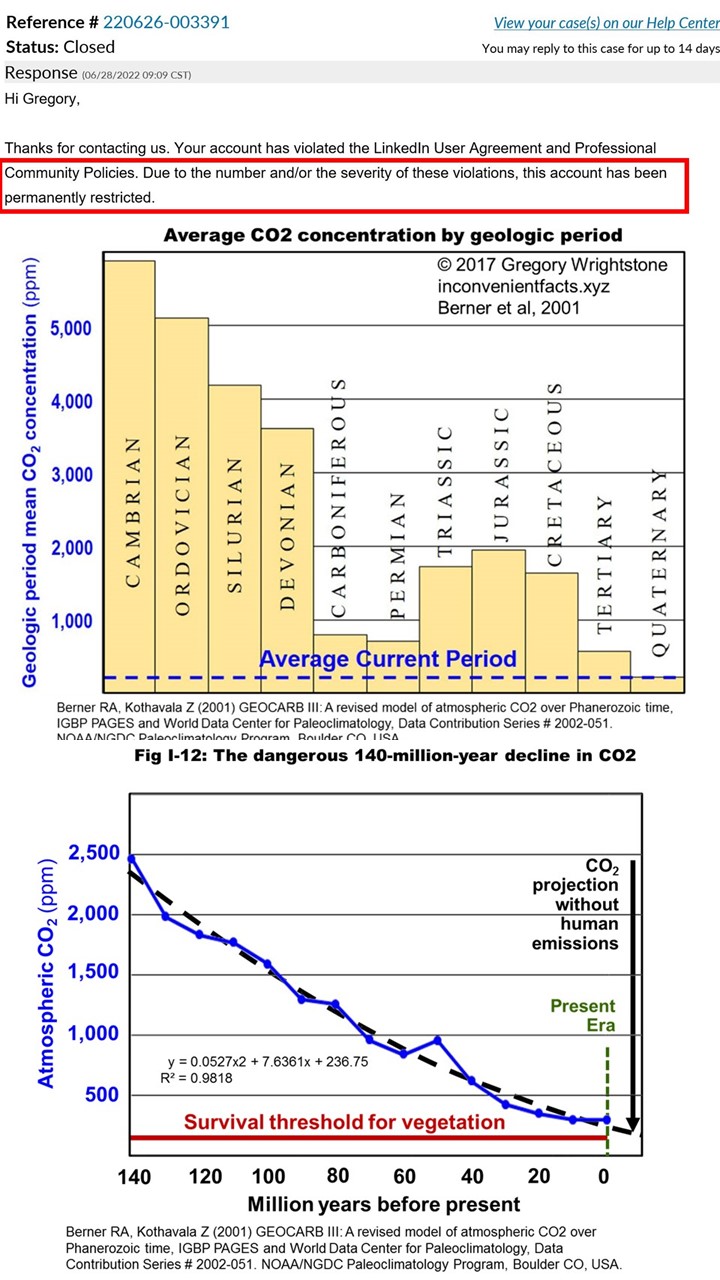 This isn’t the first time Wrightstone has been banned from LinkedIn. When Climate Realism reached out for comment, he said that around August of 2021, he noticed that his posts were being repeatedly removed by LinkedIn staff. Then in October, he received his first ban after years of posting climate information on the site. Wrightstone reports that he regularly got tens of thousands of views on his LinkedIn posts discussing climate science prior to the ban. The site’s reasoning for kicking him out was that his information is “false and misleading,” and that “this type of content is not allowed.” He only recently had his account reinstated before it was banned again.

The material I posted to Linked In was based on data that is widely accepted by the climate science community, including the U.S. Intergovernmental Panel on Climate Change (IPCC).

I was quickly growing a very large following by posting information showing the many flaws in the notion that increasing CO2 was leading to a looming climate crisis. Many of my posts showcased the many benefits of the combination of modest warming and increasing CO2 leading to huge benefits to the Earth’s ecosystems and humanity.

I was opening eyes and creating converts to climate realism. For that reason, I needed to be silenced.

What is especially interesting is that Wrightstone is what climate alarmists would call an expert climate scientist—as a 35-year veteran researcher with bachelor’s and master’s degrees in geology. He has served as an Expert Reviewer for the IPCC itself.

Worse, the data in the charts come straight from the National Oceanic and Atmospheric Administration’s (NOAA) National Geophysical Data Center (NGDC). The data has been referenced in IPCC reports. The charts generated using that data show the CO2 context of each major geologic period, allowing the average non-scientist to see that current CO2 levels are actually at some of the lowest concentrations in Earth’s history. This is not controversial stuff, or honestly debatable, it is the best available science.

So, it appears that a dataset approved and used by world governments in the discussion of climate change is off-limits if a researcher uses it to undermine the notion carbon dioxide emissions are historically high, and climate change may not be catastrophic. Historical records of CO2 in the atmosphere are important in the climate change debate as they refute any claim that current CO2 concentrations are “unprecedented,” and are therefore demonstrably dangerous to life on Earth. This truth is evidently the “type of content” that is “not allowed” by the non-scientist account reviewers at social media sites like LinkedIn and Facebook. It is the reviewers, not Wrightstone, who are rejecting the science. But they have the power as government protected social media censors. 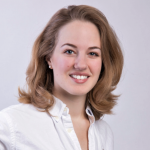 Linnea Lueken
https://www.heartland.org/about-us/who-we-are/linnea-lueken
Linnea Lueken is a Research Fellow with the Arthur B. Robinson Center on Climate and Environmental Policy. While she was an intern with The Heartland Institute in 2018, she co-authored a Heartland Institute Policy Brief “Debunking Four Persistent Myths About Hydraulic Fracturing.”
By CLINTEL Foundation|2022-07-08T14:05:50+02:008 July 2022|Climate policy, News, USA|Comments Off on LinkedIn Bans Scientist for Presenting Inconvenient Truths About CO2