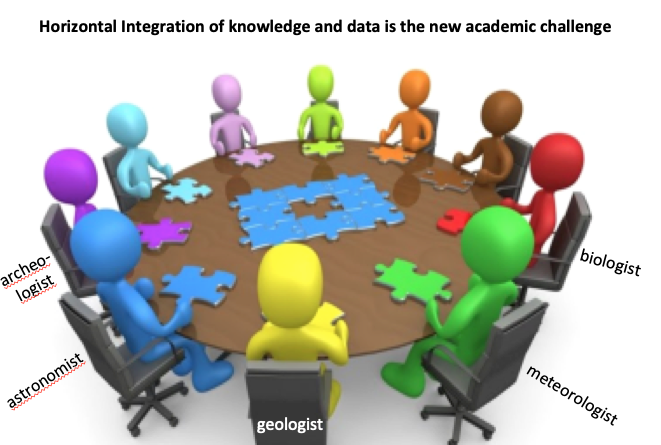 Preamble
Universities serve society by generating and passing on scientific knowledge through research and teaching. Today, universities have become a primary source of prosperity in their region. The higher the scientific level realized, the larger the contribution to prosperity. Universities, therefore, should promote excellence at all times. This means that they should not settle for followership, but aim for scientific leaders in their scientific expertise.

University professors know that the science is never settled. It is their job to continuously raise critical questions. History tells us over and over again that established theories turned out to be far from perfect or even proved to be wrong after scientists kept on challenging the prevailing theoretical models. History also tells us that the ultimate way of settling scientific disputes is to set up dedicated scientific experiments in real life. Theoretical and empirical sciences need each other.

Unfortunately, it appears that critical questions are not always welcome. For instance, alternative views may not be in the interest of the private and public bodies that finance the university. Think also of ideological and political groups that are eager to force their ideas on the university community. To exert pressure on researchers to stop the investigation of alternative theories or, even worse, to exert pressure on scientists to stop asking critical questions (‘cancel culture’), is killing scientific progress. Universities should stay far away from such unscientific  – often concealed – censoring practices.

Universities ought to be scientific communities, where ‘Freedom of Speech and Inquiry’ are by no means negotiable. This constitutes the prime responsibility of university governors and executives. They must protect their professors and students from outside influences that attempt to limit these two fundamental scientific freedoms. It is interesting that there exist many codes of conduct for university professors and students, but little can be found for the modern university leadership, who increasingly has to cope with vigorous nonscientific forcing. This forcing is of a supranational nature and poses the major menace of the academic integrity in our time. CLINTEL has set up such a code, meant as guidance for governors and executives and as protection for doubters and dissenters. Actually, the code is a modern version of the 1988 Bologna Declaration of European Rectors and fits the specific challenges of today.

Statements of the Magna Carta Universitatum

The history of science shows that new insights do not come from followers but from doubters and dissenters. Not followers but doubters and dissenters make history in science. Think of giants such as Copernicus, Galileo, Newton, Gauss, Curie, Einstein, Watson, Crick, Wilkins and Hawking. They all looked critically at the prevailing consensus and dared to take a different path. Progress would not have been possible without them. This is an important lesson for today, where criticism and alternative concepts are not always welcome or sometimes even suppressed. It comprises a serious academic misconduct, which violates one of the two fundamental principles of natural justice: “AVDIATVR ET ALTERA PARS” (let both sides be heard).

Climate example: Within established climate science, curiosity and diversity are being suppressed and the anthropogenic global warming (AGW) hypothesis is ruthlessly enforced. Despite pressing scientific, economic and social grounds for questioning that hypothesis, any scepticism is considered as unscientific. Censorship complicates and all too often prevents the publication of critical articles in peer-reviewed scientific journals. Even worse, professor Peter Ridd, an expert on coral reefs, showed that several unsound peer-reviewed scientific papers falsely assert that climate change is killing the Great Barrier Reef. His university fired him after decades of service. He is not the only victim. Professors that criticize the AGW are excommunicated.

2. The complexity of multi-factor, multi-scale systems demands the input from a wide range of scientific fields and disciplines

In the past 150 years sciences have primarily invested in segmentation and specialization. The new academic challenge is to make a horizontal connection between the large amounts of vertically organized knowledge reservoirs. Experiences show us that without lateral integration we will not be able to solve the big problems mankind is coping with today. Think of the sectors health, education, inequality and environment, where everything is connected with everything and segmentation leads to an illusory world.

Climate example: Changes in weather and climate have a wide variety of causes, natural as well as anthropogenic. True integration of knowledge from many scientific fields, such as astronomy, geophysics, geology, archaeology, meteorology, oceanography and biology, is indispensable to a full understanding of the complex causal relationships that underlie climate change. This is hardly the case in today’s mainstream climate research. Knowledge areas that show the natural variability of the earth’s climate are ignored.

Breakthroughs in science are generally initiated by the availability of improved measurement systems. These systems provide researchers with new and reproducible observations. Think of the spectacular improvements in microscopy and the capability of modern telescopes. Think also of the innovative LOFAR antenna network, which has already discovered thousands of unknown galaxies. And, very recently, think of the Large Hadron Collider that confirmed the Higgs boson. The more complicated the system we study, the more important are the measurements for the verification of the theoretical assumptions as well as the validation of the modelling output.

Climate example: Unfortunately, mainstream climate science is more interested in models than in measurements; model-makers are running the show. In the very complex climate issue, however, new measuring systems should have the highest priority as a yardstick to verify the validity of the mainstream climate models. Until today, model predictions are very different from real observations, meaning that climate policies cannot be based on models.

4. Leaders of universities should protect their scientists from political ideologies; separation of science and politics is a great good

Science is searching for the ‘truth’, even if we may not like what the ‘truth’ is telling us. Scientific decisions come from observation and ratio. Politics works completely different as decisions come from consensus. Decisions from consensus comprise two ancient logical fallacies – of appeal to pure headcount and of appeal to imagined authority (argumentum ad populum and argumentum ad verecundiam). The statement that “the science is settled” is an assertion of imagined consensus deployed by climate activists as a substitute for science.

Climate example: The political wish list of the Paris Climate Accord in 2015, which has set the climate agenda for decades, is based on the false statement: ‘The Science Is Settled’. However, the truth is that the science is not settled at all. We have little idea of how much or how little mankind is contributing to global warming. We also do not know whether, or to what extent, warmer worldwide weather will be net-harmful or net-beneficial. Already for decades climate models fail to make predictions that match reality.

5. Leaders of universities have a moral responsibility to warn society that conclusions from questionable scientific models must be distrusted

Society expects that science plays a major role in solving the big problems on our planet. Therefore, it is of utmost importance that the scientific community is honest about the limitations of their theoretical models. Even more so, the scientific community should be honest about the (in)capability of mankind to subdue natural variability. Universities should start to resist the absurd “green engineering” agendas of supranational organizations. To think, for example, that we can control the complex processes of weather and climate in the macro-world and of the mutation of pathogens in the micro-world is as naive as it is arrogant. Let universities not behave as though they were present-day Don Quixotes.

Climate example: So far, climate models have proven unable to make reliable predictions of global warming. Therefore, their predictions are not a sound basis for making government policy. The implementation of climate policies is costly. They have major consequences for society. More specific, IPCC’s predictions about extreme warming and sea-level rise have caused much fear and unrest in the world. As today’s climate policy is based on these false model predictions, the existing energy infrastructure is unnecessarily being demolished with imprudent haste.

Finally, academic leaders should bear in mind that universities ought to be centers of new ideas and delivery rooms of new talent. This requires an inspiring research and teaching environment, where new concepts are welcomed and ample room for experimentation is provided. The filtering out of bad ideas should be done by exposure, argument and observation and not by trying to silence creative minds. And, to repeat the key message at the start: “Universities should promote excellence at all times.”