The Great Climate Debate of 2022

Today, humans are spending more than $1 trillion each year on decarbonization and renewables. A recent McKinsey study claims we’ll need to spend 9.2 trillion per year for the next 30 years. Governments are spending hundreds of billions on research. This is all based on “settled science” promoted by the United Nations and World Economic Forum without proper scientific scrutiny.

Is the science really settled?

Is science ever settled?

Is, as the New York Times claims, $3.2 trillion a pittance?

Should we maybe double-check the assumptions before we throw billions of people into energy poverty?

Please help me realize this by connecting me with possible sponsors.

There will be opposition to a debate. That is precisely why we need one.

The science of climate change is not settled, as evidenced by the many books, blogs, videos, and papers on the topic. I assume the reader gets most information from the popular press. To counter that, please see these resources:

My videos, and a long list of other scientific videos, papers, and blogs on my site, ClimateCurious.com. Many of the authors are former IPCC lead authors and committee members, or were department heads and high-profile academics until they were targeted, attacked, and fired from their academic jobs.

One highlight is the book Unsettled, by Steve Koonin, who was Under Secretary for Science, Department of Energy for the Obama administration and is now director of the Center for Urban Science and Progress at New York University.

We live in a time of scientocracy. Peer-review is not what we think it is. Governments have corrupted scientific research. To-date, there have been almost no debates. The only debates I know of are:

Science is the belief in the ignorance of experts.
— Richard Feynman

I’m looking for a fair debate on the merits, on the data, on critical thinking, not on grandstanding, hyperbole, repetition, and institutional name recognition. I propose an online debate between anthropogenic global warming (AGW) alarmists and AGW skeptics. It would take place over two months along the following loose guidelines:

The debate would be made available as a set of videos on its own website.

It would be conducted on Zoom.

It would be chaired and moderated someone independent and media-savvy. For example:

There would be a panel of experts who are trained in decision science, statistics, and critical thinking. These experts would be paid and would be sworn to render a neutral opinion without previous biases. In all, there should be about ten experts — an even number — with the same number biased toward vs against AGW and the remainder neutral. I would work with the moderator to put this panel together. A list of potential experts:

There would be two committees of three people chosen to head up and organize the debate: one committee on each side. Those six people will be responsible for organization, choosing people to present, managing documentation, schedule, etc. They will also be paid for their work.

The format would be one day per week for six weeks, where each day is dedicated to about 4–6 hours of debate on these five topics:

The two committees will be given equal amounts of time for presentation and argument, generally 90 minutes each, alternating 15-minute time slots with a short break half way through. Then there would be 1–2 hours of questioning by the panel of experts. During this time, the presenters speak only to the panel, not to opposing presenters.

At the end of each day, the two sides have 10 minutes to summarize their position, taking into account the arguments they have heard from the other side.

Each week, the panel of experts will independently write up their impressions and conclusions from what they learned in that week’s debate. They will submit summaries of their conclusions in writing separately, without communication, to the chair at the end of each week.

After all six weeks, there is a seventh day, in which each side has 30 minutes to present its case relative to everything discussed so far, and then 2–4 hours of questions by the panel.

After the seventh session, the panel of experts, which includes the moderator, will each submit their overall summaries and short summaries of each session independently, without knowing the others’ summaries. They will also vote independently, using range voting to answer the questions:

Then they will meet to discuss the evidence among themselves — sort of like a jury does. After this meeting, they will craft a joint short statement that includes the conclusions reached by all experts individually and as a group. There can be majority and minority opinions. The moderator will read this document out loud in an 8th and final session, and any experts who want to comment may do so. This 8th session is a conversation among the expert panel members only.

Select journalists would be invited based on their ability to be neutral, attend all sessions, and their degree of statistical literacy. We may need to hire an outside group to choose these journalists, or I can do it with the moderator. The journalists may be paid by their employers or we may pay them if they are independent. Journalists must declare their previous biases, any biases by their employers, and commit to covering both sides fairly.

There would be a press embargo during the debate, to avoid sensationalizing the weekly sessions.

There will be some kind of press event after the 8th session. It could be an open Q&A with the panel members and the chair.

Members of the press may interview presenters or experts on their own time after the 8th and final session.

The sponsoring institution would commit to promoting the debate and the results as widely as possible, and ensuring fairness in reporting. This involves a website dedicated to the debate and its results.

The staff would be:

The prize is to compensate the presenters for their time and to help draw attention to the debate. The prize should be enough to make a splash. Something like $50,000. The money is awarded according to the results of the panel voting on the first question only, because the first question is based on data, not projections. It could be 100 percent for one side, or an 80/20 split, 50/50, etc.

This is the budget I propose: 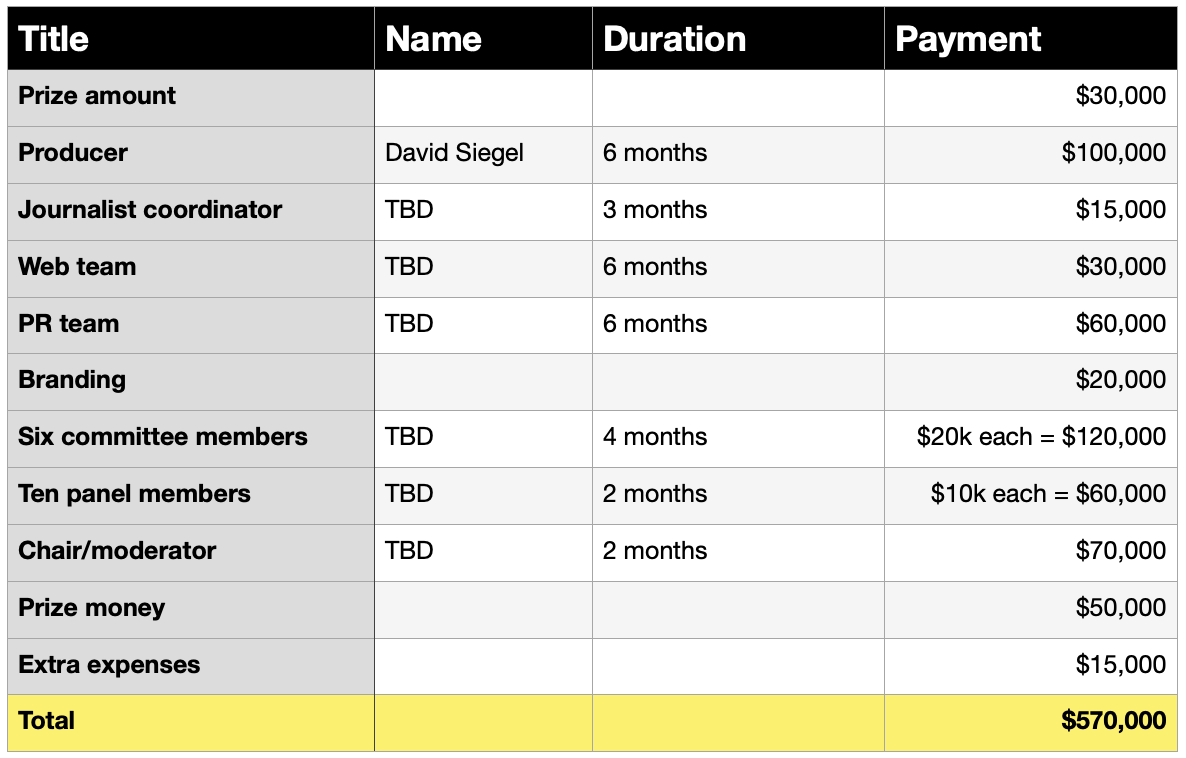 I am looking for sponsors. I want complete dedication to neutrality and honest reporting. We should not care about the outcome, only the process. I’m looking for one or more sponsoring organizations brave enough to ask the hard questions and learn along with everyone else, looking for the truth and the science driving trillions of dollars of decarbonization now.

The big problem is that the IPCC, NASA, and NOAA are unlikely to want to participate. These are politically driven organizations. They have refused many debate offers in the past. A debate on the science is not in their best interest.

Once we set up the budget and sponsors, we will work with a good PR firm and our network to invite the other side. If they refuse, that message will be made public. If we can get over this problem, we should be prepared for many new revelations in the world of climate science that people didn’t know before. We should be prepared for news organizations like the New York Times to distort the results. Most news organizations make good money when they tell people the world is going to end — it sells advertising. They are not neutral. Many people make a living now on decarbonization and don’t want it to go away.

There will be opposition to a debate. That is precisely why we need one.

On the other hand, precious little money goes from fossil fuel companies to researchers and people like us at the CO2 Coalition. Almost none. We are all volunteers trying to find the truth. If they win the debate, we will have to admit that our arguments were unconvincing and will need to look again at where we think the science really is. We don’t mind. We want scientific integrity to win over politics.

A second problem: this event will be attacked by fringe groups and those who make money in the decarbonization economy. We must work very hard to ensure scientific integrity. While I am qualified to produce the event, they will attack me as not being neutral. However, that is not the case. My first book was alarmist. I had to study hard to realize what the IPCC was doing and change my mind. They won’t appreciate this. They will use labels and smear tactics. We must work with the PR company pro-actively to make sure we are open and nothing is going on behind the scenes.

This is strictly a scientific debate on the past and predicted effects of human-added CO2 to our climate. Future debates could be held to investigate renewable energy, fossil-fuel energy, ozone depletion, plastic pollution, ocean and rainforest health, nuclear energy, energy policy, and other topics.

If you think this isn’t important, look at Sri Lanka today.

One side is lying. Let’s find out which side and get to work building resilient economies that take care of their poor.

I welcome a discussion with any potential sponsors who may be interested. If it goes well, we could take on many other controversial and important scientific and economic topics.

This debate will be an important moment not just for the environment but for science.

If you want to help, you can. Just forward the URL of this page to anyone who might be able to help me find sponsors.