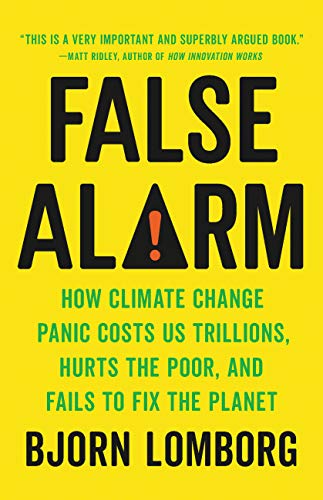 For many years, the Danish economist Bjorn Lomborg has bravely contested the lie that a “climate apocalypse” is the greatest threat to humanity. He correctly points out that humanity faces much more serious problems than climate change. Much of the world’s population is trying to cope with real problems such as hunger, disease, a lack of economic opportunity, and a lack of access to clean water or electricity. The world could solve these real problems for a fraction of the cost of “fighting climate change,” which probably is not a problem at all. We can be thankful for Lomborg’s recent book, False Alarm, an excellent summary of the madness, hypocrisy, and cynicism of the climate-alarm establishment.

Lomborg is right that hysteria over climate change is a “false alarm,” a “singular obsession” that

means that we are now going from wasting billions of dollars on ineffective policies to wasting trillions. At the same time, we’re ignoring ever more of the world’s more urgent and much more tractable challenges. And we’re scaring kids and adults witless, which is not just factually wrong but morally reprehensible.

But he is wrong to insist that “climate change” generally, and increasing levels of atmospheric carbon dioxide specifically, are problems that need solving. To cite a few examples of this peculiar delusion, on page 37 we read, “Yes, global warming is real, and it needs our serious attention.” Section 4 is entitled “How to Fix Climate Change.” On page 171, we find “Yet if we can innovate the price of green energy down below that of fossil fuels, we will be on the pathway to fixing climate change.”
In the closing remarks on page 221, we get this sop to conventional wisdom, “We definitely need to address global warming—it’s a real problem.” But these are assertions of religious dogma, not scientific facts. Lomborg makes no serious attempt to explain why “it’s a real problem.”

It is puzzling that an intelligent person like Lomborg has signed on to the dogma that the climate needs fixing. In reality, climate alarmism is the latest version of Plato’s “noble lie,” promoted in our generation to protect and extend the privileges of the Davos elite and elite wannabes. Perhaps his fellow Dane, Hans Christian Andersen, put his finger on the reason in his classic tale of the emperor’s new clothes. As the purveyors of these imaginary clothes explained to the vain emperor: “Not only were their colors and patterns uncommonly fine, but clothes made of this cloth had a wonderful way of becoming invisible to anyone who was unfit for his office, or who was unusually stupid.” Who wants to be perceived as unfit for office or unusually stupid? But this is only part of the price you must pay if you express public skepticism about the alleged threat of climate change.

The climate-alarm enterprise has been remarkably successful in persuading scientifically illiterate people, many well-meaning, that there is a climate crisis. A global elite, with members ranging from preening billionaires to narcissistic academics who should know better, wring their hands over the supposed threat of global warming. They bemoan the fact that evil “deniers” are unwilling to surrender their freedom to save the planet. Some have suggested that “deniers” should be tried, jailed, or even executed.
If challenged to back up their hysteria, most alarmists will say something like “I am not a scientist, but 99 percent of scientists agree that we are all going to die from climate change.” How should we respond to this alleged scientific consensus?
General McAuliffe provided the right answer: “Nuts.”

In his farewell address to fellow Americans in 1961, President Eisenhower warned:

The prospect of domination of the nation’s scholars by Federal employment, project allocation, and the power of money is ever present and is gravely to be regarded.
Yet in holding scientific discovery in respect, as we should, we must also be alert to the equal and opposite danger that public policy could itself become the captive of a scientific-technological elite.

Eisenhower was prescient. Climate alarmism is promoted by a well-paid “scientifictechnological elite.” They get lots of help from many others, who benefit from government actions taken to “combat climate change” but who have no scientific knowledge. The real problem is not climate change, but stupidity, groupthink, greed for money, greed for power, and so on. Age-old flaws of the human character are disguised as concern for the planet.

There is little evidence that the climate needs fixing, even if that were something humans could do. To teach fawning courtiers a lesson on the limits of elite power, another Dane, the tough old Viking King Canute, commanded the tides to stop.
The tides did as they pleased, much to the embarrassment of the courtiers. The climate will continue to change, as it has throughout all of geological history. But in Chapter 14, “Geoengineering, a Backup Plan,” Lomborg approvingly discusses schemes to stop climate change by artificially loading our blues skies with real pollutants—like sulfur dioxide of acid-rain notoriety. Talk about a cure that is worse than a non-existent disease!

Increasing levels of carbon dioxide have already led to a substantial greening of the Earth, and have contributed, along with good farming practices, to the spectacular increase of agricultural yields around the world. Much of the modest warming over the past century is likely a continuation of the natural rebound of temperatures from their lows in the Little Ice Age (ca. 1300–1870) that caused so much misery around the world and which helped to drive Norse farmers from once-clement southern Greenland.

Changes of CO2 concentration make little difference to the energy Earth radiates to space. If you could suddenly double the concentration of CO2 you would decrease the average thermal radiation to space—around 250 watts per square meter)—by about 1%. A huge change of CO2 concentrations, doubling, would cause a very tiny change of flux. And the small flux change would cause an even smaller change of temperature, about 1˚C. This modest temperature increase would almost certainly be beneficial to life on Earth. The local warming will be greater near the poles than near the equator, and greater at night than during the day. Observations strongly suggest that alleged positive feedbacks to the direct warming effects of CO2 are much smaller than claimed. The feedbacks may well be negative. An old joke about scientific theories is all too true for climate science: “Getting the sign right is the hardest thing!”

Sea levels are rising at the same rate as a century ago; extreme weather is not increasing; none of the lurid predictions of a climate apocalypse have shown any sign of happening. And yet the media gulls us with incessant climate gloom.

Lomborg has a misplaced faith that governments, spending money extorted from taxpayers, can solve every problem, including the non-problem of greenhouse gases. On page 170 he states “The technology of fracking has been around since at least 1947, but it took public resources to the tune of hundreds of millions of dollars from the U.S. Department of Energy and perhaps $10 billion in tax credits for private enterprise to innovate procedures to frack gas profitably.” In fact, the United States government, and big oil companies, had almost nothing to do with the development of fracking. Much of the credit belongs to George Phydias Mitchell, the Texan son of Greek immigrants. In the face of many obstacles and dry holes, Mitchell’s independent oil company stubbornly refused to give up and finally made fracking a success.

One of the most disgusting tactics of the climate-alarm establishment has been to terrify credulous children. From time to time I get anguished emails from young people who don’t expect to reach adulthood because of impending climate doom. It does not help to point out the complete lack of scientific support for alarm. Children have been brainwashed to believe that greenhouse gases will soon destroy life on Earth. They have not been taught how to think for themselves.
In his introduction, Lomborg cites the sign held by a young girl:

The book has a good bibliography, including internet links that work. Despite mistaking increases of beneficial carbon dioxide as a problem that he and other global elites must solve, Lomborg has done an excellent job pointing out that climate fears are indeed a “false alarm,” misdirecting time and resources away from real, and soluble, problems. 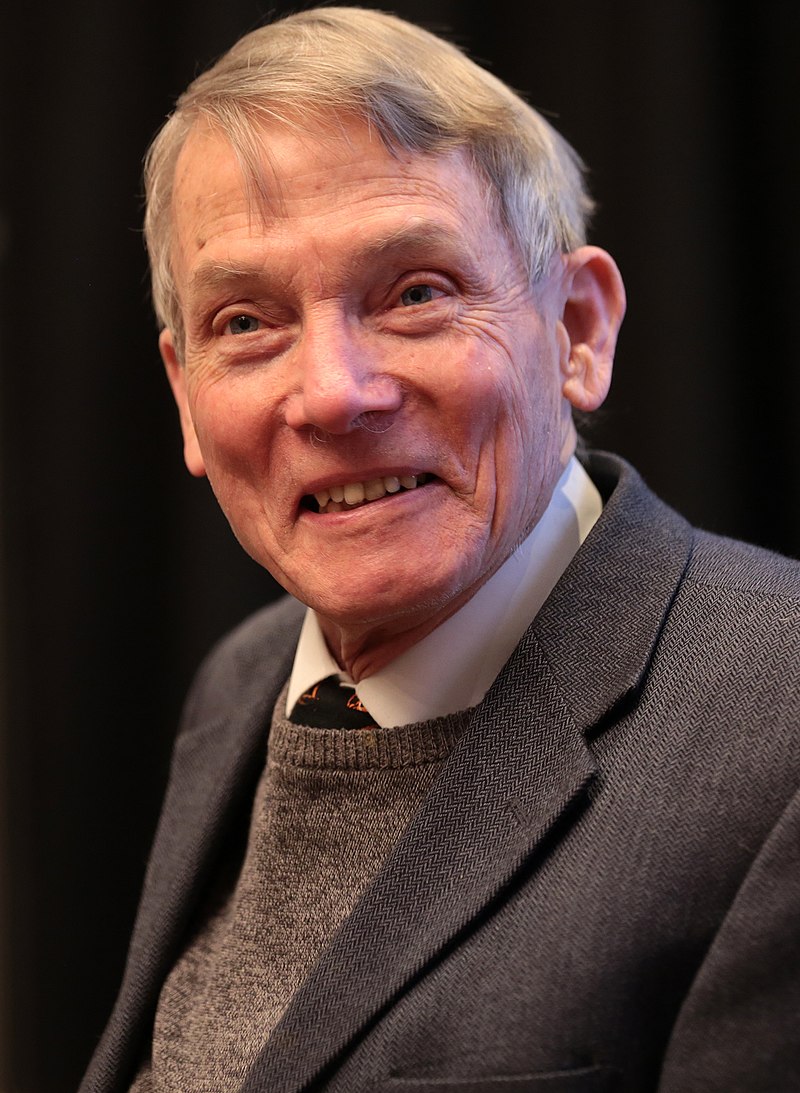 William Happer is the Cyrus Fogg Brackett Professor of Physics, Emeritus, in the Department of Physics at Princeton University. A long-time member of JASON, a group of scientists which provides independent advice to the U.S. government on matters relating to science, technology, and national security, Happer served as Director of the U.S. Department of Energy’s Office of Science from 1991–1993.

Best known to the general public as a vocal critic of the U.N. IPCC “consensus” on global warming, he has been called frequently to give expert testimony before various U.S. congressional committees on the subject of global warming (climate change).