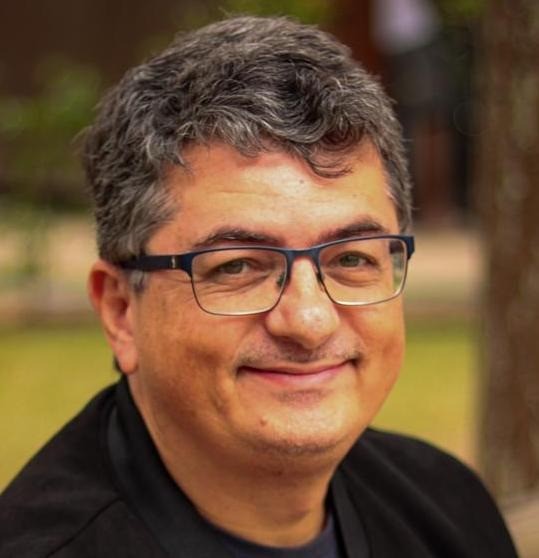 What is your background?
I am an oceanographer and have a PhD in biological oceanography. I have taught disciplines in the area of ​​oceanography, fisheries, science philosophy and education for undergraduate and graduate courses at the university where I work (UFES). My research has been mainly about assessing the impact and potential of fishing on ecosystems and society, the use of marine megafauna (dolphins, whales, turtles, birds) as indicators of ecosystem health and priority areas for conservation. Recently I have begun investigations into the effects of climate change on long-lived megafauna species and on coral reefs.

Since when and why are you interested in climate change?
My interest in the area dates back to the early 1990s, while I was still a graduate student, when I found out that there was a proposal for a planetary geoengineering mega-project aimed at fertilizing the South Pacific Ocean with iron to stimulate the biological pumping of carbon to the bottom of the oceans aiming to reverse the effects of global warming. I found the proposal as fascinating as it was frightening. Later, already in the early 2000s, I was teaching one of my courses called ‘Oceanographic Processes’ in which one of the topics of study was the carbon cycle in the oceans. One of the textbooks used to conduct studies on the subject mentioned that the carbon derived from human emissions was negligible compared to all other natural inputs and, in any case, the oceans absorb all the surplus. This statement was contradictory to all the alarmism that already existed about climate change at the time. This spurred me on to want to know more about the subject.

How did your view on climate change evolve?
In 2007, I watched the documentary ‘The Great Global Warming Swindle’ produced by Channel 4 in England, which ended up arousing my curiosity and confirming several suspicions I already had about the integrity of the theory about the climate reported by the media. Since then I have deepened studies on the subject in order to confirm or not the controversial claims of the documentary. In general, I ended up confirming much of the information in the film and with the evolution of science on the subject, more and more evidence appeared that the current theory, disseminated by the IPCC and the media, has major flaws. I am currently concentrating my studies on an aspect that I consider really important and decisive, which is how the greenhouse effect works. Recent studies derived from empirical evidence of planets and moons in the solar system, as well as experiments have shown that this mechanism has nothing to do with the type of gas that makes up the atmosphere, but with the density of the gases and/or their height.

Is climate change a big problem in your country and how do you perceive it?
Yes, in my country it is perceived as a big problem by many influential people in society, including politicians and the media. As a consequence, many people end up seeing this as a problem as important or more important than really serious issues, such as poverty, inequality, destruction of ecosystems and pollution.

What would climate policy ideally look like in your opinion?
My climate policy would have four lines of action, involving the area of ​​research and ​​public policies. In research, it would stimulate the debate and funding of investigations into the causes and consequences of the global climate without the bias promoted by the IPCC, giving voice and opportunity to all alternative views. It would also fund research on truly alternative sources of energy that are efficient, regular, cheap and without waste, especially nuclear fusion. This financing would obviously not be to mitigate global warming, but to reduce dependence on fossil fuels as they are a non-renewable source of energy and have polluting by-products. It would reduce subsidies to expensive and inefficient energies such as solar and wind, using these resources to promote research into these energy sources. In the area of ​​public policy, it would expand climate monitoring and extreme events, aiming to identify the greatest risks as a basis for a climate policy based on adaptation and not mitigation, since it is clear that the reduction of carbon dioxide will have no effect on the climate.

What is your motivation for signing the Clintel World Climate Declaration?
My motivation was to join and strengthen a group of researchers and professionals who had the courage to question an institution as powerful as the IPCC, the UN and the governments of several very influential countries, in addition to contributing so that these countries, institutions and humanity as a whole can finally recognize that the global climate is something extremely complex and its functioning cannot be reduced to the effect of the emissions of a gas in the atmosphere that represents a tiny fraction of the ocean/atmosphere system that controls the climate. The strengthening of the group also represents hope for those who condemn alarmism and the use of trillions of dollars in questionable public policies based on a scientific theory with so many conceptual and empirical flaws.