Chile has huge hydroelectric power potential, were it not for misguided environmental policy

For some years now, we have followed the work of Douglas Pollock, a civil industrial engineer from the University of Chile, who shows what happened in his country when it followed the sort of climate and energy policies now being promoted by President Joe Biden. Pollock has written widely in his country, and spoken at conferences around the world to explain the devastating economic impact of Chile’s wrong-headed policies. His efforts to warn institutions about the unnecessary harm that fighting climate change is causing resulted in his views being banned in Chile and throughout Latin America. Thankfully, Americans can still hear his cautionary tale. “Please don’t follow Chile!” warns Pollock. “Chile is no longer the thriving country it was until the early nineties.”

In his presentation at the Dec 3, 2019 conference of the Arlington Heights, Illinois-based free market think tank, The Heartland Institute, Pollock gave a Chilean history lesson that should send chills down the backs of anyone concerned about the long-term impacts of Biden’s climate change plans. Held in conjunction with the 25th Conference of the Parties (COP25) to the United Nations Framework Convention on Climate Change (UNFCCC), Heartland’s event gave Pollock the opportunity to demonstrate what happens when a country goes hog-wild on climate policy. He showed a slide which said “Chile has become the world’s most important emerging country for its outstanding climate behavior,” the former president Bachelet won the UN’s “Champion of the Earth” award in December 2017. Chile is “the cuddliest cuddly toy to the UN,” said Pollock. “What an honor!” he concluded sarcastically.

Pollock explained that things started to go awry in Chile when, between 2006 and 2010, ministries of energy, environment and a superintendent of environment were formed. Then sensible and cost-effective energy sources started to be curtailed, while wind and solar power were boosted. In particular, Pollock spoke about two major energy projects (see table below), a 540 MW coal station, cancelled in 2010, and a 2,750 MW hydro project, cancelled in 2016. After three years of bureaucracy, the coal project had already passed all environmental reviews but was cancelled by then-President Sebastián Piñera. The hydroelectric project was by far the world’s most efficient. Yet, after seven years and $250 million in bureaucratic machinations and trials, it too was finally repealed by then-President Michelle Bachelet.

“If it had been built, since 2018, that single plant would represent today more than 45% of the national hydroelectric generation and more than 55% of the entire generation would come from hydroelectricity, the cheapest, the cleanest, the most stable and fortunately the most abundant [energy source in Chile].”

Instead Bachelet announced the construction of two power plants—wind and solar—as indicated in the table below, boasting that they would supply 70% of the power for Santiago’s subway. Concerning the project, Pollock cited the president:

“She said, ‘[This is the only project like this] in the entire world.’ She was right because I don’t know of any other country on planet Earth having done such nonsense. Electricity costs for the subway rose 210% from $47.6 to $100 per MWh.”

Even worse, in 2021, the 210 MW Cerro Dominador combined concentrated solar power and photovoltaic plant was commissioned, the electricity from which, Pollock forecast, would cost 25 times as much as the cancelled 2,750 MW hydro project. Overall, he explained, the new wind and solar projects were expected to produce electricity eleven-times more expensive than the cancelled conventional power plants. With these sorts of decisions, it is not surprising that, as illustrated by the following graph from the International Energy Agency, Chile, in 2019, had one of the highest industrial electricity rates in the world, not a particularly attractive calling card for businesses. 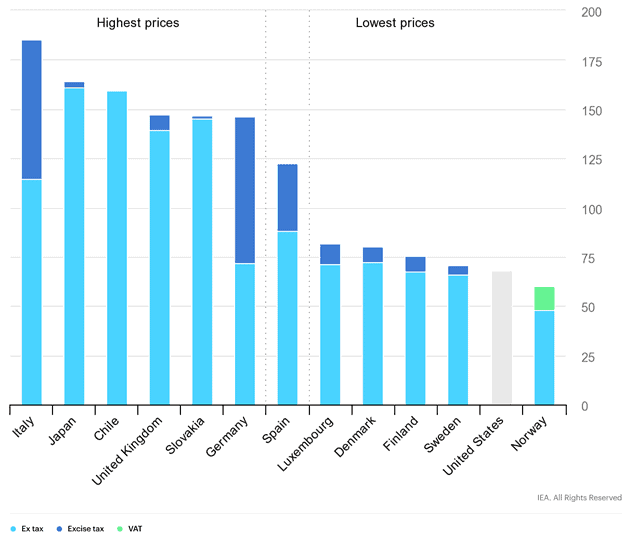 It was not long after Chile started down this dangerous path that citizens were hit by carbon taxes and fuel taxes. This led to government subsidies and a vicious cycle with more and more taxes to finance them, leading to huge increases in energy costs and, therefore, in everything else. Pollock then showed the following graph, demonstrating the plunge in GDP and competitiveness with rising tax rates: Pollock told the audience in Madrid about the impact of all this in Chile:

“Negative consequences for the economy [included] loss of competitiveness, a severe decline in economic growth, abrupt investment brake, capital flight/industrial exodus, increase in the cost of living, reduced purchasing power and consumer surplus, unemployment, wealth-poverty gap increase, and the vicious part, where the poor get even poorer.”

How’s that for a future for America under the Biden plan? Pollock continued:

“Environmental damage such as massive bird and bat killing, huge land use, and neodymium mining with its inherent radioactive waste. School political indoctrination or brainwashing always with guilt, fear, and … loss of degrees of freedom or sovereignty. And all for what? For nothing. No declining greenhouse gas emissions and no impact on global warming whatsoever.”

“So, let’s see now what has been Chile’s achievement to save the planet. No declining greenhouse gas emissions and no impact on global warming whatsoever.”

And indeed, as the following graph illustrates, that is exactly the case. The impact on so-called global temperatures, Pollock explained, of Chile’s climate plans would be 0.0000115 degrees C per decade. It is completely pointless for a country the size of Chile to adopt any mitigation measures whatsoever “to prevent climate change,” even if humans did significantly impact our climate, which we most assuredly do not. After all, carbon dioxide (CO2), the gas climate alarmists are most concerned about, is a colorless, odorless, innocuous, non-polluting gas vital for plant and animal life on Earth. It cannot be, and has never been in the history of the planet, the driver of atmospheric temperature increase. For many reasons, it follows a logarithmic behavior such that, at much lower concentrations, this gas already generated essentially all increases in temperature that it is capable of. A doubling of CO2 in the atmosphere will have essentially no effect on the earth’s “global temperature.”

A wonderful impact of higher CO2 emissions has been the increased “greening” of the Earth’s land by 15% between 1982 and 2014. The Sahara Desert has retreated by 300,000 Km2, three times the area of the Atacama Desert in northern Chile. Consequently, in the last 50 years, humanity is using 68% less land to grow the same amount of food thanks to the use of fossil fuels, and the CO2 level rise from 300 to 400 ppm.

Regardless, Chile’s contribution to humanity’s CO2 emissions is an imperceptible 0.2% of total emissions. Yet, Chile, like many other countries, is all but destroying their economies with policies that limit the use of reliable fossil fuels and instead require “unreliables” like wind and solar energy. And they are getting nothing from their expensive policies anyways: once one takes account of the emissions from the manufacture of windmills and solar panels, from their spinning-reserve backup, from the thousands of miles of cables to link them to the grid, from grid-stabilization emissions and from the eventual decommissioning of these machines after their 15-year useful life, net CO2 emissions abatement works out to be approximately zero in comparison with conventional energy sources, but at a crippling cost.

There is no question that Chile, and America in fact, should withdraw from the Paris Agreement, cancel all payments to the UN for climate change programs, eliminate all climate regulations and abolish all green taxes that are ruining the country. In the meantime, we should learn from Chile’s mistakes and kill the climate scare before it kills us.

For an update on the situation in Chile and the cautionary tale his country’s disastrous experience earning the UN’s “Champion of the Earth” award has become, Douglas Pollack will be our guest on THE OTHER SIDE OF THE STORY, our radio program at AmericaOutLoud.com on Saturday and Sunday, April 2 and 3 at both 11 am and 8 pm Eastern Time.