Reposted from NOT A LOT OF PEOPLE KNOW THAT

Signs that China is already backtracking on its climate pledges: 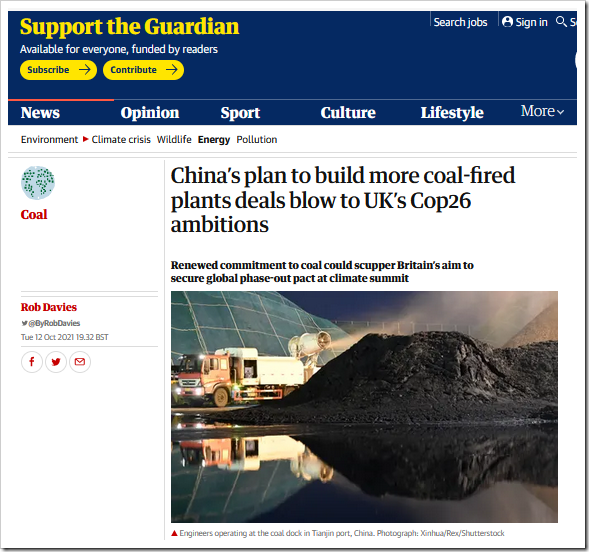 China plans to build more coal-fired power plants and has hinted that it will rethink its timetable to slash emissions, in a significant blow to the UK’s ambitions for securing a global agreement on phasing out coal at the Cop26 climate summit in Glasgow.

In a statement after a meeting of Beijing’s National Energy Commission, the Chinese premier, Li Keqiang, stressed the importance of regular energy supply, after swathes of the country were plunged into darkness by rolling blackouts that hit factories and homes.

While China has published plans to reach peak carbon emissions by 2030, the statement hinted that the energy crisis had led the Communist party to rethink the timing of this ambition, with a new “phased timetable and roadmap for peaking carbon emissions”.

“Energy security should be the premise on which a modern energy system is built and and the capacity for energy self-supply should be enhanced,” the statement said.

“Given the predominant place of coal in the country’s energy and resource endowment, it is important to optimise the layout for the coal production capacity, build advanced coal-fired power plants as appropriate in line with development needs, and continue to phase out outdated coal plants in an orderly fashion. Domestic oil and gas exploration will be intensified.”

Beijing’s renewed embrace of coal – apparently at odds with Xi’s state climate ambitions – are likely to cause alarm in the run-up to Cop26.

George Magnus, a research associate at Oxford University’s China Centre and the author of Red Flags: Why Xi’s China Is in Jeopardy, said Beijing had been forced to revise its plans in the face of the reality of economic problems and power outages.

There is nothing new about the expansion of coal power, which we have known apart for a long time.

But what is significant is the statement from Premier Li Keqiang, which suggests that energy security is now the key objective rather than emissions, and that the promise to peak emissions by 2030 may be rethought.

Reading between the lines, it appears there is a power struggle taking place between Li and President Xi, who is said to be unlikely to turn up in Glasgow. The Telegraph’s Ben Marlow believes this may be because Xi is afraid of a coup if he leaves the country. He is already in trouble on other fronts, such as his autocratic style of government.

As I have commented before, Xi’s promises of peak emissions and carbon neutrality by 2060 are worthless. When he is eventually ousted, as happens to all Chinese leaders, his policies will accompany him into the wilderness.

New leaders will disassociate themselves with his failed agenda, and all of the country’s problems will be blamed on Xi personally. Whatever pledges he may have made to world leaders will mean nothing to his successors.

We  are already seeing how damaging the energy crisis is to China’s economy, regardless of the cause. What is inevitable is that any serious push to phase out coal power will cause immense harm to economic growth and people’s standards of living.

This would in turn be an existential threat to the CCP itself. Li seems to have realised this, and may be positioning himself for a challenge.

Either way, the West can forget about any meaningful concessions from China at COP26.