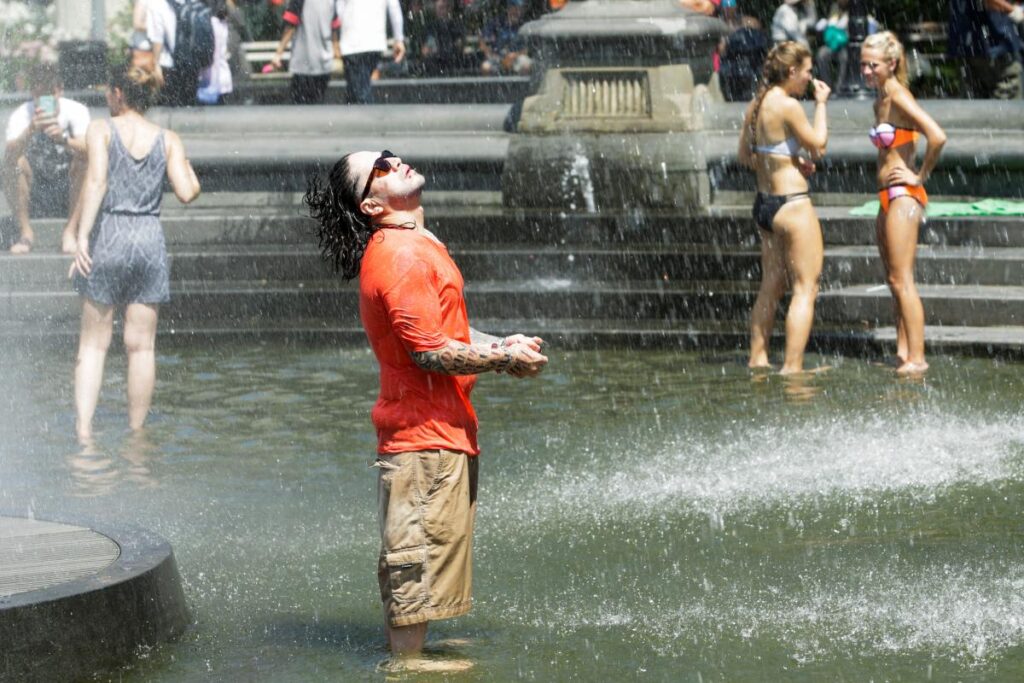 Climate change, relative to the pre-industrial baseline, is alleged to cause already over one third of all heat-related deaths globally. If this is true, the number of cold-related deaths due to climate change must have decreased much more. But that is never addressed by climate researchers.

Extreme heat can kill, even in the Netherlands. The mortality graph on the Dutch ‘corona dashboard’ clearly shows a sharp peak after the exceptional heat wave in early August 2020, with temperatures up to 36 degrees Celsius. The excess mortality is about eight hundred people. This peak is clearly visible due to the fact that the Netherlands was then in between the first and subsequent corona waves, with mortality in July and  September at almost exactly ‘normal’ levels for that time of year.

These heat-related deaths are not delivery boys or garbage collectors dropping dead in the streets; they are almost all very frail, elderly people, mainly in care homes. Because of the high temperature, the heart needs to work harder to enable the circulating blood drain the heat produced by the body. For the heart of the very old and the very frail, this can be the last straw.

Heat-related deaths can be prevented effectively
So, this extra mortality is almost 100 % preventable by fitting care homes and other care facilities with air-conditioning and simple behavioral adaptations, like staying indoors for a few days. In that sense, the Netherlands still has quite some catching up to do.

The blue line in de graph on the corona dashboard also shows, that ‘normal’ mortality (by all causes, averaged over several years) is clearly seasonal. The peak is in early February at 3450 deaths per week, and the minimum in late August at 2660 (total normal mortality is about 153.000 deaths per year). In the four coldest months, almost ten thousand more Dutch people die than in the four warmest months. In a winter with a severe flue epidemic, it can be fifteen thousand more.

It is an interesting question in principle, what will happen to mortality if the Netherlands heats up 1.5 degrees, with everything else staying the same. In the shorter, warmer winter fewer people will die, but extreme heat waves will take their toll more often. What would the net difference be?

Do heat-related deaths happen in Oslo?
This 1.5 degrees is no coincidence, because this is the temperature difference, in 2020, between two global climate scenarios in a publication by a large group of researchers (hence Gasparrini et al.) in Nature Climate Change in May.  One climate scenario (factual) follows the actual development since 1900, the other scenario pretends humanity has never emitted any CO2 or other greenhouse gases (counterfactual). The resulting virtual temperature difference, evident from around 1990, causes a difference in global mortality which is attributed to anthropogenic climate change.

The calculation by Gasparrini et al. is a complex, multi-stage statistics rocket.  First, daily mortality and temperature data in the four warmest months of the year were collected for over seven hundred cities and regions on all continents (except Antarctica). In each location, a quantative relation between temperature and mortality (by all cuses) was derived from these data. A temperature difference at each location was derived from the difference between the two climate scenario, which translate to a certain number of heat-related deaths in each location attributable to anthropogenic climate change.

So, no attempt has been made to identify causes of death plausibly related to heat. According to this model, heat-related deaths also occur in cities such as Oslo and Johannesburg, where – averaged over 24 hours – it has never been warmer than 23 and 25 degrees Celsius, respectively.
Also, in many tropical countries there is little difference in temperature between the four hottest months and the the rest of the year, while the distinction between the wet and dry season is much more important. Epidemics such as malaria and dengue, mainly get their chances in the wet season.  are on the rise. The model is blind to that as well. 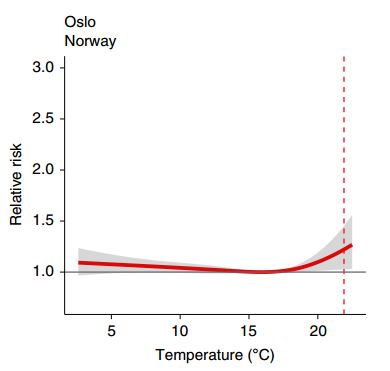 The relation between mortality and temperature during the four warmest months of the year in Oslo. The lowest mortality in these four months is 1 by definition. source:  Gasparrini et al.

This did not prevent the researchers from shouting the results of this statistical exercise from the rooftops: anthropogenic warming is already responsible for more than a third of all heat deaths.
The editors of Nature found the result important enough to dedicate a News & Views to it, a comment by another researcher, who said: Mortality associated with rising temperatures is one of the clearest and impactful fngerprints of a changing climate.’

This result fits seamlessly into the narrative which is eagerly embraced by the media, that ‘deadly heat waves’ will ravage the world in the coming decades.  If we accept  the result of Gasparrini et al. at face value, how much extra mortality does this involve?
In the counterfactual scenario,  from 1991 to 2018, heat contributed 0.98% to the global mortality in the four warmest months. In the factual scenario that is 1.56%. So man-made climate change caused 1.56-0.98 = 0.58% of the mortality. As a percentage of the total heat-related mortality, the anthropogenic share is therefore more than a third (0.58/1.56 = 0.37).

‘Fingerprint’ tripled in size
The supplementary information to the article also breaks this down by country, and lists 0.56% for the Netherlands, or 244 anthropogenic heat deaths. Confusingly, Gasparrini et al., without making this clear, do not report heat mortality as a percentage of the total annual mortality, but of the total mortality in the four hottest months of the year. That’s only one third of  the year, making the above percentages about three times higher than you would expect.

Case in point: the 244 anthropogenic heat deaths in the Netherlands are only 244/153,000 x 100% =
0.16% of the annual total mortality. Apparently, the Dutch ratio between mortality in the summer and mortality in the entire year is 16/56. If that ratio is about the same all over the world, global anthropogenic heat mortality is 16/56 x 0.58% = 0.17% of total annual mortality. Nowhere do Gasparrini et al. mention or calculate this more intuitively understandable percentage. 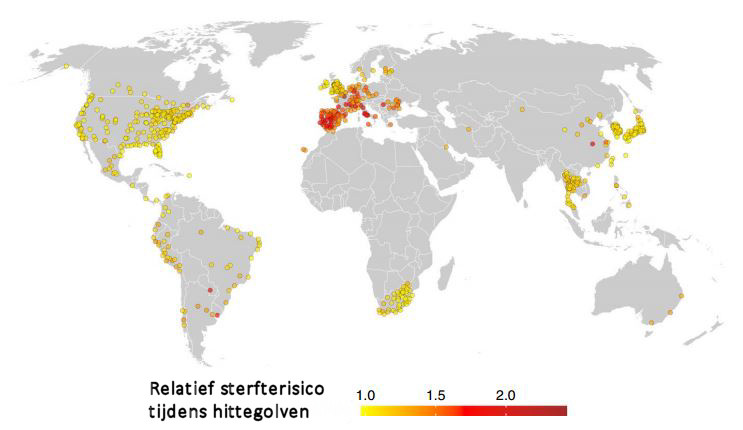 Relative risk of death durring extreme heat waves. A heat wave is defined here as days which are hotter than 99% of the rest of the four summer months. Remarkably, heat is only a substantial risk in South and Middle Europe. Yet other research shows, that heat-related deaths in Spain have decreased drastically in the last twenty years. Source illustration: Gasparrini et.al.

Climate change means fewer deaths in winter
The elephant in this room full of ‘fingerprints of a changing climate’ is: only the four hottest months of the year were taken into account. Why? The article is silent on that, while it is well known that the peak of annual mortality is in the winter, not in the summer. In winter, the relationship between temperature and mortality is the opposite of that in summer: the warmer, the less mortality. For example: the not even particularly harsh winter of 2014/2015 caused about forty thousand extra deaths in Great Britain.  It is incomprehensible why Gasparrini et al., after all this effort to collect the daily temperature and mortality data for more than seven hundred locations, then decided to throw away two-thirds of these data. Without much extra effort, they could have let their model calculate the anthropogenic reduction in winter mortality as well.

Seventeen times more cold- than heat-related deaths
Ironically, in 2015 Gasparrini and some of the same co-authors published in The Lancet a global temperature-mortality study based on more than four hundred locations and using approximately the same statistical method, in which they do look at the entire year.
In that study, heat causes 0.42% of total mortality, and cold 7.29%, so about seventeen times as much. In the Lancet article, no factual and counterfactual
scenarios are compared, so they make no statements about the anthropogenic share. But it is extremely unlikely that winter mortality would be more than seventeen times more insensitive to temperature increase as the summer mortality. So, the net effect of anthropogenic warming will be: less mortality.
In their conclusion in 2015, Gasparrini et al. still referred to ‘adverse temperatures’, so both too hot and too cold: “This evidence has important implications for the planning of public-health interventions to minimise the health consequences of adverse temperatures, and for predictions of future effect in climate-change scenarios.”

But their article in Nature Climate Change in 2021 only mentions the anthropogenic contribution to extra mortality in the summer, on the basis of which they state: ‘our findings provide even more evidence for the potential benefits of strict policies to reduce future warming.’

Adaptation in hotspot Spain
As the world map above shows, according to the model of Gasparrini et al., Spain is the global hotspot for heat-related mortality risk. Is Spain therefore entering an era of deadly summers,  unless we stop further global warming? 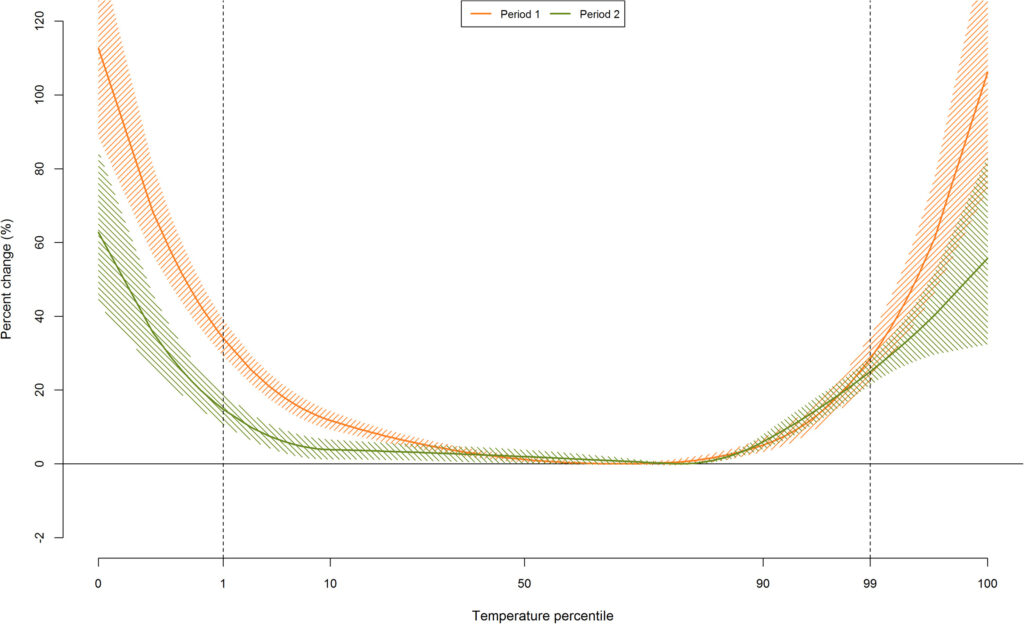 Judge for yourself: in 2019, a study was published in Environmental Research about heat- and cold-related deaths in Spain. It compared that part of mortality in 1993-2002 (period 1) with 2004-2013 (period 2). Both during extreme cold and extreme heat, mortality decreased significantly, although it was warmer in period 2 than in period 1. It was no coincidence, that Spain introduced a national heat plan in 2004 to better protect vulnerable people during heat waves, which was apparently quite effective.

There was no analogous plan for the winter, but it seems likely that the warmer weather in period 2 has resulted in a decrease in winter mortality. In addition, the general increase in prosperity in those twenty years, so that low income people could afford better housing and heating, will also have contributed its part.

Of course, the national heat plan didn’t require summer lockdowns or a total transformation of social life and the economy; it involved limited, pragmatic measures such as those mentioned at the beginning of this article. It is often argued about climate change that prevention (mitigation) is so much safer, more effective and cheaper than adaptation, that mitigation is the only realistic option. Until now, as regards the prevention of heat deaths, reality turned out to be quite the opposite.