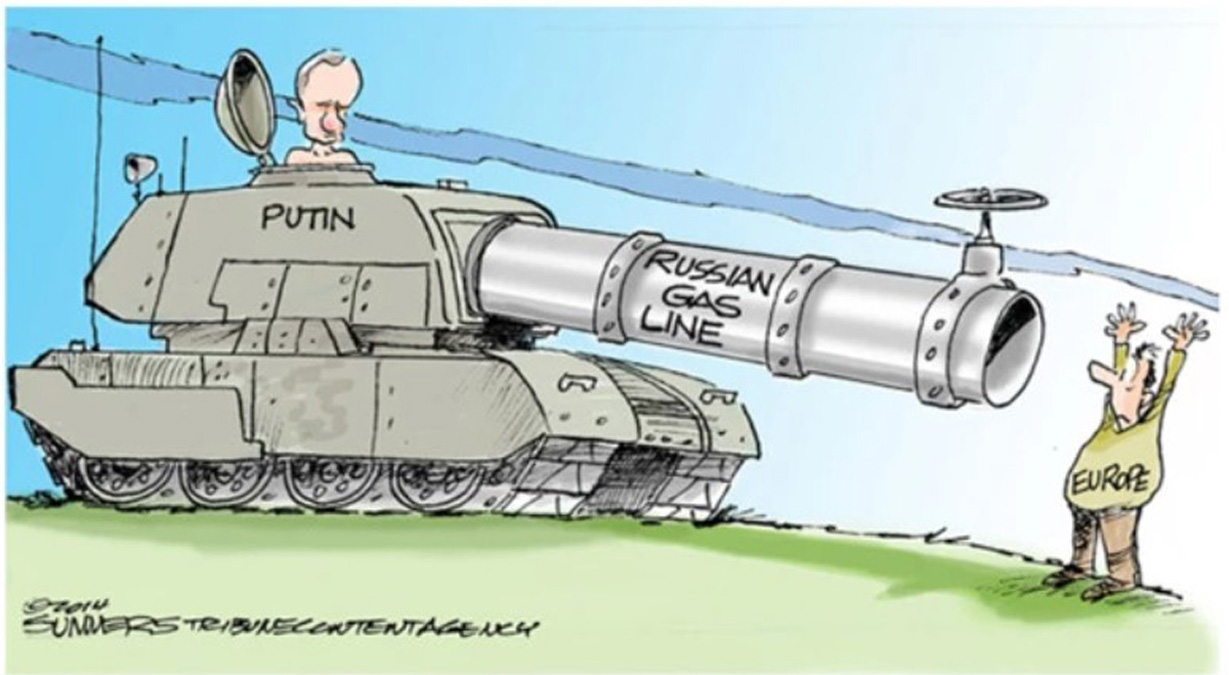 So, what happened to European efforts to develop a shale gas and oil industry like we have in the United States? Recent shortages, Putin’s invasion of Ukraine, and high energy prices have proven that we are not remotely prepared to make it without fossil fuels.

As Holman Jenkins explains in yesterday’s Wall Street Journal (Jenkins, 2022), the so-called “Engine No. 1” hedge fund fought a noisy battle with ExxonMobil for board seats that were meant to help lead the company away from fossil fuels. It amounted nothing, except it made Chris James, the billionaire founder of Engine No. 1, even more rich. The news media predictably picked up his cause and drove ExxonMobil’s stock price down into the $30s. James bought his shares of ExxonMobil very cheap and now they have more than doubled in value, today’s price is $78, after less than two years. Was he trying to eliminate fossil fuels, or just trying to get richer?

It is obvious that Europe should develop its potentially rich shale reserves, but they haven’t, why? I was a shale petrophysicist in a previous life, and I can attest to the expense and complexity of discovering, evaluating, and developing shale gas and oil. It is difficult, but not impossible, and it is certainly more rewarding and profitable than wind and solar despite the distorted numbers you might have seen in the news media. The news media declares that non-dispatchable wind and solar have a lower LCOE (levelized cost of electricity generation) or LACE (levelized avoided cost of electricity generation) than all fossil fuels, but they don’t report the details that reveal these calculations are elaborate lies by the EIA, as the EIA admits in the fine print:

“LCOE values for wind and solar technologies are not directly comparable with the LCOE values for other technologies that may have a similar average annual capacity factor. As a result, wind and solar technologies are shown separately as non-dispatchable technologies. Hydroelectric resources, including facilities where storage reservoirs allow for more flexible day-to-day operation, and hybrid solar PV generally have significant seasonal and daily variation, respectively, in availability. EIA shows them as non-dispatchable to discourage comparison with technologies that have more consistent seasonal and diurnal availability [fossil fuels and nuclear].”

In other words, solar and wind, and to a lesser extent hydroelectric, may not be there when you need them, their availability depends upon the weather, the season, and time of day. LCOE does not include the cost of backing up these sources with fossil fuels or nuclear, it just assumes backup will be available when needed. Second, LCOE and LACE include the value of large subsidies for wind and solar in their calculations, further distorting their numbers, since there are no subsidies in the United States for fossil fuels. For a more accurate assessment of the relative costs of various sources of electricity, see the discussion here, it clearly shows that wind and solar are not competitive with fossil fuels, which is what real-life experiments in California and Germany have also shown us.

Shale gas and oil in Poland

Our main source is a peer reviewed paper by Professor Andreea Maierean in the journal Discover Energy (Maierean, 2021). She concludes that due to political, social, and technical factors the multinational energy corporations working in Poland had to abandon their efforts to develop Polish shale deposits.

She points out that U.S. landowners profit from production from below their property, but in Poland and the rest of Europe this is not the case. Fossil fuels and other profitable minerals below the surface in Poland are owned by the government, so the local property owner has no incentive to allow exploration and production on their land, and a huge disincentive to do so. In the U.S. sometimes there is split ownership of property where one person owns the mineral rights under the land and another owns the surface rights. Under U.S. laws, the surface owner cannot prevent the minerals owner from accessing their minerals, however, the surface owner is due compensation for access to the land and for damages. There is no such law or principle in Europe, while surface rental is commonly paid there, the surface owner has more ability to keep the mineral owner, usually the government, from accessing their minerals.

Another advantage the United States has is decentralization. Local and state governments control the energy regulations in most of the United States. In Europe usually the minerals are owned and controlled by the national governments, which tend to be more restrictive.

Besides the legal advantages in the United States, the U.S. enjoys an advanced and widespread drilling, evaluation, and hydraulic fracturing industry. European countries have some access to these technologies and services, but not at the scale or cost necessary for shale exploitation. European environmental groups, possibly funded in part by Russia according to NATO, managed to apply enough pressure to halt hydraulic fracturing in most European countries.

There are two main reasons that the multinational oil and gas companies abandoned their efforts to develop shale gas there. The primary reason was access and infrastructure. A 2,000 meter horizontal well costs less than four million dollars in the U.S., but over eleven million dollars in Poland. Poland also has very few pipelines and they are not in the best drilling locations, this combined with a Polish prohibition on flaring gas while testing wells made a proper exploration effort virtually impossible.

The second reason was a combination of public protests against drilling, and regulations that prohibited proper testing of wells. In 2012 and 2013, Polish farmers protested and fought off Chevron drilling crews and successfully stopped their exploration efforts near Żurawlów, Poland (Szolucha, 2019). Eventually, Chevron had to abandon their exploration efforts.

Shale exploration is very different from exploration for conventional oil and gas. In shale you already know where the resource is, the problem is finding the location within the shale where you can economically develop the resource. This means drilling, completing, and producing a number of wells until you find locations and techniques where drilling, fracturing and production techniques work economically. In conventional fields, you explore for the reservoir first, then work on producing it, in shales you must do both at the same time. Further in shale the testing period is longer, typically six months, while a test of a conventional discovery is completed in a day or two. Often fracturing the reservoir is not required for a conventional well, and the production can be stored in tanks. Not so with shale.

Poland simply didn’t have the infrastructure, or the regulations required to figure out their shale potential. Some think the shales are not very productive anyway, and this is true for the locations that were drilled, the organic content of the shales was low, and the shales were too ductile to fracture properly, at those locations. However, other locations, where drilling was not allowed, may have worked.

Poland probably has between 350 to 5,300 billion cubic meters of potentially recoverable natural gas, the large range of estimates is due to the lack of good geological data, which in turn is due to the lack of drilling and testing. Poland’s consumption of natural gas was about 21 billion cubic meters in 2020 to put these numbers into perspective (Johnson & Boersma, 2013).

One Polish geologist warned the Polish Senat (the upper house of the Polish parliament):

“let’s not publicize this issue! It’s not the European Union that is going to impede our shale gas project, but we will do it [to] ourselves. It is against Polish national interest to talk about taxation of resources, to threaten with them… Law can be created in secret and so on, but I warn you not to talk about it out loud because it will end badly”

He prepared a slide which depicted Gazprom (as a huge Russian bear) playing chess with the European Union. The cartoon summarized the way in which many Polish geologists thought about the main threats to the shale gas project (Szolucha, 2019). I was unable to find his cartoon or his name, but Figure 1 makes a similar point, it is from The Korea Times. 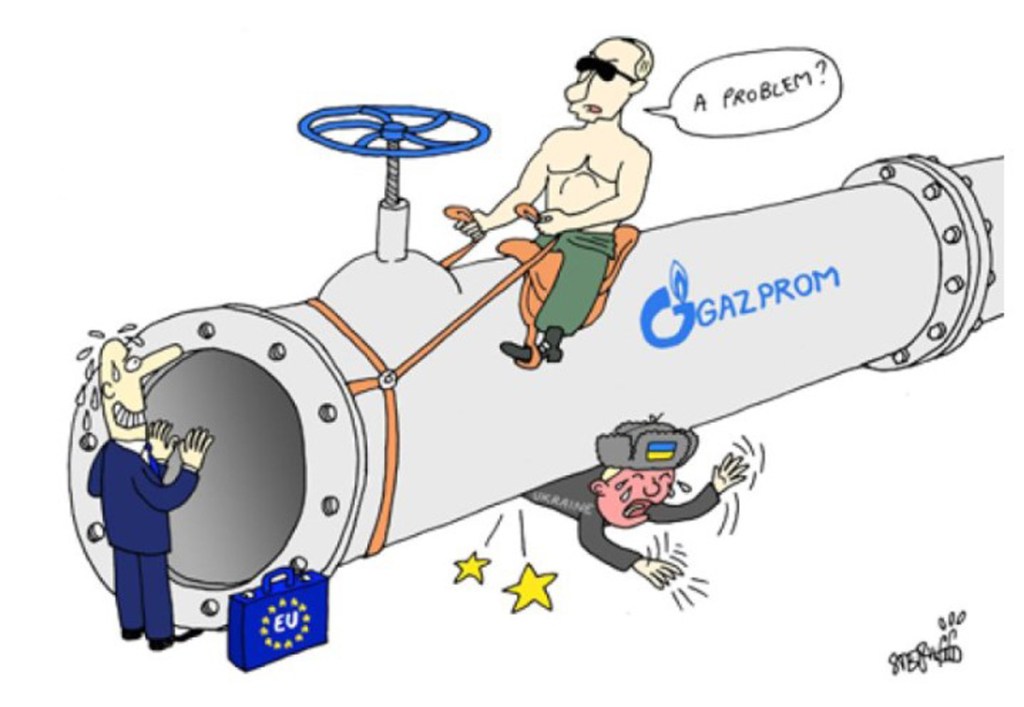 While the footprint (land area required) of shale oil and gas development is much smaller than the footprint of solar and wind installations, it is larger than that required for conventional oil and gas fields. Further shale requires many more wells and almost continuous drilling, until Poland and the rest of Europe modify their regulations to accommodate shale development, it will not happen. The problem with shale gas and oil production in Europe is not engineering, geology, or finance; it is all government regulations and public will. Probably the only way to achieve it, is to turn over the government-held subsurface mineral rights to the current surface rights owners.