The Climate Intelligence Foundation (CLINTEL) has cataloged significant errors in the UN IPCC AR6 Summary for Policy Makers (SPM) and distributed this error listing and analysis to the IPCC Chair and other world leaders to inform them of these errors.

The identified errors result in the SPM failing to meet standards of objective scientific integrity and therefore misleads world leaders regarding appropriate climate policy by erroneously pointing to a “climate crisis” that does not exist in reality. The seriously flawed SPM is “inappropriately being used to justify drastic social, economic and human changes through severe mitigation, while prudent adaptation” would be much more appropriate. 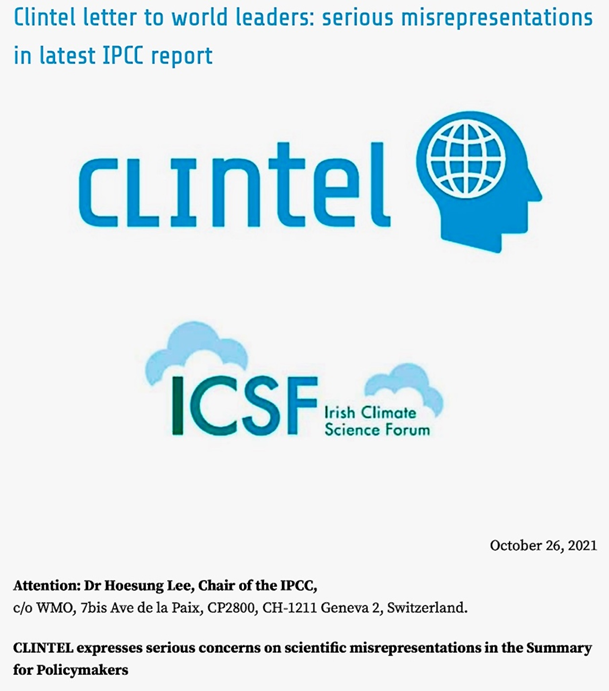 The significant errors are grouped into six key areas noted in the CLINTEL report as follows: 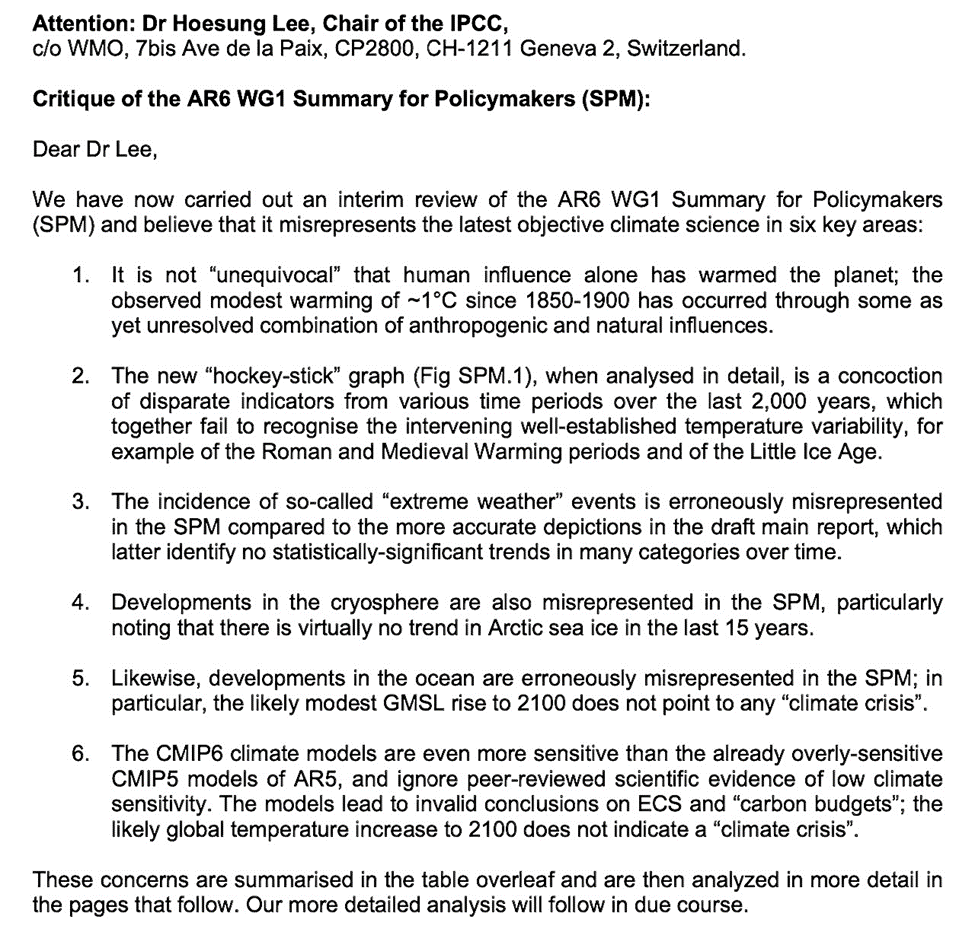 The SPM claim that human influence alone has warmed the planet is “unequivocal” is false with this claim ignoring natural climate influences including impacts of solar variability, natural events such as ENSO, El Niño, La Niña, AMO, PDO, etc. as well as impacts from geomagnetic storms, earthquakes, tsunamis and volcanic eruptions in addition to other areas of evidence addressed in the CLINTEL report that have been systematically ignored by the IPCC as shown in the summary below.

Most significantly flawed statistical schemes (attribution to “unequivocal” based on “major advances in science of attribution” claim) have been relied upon by the IPCC to support the “unequivocal” assertion with these schemes questioned by world renowned statistics experts Dr. Ross McKitrick and Steven McIntyre. These challenges require further evaluation by the IPCC SPM climate alarmist advocates.

This highly questionable “unequivocal” assertion contaminates all SPM claims across the six key areas of review as reflected in the use again and again of the flawed terms “human caused”, ”human-induced” and “human influenced”.

A portion of the CLINTEL summary rejecting the SPM “unequivocal” claim is provided below. 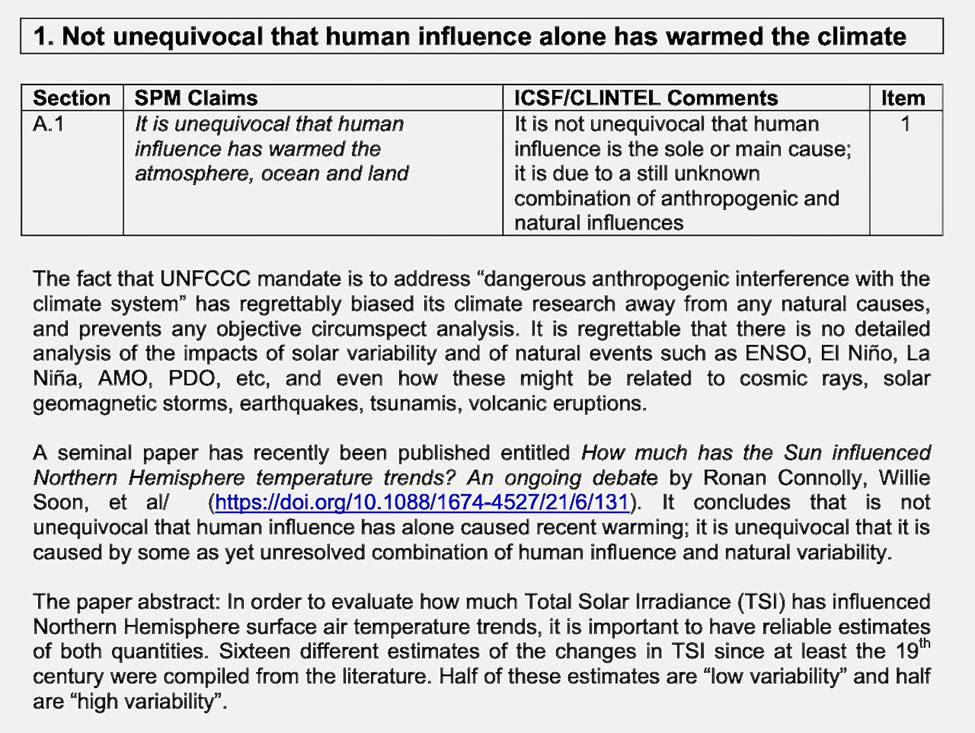 The CLINTEL report provides further examination of the issues noted above related to “human influence” and then addresses the statistical errors used in the “unequivocal” attribution claim as follows: 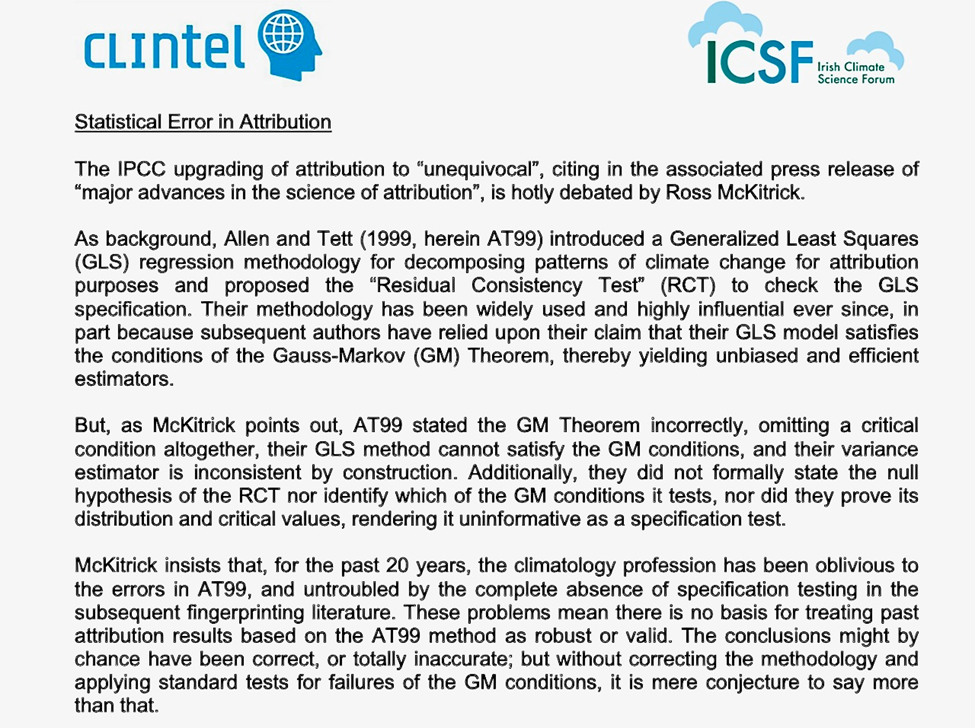 “Thus, the opening attribution statement in the SPM “It is unequivocal that human influence has warmed the atmosphere, ocean and land”is not scientifically robust. Additionally, the omission of any serious attempt to investigate any other explanations of climate change reflects a lack of IPCC open thinking and objectivity.”

The AR6 SPM utilizes flawed statistics to reinvent the phony “hockey stick” all over again to hide natural temperature climate variability over the last 2,000 years as identified in the CLINTEL report which notes the complete exclusion of the extensive and well established Medieval Warming Period peer reviewed proven data and studies in addition to ignoring the Minoan and Roman Warming Periods data and studies as well.

An example of one of the numerous peer reviewed temperature reconstructions that document these well-established warming periods in shown below. 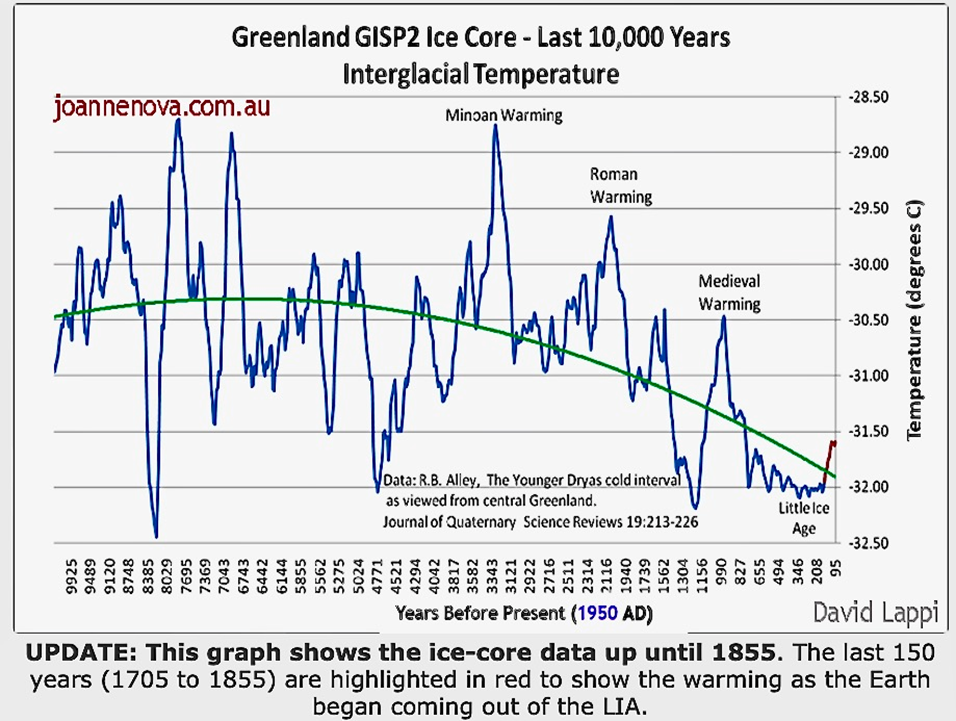 Looking at what the IPCC has done with the AR6 SPM “hockey stick” brings back memories of the IPCC “Hide the decline” trick debacle back in the climate science Watergate era that exposed climate alarmist “scientist” data manipulation shenanigans (recognizing that the nature of the “tricks” used in the hide the decline debacle is different than the statistical “tricks” used in the AR6 SPM report) as shown below.

The CLINTEL report addresses the SPM misrepresentation of climate temperature reconstruction data over the period of the last 2,000 years as shown in their summary below. 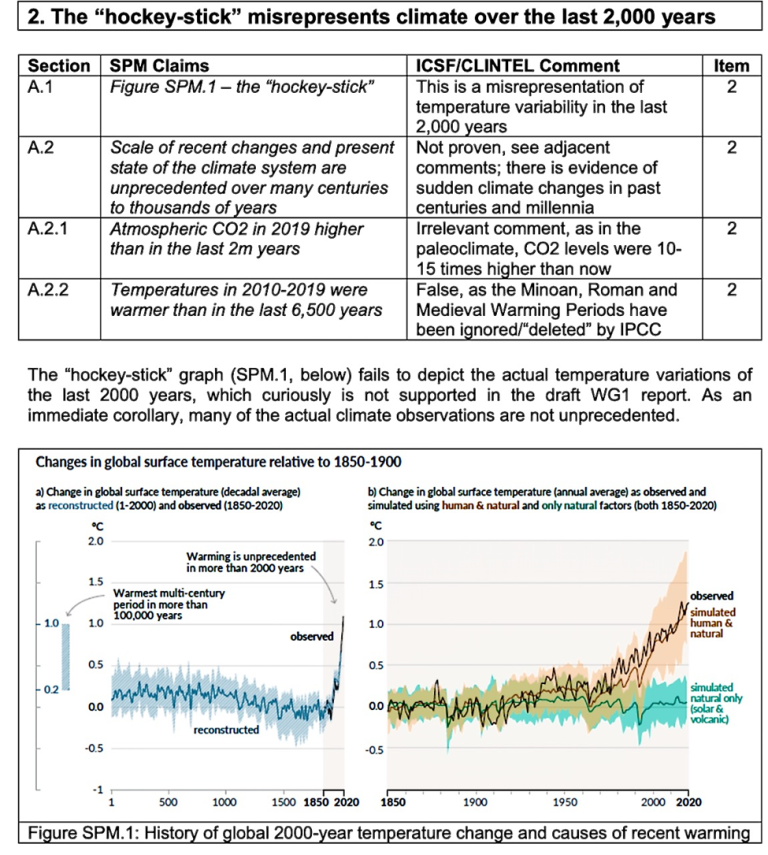 “It is concluded that the “hockey-stick” presented in the SPM has no rigorous scientific basis and misrepresents climate variability over the last two millennia. As a corollary, it cannot be asserted that recent climate variations are “unprecedented”.

The UN IPCC AR6 SPM “disappearing” the Medieval Warming Period is such an egregiously flawed climate alarmist propaganda scheme that it deserves a much higher level of scientific scrutiny and public attention.

The Medieval Warming Period is scientifically proven beyond doubt as presented (top photo) in numerous paleoclimate surface temperature reconstructions including by Dr. Judith Curry as shown in the comparison below which clearly displays the huge manipulated distortion in temperature reconstruction data present in the IPCC SPM over the last 2,000 years (bottom photo). 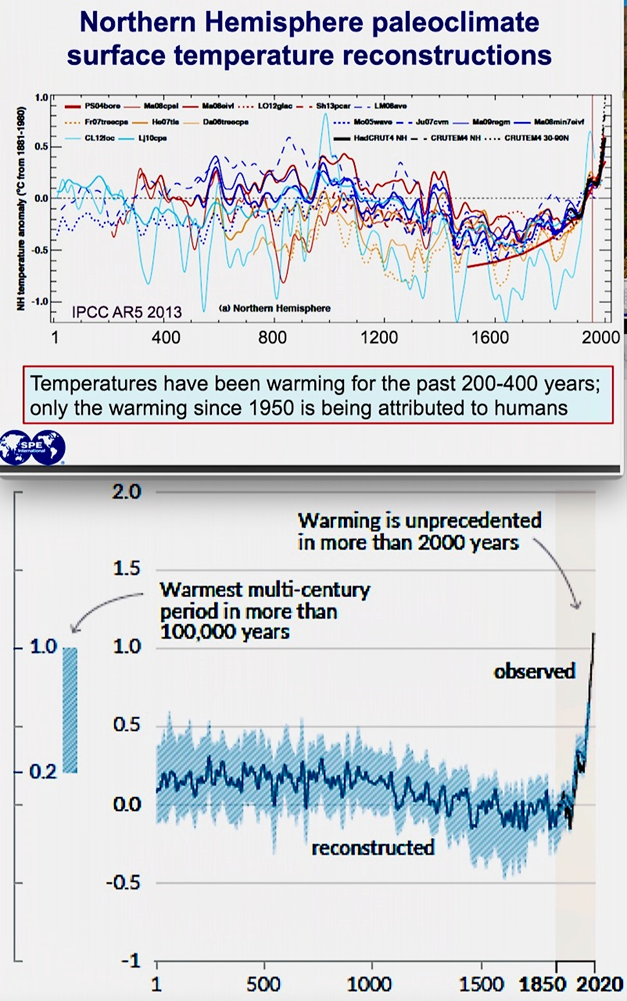 Additionally in an article at JoNova a summary of a just a few of the many global-wide paleoclimate surface temperature reconstructions are provided which clearly establish the idiocy of trying to deny that the Medieval Warming Period existed as done in the IPCC AR6 SPM.

That the IPCC Medieval Warming Period denial is based on absurdly contrived and flawed statistical “tricks” by politically driven climate alarmist authors who arrogantly believe their “tricks” are superior to and trump decades of global data collected and analyzed by dozens of peer-reviewed and published studies is simply astounding as clearly demonstrated by the Medieval Period data and studies from the JoNova article shown below. This article was first written in 2019 but is entirely relevant now considering the AR6 SPM warming period deceptions. 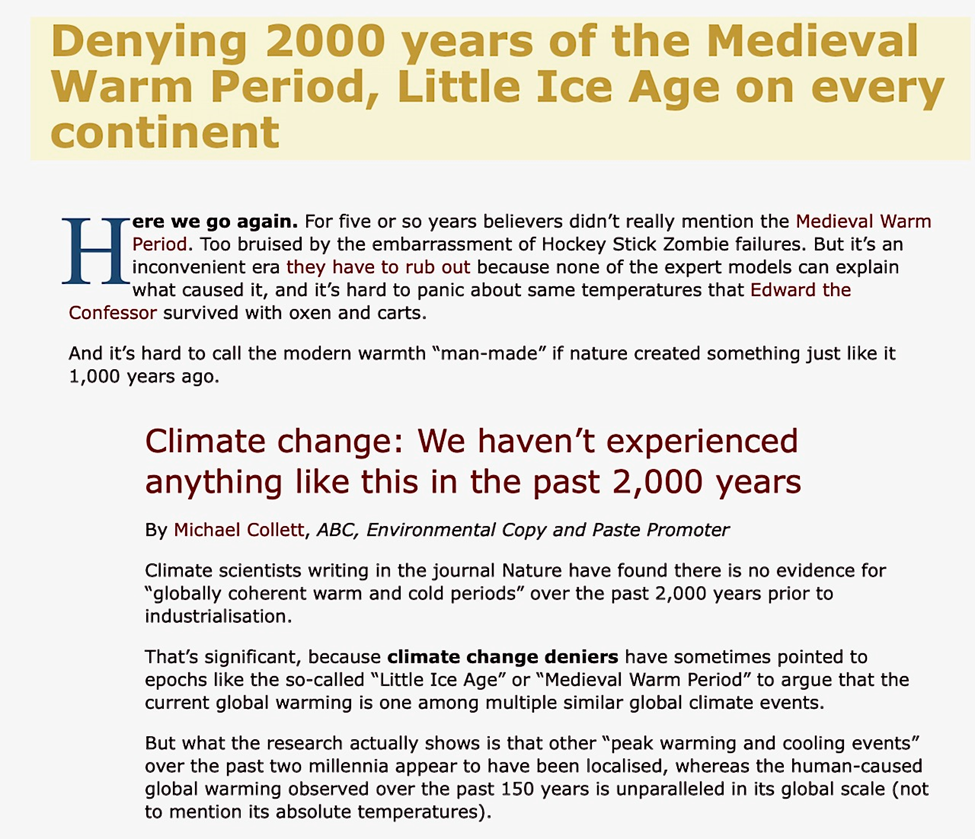 The JoNova article then provides a summary of just a few of the massive number of peered reviewed scientific data and studies that unequivocally supports the extraordinary climate variability of the last two millennia including the Medieval Warming Period which the UN IPCC tries to “disappear” by use of flawed statistical “tricks” addressed by Dr. McKitrick and Steve McIntyre in the CLINTEL report. 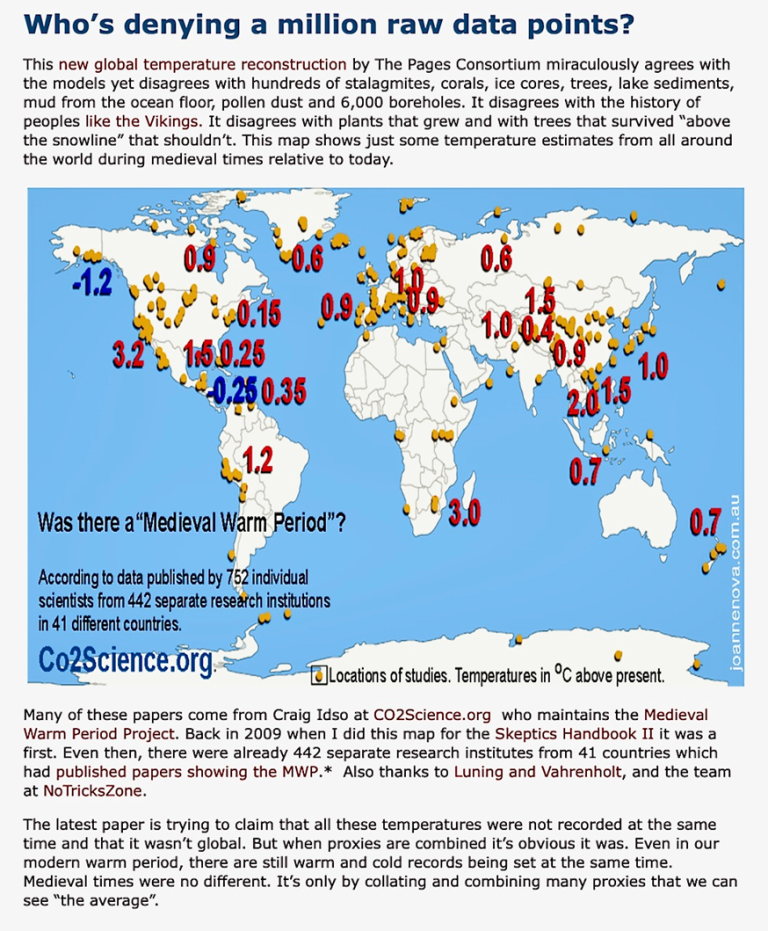 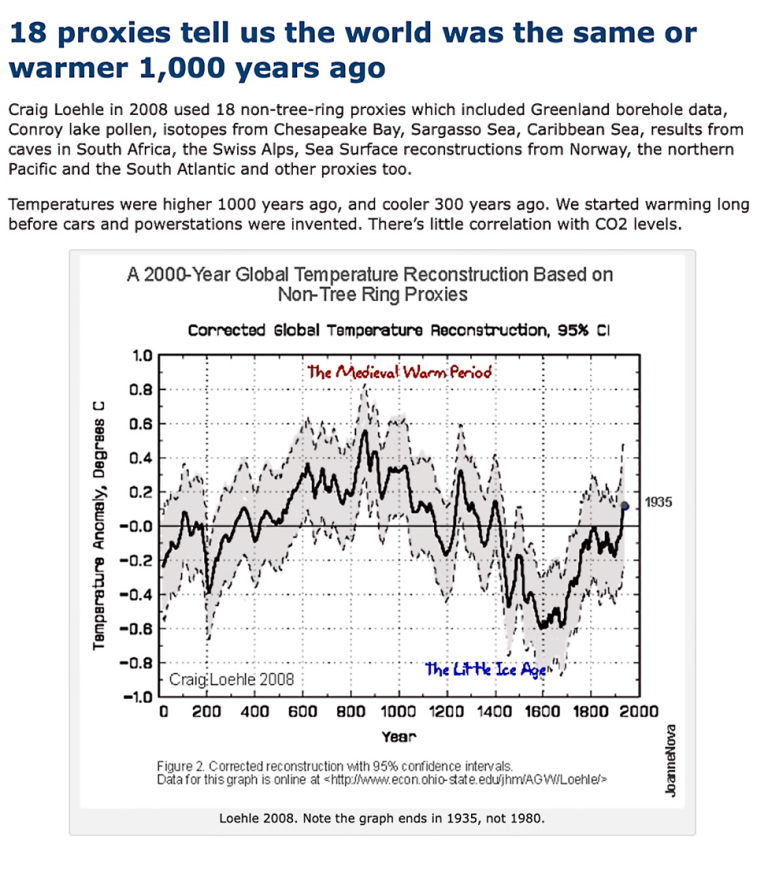 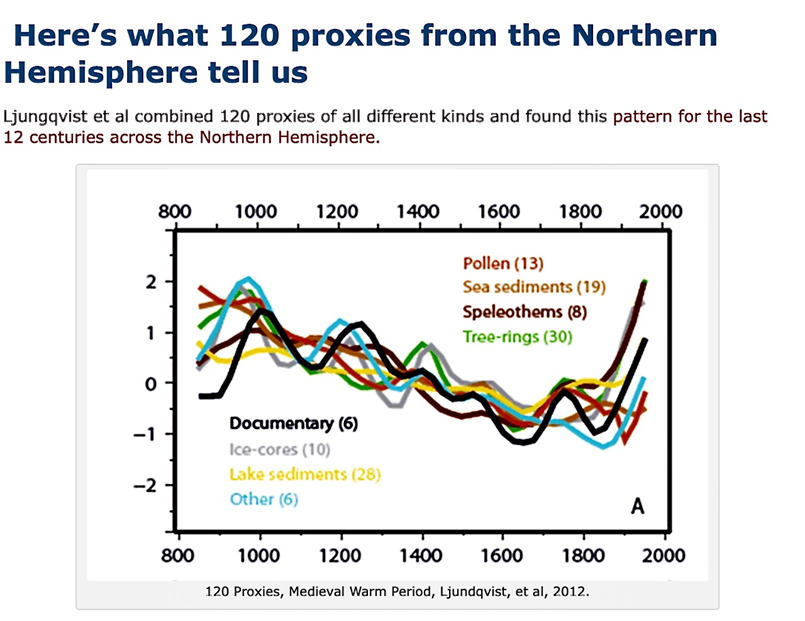 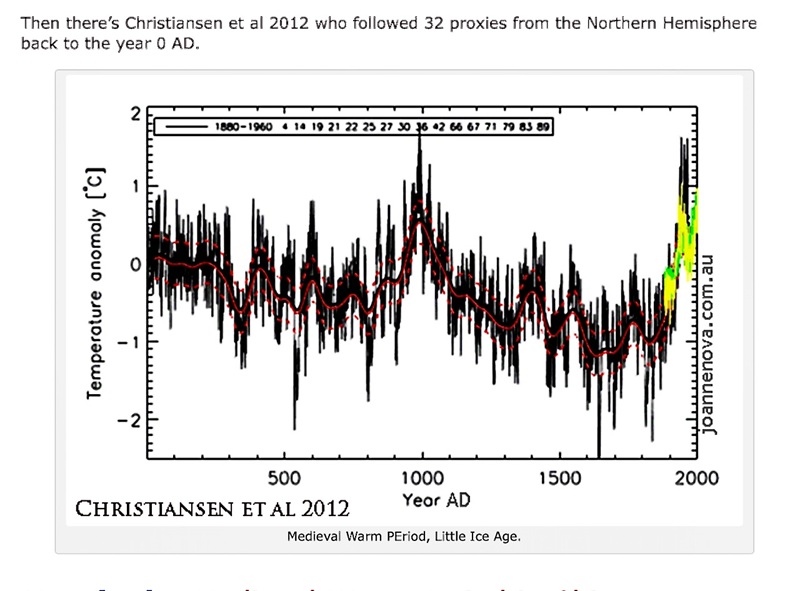 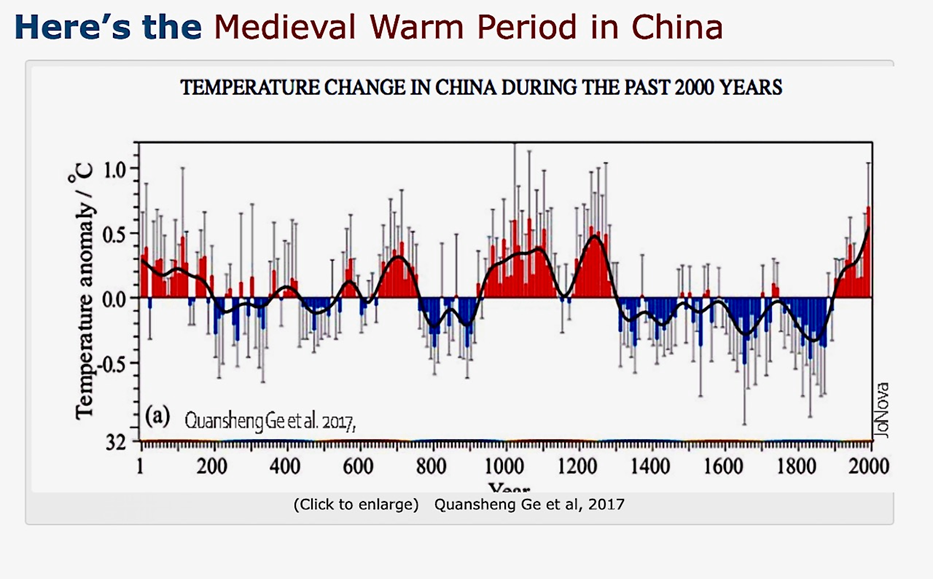 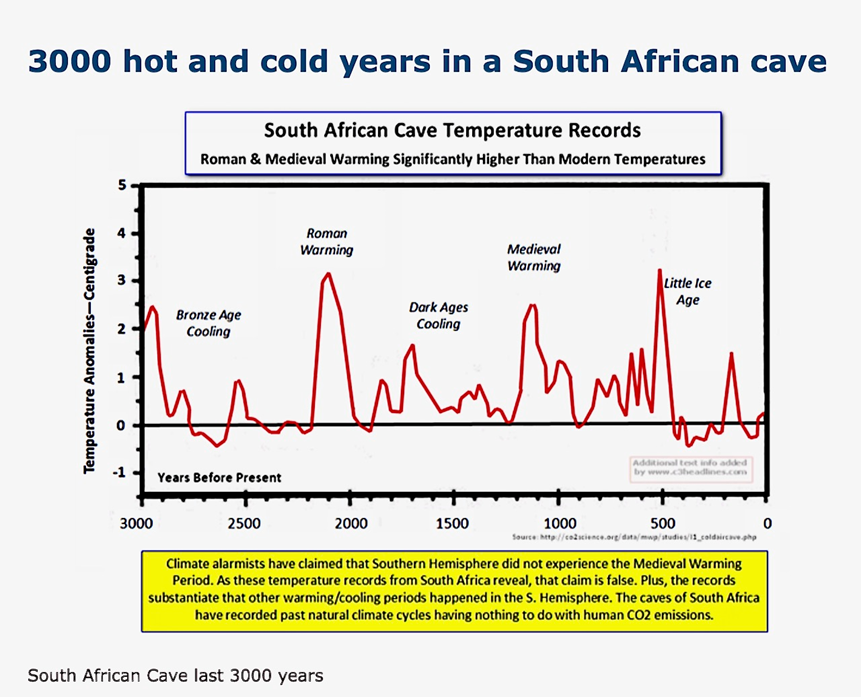 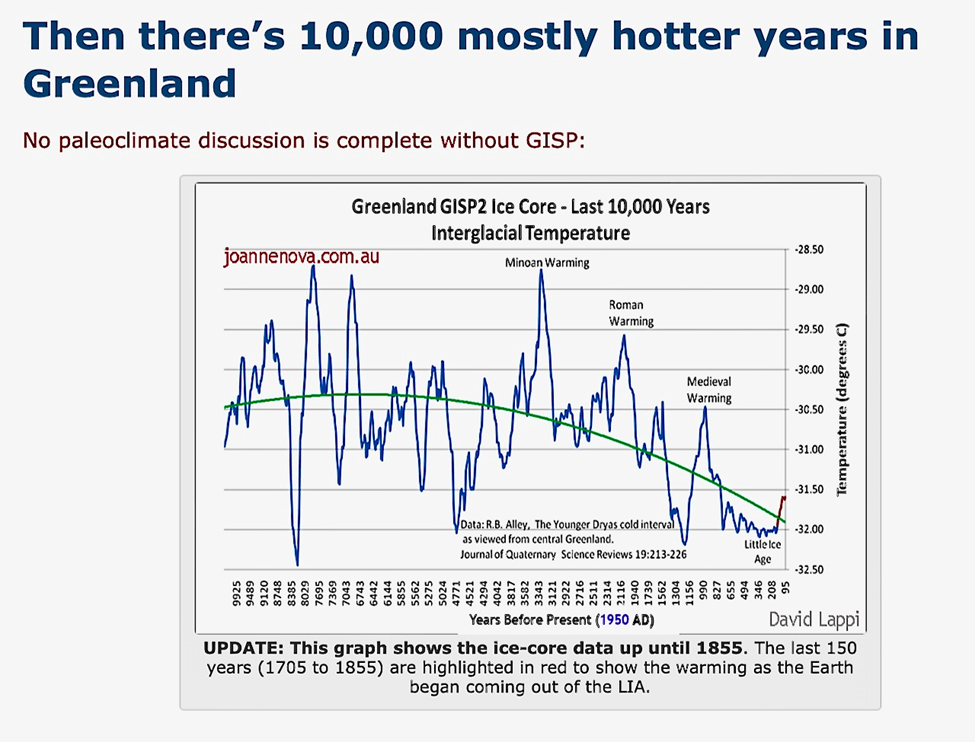 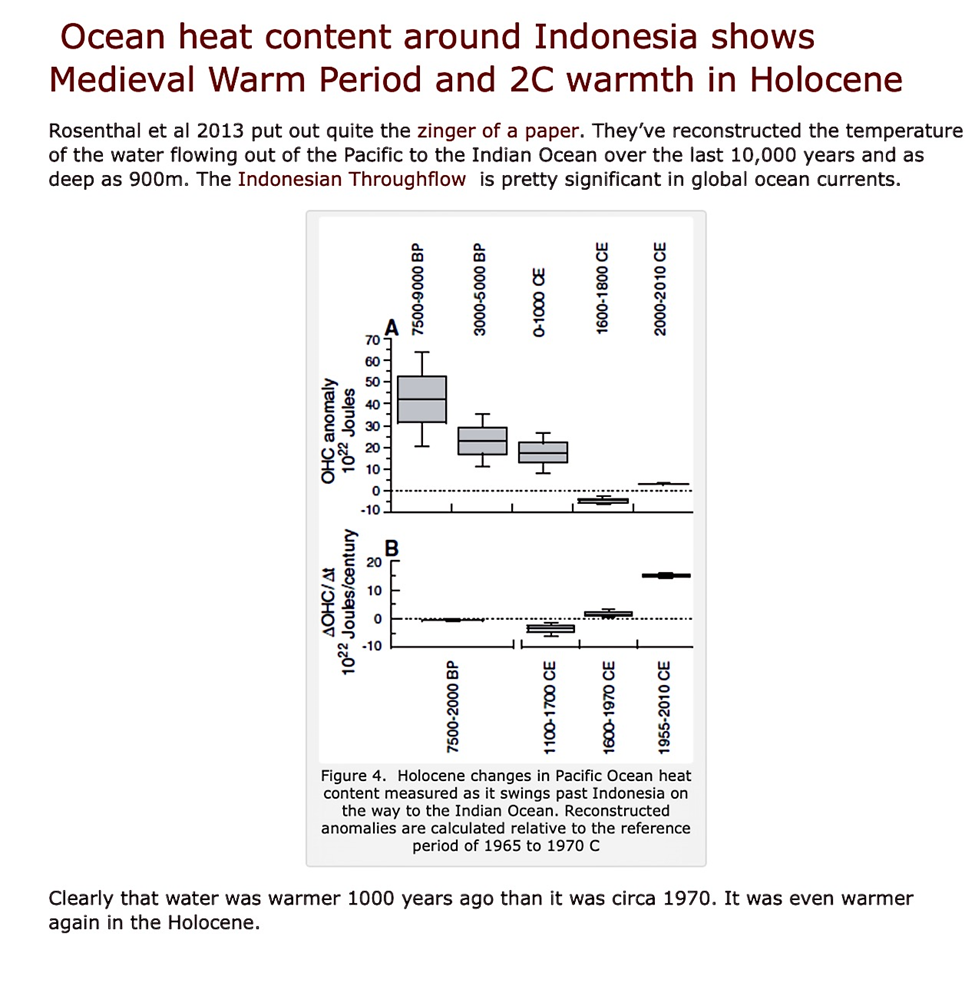 The fact that the UN IPCC would undertake such a colossally underhanded and erroneously flawed scheme as denying the unequivocal scientifically established credibility of the Medieval Warming Period that drove climate variability over the last two millennia reveals their desperate attempt to justify contrived and ludicrous phony “climate crisis” propaganda claims with this action clearly supporting that the SPM fails to meet standards of “objective scientific integrity.”

Additionally, the huge global-wide preponderance of peer reviewed scientific temperature reconstruction studies unequivocally supporting the existence of the Medieval Warming Period (as well as the Minoan and Roman Warming Periods) clearly constitutes proof that the statistical schemes and “tricks” utilized by the IPCC to “disappear” this warming period must be judged as being flawed and false.

This blatant act of “disappearing” the Medieval Warming Period reveals the politically motivated lack of climate science competence and integrity of the entire UN IPCC AR6 report and process and clearly displays that the IPCC promotes the politicalization of climate alarmist propaganda as its goal even if it means falsely rejecting, distorting and manipulating well established and proven peer reviewed scientific data.

The AR6 SPM was deliberately manipulated to meet alarmist political goals that would support the COP26 efforts to falsely mandate global nations to abandon fossil fuels and embrace excessive and costly use of unreliable, nondispatchable and backup power reliant renewable energy.

Fortunately, this scheme completely failed and the developing nations (led by China and India) controlled the outcome of COP26 by refusing to meet these economically destructive, scientifically flawed and purely climate alarmist contrived demands.

The CLINTEL report next addresses the SPM misrepresentations (again note the use of the terms “human-induced” and ”human influence”) regarding extreme weather as summarized below with the CLINTEL criticisms contained in the summary further expanded upon in more detail in their report. 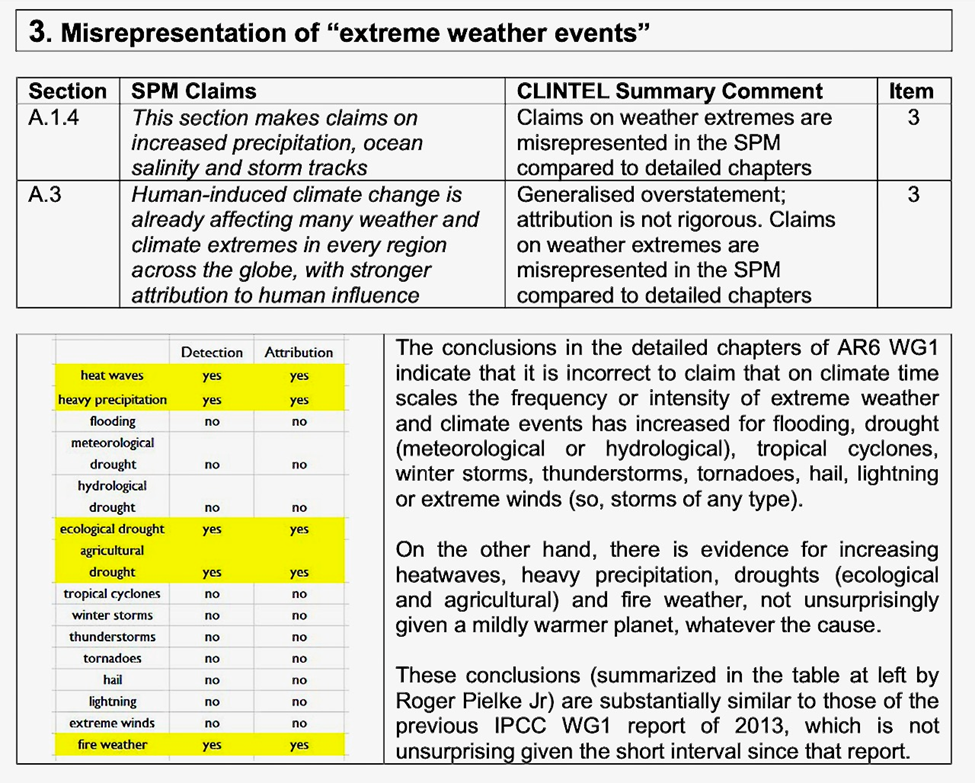 The CLINTEL report notes that the draft AR6 WG1 is inconsistent with the SPM claims regarding flooding noting that “there is low confidence in the human influence on the changes in high river flows on a global scale”, that ”heavier rainfall does not always lead to greater flooding” and “the number of significant trends in major-flood occurrences across North America and Europe was approximately the number expected due to chance alone” as well as  “Changes over time in the occurrence of major floods were dominated by multidecadal variability rather than by long-term trends.”

The report notes that “Perhaps the best overview of weather events since the last Ice Age is given in HH Lamb’s classic “Climate, History and the Modern World”, first published in 1982, reprinted many times since then. It also documented extreme weather events in the global cooling period of the 1960s and 1970s. This book alone leaves little doubt that modern-day so-called “extreme weather” events are not at all unprecedented.”

“As a conclusion, the SPM misrepresents the detailed findings on extreme events.”

The CLINTEL report next addresses the SPM misrepresentations (again note the use of the term “human influence”) of developments in Cryosphere as summarized below. 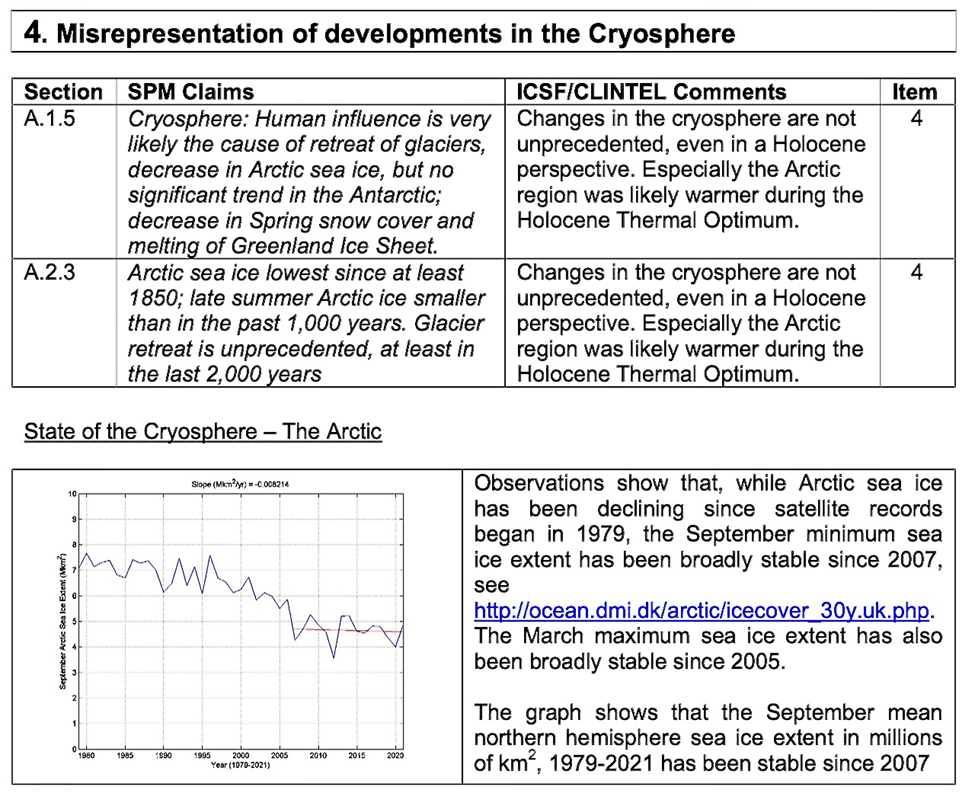 Dr. Curry in her presentation provided data addressing the long-term behavior of Arctic higher temperatures over the last 2,000 years as shown below with even higher Arctic temperatures occurring in the Holocene Thermal Optimum period 4,000 to 8,000 years ago. 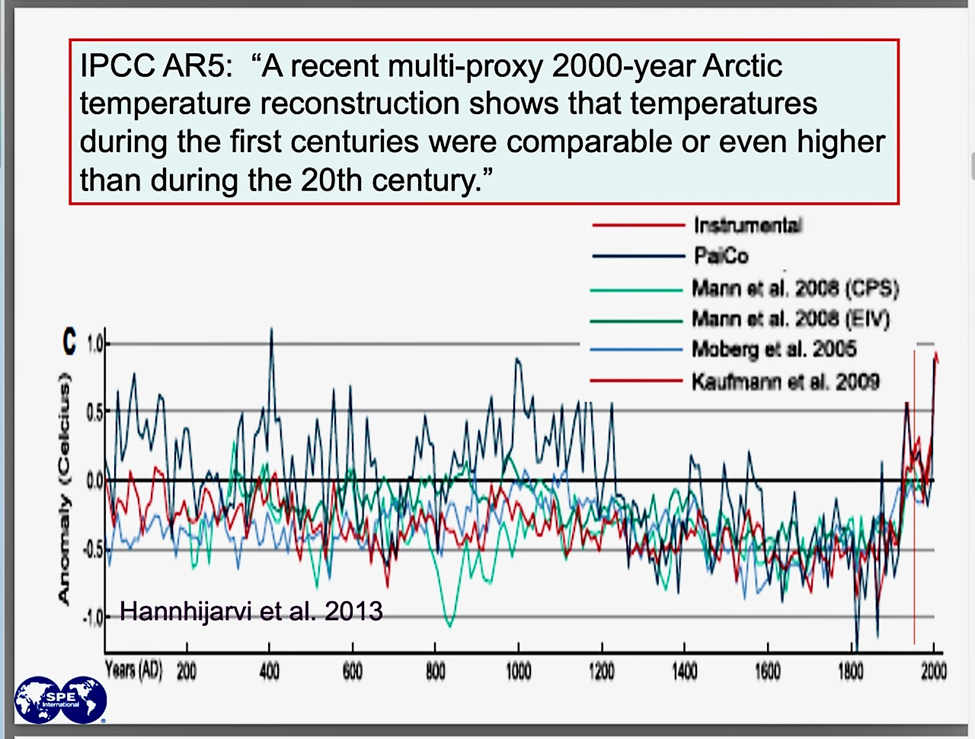 The Antarctica, Greenland and Glaciers are summarized in the CLINTEL report sections below. 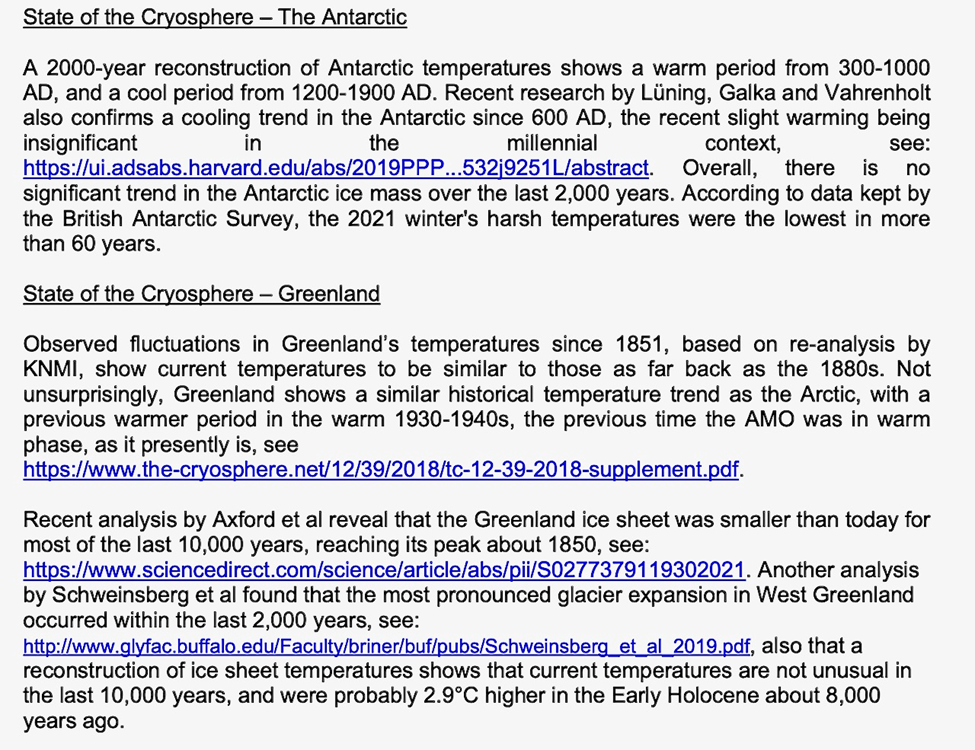 “In conclusion, the claimed changes in the cryosphere are not borne out by observations.”

The CLINTEL report next addresses SPM misrepresentations (again note the use of the terms “human influence” and “human Influences”) of developments in the Oceans. 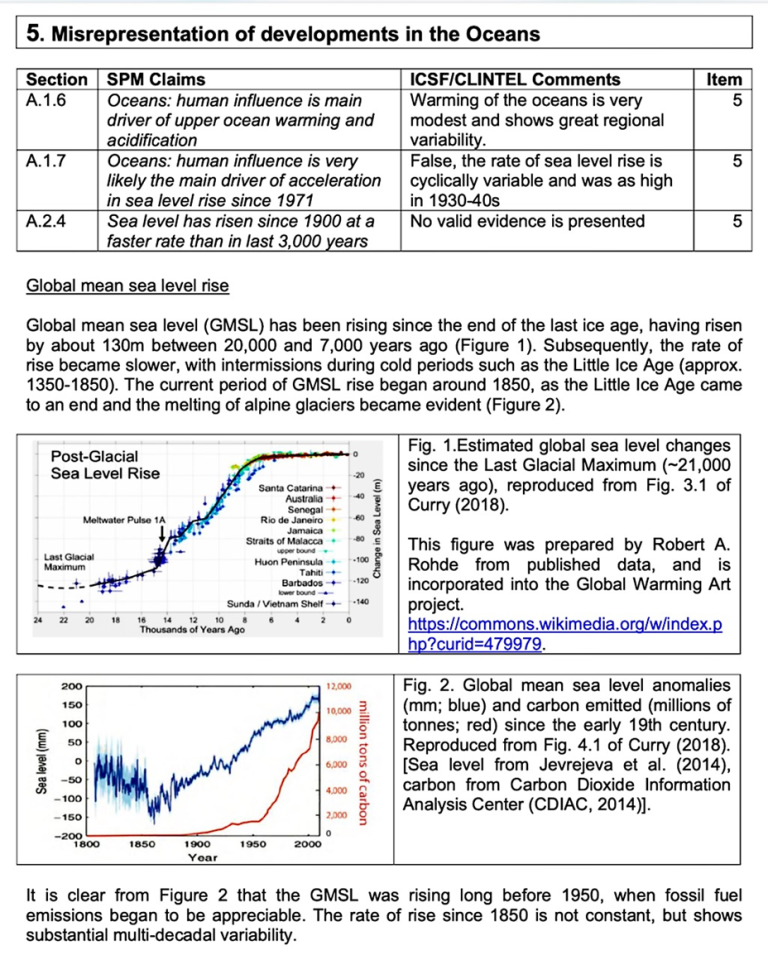 Dr. Curry in her presentation specifically addresses the flawed claim that “human influence” is the main driver of acceleration in sea level rise since 1971 as shown in her graph below. 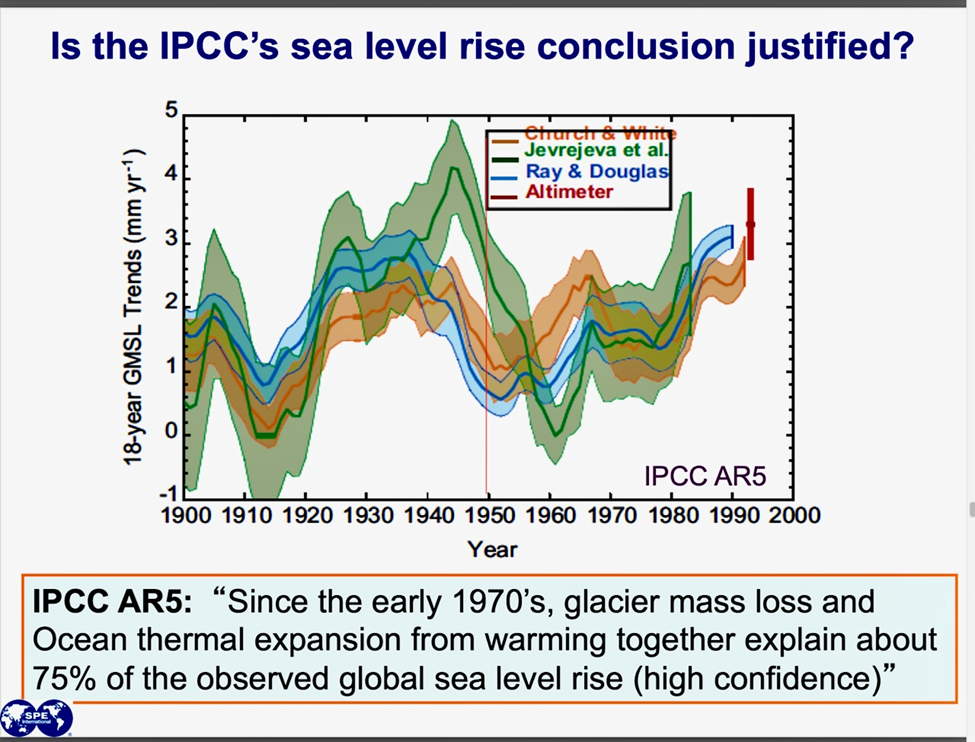 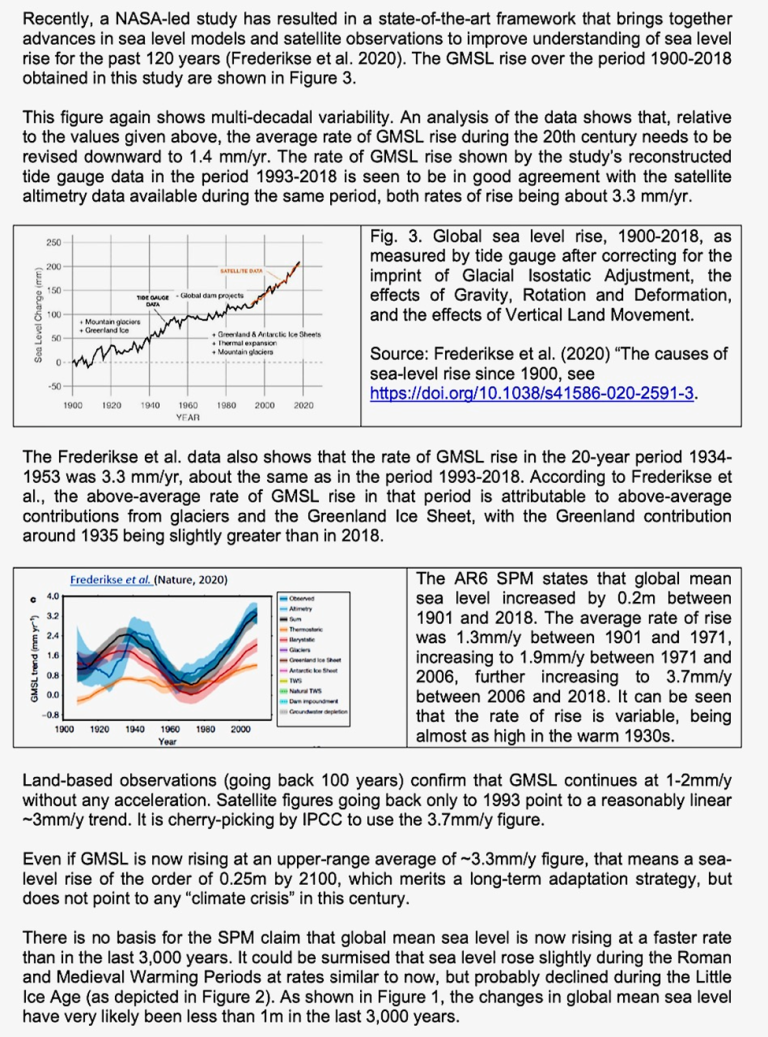 Media hyped claims of Maldives & Pacific-Indian Ocean Island catastrophic sea level rise are unfounded as shown below from the report.

Regarding Ocean Warming and Acidification the CLINTEL reports notes: 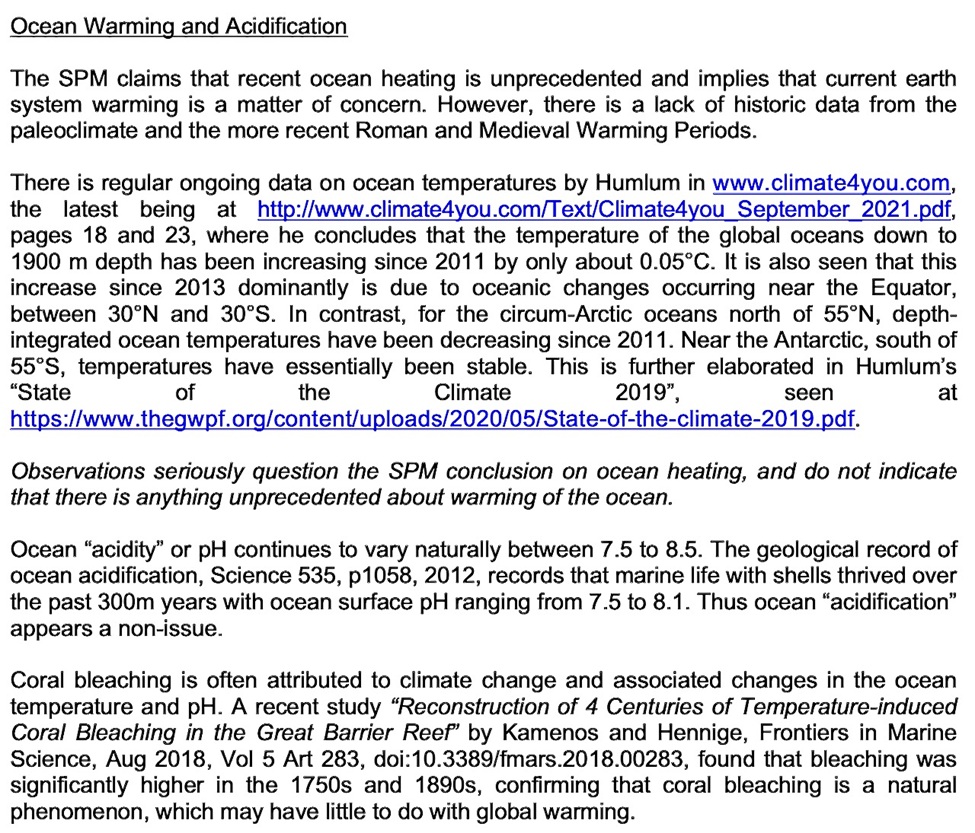 The CLINTEL report next addresses SPM misrepresentations of oversensitivity of climate models. 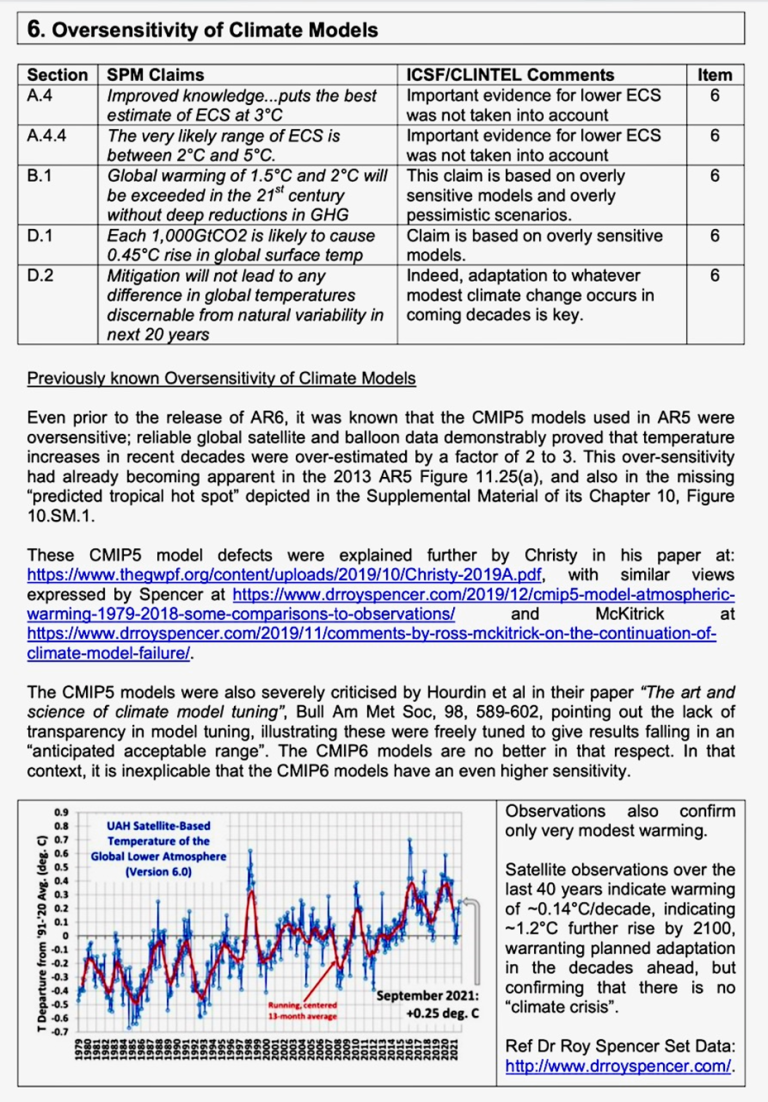 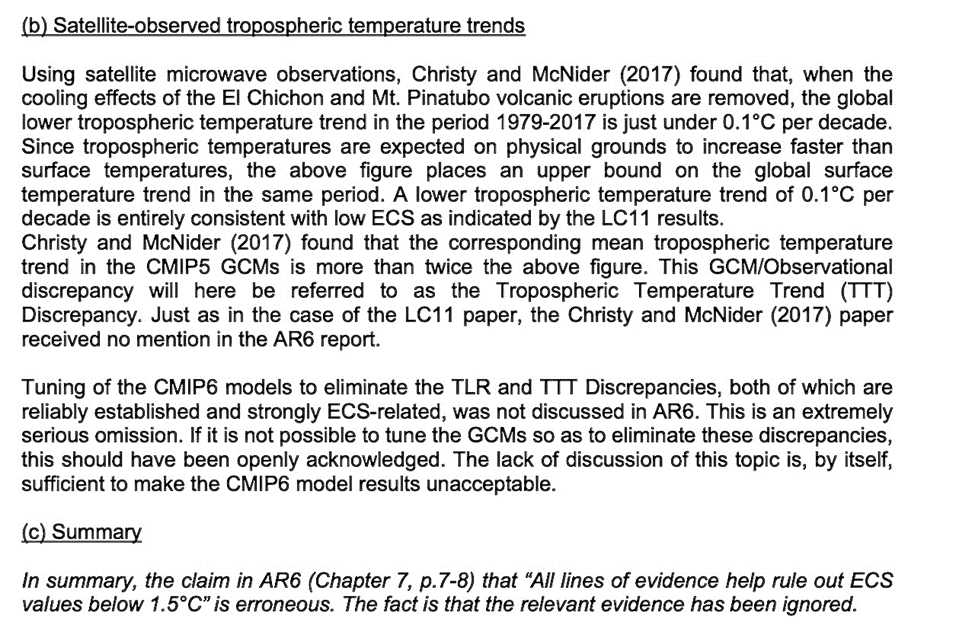 The CLINTEL report includes a brief comment on the importance of adaptation versus mitigation as follows: