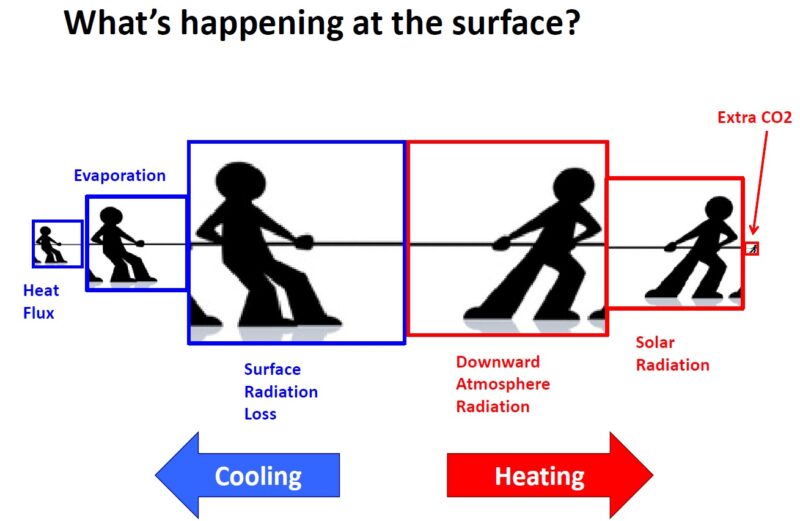 Last night John Christy, the Distinguished Professor of Atmospheric Science and Director of the Earth System Science Center at the University of Alabama in Huntsville, gave an online talk for the Irish Climate Science Forum. The event was organised by Jim O’Brien who is also the Irish ambassador of CLINTEL. Signees of CLINTEL’s World Climate Declaration from all around the world (from Australia to Chili) were attending the meeting and Christy acknowledged that this was probably the first time he gave a presentation to a worldwide audience.

Christy spoke in Dublin in 2019 and in this new talk he gave an update of his ongoing research about testing climate models. The talk was recorded and is online (password S+R$j6N%) accompanied by a transcript of his spoken text.

Christy and his longtime colleague Roy Spencer belong to the most well known climate sceptics in the world. Christy was – as one of the few sceptics – involved in several IPCC reports and he is an expert reviewer of the upcoming sixth IPCC report.

In the beginning of the talk Christy emphasized the huge challenge of climate science: estimating the climate influence of a rather small force (extra CO2) in a huge and complicated climate system. He showed this graph to clarify this point: 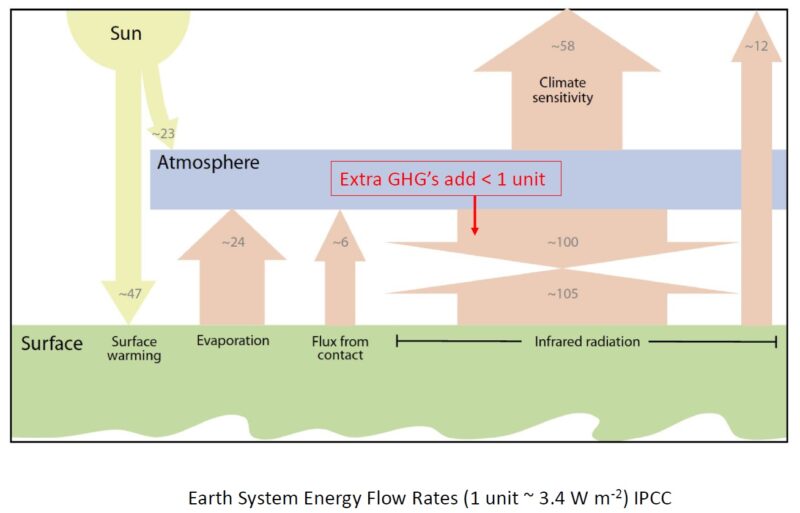 In this simplified picture of the earth’s energy flows the extra greenhouse gases add less than one unit of energy to the surface on a total of 100 units of energy. That brings Christy to the picture at the top of this post where two teams are involved in a tug-of-war and where the “heating team” gets a little bit of help from the extra CO2.

The main job of a scientist is testing hypotheses, said Christy, and in the case of climate change the challenge is to find a suitable and testable hypothesis. Since climate scientists bundle all their knowledge in climate models, the models need to be tested. Christy presented four criteria for this test:

Although the global average surface temperature is by many regarded as the most important metric to assess climate change (and is used by the Paris Agreement to determine an international threshold), that metric is not suitable to test the models because the models are already tuned on them (criteria 3).

Christy and colleagues decided the most pronounced feature in all models is a strong warming high up in the tropical troposphere, also called the tropical hot spot. This feature shows up in all models and disappears when the forcing is turned off. Also, this warming should already have happened in the period 1979-2019 and therefore can be tested against observations from weather balloons and satellites. 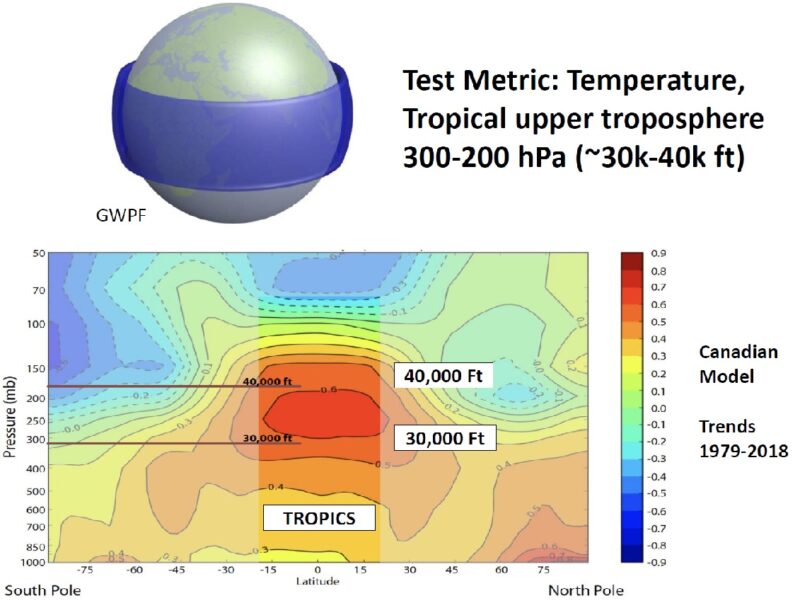 Here is the Canadian model, but all other models show this pronounced warming high up in the tropics. Straight to the results. For the first time Christy presented a comparison between AR6 model trends and observations: 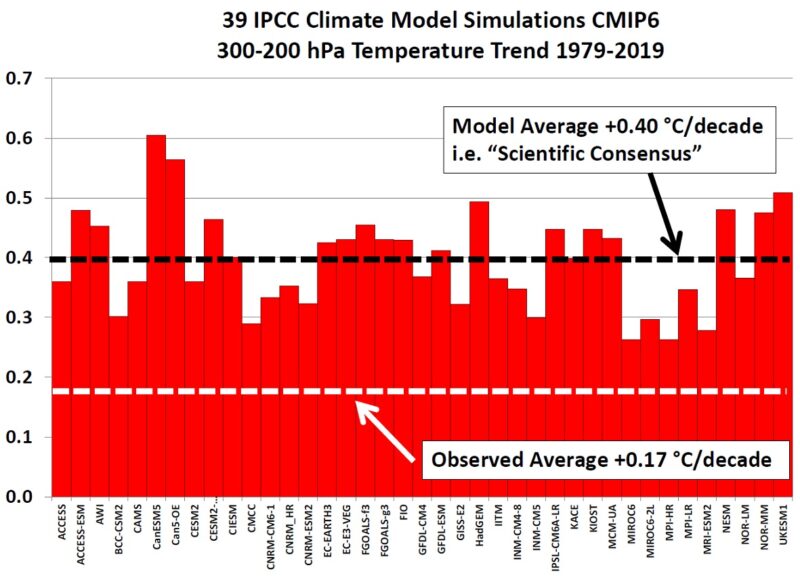 As you can see all the models show considerably more warming than observed and on average the difference is a factor of almost 2.5. Christy also showed plots for all the individual model runs, both of CMIP5 and CMIP6. First CMIP5: 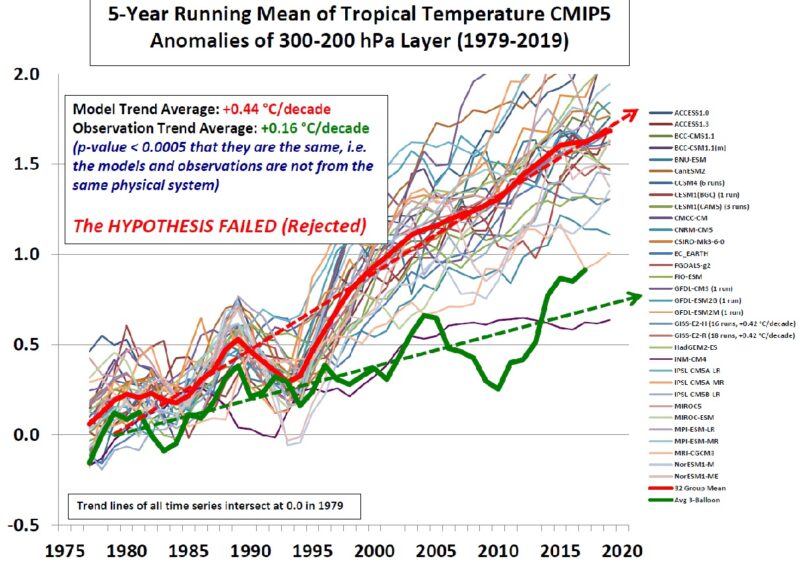 In CMIP6 the situation is slightly different: 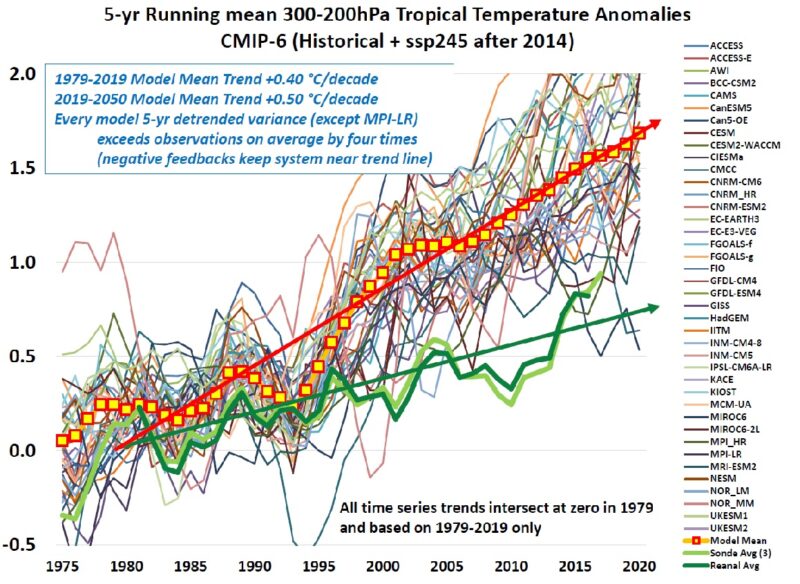 There is one striking difference between CMIP5 and CMIP6. The variability of the models increased, they bounce up and down and much more than the observations do. Christy said this indicates the models underestimate negative feedbacks operating in the real climate system. Models, when they heat up, do not allow enough heat to escape to space. The real climate system has a more effective cooling mechanism than the models.

That was about the main message of the talk. Models still fail the test. Remember that these models contain all the physical knowledge of the current climate science community and are still unable to reproduce fundamental flows of energy.

In the rest of the talk Christy discussed many other aspects of the climate debate: climate sensitivity, trends in extremes (none!), trends in sea ice and snow cover and he showed some interesting graphs about sea level changes. The whole talk is well worth your time.