No Evidence That Climate Change Is Making Droughts Any Worse 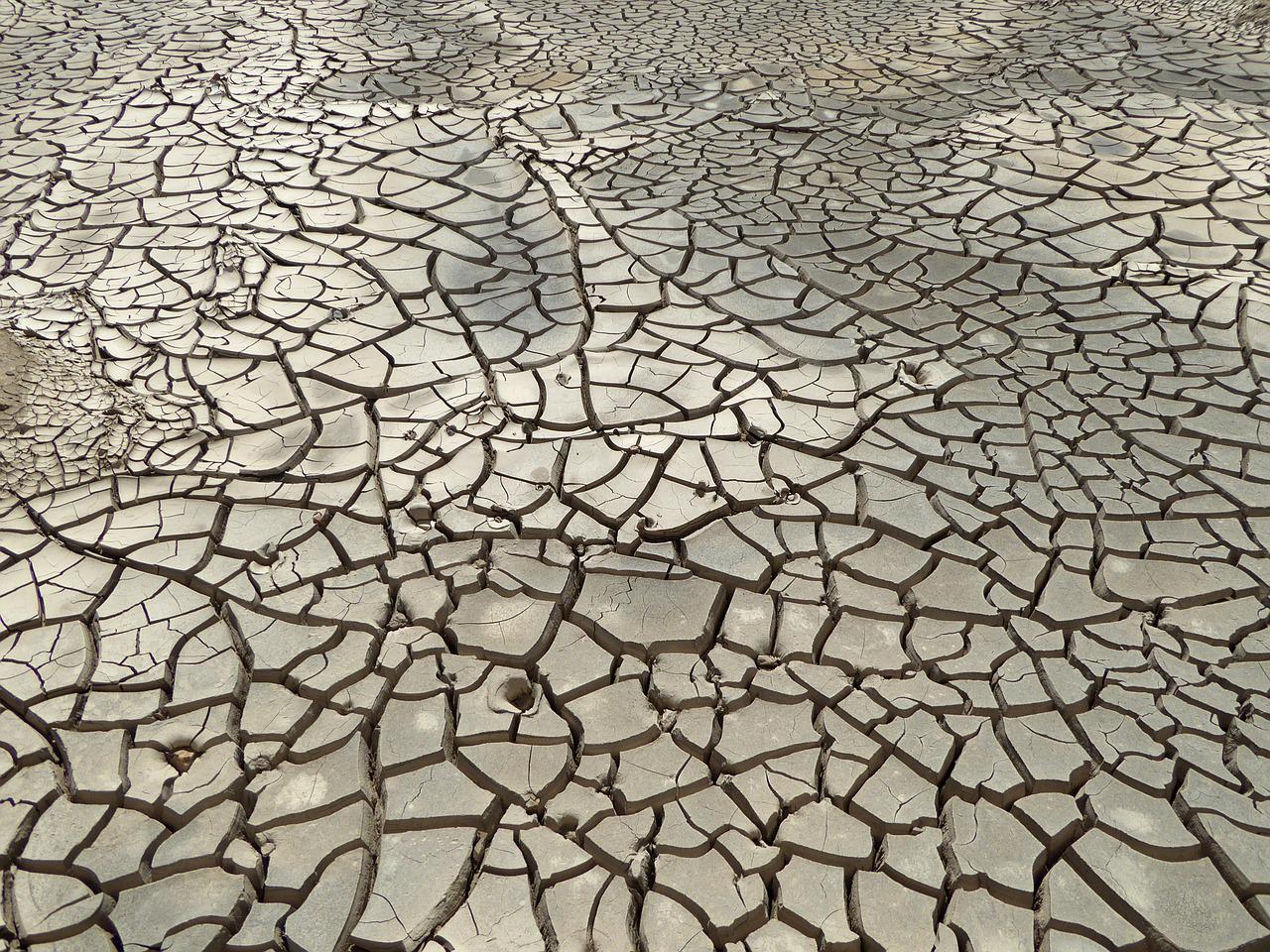 The hullabaloo in the mainstream media about the current drought in Europe, which has been exacerbated by the continent’s fourth heat wave this summer, has only amplified the voices of those who insist that climate change is worsening droughts around the world. Yet an exami­nation of the historical record quickly confirms that severe droughts have been a feature of the earth’s climate for millennia – a fact corroborated by several recent research studies, which I described in a recent report.

The figure below shows a reconstruction of the drought pattern in central Europe from 1000 to 2012, using tree rings as a proxy, with observational data from 1901 to 2018 super­imposed. The width and color of tree rings consti­tute a record of past climate, including droughts. Black in the figure depicts the PDSI or Palmer Drought Severity Index that measures both dryness (negative values) and wetness (positive values); red denotes the so-called self-calibrated PDSI (scPDSI); and the blue line is the 31-year mean. 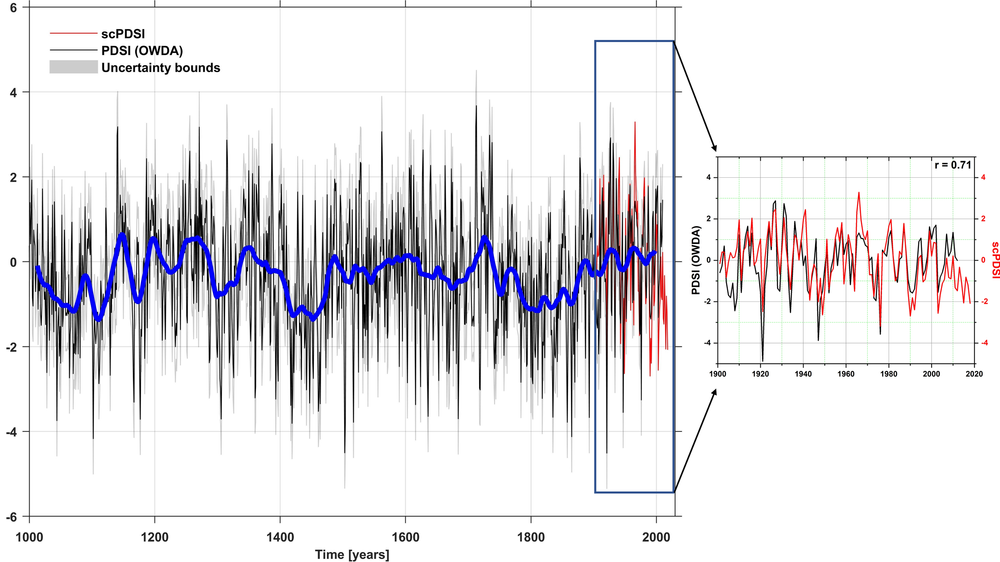 You can see that historical droughts from 1400 to 1480 and from 1770 to 1840 were much longer and more severe than any of those in the 21st century, when modern global warming began. The study’s conclusions are rein­forced by the results of another recent study, which failed to find any statistically significant drought trend in western Europe during the last 170 years.

Both studies give the lie to the media claim that this year’s drought is the “worst ever” in France, where rivers have dried up and crops are suffering from lack of water. But French measurements date back only to 1959: the media habitually ignores history, as indeed does the IPCC (Intergovernmental Panel on Climate Change)’s Sixth Assessment Report in discussing drought and other weather extremes.

And while it’s true that the 2022 drought in Italy is worse than any on record there since 1800, the 15th century was drier yet across Europe, as indicated in the figure above.

Another study was able to reconstruct the drought pattern in North America over the last 1200 years, also from tree ring proxies. The reconstruction is illustrated in the next figure, showing the PDSI-based drought area in western North America from 800 to 2003, as a percentage of the total land area. The thick black line is a 60-year mean, while the blue and red horizon­tal lines represent the average drought area during the periods 1900–2003 and 900–1300, respectively. 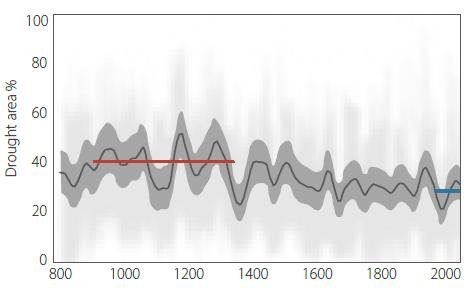 The reconstruc­tion reveals that several unprecedently long and severe “megadroughts” have also occurred in western North America since the year 800, droughts that the study authors re­mark have never been experienced in the modern era. This is em­phasized in the figure by the comparison between the period from 1900 to 2003 and the much more arid, 400-year interval from 900 to 1300. The four most significant historical droughts during that dry interval were centered on the years 936, 1034, 1150 and 1253.

As evidence that the study’s conclusions extend be­yond 2003, the figure below displays observational data showing the percentage of the contiguous U.S. in drought from 1895 up until 2015. 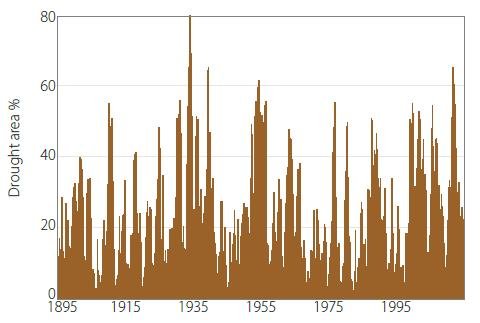 Comparison of this figure with the yearly data in the previous figure shows that the long-term pattern of overall drought in North America continues to be featureless, despite global warming during both the Medieval Warm Period and today. A similar conclusion was reached by a 2021 study comparing the duration and sever­ity of U.S. hydrological droughts between 1475 and 1899 to those from 1900 to 2014. A hydrological drought refers to drought-induced decreases in streamflow, reservoir levels and groundwa­ter.

A very recent 2022 paper claims that the southwestern U.S. is currently experiencing its dri­est 22-year period since at least the year 800, although it does not attribute this entirely to climate change. As shown in the figure below, from another source, the years 2000-2018 were the second-driest 19-year period in California over the past 1200 years. 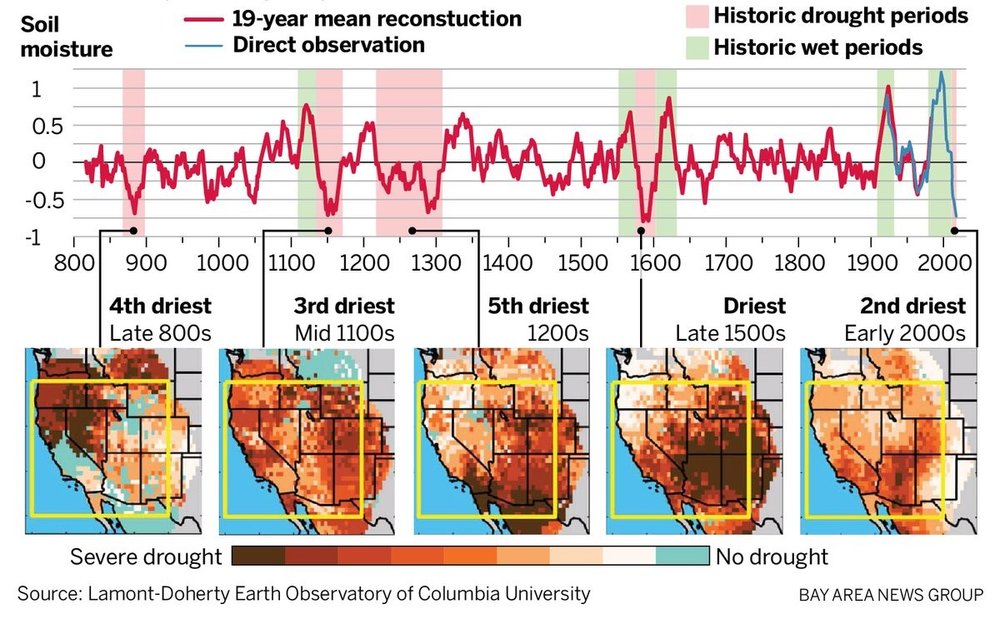 However, although the third-driest period in the 1100s and the fifth driest period in the 1200s both occurred during the Medieval Warm Period, the driest (1500s) and fourth-driest (800s) periods of drought occurred during relatively cool epochs. So there is no obvious connection between droughts and global warming. Even the IPCC concedes that a recent harsh drought in Mada­gascar cannot be attributed to climate change; one of the main sources of episodic droughts globally is the ENSO (El Niño Southern Oscillation) ocean cycle.

Regional variations are significant too. A 2021 research pa­per found that, from 1901 to 2017, the drought risk increased in the southwestern and southeastern US, while it decreased in northern states. Such regional differences in drought patterns are found throughout the world.