About 20% of the PAGES 2019 proxies are 50 Asian tree ring chronologies, all of which were originally published as chronologies in PAGES (2013). At the time, none of these series (and certainly not in these digital versions, had ever been published in technical literature, peer reviewed or otherwise. Nothing in the Supplementary Information to any of these articles says who calculated these chronologies or how they were calculated. PAGES (2017) does cite a couple of academic articles (especially Cook et al 2013) for many of these series, but none of these chronologies actually appears in any of these academic articles or their supplementary information.

PAGES (2013) was originally rejected by Science in 2012, because peer reviewers (including Michael Mann) objected to the introduction of so many new proxies in what was ostensibly a review paper; they sensibly recommended that components first be peer reviewed in relevant specialist journals. However, PAGES2K results had already been incorporated into a pending IPCC assessment (AR5), so the authors, now under a very short deadline, submitted to Nature, which was confronted by the same review problems that led to the rejection by Science. Keith Briffa had a clever, too clever, solution: publish the PAGES2K submission as a “Progress Article” – a classification that did not require the peer review procedure required for a Research Article. This would qualify the article for IPCC and nobody would notice the sleight-of-hand. (Even I didn’t notice it at the time; someone told me.)

One of the consequences of the 2013 manoeuvring was that several hundred Asian tree ring chronologies were introduced to paleoclimate archives with no technical publication or technical peer review, no information on how they were calculated or even who among the PAGES2K (2013) authors had calculated them.

Having been introduced through the back door, so to speak, nearly all of the 200+ Asian tree ring chronologies were carried forward into the PAGES (2017) compilation, and then a subset of 50 chronologies (more or less the most hockey stick shaped) was screened to become a substantial component of PAGES (2019) – the source of the IPCC Summary for Policy-makers Hockey Stick.

In an earlier post, I had commented on the extreme closing uptick in one of these series (Asia_207). In 2013, despite PAGES2K’s professed insistence on using proxies with public archives, measurement data for this chronology was not available, so it was impossible to see what was going on at the time. 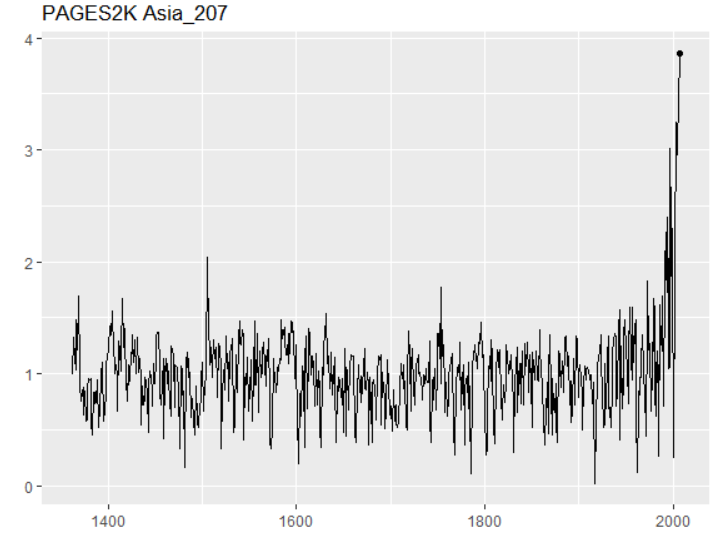 In the SI to PAGES (2017), the data is cited to the site denoted by NOAA as paki033, a site located in a mountainous region in northern Pakistan near Gilgit. As a short editorial digression, I visited Gilgit briefly in 1968 and was there when we learned, via shortwave radio, that Bobby Kennedy had been assassinated. Twenty years later (1988), Osama bin Laden, then a CIA protege, announced himself by slaughtering the Shia population of Gilgit. (In today’s US intel nomenclature, since they were Shia, the murdered Shia would presumably be labeled as “Iran-backed” as though that were both justification and sufficient explanation.)

But back to main programming.

Measurement Data and Chronology Construction
From the measurement data for paki033.rwl at NOAA, I calculated a site chronology using the rcs function from Andy Bunn’s dplR package. The resulting chronology does NOT have the huge uptick of PAGES2019 – indeed it declines over the 20th century. (Diagram below used dplR function – see script below). 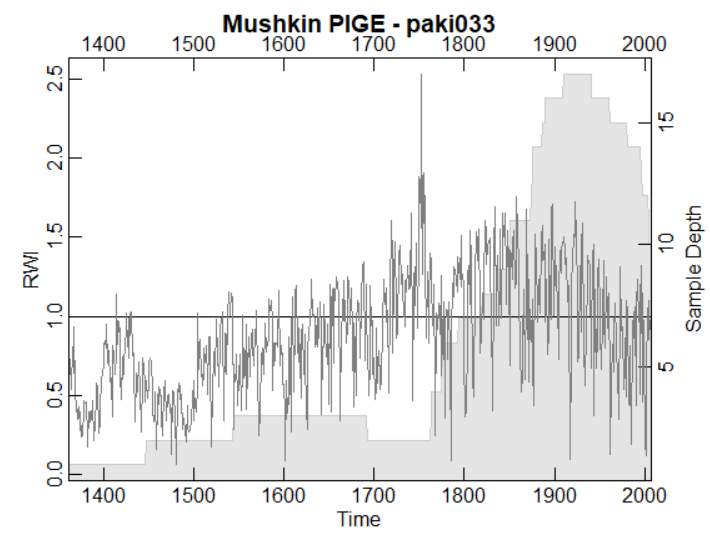 Code for this diagram is as follows:

I got an almost identical chronology by fitting a single Hugershoff curve (rw = A+B* (x^D)*exp(-C*x) to allow for growth prior to chronology calculation. 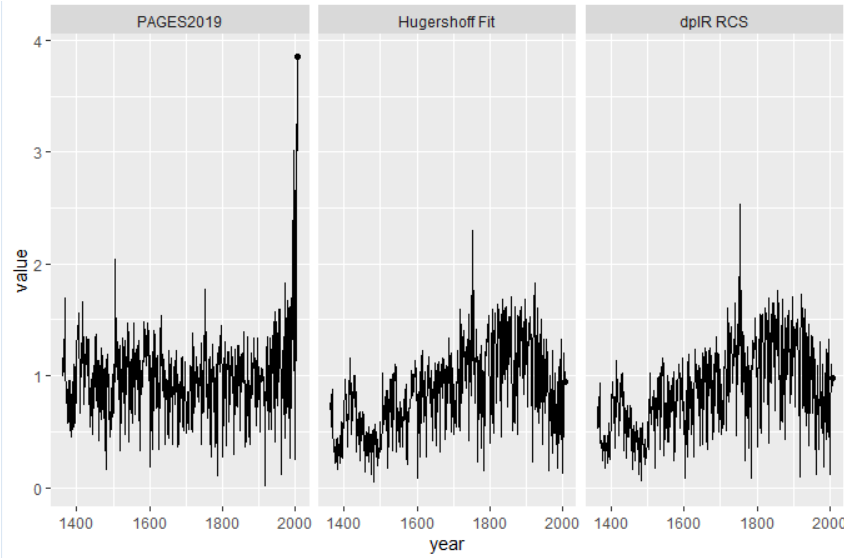 An observation here: although the overall appearance of the chronologies is very different, there is a high correlation (~0.5) between the PAGES version and the other versions – that high a correlation strongly indicates to me that they are representing the same data. (Also the start and end dates of the PAGES2K version exactly match the measurement data.)

What could possibly account for the huge uptick in the PAGES version? It turns out that the paki033 dataset consists of only 10 trees (18 cores). Only two of the trees are dated prior to the 18th century – well below usual minimums for calculating a chronology. Only 6 trees have cores extending to the last year (2007). This is a very small total – indeed, so small that it’s possible to plot actual measurements for all 6 trees very easily so we can look for ourselves at what’s going on. 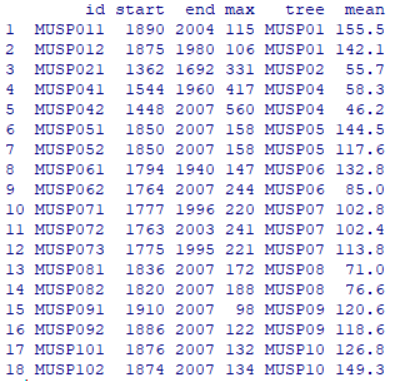 Here is a plot of actual measurements for the two cores from each of six trees for the period 1700-2007. One tree (MUSP04) is relatively old and slow-growing. Most of the trees were relatively young (dating from 19th century) and showed characteristic decline in measured ring width as the tree got older (and diameter increased.) Nothing in this data shows an upspike in 2007. 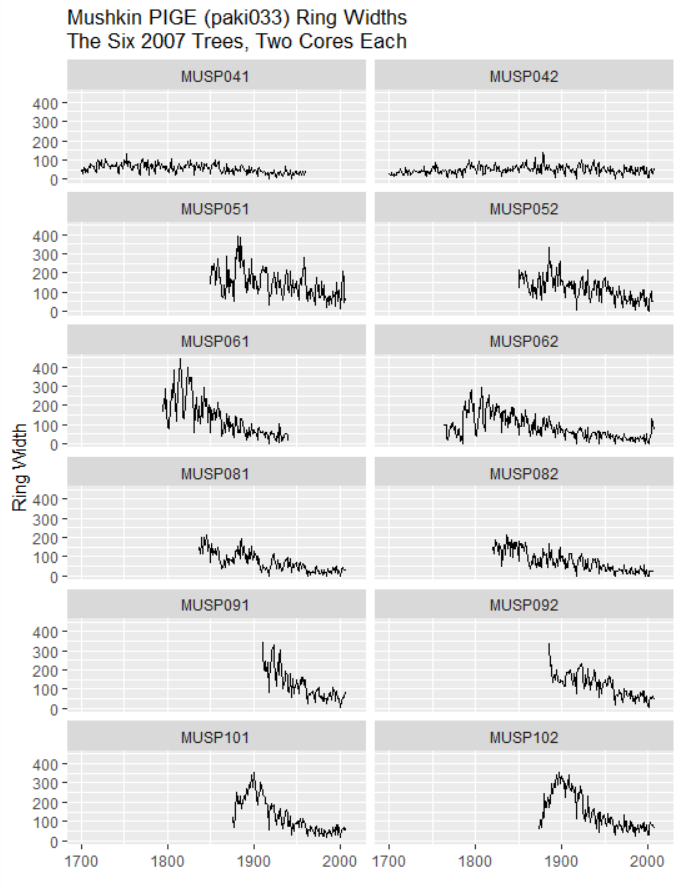 So who calculated the Asia_207 chronology? And how was it calculated?

At the time (2013), Briffa and Melvin of the University of East Anglia were hyping a method that they called “signal-free” tree ring chronology calculation, which, in the examples that they showed, resulted in a more HS-shaped chronology than produced by ordinary chronology. It’s possible that the PAGES2K chronology was produced with some variation of this method. Melvin’s article does not provide a clear description of the mathematical procedure in their algorithm. They used ugly Fortran code that might be possible to figure out. But it takes time to parse this stuff and, without knowing for sure that this technique was used in PAGES2K, I’ve got other things to do.

But, even if the chronology calculation can be determined to be Melvin’s method (or some equivalent), this example ought to raise serious issues about the validity of the method- whatever it was. There is nothing in the actual ring width measurements that justifies the huge upspike in the archived PAGES2K Asia_207 chronology. The implication is that there is something wrong with the chronology algorithm used by PAGES2K (2013) authors. If so, the defect would affect not just the Asia_207 chronology, but a vast swathe of other PAGES2K chronologies relied upon in the IPCC diagram. I checked a couple of others and was unable to replicate them either.

As a caveat, I’m not saying that “everything” in the IPCC diagram stands or falls with this particular issue. There are many issues with this diagram – I listed many in my first post on this topic and am aware of many aware. It’s possible that I’ve overlooked something. If a possible error in this analysis is identified, I’ll promptly evaluate and amend if required.