My last post compared actual sea-surface temperature (SST) estimates to one another to see how well they agreed. It was not a pretty sight; the various estimates covered a range of global average SSTs from ~14°C to almost 20°C. In addition, some SSTs were declining with time and others were increasing. While I did check the latitude range of each of the grids I averaged, John Kennedy (HadSST climate scientist in the UK MET Hadley Centre) pointed out that I did not check the cell-by-cell areal coverage of the HadSST grid, relative to the NOAA ERSST grid. He suspected that the results I presented were mostly due to null grid cells in HadSST that were populated by interpolation and extrapolation in the ERSST dataset. The original results were presented in Figure 6 of my previous post which is Figure 1 here. 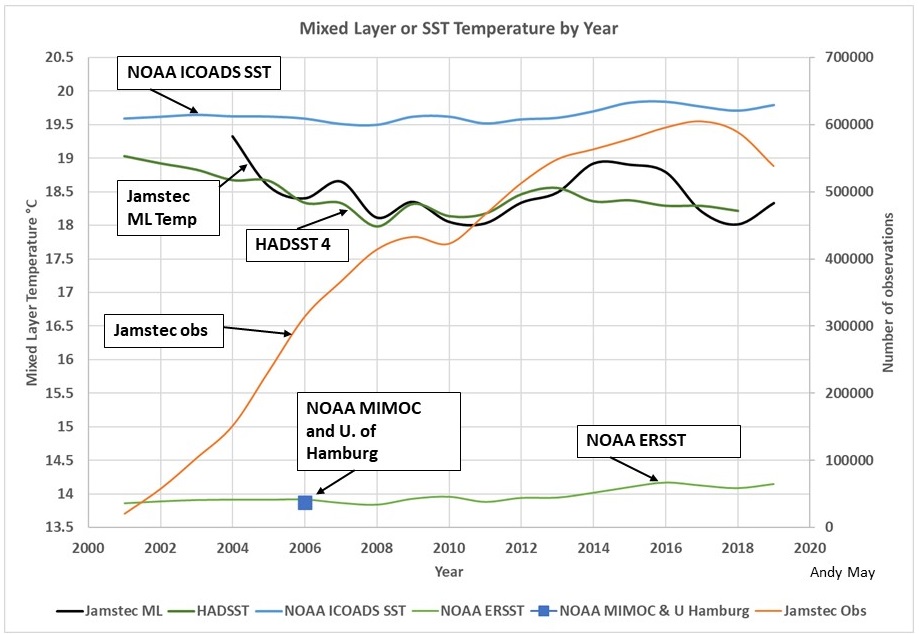 Figure 1. The original comparison of ERSST and HadSST from my previous post.

I asked Kennedy if he had a mask of the populated area in his SST grid, but he didn’t, which was unfortunate. A mask is a latitude and longitude enclosure that can be digitally overlain on a map and used to clip any data that falls outside it. Further Kennedy pointed out that the mask changes month-to-month since much of the data are from ships, drifting buoys and floats. Too bad, more work for me.

HadSST is a five-degree by five-degree latitude and longitude grid and ERSST is a two-degree grid. They are not even multiples of one another, so creating a mask of null areas in HadSST that can be used to clip ERSST data is complicated and time consuming. Fortunately, after programming two “clever” solutions that failed, I was successful in my third attempt, although my computer may never be the same again. The “clever” methods would have saved computer time, but neither worked. In the end I used a “brute force” method, which was an awful looking five-deep computer loop, comparing every grid-cell to every grid cell. Ugly, but it worked, and it is relatively safe from errors.

The results of my ugly logic are show in Figure 2. This figure shows the original NOAA ERSST record, which is identical to the line in Figure 1, the “HadSST masked” ERSST record, and HadSST itself, which is also the same as in Figure 1. At least HadSST falls in between the two NOAA lines. 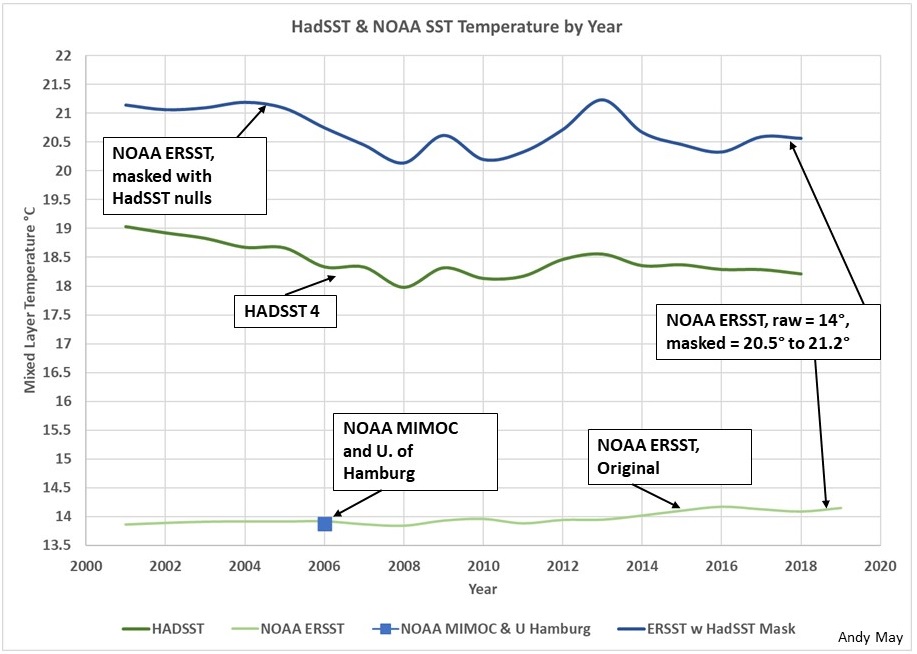 Figure 2. The NOAA ERSST global average temperature before the HadSST mask is applied original) and after it is applied. HadSST is also shown.

We remember from the first post that HadSST is constructed by averaging the points within each 5-degree grid cell. If there are insufficient points in a cell, the cell is left null. NOAA starts with essentially the same data but use a different method to populate their cells. They use a gridding algorithm that populates each of their 2-degree cells with interpolation and some extrapolation. In this way they get a grid that has many fewer null cells and nearly global coverage. Since most of the HadSST null cells are near the poles, the NOAA ERSST record has a lower temperature, as seen in Figures 1 and 2. To illustrate the difference, it is instructive to look at a portion of the original 2-degree ERSST grid, see Table 1. The area shown is in the Arctic ocean, north of Russia and Alaska.

Table 1. A portion of the ERSST 2-degree grid of 2018 SSTs in the Arctic Ocean, north of Alaska and Russia. Notice the constant “fill” value of 1.8°C over much of the area. 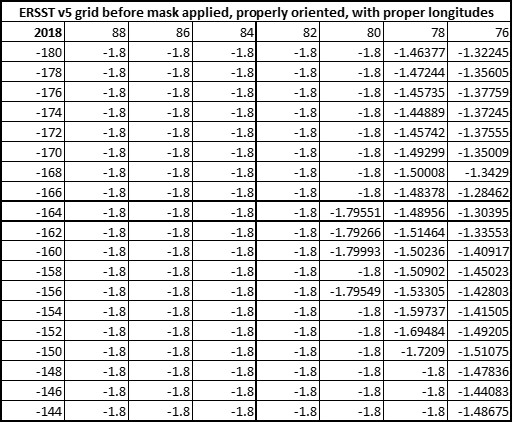 Next, we will look at the HadSST grid over the same portion of the Arctic Ocean in Table 2. These values are not temperatures, but the number of 2018 null months for that cell. Using our methodology of only allowing one null month in a year, only one of these cells, latitude = 62.5 and longitude = -177.5, would be used in our average. While the portion of the Arctic Ocean shown in Table 1 is fully populated in the ERSST grid prior to our applying the HadSST mask, all the values become null after applying the mask.

Table 2. Arctic Ocean HadSST grid cells. The values are the number of missing monthly values in 2018.

Figure 3 is the original ERSST average temperature map for 2018. As you can see, it has values over most of the globe, the nulls are generally in the polar oceans under sea ice. The blue patch in the far northwest, north of Alaska and Russia, is the area shown in Tables one and two. Figure 3 is the map representing the lower ERSST line in Figures 1 and 2. The line shows an increasing temperature trend of about 1.6°C per century. 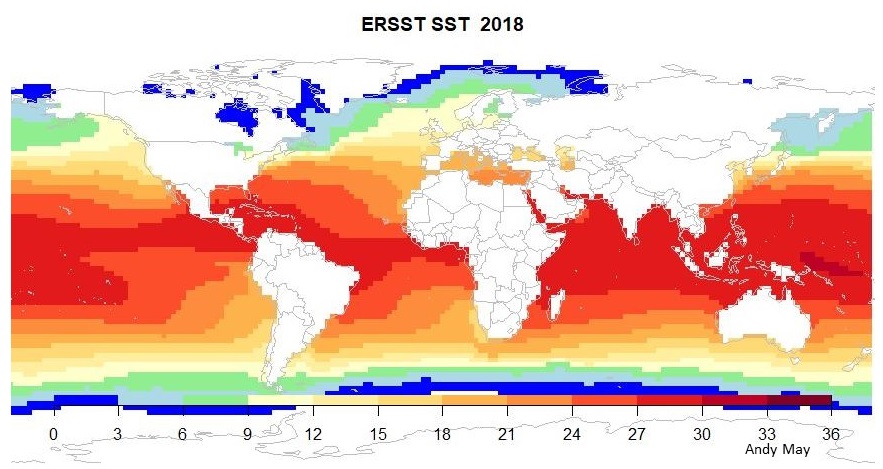 Figure 4 is the same data shown in Figure 3, but every HadSST cell that has more than one month with no value in 2018 has been nulled. Notice that the blue patch north of Alaska and Russia, in the Arctic Ocean, is gone. The null cells are shown in white. We subjectively allowed one month to have no value, but two was considered to be too much. The wide seasonal variations in temperature in the polar regions could have caused more than one null month to affect the average. The uppermost line in Figure 2 is represented by Figure 4. The line lies between 20°C and 21.5°C. By masking the exact cells where HadSST had more than one null month, the ERSST average jumped from 14°C to 21°C, an increase of 7°! Further, the new line is more than 2°C warmer than HadSST. The new ERSST line has also reversed its trend, it now shows a declining temperature trend of 3.5°C/century, almost exactly the same as HadSST (3.48°C/century). 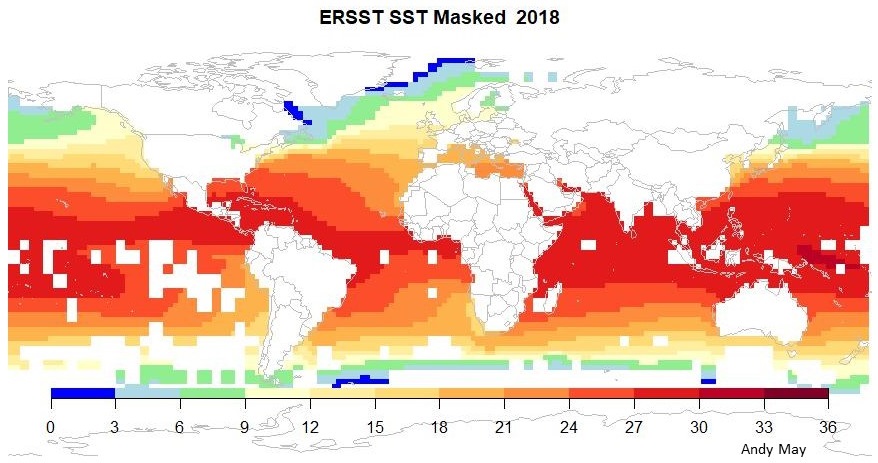 Figure 5 shows the mask used to null the HadSST null cells in the ERSST map in Figure 4. The colors in Figure 5 represent the number of HadSST missing monthly values. We allowed one missing month, so some of the blue cells are nulled, those that represent “1” and some are not, those that represent “2.” All other colors are nulled. White regions have no missing months. Please be aware that the shapes in Figure 4 will not match the shapes in Figure 5 exactly. The ERSST grid is a 2-degree grid and we are applying a 5-degree grid mask to it. To do this I had to search 2.5 degrees in all directions from every cell and populated a two-degree cell grid with the missing months from a five-degree grid. This process is as exact as possible, but it can distort the null areas by up to one two-degree cell. There is no more accurate way to do it without having two grids with matching grid-cell sizes. 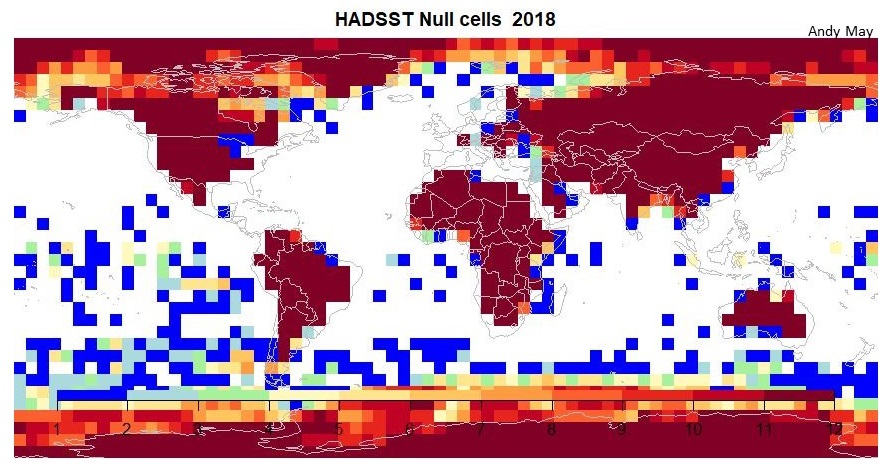 John Kennedy was quite correct that applying the HadSST null mask to the NOAA ERSST record made a difference, the average global temperature jumped 7°C! Perhaps more importantly, the trend reversed from a warming trend of 1.6°C/century to a cooling trend of 3.5°C/century. Since the polar regions contain most of the newly nulled cells, one could conclude that the polar regions are warming quite a lot and the rest of the world ocean is cooling. This is consistent with observations, especially in the region around the North Pole. But it is not consistent with the “CO2 control knob” hypothesis (Lacis, Schmidt, Rind, & Ruedy, 2010). If rising CO2 is causing recent warming, why would most of the world be cooling?

We will not judge which estimate of global ocean surface temperature is superior, both have utility. The HadSST estimate accurately reflects the underlying data, averages represent data better than interpolation and extrapolation. Yet, if the goal is to try and provide the best global average temperature estimate possible with the data we have, then the ERSST grid is better. Our goal was to compare the two grids without using anomalies, which are not needed here. Kennedy’s comments helped us do that and we are grateful for the help. The result shows that while the ERRST estimate, which falls on the University of Hamburg and the NOAA MIMOC multiyear estimates, is probably the best estimate of global ocean surface temperature, it is speculative. The true ocean measurements, well represented by HadSST, do not support ERSST. Thus, while ERSST’s estimate is logical, it does not derive from the underlying data. Just because a map looks like you think it “should” look, doesn’t make it right.

We can also conclude that we have no idea what the global average surface temperature of the oceans is or whether it is warming or cooling. The data plotted in Figures 1 and 2 show a huge range of temperatures, and all based on essentially the same the raw data. The error implied by the estimates is, at least, ±3.5°C. The HadSST/ERSST estimated warming, via unnecessary and misleading anomalies, is 1.7°C/century for this 19-year period. Yet both HadSST and ERSST actual temperatures show cooling of 3.5°C/century over the same period.

Anyone who thinks they know what the climate is doing today or will do ten years in the future, just isn’t paying attention. It should be obvious to everyone that the oceans are the single most important driver of our long-term climate and the records that we rely upon to tell us what sea-surface and mixed layer temperatures are doing are not up to the task. You might as well use dice to choose a temperature.

I processed a lot of data to make this post, I think I did it correctly, but I do make mistakes. For those that want to check my work, you can find my R code here.

None of this is in my new book Politics and Climate Change: A History but buy it anyway.