The Real World of GHG Emissions and Growth

Many people in Europe and North America today take it for granted that what the countries of “the west” decide to do in political and policy terms will lead, or at least set the broad agenda for, the whole world. This perception influences how people view climate change policy. Those who accept the thesis that human greenhouse gas emissions are causing catastrophic climate change may assert, in the face of little dissent, that the “leadership” of western countries will cause the entire world to alter the ways that it produces and uses energy so as radically to reduce emissions. In this article, I will try to show how reality differs from this perception.

In addition, I will try to show why, over the period to 2050, the “west” will be surpassed by at least two, and possibly more, global economic powers that will be the real “leaders” with respect to emissions decisions. 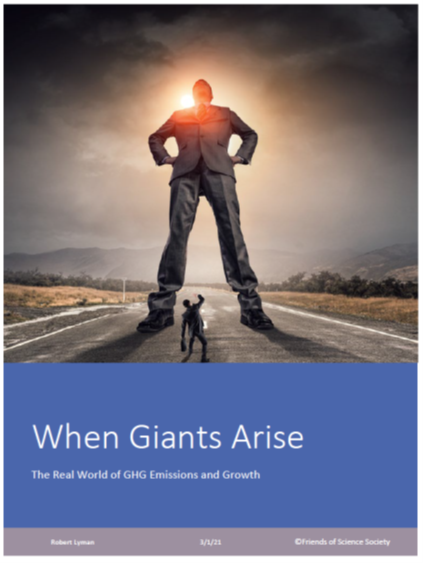 The history of international climate diplomacy since 1992 can be described as elaborate in process and meagre in results. The period from 1992 to 2015 was spent in repeated but failed efforts to impose collective and enforceable emissions reduction requirements. With very few exceptions, no country ever met the targets set. After 19 conferences of the Parties to the Framework Convention on Climate Change, the countries of the world gave up on collective target-setting and switched to efforts to promote country-specific measures aimed at the nebulous and arbitrary goal of restraining global temperature increases to less than two degrees Celsius by 2100. The agreement reached at the 2015 Paris Conference required countries only to submit voluntary emission reduction plans every five years. Neither China nor India, the two fastest growing sources of GHG emissions, committed to make reductions by 2030.

This diplomatic activity has completely failed to alter the growth in global carbon dioxide emissions. They rose from 22.45 billion tonnes per year in 1990 to 35.8 billion tonnes in 2016, an increase of 59%. They continued to rise until the onset of the COVID-19 pandemic. While the countries of the Organization for Economic Cooperation and Development (OECD), at enormous cost, have reduced their emissions, those of the non-OECD countries have risen by almost five billion tonnes per year, and in 2019 constituted 65% of global emissions.

The projected trends in population, economic growth and energy markets virtually guarantee that these trends will continue. According to United Nations data, the global population will grow by more than two billion people between 2018 and 2050, and almost all of this growth will be in Asia and Africa. Europe and North America, which had only 15% of the world’s population in 2018, will see that share shrink to 11% by 2050. 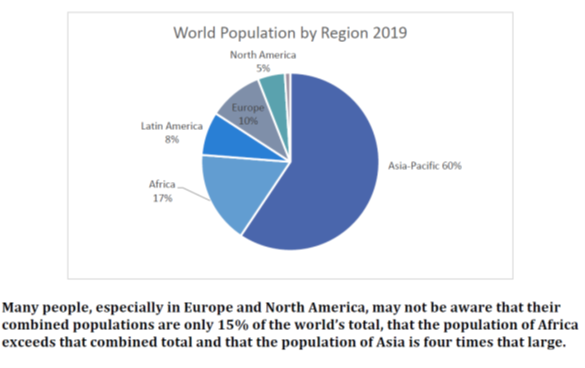 A 2017 report by Price Waterhouse Cooper (PWC) offered excellent analysis of the likely patterns of economic growth by region and country to 2050. Among other things, the report found that the world economy could more than double in size by 2050, far outstripping population growth, due to continued technology-driven productivity improvements. Further, emerging markets (E7) could grow around twice as fast as advanced economies on average. (The E7 countries are China, India, Brazil, Russia, Indonesia, Mexico, and Turkey. The G7 countries are the United States, Germany, Japan, the United Kingdom, France, Italy, and Canada.) As a result, six of the seven largest economies in the world are projected to be emerging economies in 2050 led by China, India, and Indonesia. The United States could drop to third place in the GDP rankings, and the European Union share of world GDP could fall below 10% by 2050.

The United States Energy Information Administration, in its 2019 International Energy Outlook report projected the trends in global energy supply, demand and emissions to 2050. Its economic projections broadly coincided with those of PWC. Overall, the 2019 EIA Outlook projected world energy consumption to rise nearly 50% between 2018 and 2050, due almost entirely to strong economic growth, increased access to marketed energy, and rapid population growth in the non-OECD countries. World energy-related CO2 emissions are projected to grow at an average rate of 0.6% per year between 2018 and 2050, with the rate of growth in the non-OECD countries at about 1% per year. In other words, the EIA projects global CO2 emissions to grow from about 34 billion tonnes in 2018 to 43 billion tonnes in 2050. 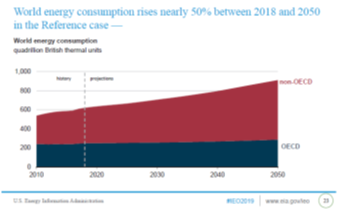 This is a long, long way from the “net zero emissions” targets that environmental groups and some western governments are imposing on their citizens. If such emissions reductions were feasible, and if all OECD countries attained them, but emissions growth continued in the non-OECD as now projected, by 2050 global emissions would be about 29 billion tonnes per year, only 16% below the 34.2 billion tonnes of global emissions in 2019.

Whatever “leadership” western countries may have enjoyed in the past is fast being overtaken by the economic and population growth in the non-OECD countries and especially in Asia.

Just as China has over the past few decades taken its place as one of the largest and fastest growing economies in the world, a number of other “giants” are waiting in the wings, ready to take their places among the centres of global economic activity, with standards of living that approach those in the G7 countries today. Those waiting giants notably include India, Indonesia, Brazil, Mexico, Saudi Arabia, and Nigeria. Their rapidly increasing populations and economies will require much more energy, including the hydrocarbons like coal, oil, and natural gas the countries of the west relied on during their ascents to prosperity and world influence. With its ever-declining shares of global population and income, “the west” will not be able to constrain the aspirations, or the emissions, of the emerging giants.

Robert Lyman is an economist with 27 years’ experience as an analyst, policy advisor and manager in the Canadian federal government, primarily in the areas of energy, transportation, and environmental policy. He was also a diplomat for 10 years. Subsequently he has worked as a private consultant conducting policy research and analysis on energy and transportation issues as a principal for Entrans Policy Research Group. He is a frequent contributor of articles and reports for Friends of Science, a Calgary-based independent organization concerned about climate change-related issues. He resides in Ottawa, Canada. Full bio.