A Much Larger Greenhouse Effect – But Temperatures Dominated by Cooling

Foreword Especially for Policymakers
The greenhouse effect appears to be much higher than previously assumed. However, that also means that the greenhouse effect does not determine the temperature. Earth’s temperatures are way lower. The level of Earth’s temperatures appears to be completely dependent on cooling by the H2O molecule that has been able to keep Earth’s temperatures within narrow limits for four billion years. Given the enormous power of cooling by means of water vapor, the influence of additional greenhouse gases cannot be more than zero percent. The consequence of what is set out below is that policymakers again have complete freedom in searching for the most practical, the most strategically correct, and the most inexpensive solution for the current (2022) energy problem. All options are open again.

Introduction
Early Earth consisted of hot molten lava covered by an extreme greenhouse atmosphere: hardly any surface radiation could reach space, if any. Nevertheless, its surface cooled. Upward convection brought sensible and latent heat from hot surfaces to elevations on the very edge of the atmosphere from where energy effectively could be radiated into space. Despite the near maximal greenhouse effect the surface of Early Earth cooled down and at a certain moment the first oceans developed. Those boiling oceans still resulted in a huge upward convective transport of energy, further cooling the surface. Until now, convective upward transport of energy plays the main role in surface cooling. Convection sets and regulates surface temperatures at actual level. Without evaporative-convective-cloud-cooling, our actual greenhouse atmosphere would theoretically result in a surface temperature of 202.3°C. On the real Earth the greenhouse effect warms the surface, but greenhouse warming does not set and control final surface temperatures. Earth’s H2O-based cooling system does. 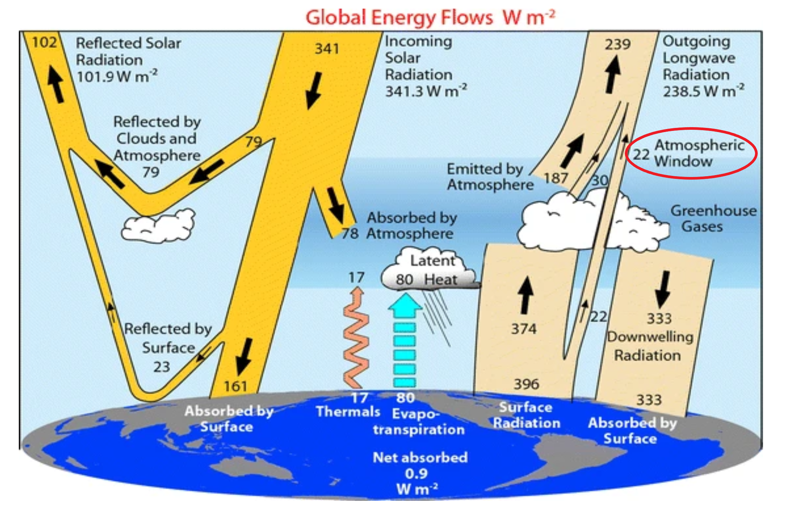 The efficiency of cooling by surface radiation is very low: after absorption, nearly all surface emitted energy returns to the surface as downwelling radiation or (without convection) and stays as sensible heat in the lower atmosphere. Knowing the cooling efficiency of the Earth’s surface radiation, we can calculate the greenhouse surface temperature in the case where the surface of our imaginary planet is only cooled by radiation, as shown in Figure 2. 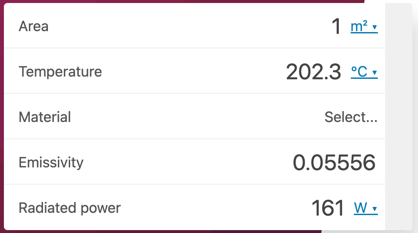 Figure 2: Surface temperature for a theoretical planet, calculated for the case of surface cooling by radiation only. Input: solar radiation absorbed by the surface and surface emitted longwave radiation of 161 W/m2, the effective emissivity is 5.556% (‘Emissivity 0.05556’). Calculation by Stefan-Boltzmann Law calculator.

With Earth’s present greenhouse effect, the surface of our imaginary planet would have had a temperature of 202.3 degrees Celsius, if only cooled by surface radiation. Total initial greenhouse warming is huge, see Table 1.

Given the high initial greenhouse warming effect, on our relatively cool Earth other factors than surface radiation must control the level of surface temperatures; probably H2O-related surface cooling. 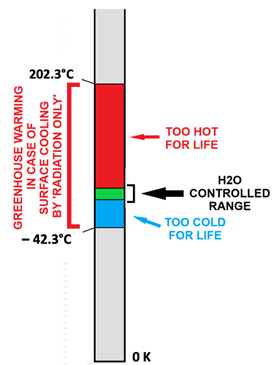 ‘Radiation only’ would have stopped cooling the planet’s surface at 202.3°C. Actual Earth yearly average surface temperatures are much lower, about 15°C. On real Earth, additional cooling by evaporation, conduction, convection and clouds has lowered surface temperatures far below the level ‘radiation only cooling’ would have resulted in. Why? The answer is that H2O-related cooling (evaporative, convective and tropical cloud cooling) is very strong, very dynamic, and very effective in the temperature range above 15°C.

Evaporation
Evaporation rises by 6-7% (Clausius-Clapeyron) per degree of temperature rise, a huge percentage. In the higher temperature range evaporative cooling cools extremely: think about boiling water of 100°C. In case of temperatures lower than 15 degrees Celsius, evaporative cooling diminishes by the same high percentage of 6-7%. At some point H2O related surface cooling and warming resulting from surface solar absorption came into balance at 15°C.

Convection
Convection in the atmosphere is the upward transport of latent and sensible heat from the surface to higher elevations. Convective removal of surface heat effectively cools the surface and brings energy to elevations lacking most of the main greenhouse gas, water vapor. At these elevations emission to space is more effective than surface emission. Convection is highly stimulated by the low-density water vapor molecules resulting from evaporation. Evaporative-convective cooling is huge in the higher temperature range and produces large quantities of solar reflecting tropical clouds. When tropical clouds develop, evaporative surface cooling is combined with diminished surface solar warming: very effective.

Diminishing H2O-based cooling
The whole evaporation-based cooling machine is very dynamic. All H2O-based surface cooling is fueled by rising evaporation, as temperatures rise. But evaporation also strongly diminishes when temperatures fall, even by just one degree, ending further cooling of the surface. At present, the Earth’s[4] total surface cooling and total surface warming are balanced at a yearly average of 15 degrees Celsius.

Initial warming by extra greenhouse gases is fully neutralized like all other surface warming. Neutralizing warming happens at different time scales, sometimes seconds (radiation) or hours, a day, or by season, but often over decades (by longer-term ocean oscillations) and sometimes over even longer periods like the recovery from the cold Little Ice Age which might take centuries.

Why 15°C and why not 202.3°C?
Radiative cooling is less dynamic than H2O based cooling. For one degree of difference in surface temperature, radiative cooling goes up or down by only 1.4%, but H2O- based cooling by 6-7%. Early Earth started hot and then cooled down after its creation. At a current surface temperature of only 15°C (the temperature level for this geological period and for this orbital setting) the H2O related surface cooling has balanced surface solar absorption.

Early Earth
Early Earth was hot and steamy. Heat of accretion did melt all the colliding material coming from space that formed the Earth. A nearly perfect sphere formed and its atmosphere was the perfect greenhouse atmosphere: an atmosphere with a superhigh water vapor content, very rich in carbon dioxide, and a sky covered by clouds. Hardly any surface radiation could reach space without being absorbed. Convection had to transport surface energy to the edge of the steamy atmosphere where spaceward emission could take place. For early Earth surface cooling depended on the strength of convection. As temperatures fell, convective cooling continued but continuously diminished in strength. Tropical cloud coverage also diminished, allowing the Sun to warm the tropical oceans. Despite Earth’s huge greenhouse effect, surface temperatures have never been dependent on the strength of the greenhouse effect but on the temperature set by where H2O-related surface cooling balances warming by rising surface solar uptake.

Intrinsic properties
The fascinating H2O molecule has many intrinsic properties. One of its properties gives the molecules a strong cohesion resulting in a strong surface tension which creates ‘tight’ surfaces some insects can even walk on. Strong surface tension makes it difficult for a surface molecule to escape into the atmosphere, which raises the temperature at which enough water vapor will be released to cause ‘super-convection’. Another intrinsic property sets the freezing temperature at zero degrees Celsius and not at +10, +20 or minus 20 degrees. Binding one oxygen atom to two low-density hydrogen atoms results in a low-density water molecule, so very humid, low density, air easily rises. H2O’s intrinsic properties determine all essential elements of Earth’s main cooling system, which is dominated by H2O. The properties are intrinsic to the molecule itself: they don’t change over time. Therefore, the surface temperature of the Earth could have remained at the same level over billions of years if Earth’s orbital settings and the distribution of oceans and continents over its surface hadn’t changed. H2O’s intrinsic properties set the level of Earth’s surface temperatures for every specific orientation and surface arrangement of the Earth. The H2O molecule, nothing else.

Faint young Sun paradox
During the first years of early Earth, the Sun’s output must have been about 30 percent less intense as nowadays. Less solar energy reached the Earth. Nevertheless, the surface of the Earth has never been much colder than present Earth. This is called the faint young Sun paradox. Knowing the role of H2O-related surface cooling, that paradox is solved. As total insolation reaching the surface is controlled by tropical clouds and the Earth’s surface temperatures are controlled by H2O-related surface cooling, the Earth’s surface temperatures don’t simply depend on the intensity of solar irradiation reaching the Earth. In the case of a faint Sun, evaporation diminishes, less tropical clouds cover tropical oceans and enable more (but weaker) solar rays to reach and warm a larger surface area. End result for tropical oceans: about the same.

No Snowball Earth
Because the quantity of insolation reaching the surface is controlled by tropical clouds and because of H2O-controlled surface cooling, no complete snowball Earth has probably existed. A slightly colder surface strongly diminishes H2O related surface cooling. Diminishing tropical clouds result in a higher uptake of solar energy by tropical oceans. The final result is tropical oceans still remaining warm. On water Earth no full snowball Earth is possible. Even when all present land (29% of the total surface) is concentrated on both poles, the result is just a partial snow- and ice-covered surface. Most of the other 71% of the surface will be covered by relatively warm oceans, oceans that are redistributing tropical absorbed solar energy over mid-latitudes, not hindered by any continent.

Conclusions
The Earth’s greenhouse effect is huge, much higher than normally assumed. If cooled by ‘surface radiation only’ the surface of a theoretical planet would have had a surface temperature of 202.3°C. But the Earth’s surface temperatures are not set by the strength of Earth’s greenhouse effect. Additional H2O-based cooling systems keep the surface at a much lower temperature, balancing rising surface radiation uptake. At present, that balance is reached at a yearly average of 15 degrees Celsius.

Thanks to H2O-related surface cooling the Earth’s surface temperatures are bound to a narrow range, at a temperature level well suited for life on Earth. Due to its stability, life developed over many hundreds of millions of years.

About the author: Wim Röst studied geography in Utrecht, the Netherlands. The above is his personal view. He is not connected to firms or NGO’s or funded by government(s).

Andy May was so kind to correct and improve the English text where necessary or helpful. Thanks! 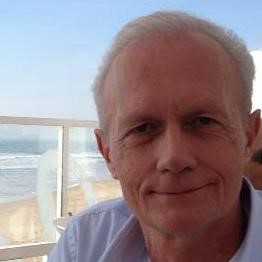 Wim Röst studied geography in Utrecht, the Netherlands. The above is entirely and exclusively his own personal view. He is not affiliated with companies, NGO’s or other organizations, nor is he dependent on government funds. For 10 years he has intensively studied the climate problem. After discovering that water vapor is not only the main greenhouse gas but also the main cooler of the Earth’s surface, he has come to understand the role of water, water vapor and cloud cover. The discovery that the greenhouse effect is actually much greater than previously assumed has put all discoveries in the right place. This article is the direct result.