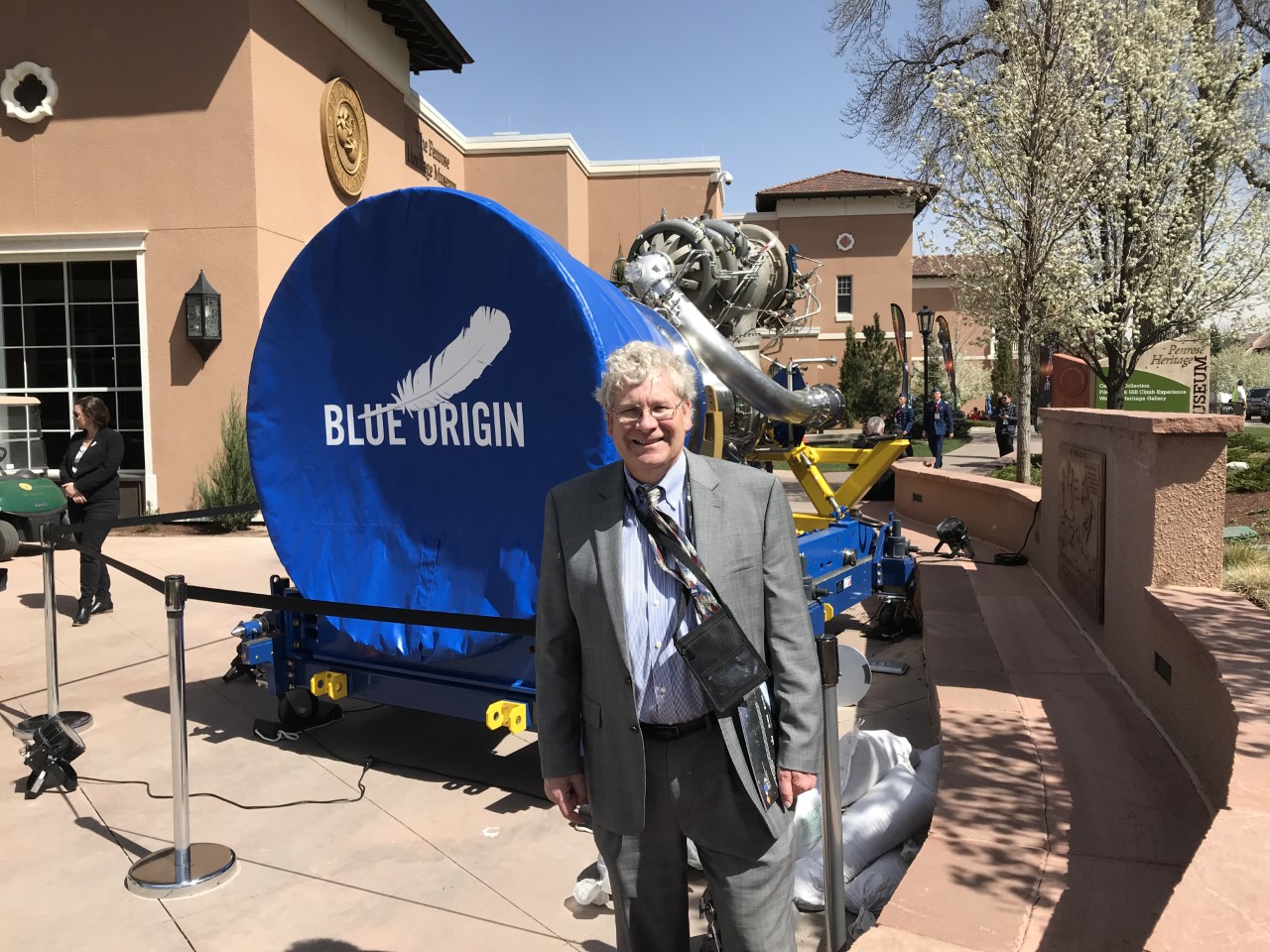 What is your background?
I was born in Atlanta in 1958. My father was a professor of Civil Engineering at Georgia Tech and was eventually inducted into the National Academy of Engineering.

My university training is in physics. I have a bachelor’s degree in physics from Georgia Tech and a PhD in physics from the University of Colorado in Boulder. I’ve lived in Colorado since 1981. My thesis research was in numerical simulations of quarks under the influence of the strong nuclear force using the techniques of lattice gauge theory. This work first exposed me to large scale numerical modelling: its utility and its limitations.

My 30+ years of work experience were entirely within the aerospace industry, starting at Martin Marietta which became Lockheed Martin. I rose through the engineering ranks, working on the Titan and Atlas space launch vehicles. I was the Chief System Engineer for the development of the Atlas V launch vehicle, still active. Atlas V has launched spacecraft to Pluto and Mars as well as dozens of commercial, military and intelligence satellites into Earth orbit. Countless computer models are used in the development of a launch system, but extraordinary care is taken to validate these models given the enormous stakes involved.

In 2006, Lockheed Martin and Boeing formed a joint venture called United Launch Alliance (ULA). I became the Vice President of Business Development and Advanced Programs. I was also responsible for the company’s Washington DC operations that included regular interactions with Congress and the Executive Branch agencies dealing in space activities. I became the Vice President of a newly formed human spaceflight division of ULA that included a human rated version of Atlas to carry the Boeing Starliner capsule and the upper stage of NASA’s SLS rocket whose first launch is imminent.

I ended my ULA career as Chief Scientist and Vice President of Advanced Programs. In that role, I started the Vulcan rocket development program and orchestrated a partnership with Jeff Bezos’ Blue Origin to develop the BE-4 engine. My group developed concepts for fully reusable in space vehicles designed to be refuelled with propellant sourced from space.

In 2017, I retired from ULA and joined the faculty of the Colorado School of Mines. I am part of the world’s first and only graduate program in space resources, devoted to harnessing the vast resources of space for the benefit of humankind. I teach systems engineering and a projects course. My research interest is in developing the water resources of the Moon and asteroids to produce and distribute liquid oxygen, liquid hydrogen propellants. Water is the oil of space!

Since when and why are you interested in climate change?
I have had an intellectual interest in the science of climate change for many decades. As a teenager, I remember the global cooling scare. While a young adult, that morphed into global warming and eventually climate change. From the first, I was sceptical that catastrophic consequences could arise from relatively modest increases in the trace gas CO2. For many years, the climate scare advocates could be dismissed as unserious and relatively harmless. But as their political influence increased, I became more alarmed. Their policy recommendations, if pursued, would destroy the economic foundation that has led to the incredible increase in human flourishing experienced since the Industrial Revolution. That is frankly insane.

In the 2000’s, I began to educate myself on the actual science behind the climate catastrophe claims. I studied climate history over human and geologic scales and read several books on climate modelling. I investigated the actual data on severe weather. In no case did the facts support the catastrophic claims. Nevertheless, many countries are now starting down the path of economic destruction. It must be stopped, and soon.

How did your views on climate change evolve?
I have always been sceptical of climate catastrophe claims. However, it did not really matter so long as those making the claims were on the fringe with little political power. One could laugh it off, like the predictions of mass famine made by Paul Ehrlich and the Club of Rome.

However, over the past decades, the political power of the climate catastrophe movement has grown to the point where it has taken over international organizations like the UN and many of the highest government offices in affluent nations in Europe, North America, and Australia.

My aha moment came when I realized that most of those in positions of power were not particularly worried about the climate crisis per se but saw it as an opportunity to implement socialist/Marxist policies, i.e., complete government control of the economy, to save us from the claimed climate crisis.

Over time, many of these politicians have become quite open about their aims. For example, Christiana Figueres, former executive secretary of U.N.’s Framework Convention on Climate Change, stated that “this is the first time in the history of mankind that we are setting ourselves the task of intentionally, within a defined period of time, change the economic development model that has been reigning for at least 150 years, since the Industrial Revolution.” A top aide to socialist US Congresswoman Alexandria Ocasio-Cortez admitted that the Green New Deal was not conceived as an effort to deal with climate change, but instead a “how-do-you-change-the-entire economy thing.”

As a scientist by education, I am deeply disappointed by the willingness of the science community to be an accomplice to the takeover. I have no doubt that many scientists really believe that increasing CO2 poses a danger to the climate, but the community has completely abandoned cherished principles of scientific practice and discovery. Honest debate regarding data and research is suppressed and those expressing contrary views are vilified as deniers. Grants for contrary research are denied and papers describing contrary results are refused publication. Even worse, data are manipulated, e.g., the US temperature records, to exaggerate evidence of warming.

Perhaps most egregious, as a long-time developer and user of scientific and engineering models, is the indiscriminate use of unvalidated, even falsified, climate models to predict a crisis in the future. I am a firm believer in the maxim “all models are wrong, but some are useful.” For a model to be useful in a particular domain, it must be validated. Validation is a rigorous process of proving that a model provides a faithful representation of the relevant aspects of the real world. In engineering applications, this usually entails anchoring the model to test data obtained under carefully controlled conditions. This is clearly not possible for climate models.

Furthermore, the usefulness of a model resides in its ability to make accurate predictions. Again, climate models fall short. Current models greatly overestimate the amount of warming experienced over the past 20 years. This problem is finally being recognized within the climate modelling community, who now admit their models “run hot.”

Is climate change a big issue in your country and how do you notice this?
The political left has made climate change a huge issue within the US. Now controlling the White House and both branches of Congress, they have been able to pass harmful and wasteful legislation suppressing the use of fossil fuels and supporting unreliable solar and wind. Many more destructive policies have also been pursued via executive action. Most media in the US are “all in” with the climate crisis narrative. Every adverse weather event is claimed to be due to climate change. It doesn’t matter whether it’s a cold snap, a heat wave, floods or drought, frequent storms, or a lack of storms (like the current lack of Atlantic hurricanes), it’s all due to climate change.

There are still some media that remain skeptical, but they are under increasing attack.

How would climate policy ideally look like in your view (suppose you are the minister for climate)?
I would first eliminate the position of climate minister!

Fundamentally, there is no climate crisis. Any policy that purports to address climate change should be eliminated. Most importantly, we should stop the war against fossil fuels (and nuclear power) and return to a free market approach to energy. In a free market, coal, oil, and natural gas will continue to provide very low cost, efficient, and convenient energy. Abundant, low-cost energy is the key to lifting billions of people out of poverty. We need to return to the trajectory of ever-increasing abundance that has dramatically enhanced human flourishing over the past 150 years. Keeping the climate change boot on the necks of the developing world countries is grossly immoral.

Since climate is always changing regardless of what humans do, we should continue to invest in technologies and infrastructure that enhance resilience to weather events. This policy has resulted in a 50-fold reduction in weather related deaths over the past century.

What is your motivation to sign the Clintel World Climate Declaration?
The current political trajectory in the western world is deeply alarming. It has resulted in the current energy disaster in Europe and the looming one in the US, Canada and Australia. The time is now to reverse course. Ordinary people are waking up. The Covid experience revealed the corruption and ineptitude of so-called experts. The same corruption and ineptitude lie behind “climate science.”

The Clintel Declaration is a small step toward eliminating the “science” justification from the ongoing destructive and immoral economic transition.

What question did we forget?
The following is a short summary of what we know about the real science of climate change and CO2. Each of these statements is well supported by data and analysis:

The following is a short summary of what we know about the engineering of the world’s energy system. Again, each statement is well supported by facts and analysis: