A Tribute to Fred Singer 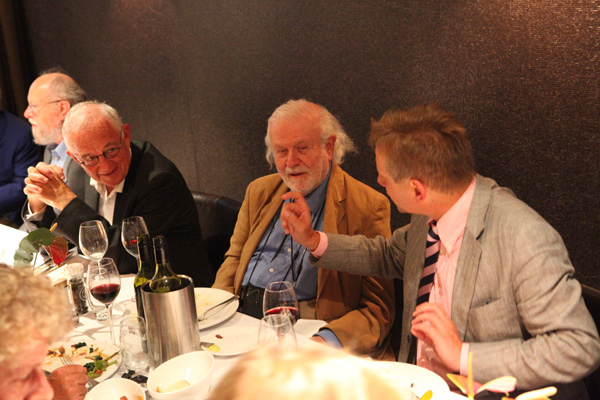 This photo was taken in 2011 when Singer gave a talk at KNMI in The Netherlands. In the evening we had dinner with a group of sceptic and mainstream scientists

Fred Singer has fought the good fight, he has run the race, he has kept the faith. Now history will judge him. As the years pass, I am confident that Fred’s positive contributions to his generation will be more and more widely appreciated.

Fred did not have an easy journey through life. What he achieved was due to his own intelligence and indomitable spirit. He had no powerful family or patrons. This never bothered him, perhaps because he made so many friends who admired his pluck.

Although he was subject to more than his share of unjust abuse, Fred did not seem to hold grudges. Few of us can forgive and forget the way Fred did.

It seems appropriate to close this brief farewell to Fred with tribute I wrote to honor his 90th birthday.

“It is an honor for me to write a few words on the occasion of Fred Singer’s 90th birthday. Fred is a fine scientist, a person of great courage, unflagging optimism, and enormous energy.

As an adolescent, Fred Singer escaped Nazi rule of his native Austria. He first found refuge in England. He reached his adopted homeland, the United States of America in the 1940’s, in time to attend graduate school at Princeton University, where he earned a PhD in physics for work on cosmic rays. His thesis advisor, John Wheeler, was a student of Niels Bohr. John Wheeler made important contributions to the development of the hydrogen bomb.

Fred’s PhD dissertation was on cosmic rays that bombard our earth from outer space. And Fred has maintained a lifelong interest in the atmosphere, space and space exploration. He helped to design the first earth observation satellites, including instruments to measure atmospheric ozone. In the past few years, he has focused on how the rates of temperature change depend on altitude in the atmosphere, a particularly awkward area for climate models, which predict much more warming in the mid troposphere than is actually observed. He has also published interesting papers on the origin of the moons of Earth and Mars.On the side, Fred has accumulated expert knowledge of an amazing number of topics – “of shoes and ships and sealing wax, of cabbages and kings.” On one visit to Princeton, Fred introduced me to his old friend, Ephraim Isaac, a distinguished scholar of ancient Semitic languages. Ephraim was born in Ethiopia and received much of his early education there. Fred more than held his own in a debate with Ephraim about three-consonant root words of ancient Akkadian, a Semitic language that has been extinct for several millennia.

Scientists and academics like to boast about their cool objectivity, but in fact, independent thought can come at a high price that few are prepared to pay. According to Plato, Socrates was the “gadfly” of ancient Athens. Fred has been an effective gadfly of the scientific establishment of our generation. A few years after getting to know Fred, during my time as Director of the Office of Energy Research at the US Department of Energy, I invited Fred to give a colloquium on global warming at Princeton University. When the announcement of Fred’s colloquium was published, a Nobel-prize-winning physicist colleague walked into my office and upbraided me with obscene words that I was surprised he knew. This rather diminished my respect for my colleague, who knew almost nothing about the physics of climate, and increased my respect for Fred.

Many academics are frustrated “philosopher kings,” embittered because society at large does not give them the reverence they think they deserve. Perhaps as a response to this, many lookinward, associating only with like-minded academics and treating the rest of society with contempt and even hatred.Group-think is prescribed on various subjects. Academic groupies deplore Fox News, praise the New York Times, and are certain that the continued use of fossil fuels will destroy the planet. It is a rare academic who knows even a fraction of what Fred knows about climate science, but the groupies have a frenzied certainty that Fred’s views on climate are wrong. All of their friends agree with them. It reminds me of Hans Christian Andersen’s story about the Emperor’s new clothes: “Not only were their colors and patterns uncommonly fine, but clothes made of this cloth had a wonderful way of becoming invisible to anyone who was unfit for his office, or who was unusually stupid.” Like many of the rest of us, Fred has had difficulty seeing the new climate clothes that are sacred dogma for the groupies. He has been viciously attacked for pointing out the problems with climate dogma. To his credit he successfully sued one particularly libelous henchman of Al Gore for character defamation. To quote a proverb in Fred’s mother tongue, “Mehr Feinde, mehr Ehre,” more enemies, more honor.

For many years Fred has informed fellow citizens about developments in climate science with a regular newsletter, “The Week That Was.” I still look forward to this newsletter, that include references to new scientific findings related to climate, policy issues related to climate change, and comments by Fred himself and his fellow editor, Ken Haapala. There are many good newsletters and blogs on climate, but “The Week That Was,” is exceptional in its stress on sound science. What else would you expect from Fred, an academic grandson of Niels Bohr?

Thoughts are free, who can figure them out?
They fly past, like the shadows of the night.
No man can know them, no hunter can shoot them
With gunpowder and lead; thoughts are free.”