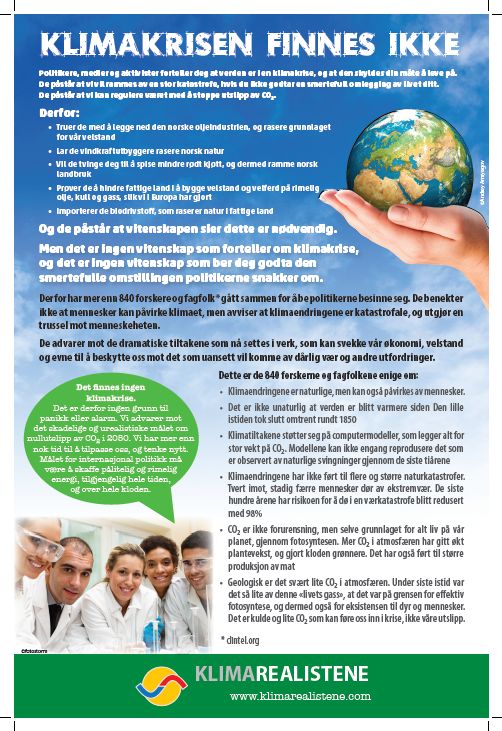 In these times of Corona, the Climate Realists in Norway have advertised in Norwegian newspapers. We have filled up a full page in two national newspapers. Partly, we have done so in order to tell Norwegian politicians that there is no climate emergency, and therefore not to waste our money on an modelled problem. The campaign is based on the Clintel declaration: There is no Climate Emergency.
The reactions to our ads have been interesting. Most of the newspapers rejected to print it. They oppose our message and do not want to bring it to the public. For those papers having printed it, there were always editorials explaining why they had done so: This is part of the democracy, and freedom of speech. The editor always ended up giving the declaration: The climate emergency is real – it´s documented by the IPCC.
Both Newspapers having printed the advertisement, and the Climate Realists, have been heavily attacked by the environmental organizations, and politicians. They obviously were shocked to see our message, never before being presented to the public. In the Norwegian debate, we clearly experience that the public, the media, and the politicians, juxtapose climate change and climate emergency. To them, that’s the same. When arguing there is no climate emergency, they accuse us of not believing in climate change.
We are told to be totally wrong, and all our assertions can be rejected. This is repeated from the NGOs, the media, and the politicians. The NGOs threaten to sue us. We hope they will. It will be a good opportunity to bring up the good science.
By Morten Jødal|2020-04-03T17:58:04+02:003 April 2020|Norway|Comments Off on Norwegian Climate Realists advertise in two national newspapers