On October 18, 2021, BBC (producer Owen Sheers) aired a “conspiracy thriller” entitled The Trick – though a more complete title would have been The Trick… to Hide the Trick to Hide the Decline. In a forthcoming post, I’ll do a longer analysis of the trick in which, to borrow a phrase from Climate Audit past, we will watch the pea as Sheers and colleagues use a trick to hide the “trick to hide the decline”. In today’s post, I’m going to parse a short scene in which BBC created a fake Climate Audit screengrab (shown below) in order to introduce me and Climate Audit. In the scene, a police forensic specialist is “explaining” his discoveries to supervising detective inspector Julian Gregory, telling the inspector that this is where the first link to the emails was posted.

But the screengrab is not from Climate Audit, but a fake imitation. While the comments in the screengrab do relate to comments on a Climate Audit article, they are from a different article, with the “A miracle just happened” comment being spliced from the original thread into this thread from a different article. But the BBC didn’t stop the fabrication there: they replaced contents of several comments from the original thread with fabrications that appear intended to ridicule the commenters. Then finally, they altered the “A miracle just happened” comment itself by adding link in the comment, but to a website that did not exist at the time, while concealing the actual website at which the email zipfile was originally posted (realclimate.org). I’ll show this in detail: it’s quite bizarre.

Here’s a contemporary screengrab of the Climate Audit page on which the “A miracle has occurred” comment was posted. The BBC went to some trouble to emulate the typeface and fonts of Climate Audit, while slightly changing the banner. The post raised relevant and important questions about strip bark trees in chronologies – use of which was an important and well-known trick employed by Mann and others in temperature reconstructions. As we shall also see below, the title of the article ties to the comments that were contiguous to the actual link to the emails – this is possibly why BBC used a fabricated comment page rather than the real comments – a trick, so to speak. 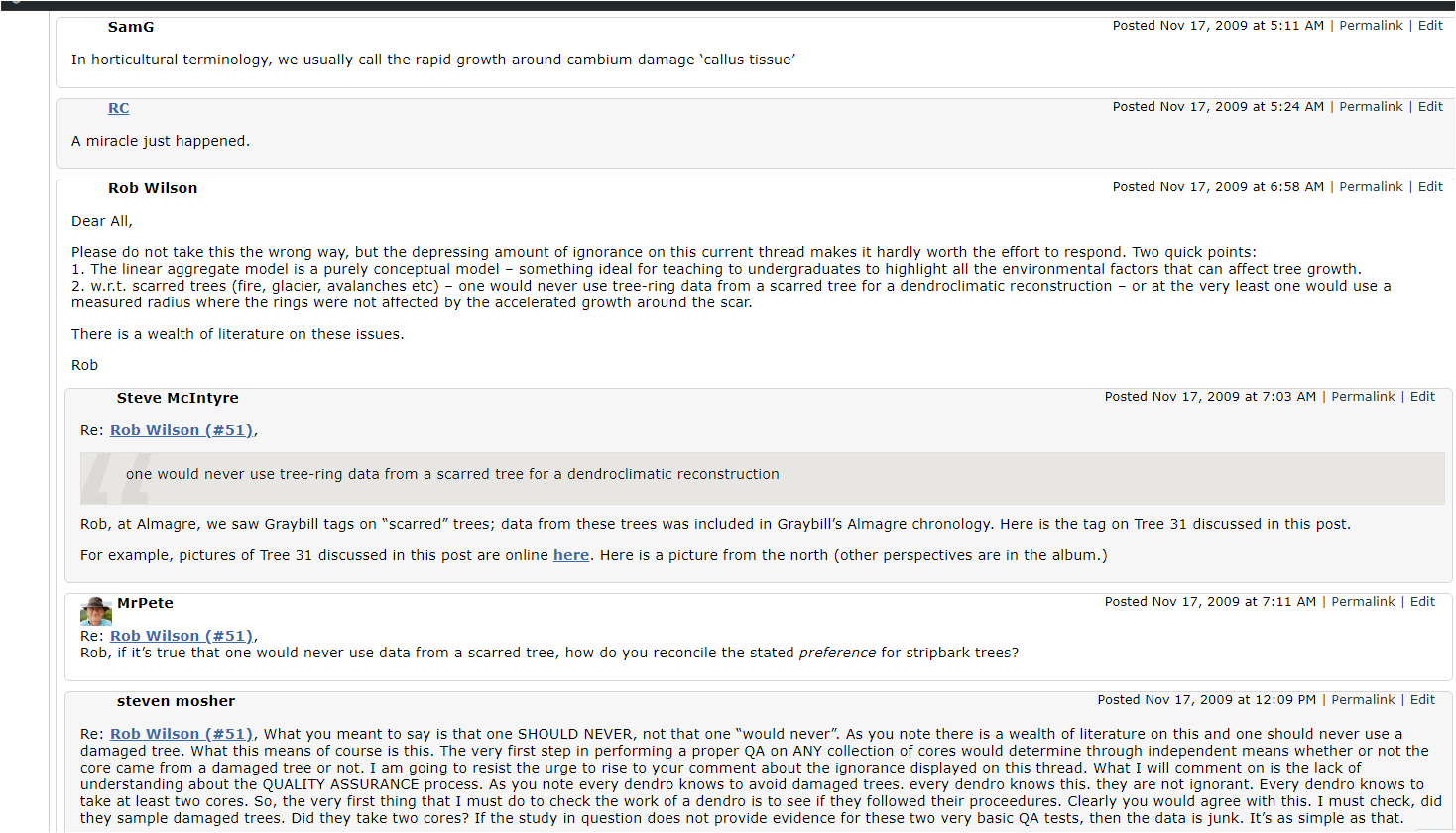 Now look at the corresponding entry in the fake BBC screengrab (in which names have been redacted, adding to the impression that this was an authentic screengrab): “A miracle has happened http://eastangliaemails.com&#8221; posted “Dec 22, 2009 at 3:23 PM”. By inserting a false link in the comment, the BBC forgery did two things: it diverted attention away from realclimate.org; and it also made the hyperlink at Climate Audit appear to be a main event in the dissemination of the emails (rather than an interesting curiosity not known about until nearly a week later.) 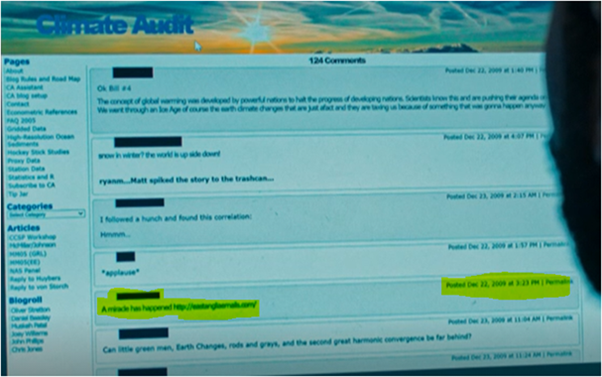 But, in a way, the other fabrication in this comment page are even more interesting.

In June 2018, Climate Audit contributor Roman Mureika, a retired professor of statistics, published an article at Climate Audit, that snickered at the latest global warming scare, that was then being promulgated in risible articles by CBS News, Associated Press and others, based on a crank article by a Thomas Chalko, that warned that global warming was increasing the “destructive ability of earthquakes”:

the research proves that destructive ability of earthquakes on Earth increases alarmingly fast and that this trend is set to continue, unless the problem of “global warming” is comprehensively and urgently addressed…global seismic activity was increasing faster than any other global warming indicator on Earth and that this increase is extremely alarming

Mureika observed that “A simple perusal of the USGS website would easily expose this paper as a complete pile of rubbish.” (CBS retracted its article soon after Mureika’s post.)

How does this connect to the forged BBC screengrab? The comments contiguous to the “A miracle has happened” comment were based on comments to Mureika’s article, as shown below (h/t @TVOAT). (But with curious additional forgeries.) Discussion follows below screengrab of actual comments. 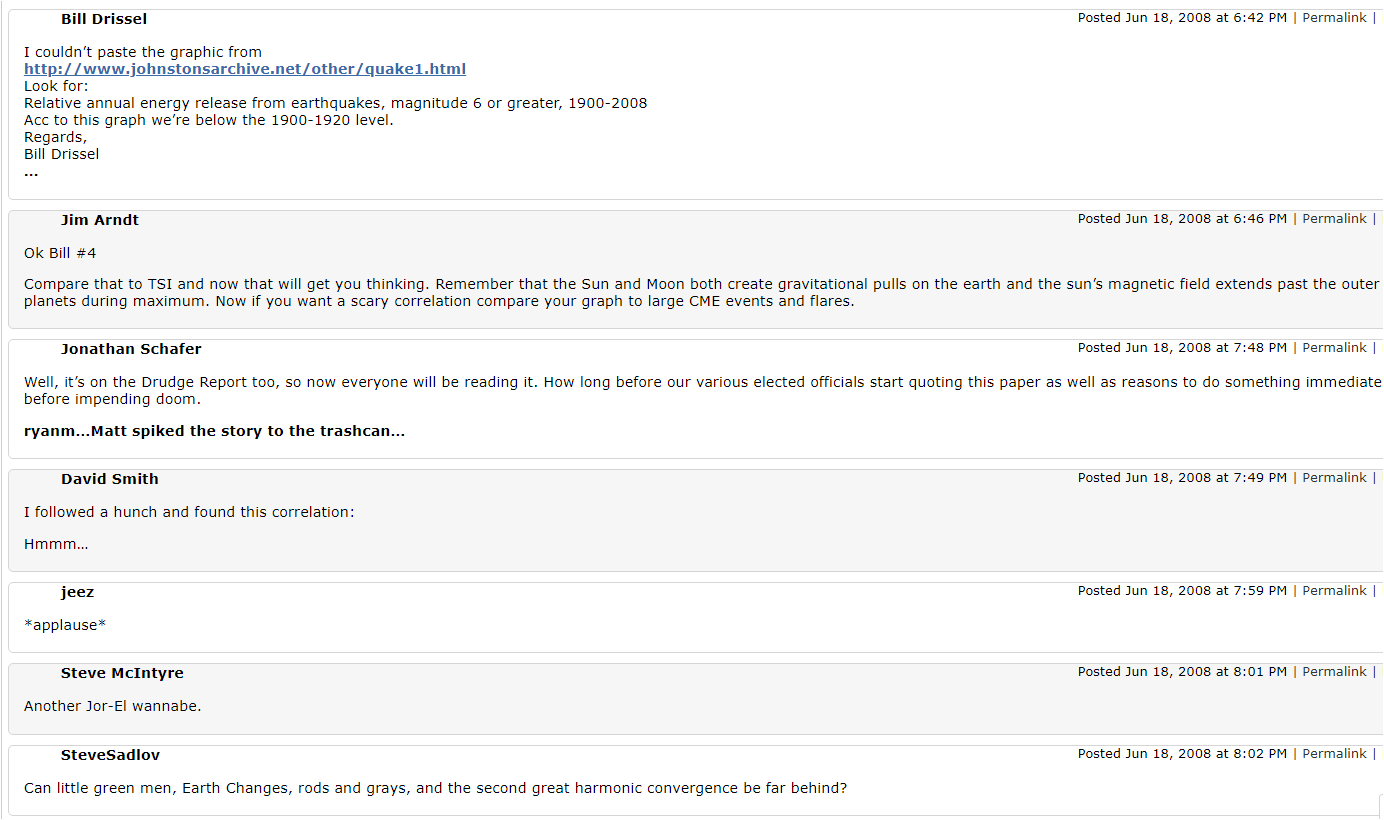 Commenter Bill Drissel linked to a website showing actual data on energy released from earthquakes – data that indicated that, quite separately from any plausible connection between global warming and earthquakes, the annual energy released by earthquakes in recent years was lower than in the two decades at start of 20th centtury. The second comment above, beginning “Ok Bill #4” provided a sort of template for the BBC Trick comment also beginning with “Ok Bill #4”. But whereas the original comment had discussed that “Sun and Moon both create gravitational pulls on the earth and the sun’s magnetic field extends past the outer planets during maximum”, here is a transcription of the corresponding comment in the BBC forgery: trite conspiracy theory that “concept of global warming was developed by powerful nations to halt the progress of developing nations” – a forgery that is the sort of thing that zealots attribute as a commonplace “climate skeptic” viewpoint. But why do a forgery at all?

The next BBC forgery is similar. Whereas commenter Jonathan Schafer had originally observed that the absurd story popularized by CBS News was now “on the Drudge Report”, wondering how loing it would be before “elected officials start quoting this paper”, to which Climate Audit contributor Ryan Maue (ryanm) added an inline comment that “Matt [Drudge] spiked the story to the trashcan”. The BBC kept Ryan’s inline comment, but altered the original comment to a forgery saying “snow in winter? The world is upside down” – a forgery that would have the effect of ridiculing Climate Audit commenters.

The subsequent comments in the Climate Audit thread also snickered at the absurd CBS News article. The BBC deleted my comment “Another Jor-El wannabe” and, in its stead, inserted the “A miracle has happened” comment from 18 months later.

The term “Jor-El wannabe” was an allusion to a Climate Audit article the previous year entitled Hansen and the Destruction of Creation, commenting on a jeremiad by climate scientist James Hansen, who had been embarrassed by my discovery that NASA GISS had made a stupid programming error in their recent data in which 1934 had been demoted as the warmest year in US instrumental records and that, when the error was corrected, it was once again the warmest year. Rather than conceding the error and acknowledging the criticism, Hansen went into a tirade about the “destruction of Creation” – a tirade so bizarre that I satirically proposed that Hansen had a “Jor El complex” (referring to destruction of Krypton in Superman comics):

In a contemporary hagiography, Hansen purported to justify NASA GISS’s failure to acknowledge my contribution to the correction of their error on grounds that “I’m not going to use McIntyre’s name”: see contemporary post here. 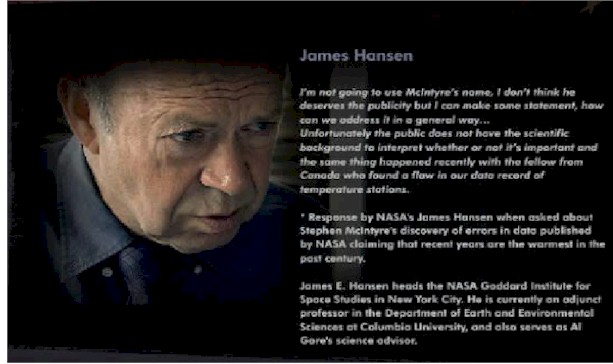 There are many other tricks and deceptions by BCC and Sheers in The Trick. Indeed, the entire premise of the narrative turns out to be a “trick”, as I will discuss in a forthcoming post. A program that, as Jon Stewart might say, the purpose of which was to trick you … into not knowing about the trick to hide the decline.