Blood on the blades: are thousands of dead bald eagles too high a price to pay for “clean” energy

Last week the U.S. Department of Justice (DOJ) announced that they had sentenced ESI Energy for a “blatant disregard” of federal wildlife laws of the Migratory Bird Treaty Act (MBTA). In their guilty plea to multiple violations, ESI admitted to the killing of at least 150 bald and golden eagles across 50 of its wind-energy facilities since 2012. Nearly all died of blunt force trauma attributable to being struck by a wind-turbine blade.

The so-called “clean” energy company — a subsidiary of NextEra Energy — was fined $8 million, or about $53,300 per carcass. It turns out that the fine and sentencing was NOT because they killed many dozens of our national symbol, but rather that they killed them without first acquiring the necessary permits that would have legalized the slaughter.

Why would ESI simply fail to do the paperwork that is regularly a part of the process for permitting wind facilities? The answer: money, and a lot of it. 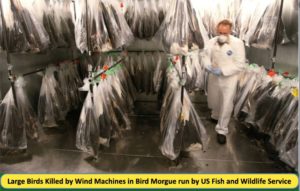 The most egregious project was located in Converse County, Wyoming, known as the Cedar Springs I, II and III wind-power facilities. In the spring of 2019, the U.S. Fish and Wildlife Service (FWS) informed the company that Cedar Springs was expected to kill 44 golden eagles and 23 bald eagles over the first five years of operations and recommended that the “proposed wind facilities not be built.” Later that same year the FWS repeated its objection and recommended that the facility, if built, should “implement seasonal curtailment during daylight hours.” Construction continued, and no curtailment was employed.

According to DOJ, the company expedited construction “intended to meet, among other things, power purchase agreement commitments and qualifying deadlines for particular tax credit rates for renewable energy.” The DOJ press release further stated: “ESI and its affiliates received hundreds of millions of dollars in federal tax credits for generating electricity from wind power at facilities that it operated, knowing that multiple eagles would be killed and wounded without legal authorization.”

This $8 million settlement appears to be the cost of doing business for ESI in order for them to cash in on the Big Wind green energy scam.

These eagles are much like inattentive drivers texting on their cell phones with their heads down and not looking up, unaware that there is a truck stopped ahead. Like that distracted driver, the birds are looking for prey on the ground and unaware of the looming danger ahead until it is too late.

The legalized slaughter of eagles and other large birds of prey was legitimized under the Obama administration and continues today. At the time, it was estimated that nearly 600,000 birds of all types were killed by the much smaller wind footprint at that time, including 83,000 hunting birds such as hawks, falcons and eagles.

Unknown to most citizens is the fact that the FWS has established a “take limit” for wind energy companies to kill bald eagles. This would be similar to a bag limit for a hunter. However, hunters dare not as they are not of the protected class and would be subject to a maximum fine of $250,000 or two years of imprisonment for a felony conviction. FWS regularly imposes fines on oil companies and electric transmission firms for inadvertent deaths of bald eagles, all the while giving its seal of approval to green-induced eagle carnage of a grand scale from turbines.

The FWS bald eagle take limits were revised February 2022 to allow a more than four-fold increase in the legalized slaughter.

Those promoting the flawed idea that a complete transition from fossil fuels to an economy driven solely by wind and solar need to ask themselves, “At what cost?”

Gregory Wrightstone is a geologist, Executive Director of the CO2 Coalition in Arlington, Virginia and an expert reviewer of the Intergovernmental Panel on Climate Change (AR6). He is the best-selling author of Inconvenient Facts: The Science that Al Gore doesn’t want you to know.

This commentary was first published at Human Events April 11, 2022

The image below was created by Thiago Hellinger for the CO2 Coalition and may be reproduced with our permission in its entirety with attribution. 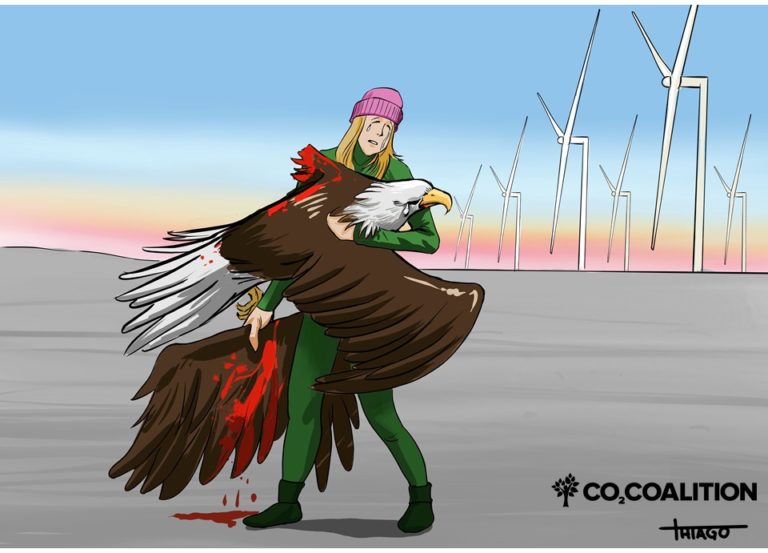