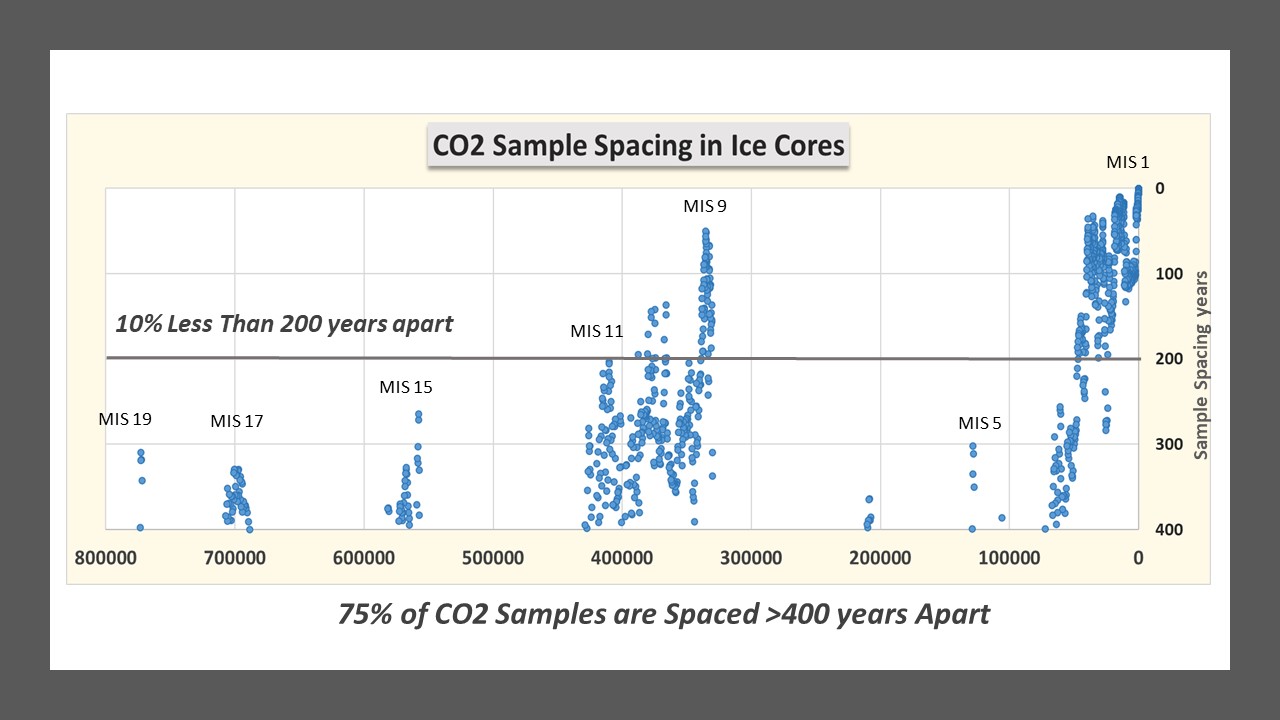 Introduction
This post examines sample spacing for CO2 measurements in Antarctic ice cores during the past 800,000 years to better understand if gaps in sampling are too large to capture centennial fluctuations. The IPCC states:

“Although ice core records present low-pass filtered time series due to gas diffusion and gradual bubble close-off in the snow layer over the ice sheet (Fourteau et al., 2020), the rate of increase since 1850 CE (about 125 ppm increase over about 170 years) is far greater than implied for any 170-year period by ice core records that cover the last 800 ka (very high confidence).”

Figure 1a shows the IPCC’s figure of CO2 fluctuations over the past 800,000 years. This appears as a continuous and evenly sampled line, but it is not. Ice cores are sampled for CO2 at discrete locations along the core. Figure 1b plots the individual CO2 data points showing obvious gaps of up to hundreds of years between samples. 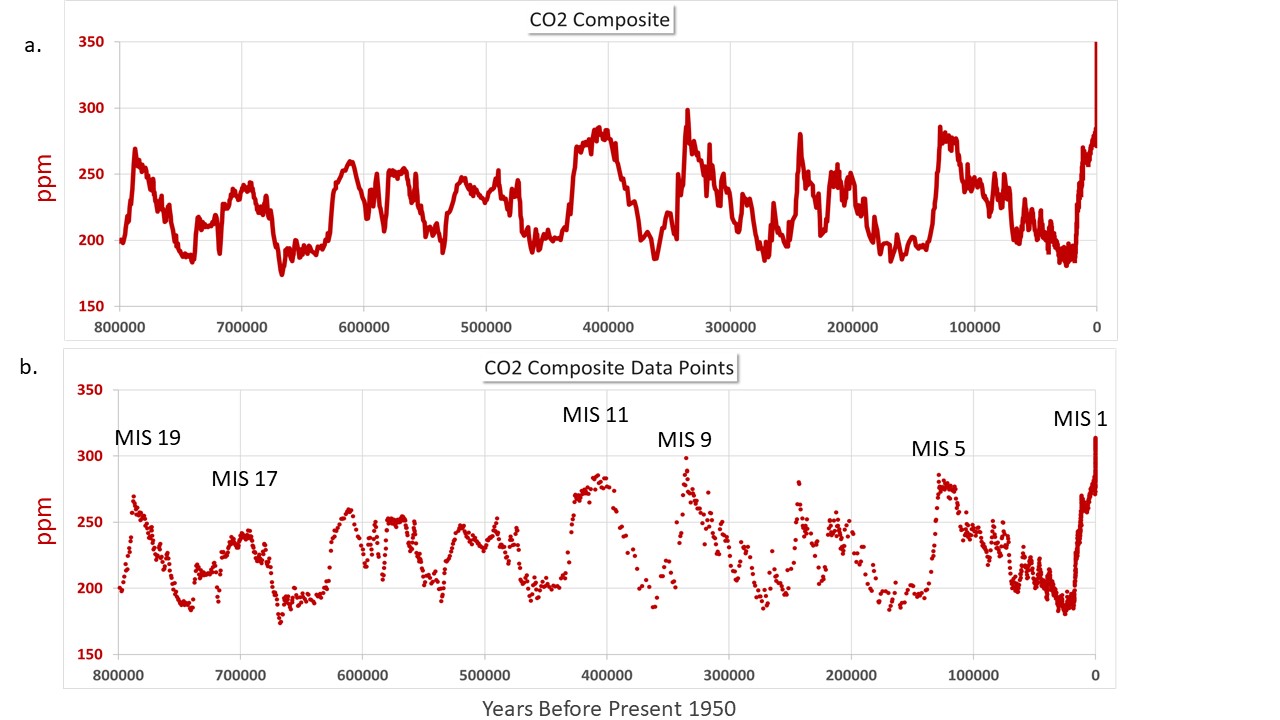 Figure 1. a) IPCC’s figure 2.4a showing CO2 ice core measurements during the past 800,000 years from Chapter 2 in AR6 Climate Change 2021. Data from Bereiter, 2015. b) CO2 data points that comprise the CO2 thick line shown in the IPCC’s figure 2.4a. Marine Isotope Stage (MIS) shown for key interglacial periods.

CO2 Sample Gaps Exceed Instrumental Record
Samples for CO2 measurements are taken along ice cores at distances ranging from 50 cm apart to over 10 meters shown in Figure 2. There does not seem to be a standard or routine distance for sample selection and sampling frequency is probably determined more by study funding and/or research interests. Sample spacing on cores over the Holocene MIS 1 is good and ranges from 20 cm to 3 meters.

There are two cores long enough to cover older sections including MIS 5 and beyond, Vostok and Dome C. Vostok shown in light orange is a widely used public CO2 dataset but has the largest space between samples, ranging from 2 meters to greater than 18 meters. Dome C sample spacing over the older section from MIS 9 through MIS 19 is very good and less than 1 meter apart. 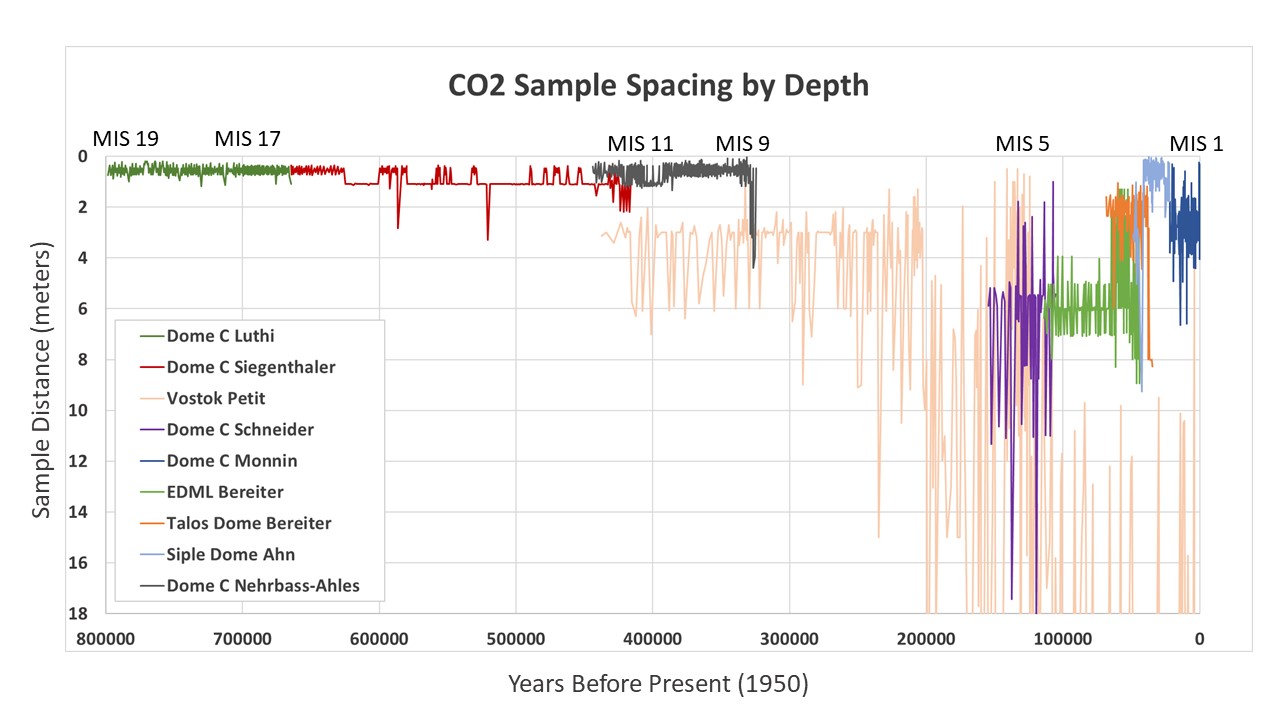 Figure 2. CO2 sample spacing in depth (meters) collected from Antarctic ice cores over the past 800,000 years BP. Data from Bereiter, 2015 and additional higher resolution data from a recent study by Nehrbass-Ahles, 2020.

Let’s examine samples converted from depth to time which is critical to identifying centennial CO2 fluctuations and trends. Figure 3 shows sample spacing in years over the past 800,000 years. The 200-year interval is highlighted because it is slightly longer than the modern CO2 rise over the last 170-year period reported by the IPCC. There are minimal periods when ice core CO2 sample spacing is less than 200 years; consistently from 0 to 60,000 years BP, sporadically (12 samples) between 125,000 to 140,000 years BP and sporadically between 330,000- and 400,000-years BP. Again, note that Vostok CO2 records have the worst temporal sample resolution. 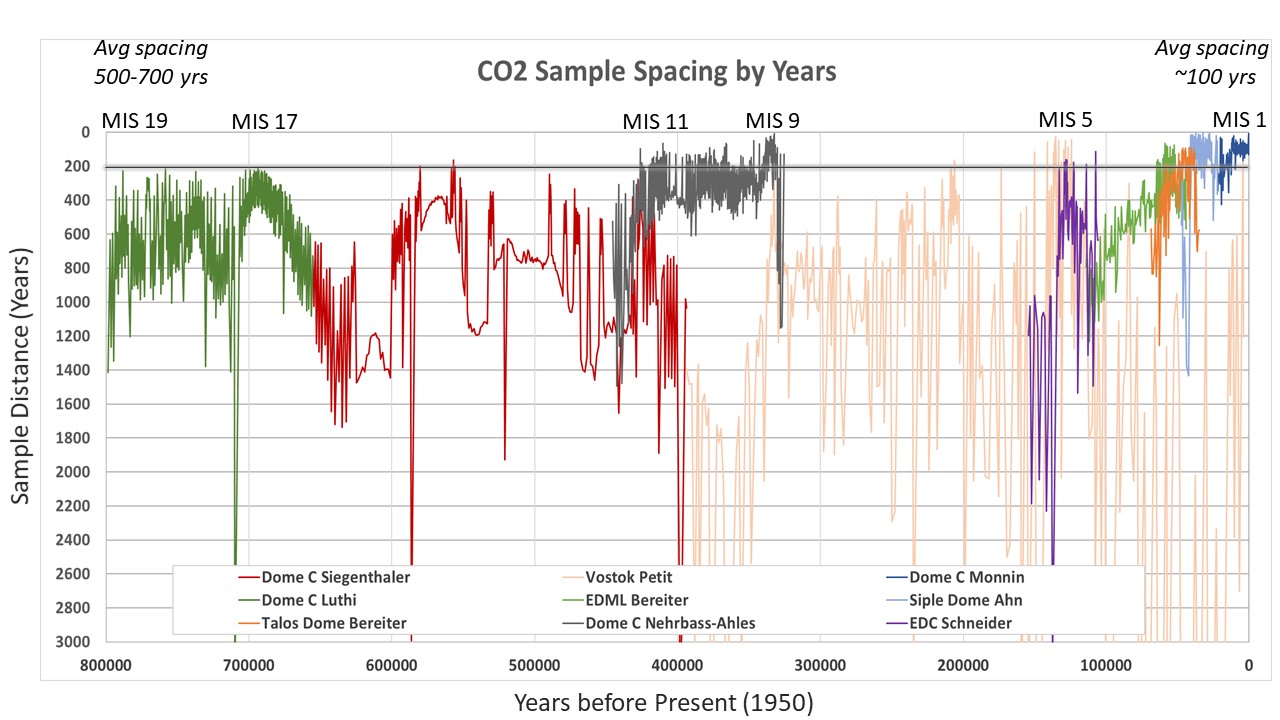 Dome C samples in the Monnin study over MIS 1 averages 72-year sample increments for CO2 and is reasonably good. Joos, 2008, confirms sample spacing for CO2 is 100 years or less during the Holocene MIS 1 and around 200 years during the last deglaciation transition. He also states that CO2 sampling intervals are even shorter, 30 to 60 years, for Law Dome and Firn records over the past 2000 years AD.

The most recent study by Nehrbass-Ahles during MIS 9 to MIS 11 averages 300-year sample spacing or temporal resolution. Sample spacing decreases to 100-year increments during MIS 9. The MIS 17 through MIS 19 timeframe has a mean sample spacing resolution of 570 years and between MIS 11 and MIS 17 is 731 years (Luthi, 2008, Siegenthaler, 2005). The large gap in time between samples provides little chance of observing centennial CO2 fluctuations with datasets during MIS 5 and older.

Nerbass-Ahless concludes that centennial jumps are a pervasive feature of the natural carbon cycle that are undetected in CO2 ice core records of insufficient temporal resolution. They state that sub-millennial-scale CO2 variability is only available for about the past 60,000 years BP.

Sample Gaps Compound CO2 Firn Smoothing in Ice Cores
Ice core data resolution is suppressed by both temporal sampling as well as firn gas diffusion. Sampling resolution is discussed in detail above, but it is worth discussing firn gas smoothing as well.

Many authors have documented gas smoothing in the firn layer due to vertical gas diffusion and gradual bubble close-off during the transition from firn to ice (Trudinger, 2002; Joos and Spahni, 2008; Ahn, 2012; Fourteau, 2020; IPCC, 2021). To compensate for cores from sites with varying snow and ice accumulation, a gas age distribution width or smoothing is modeled. For example, high accumulation Law Dome and WAIS cores have an average gas age of 10-15 years and 30 years, respectively. Low accumulation sites such as Dome C and Vostok contain gas that is averaged or smoothed over hundreds of years. According to Monnin 2001, Dome C is smoothed about 200 years in the Holocene and smoothing increases to 550 years during the Last Glacial Maximum (LGM).

Fourteau has this to say:

“For carbon dioxide, firn smoothing appears to significantly diminish the recorded rates of change in abrupt CO2 increases, compared to their atmospheric values. The estimations of CO2 rates of change are further altered by the process of discrete measurement, and measured values can be 3 times lower than the actual atmospheric rate of change.”

Figure 4 summarizes key ice cores that are color coded by firn gas smoothing as well as average CO2 sample spacing over the past 800,000 years. 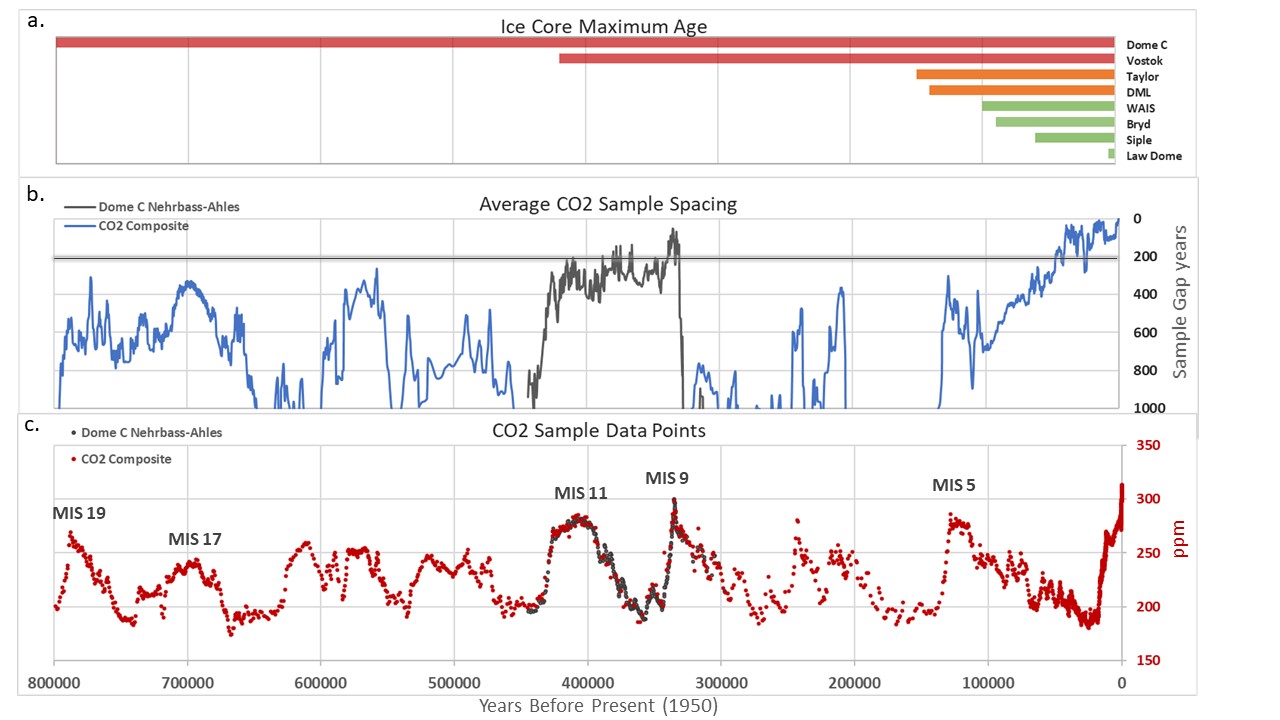 Figure 4a shows multiple high-resolution cores in the Holocene MIS 1 and preceding glacial period. CO2 diffusion rate in the firn is low and sample spacing is good, 100 years or less. Joos, 2009, states that sample frequency in the ice core is generally high enough to capture century scale variations over the past 22,000 years. He also states the 20th century increase in CO2 is more than an order of magnitude faster than any sustained change during the past 22,000 years. And Nerbass-Ahless, 2020, agrees that sub-millennial-scale CO2 variability is only available for about the past 60,000 years. However, sixty thousand years is less than 10% of the 800,000-year ice core record.

In contrast, there are a limited number of ice cores that cover 100,000 to 800,000 years ago, namely Dome C and Vostok. CO2 is smoothed and averaged over hundreds of years due firn diffusion in these low accumulation sites. In the best dataset over MIS 11 to MIS 9, CO2 is smoothed over 200 years and then sampled on a 300-year increment. Both the firn smoothing and the sample spacing are greater that the modern 170-year period reported by the IPCC.

Sampling Methods may Eliminate the Centennial Signal if Interpreted as Noise
A final note on sample methods. Typically, four to six samples for CO2 are taken within a 60 to 100 mm core length for repeatability studies between different laboratories and time lapse (Monnin, 2001). Data points may be rejected due to obvious contamination or fractures. A data point may also be rejected as noise because it has a higher standard deviation than what researchers deem appropriate (Ahn, 2012). The final recorded data point is not usually an actual measurement of CO2. The final data point represents a mean CO2 value derived from the closely spaced samples with a sigma mean typically less than 1.5 ppm. Thus, CO2 measurements can be deemed as ‘outliers’ which are not used and considered noise.

Scientists may also employ additional scrutiny on the final data points such as the statistical method described by Mitchell:

An obvious question is whether scientists are removing CO2 centennial-scale excursions by rejecting samples as statistical outliers compared to the neighboring samples?

Observations
The IPCC statement that:

CO2 records from ice cores are imperfect data. They are muted due to firn diffusion and poor sample frequency. These data should be used only with a “Fit for Purpose” approach. Basically, Antarctic ice cores are useful for evaluating CO2 millennium trends. Their poor resolution due to firn smoothing, depth of burial smoothing and often sparse sample spacing will never resolve centennial CO2 fluctuations with certainty despite the IPCCs claim it can be done with “very high confidence.”

Paleoclimate CO2 global fluctuations should encompass multiple data sets and not just Antarctic ice cores. For centennial CO2 fluctuations, datasets that capture higher variability need to be incorporated, such as higher resolution Greenland ice cores as well as plant stomata data. To be clear, all datasets with CO2 proxy measurements have their problems and limitations. Using higher resolution data, CO2 centennial fluctuations similar in magnitude and rate of increase to the modern do exist and have been identified such as described in my previous post here.

Acknowledgements: Special thanks to Donald Ince and Andy May for reviewing and editing this article.