U.S. progressives are convinced that fossil fuels must be replaced with renewables by 2050. The IEA even has a plan to do it. How will this work? Unlike progressives we value observational data over ideology, so let’s examine the data. According to ExxonMobil’s 2021 Outlook for Energy the world consumed 89.4 BBOE (billions of barrels of oil equivalent) of primary energy in 2020, during the pandemic. OurWorldinData.Org provides a similar number of 93.5 for pre-pandemic 2019, as shown in Figure 1. 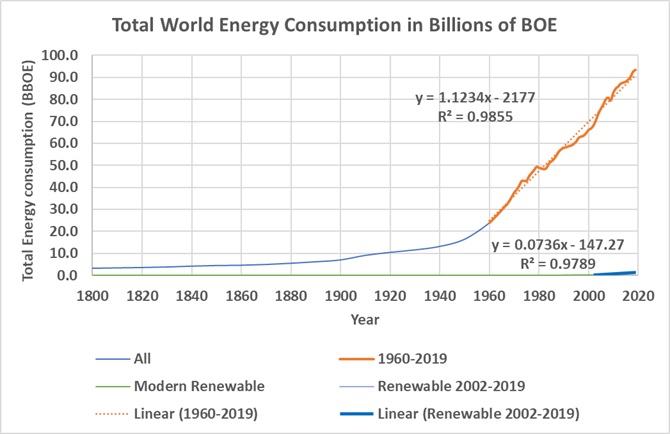 When discussing energy consumed globally, there are a bewildering number of units used in the literature, which is confusing. In this post we have consistently used BBOE, or billions of barrels of oil-equivalent energy. Oil is still the largest source of primary energy in the world, supplying 31-34% of our energy, further barrels of oil are familiar to the lay person.

OurWorldinData uses TWh (terawatt-hours) to report energy consumption, which must be multiplied by 5.9×10-4 to convert it to BBOE. ExxonMobil uses quadrillion BTUs, and the conversion factor is 0.1651787. BP prefers exajoules, which differ from ExxonMobil’s quadrillion BTUs by a factor of 0.94782. You can see my point; with all the conversions and weird units, it is hard to think about what the numbers mean for our lives and welfare. Instead, the reader’s eyes glaze over, and the very real impact of the numbers is lost.

OurWorldinData tells us that the global primary energy consumed in 2019 is provided by oil (33.8%), natural gas (24.7%), coal (27.6%), traditional biomass (7%), hydroelectric (2.7%), nuclear (1.8%), wind (0.9%), modern biofuels (0.7%), and 0.8% solar plus other renewables. Obviously, electricity is consumed, but the electricity must be produced using one or more of the primary fuels. The percentage of our primary energy produced from various sources varies a little from year to year and by source, but the values I listed are very typical. They indicate that 86% of our energy comes from fossil fuels and only 2% is from wind, solar, other, and modern biofuels. The amount from solar is insignificant and combined with “other.”

Figure 1 shows that the increase in global energy consumption since 1960 is quite linear (R2 = 0.99) and increasing at a rate of 1.1 billion BOE/year. Modern renewables, contrary to popular belief, are not even increasing enough to keep up with the growth in consumption. As a result, fossil fuel use is increasing, not decreasing globally. Total growth in renewables is so small, it only covers 7% of the increase in energy consumption. You can only produce and install so many solar panels and windmills, and they don’t last that long in the open.

Developed western economies, have attempted to reduce their use of coal to reduce CO2 emissions. But except for the impact of the pandemic, it has not affected global coal use, mainly because of China and India, as seen in Figure 2. All their efforts have done is export manufacturing to China, India, and other countries, making the developed world more dependent upon imports. Even the pandemic made very little difference in coal consumption.

Progressives often ignore this fact and emphasize energy consumption in the developed world, ignoring exported fossil fuel use to the developing world. The key point is that the energy market is global, prices are set globally, not by evil fossil fuel companies. Fossil fuel energy increases prosperity globally and facilitates global commerce. Eliminating it will cut the developed world off from numerous critical manufactured goods. Figure 2. Coal use, China, India, and the world in terawatt-hours. Source OurWorldinData.org.

“Traditional biofuels” are the burning of wood and dung in houses or businesses for heat, light, or cooking. This is not desirable because it produces toxic air pollution. The indoor air pollution caused by traditional biofuels, causes 4% of global deaths. A major study, published in The Lancet, estimates that more than two million deaths can be attributed to indoor air pollution in 2019 (Christopher Murray, 2020). The World Health Organization (WHO) estimates that four million deaths, every year, are caused by indoor air pollution. Domestic wood burning is not just a problem in the developing world, the European Environment Agency, WHO, and the Netherlands Organization for Applied Scientific Research suggest that over 40% of toxic emissions are from residential biomass burning. The UK Department for Environment, Food, and Rural affairs (DEFRA) estimates that 38% of UK air pollution is due to wood-burning stove emissions. In contrast, energy production and distribution of electricity, not produced from biofuels, supplies 5%. For more on this topic, see here and here.

Generally, additional atmospheric CO2 and global warming have been beneficial so far, so the debate is not about the impact of greenhouse gases and global warming today or in the past, it is about what might happen in the future. Figure 3 projects the slopes in Figure 1 to 2050. The projections shown in Figure 1 show that renewables are very unlikely to satisfy future energy needs. Clearly another energy source is needed, and that is likely to be more fossil fuel use. Do the additional fossil fuels exist? Table 1 shows that the EIA estimates the world holds 3,357 BBOE in technically recoverable oil and an additional 3,813.7 BBOE of natural gas. Both values are conventional plus unconventional resource estimates. The USGS global undiscovered technically recoverable conventional oil and gas resources are also given, as well as a peer-reviewed unconventional resource estimate by Hongjun Wang and colleagues. The estimates vary but lie in the same ballpark. Table 1. Various estimates of technically recoverable resources of oil and gas in BBOE.

The globe has been producing fossil fuels for a long time and yet technically recoverable resources continue to grow, we can expect resource estimates to increase in the future (also see here). The main reason resource estimates increase is new technology. The projections of energy consumption shown in Figure 3 sum to 3,264.3 BBOE of energy between 2022 and 2050, the total projected renewable energy production totals to 79.3, which is only 2.4% of what is required. The remainder must be from fossil fuels. Nuclear power plants take too long to permit and build, and little hydroelectric generation will be added between now and 2050.

Between natural gas, oil, and coal we have technically recoverable resources of 9,785 BBOE, or three times as much fossil fuel energy as we will need before 2050. More importantly, we will have a lot left over.

Discussion and Conclusions
At $119 per barrel of oil, $66 per ton of coal, and $7.28 per MMBTU (as of 6/15/2022) there are no economic constraints preventing the development of our abundant natural energy resources. However, the political, regulatory, and judicial (as in environmental lawsuits) hurdles are currently prohibitive. Global prosperity and energy availability are very strongly correlated, if fossil fuels are curtailed, more people will become impoverished, global health will decline, and it is clear that growth in renewables will not make up the difference.

World governments are clearly on a dangerous and unsustainable path. Fossil fuels are essential to our well-being and survival. People know this and want to buy them; thus, we observe high prices in a time of abundant natural resources. It is only the governments that stand in the way – our elected officials and the unelected bureaucrats. We need to radically change our governments, and quickly. The impact of greenhouse gases is small, and may even be beneficial, this is not true of our current governments.