Fact check : What the floods really have to do with “climate”

In medieval times, the priest would have declared that it would have been a punishment from God for the wicked behavior of sinners. Today’s explanation is unfortunately not far from that. 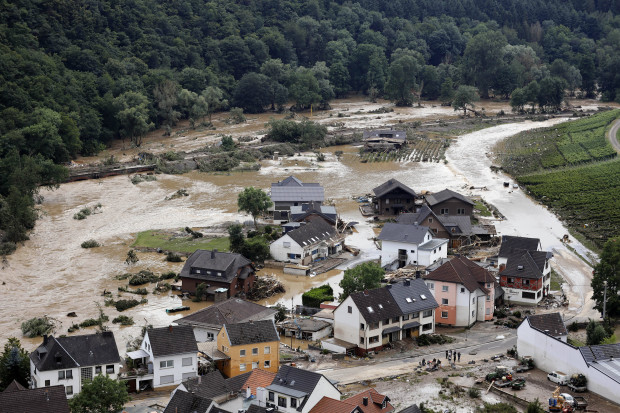 In mid-July 2021, prolonged heavy rain caused severe flooding in western Germany. There were many dead and missing, houses collapsed, people had to be rescued from the roofs by helicopter. Some of the electricity and water supplies failed. A catastrophe. My sympathy goes out to all those affected. The support of the victims should now be in the foreground: A roof over their heads, food, medical care, repairing the damage and filling out insurance forms. It is all the more disconcerting when protagonists now exploit the tragedy for their own purposes.

Naturally, the media are interested in the question of what or who is responsible for the heavy rain. In medieval times, the priest would have declared it was a punishment God, for the sacrilegious behaviour of sinners. Today’s explanation is unfortunately not far from that. As after every extreme weather event, the editorial offices always call the same experts. They call Mojib Latif from Geomar in Kiel and interview Stefan Rahmstorf from the Potsdam Institute for Climate Impact Research, perhaps two three more. But that was it. A German climate explanation oligarchy. What is overlooked is that Latif is president of the German Society Club of Rome and Rahmstorf works closely with climate activists cooperation. Not a good basis for neutral assessments of politically highly relevant climate change issues. This is how Mojib Latif explained to the WDR on 12.7.2021:

“We have also observed in recent years that it is becoming increasingly common for these torrential rainfall with flooding.”

WDR then claims that the extreme weather conditions persisted for longer. Could this also be explained by climate change?  Latif:

“That is to be feared. It’s all about the famous jet stream, this strong wind band in the upper atmosphere, i.e. at an altitude of five or six kilometres. There is, so to speak, a highway for weather systems. And when the motorway slows down they also move more slowly and can last longer. Extreme weather situations are also like that, for example with longer periods of heat or drought and on the other hand very long periods of precipitation.”

Stefan Rahmstorf made similar comments on Spiegel Online on 16.7.2021. He too claims an increase in heavy rain in the world:

“In the meantime, the increase in heavy rainfall is well documented in precipitation measurement data. In 2015, a study by the Potsdam Institute for Climate Impact Research (PIK) found a significant worldwide increase in daily records of the precipitation.” 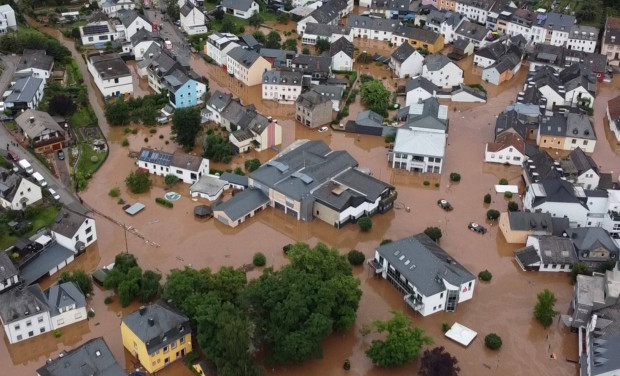 In view of the flood disaster, he called for more speed worldwide in the climate protection. The increasing heavy rainfall and heat events are associated with the climate change, the Welt quotes him. And also the chairperson of the Green parliamentary group in the Bundestag, Katrin Göring-Eckardt, sees the severe storms in the west of Germany an alarm sign for climate change. 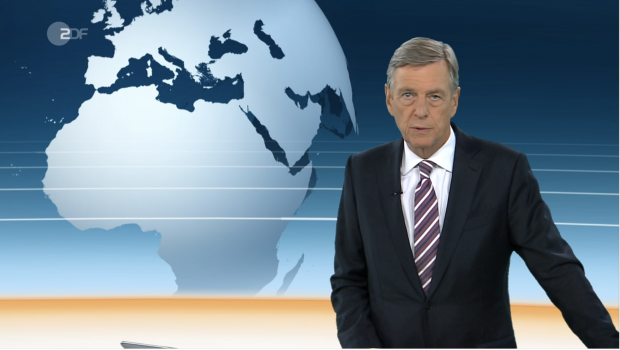 What does science say about the alleged connections? Has the heavy rain already demonstrably left the range of normal natural climate variability? What are the global and Central European trends of the last 150 years? Are blocked weather situations really become more frequent?

As is so often the case with crime thrillers, the first guess about the perpetrator is usually wrong. That seems to be the case here, too. And arguments that seem valid at first sight appear to be turn out to be less robust on closer inspection. The first surprise: there is no robust trend at all worldwide towards more heavy rain and floods.

For example, a team from the National University in Canberra documented that the global precipitation even less extreme in the last 70 years despite global warming have become more balanced, both in terms of time and space. Rather, there is a tendency towards more balanced conditions: Dry areas became wetter, and wet areas became drier. A temperature dependence of the precipitation variability was not observed. 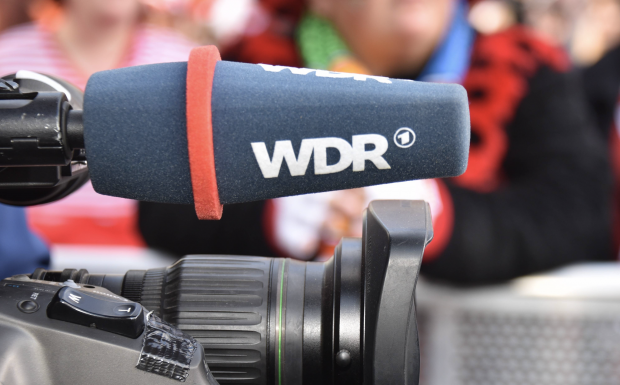 A similar conclusion was also reached in 2021 by a group of researchers led by Louise Slater of the University of Oxford. She has over 10,000 different river gauge records from around the world and analysed for trends over the last 50 years. The scientists found significant changes that differed depending on the climate zone and the time scale under consideration. In the global scale, the severity of floods has decreased overall. The so-called floods of the century in dry and temperate regions have decreased. These are the flood events that have statistically occured every 100 years. In the cold regions of the earth mixed trends emerged during the floods of the century. And what is the situation in Germany? The Federal Environment Agency reported in its Monitoring Report on the German Climate Change Adaptation Strategy 2019 that no flood trends can be identified:

“The time series on [German] flood occurrence is characterised by individual recurring flood events in both the winter and summer half-years characterised. Significant trends cannot be identified. Depending on the weather constellation, there are spatial focal points of flood occurrence. As a rule, however, several river basins are affected. 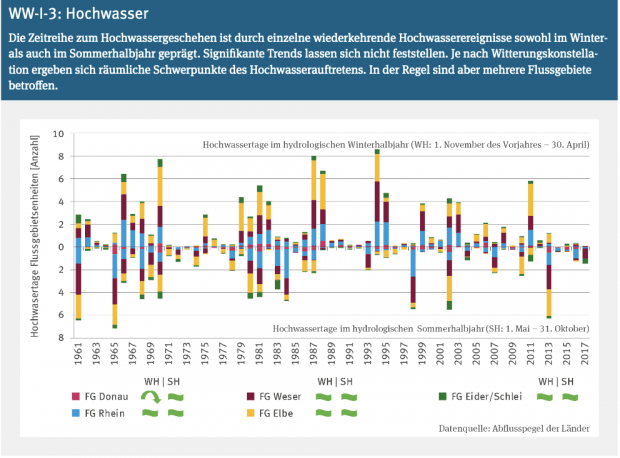 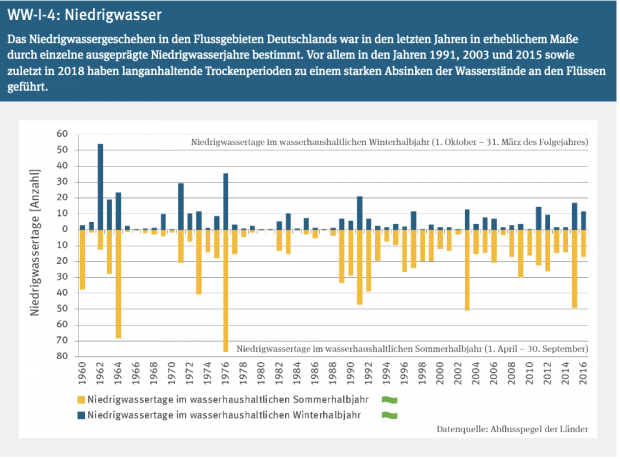 The German Weather Service takes a similar view in its 2020 climate report, which states on pages 38-39:

“For the summer, the available observation data and current methods do not show trends in the number of days with high identify precipitation amounts. A short- and medium-term cyclical pattern dominates here.”

It is a mystery why Mojib Latif and Stefan Rahmstorf suggest that there are here already reliable trends towards increased heavy rainfall. Neither in Germany nor globally can such trends be statistically robustly proven. This is relevant, because during the past 150 years the global temperature has risen by 1.0°C. The “Clausius-Clapeyron equation” professorially celebrated by Stefan Rahmstorf apparently does not play a significant role in the development of heavy rain so far. This is reminiscent of similar physical discussions on the intensity of hurricanes, which according to theoretical considerations should actually become increasingly violent in the course of climate change. In the meantime, however, the theory has been discarded. 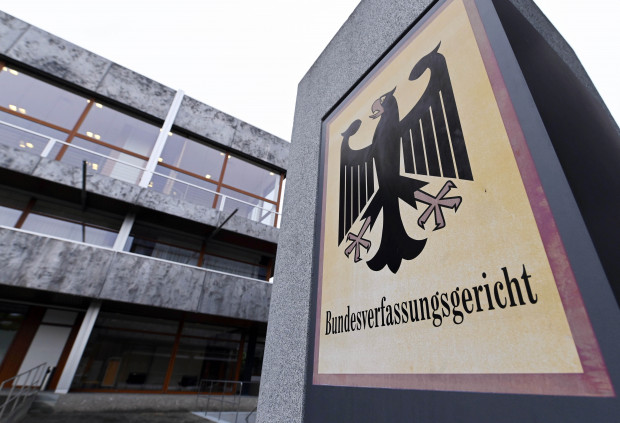 This brings us to part 2 of the fact check. Is the jet stream really meandering today slower than before and therefore nails the weather patterns in one place for longer? What to make of the idea that the strong Arctic warming is affecting the jet stream? You have to know that the jet stream is one of Stefan Rahmstorf’s hobbyhorses. In the winter of 2020/21, he already took the high-altitude strong-wind band out of his bag of tricks to explain cold waves. However, this met with little approval from his colleagues.

Now it’s summer, it’s the turn of the heat waves. Again the jet stream has to be used as justification. And here, too, the majority of professional colleagues disagree. An increase in blocked weather patterns, despite careful evaluation of the data, they were not able to determine so far. In addition, most simulations conclude that blockages tend to become rarer in the course of climate warming, i.e. even less extreme weather would have to be feared. This can be read in publications of Kennedy, Woollings, Hoskins, de Vries and colleagues. Other climate models indicate that the jet stream will probably continue to move in the future like and back again, and changes will vary greatly from region to region fail. In the coming decades, natural variability is more likely to dominate the Jetstream dominate, as it has in the past. 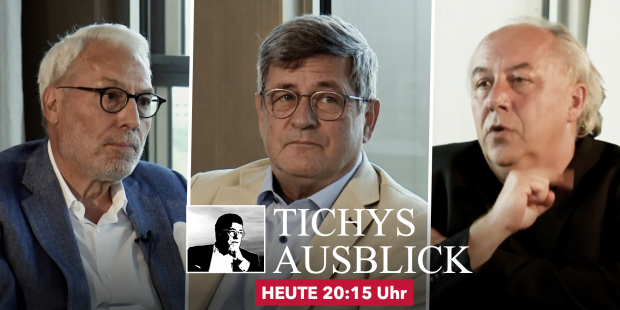 TICHY’S OUTLOOK ON JULY 1, 2021
Tichy’s outlook Talk: “How much climate can we still afford?”

Recently, a group of researchers from ETH Zurich and MeteoSwiss also reviewed the Rahmstorf’s assertion that the jet stream waves are in the wake of man-made climate change could falter. For this purpose, the Swiss investigated a whole series of climate models for Central Europe, with the simulations covering the period until the end of the century. The result was clear: The Swiss modeling experts were not able to confirm the alarming Potsdam notions.

In their models they found only low changes in the blocked weather patterns that occur as part of the natural variability took place. In part, the modelling results even contradicted each other so much that they are not very reliable. A trend towards more extreme weather due to increased blockades is therefore not to be feared in Central Europe in the future.

The study appeared in Geophysical Research Letters in May 2020. Besides the Incidentally, lead author Maurice Huguenin was also the well-known ETH climate researcher Reto Knutti involved in the publication. 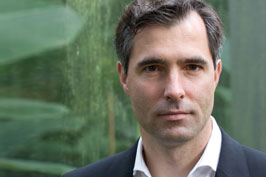 Dr Sebastian Lüning is a habilitated geoscientist and regularly publishes in climate science journals. As a reviewer, he contributed to the IPCC reports SR15, SROCC and AR6. Together with Fritz Vahrenholt he wrote the books “Unwanted Truths: What You Should Know About Climate Change” and “Unchallengeable: The Federal Constitutional Court’s Decision on Climate Protection in a Fact Check”. On Youtube, Lüning presents the news programme “Klimaschau” twice a week.

This article was first published in Tichys Einblick, 17. July 2021