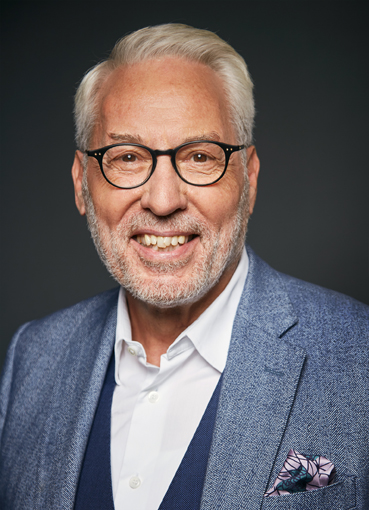 The unusually mild weather at the turn of the year in Central Europe has strengthened the belief of many in Germany that CO2-induced global warming is in full swing. Globally – and this is the only thing that matters – temperatures are developing in a different direction.

If we take the average of the last years, the global temperature has been constant for 8 years and 4 months.

In December, the deviation of the global temperature from the 30-year average of the satellite-based measurements of the University of Alabama (UAH) dropped again, to 0.05 degrees Celsius. To be sure, there is a long-term temperature increase through 2015. But it has averaged only 0.13 degrees Celsius per decade since 1979.

But it gets even better: the latest scientific studies show for Europe that it will first go slightly downhill for 15-20 years. 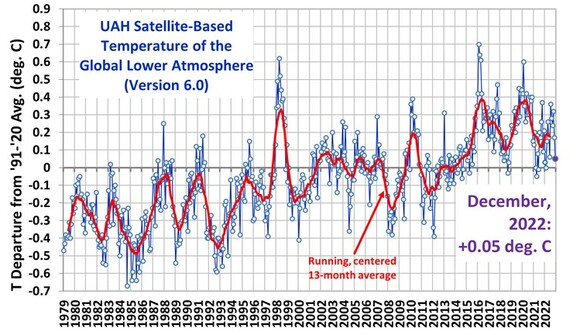 Some climate science heavyweights recently caused a stir in the Nature journal “Climate and Atmospheric Science.” Katja Matthes, director of the GEOMAR Helmholtz Centre for Ocean Research in Kiel, Johann Jungclaus of the Max Planck Institute for Meteorology in Hamburg and Nour-Eddine Omrani of the Norwegian Bjerknes Centre for climate research published a study showing that we are facing a weakening of the North Atlantic Oscillation, a cooling of the North Atlantic and a related global temperature development as between 1950 and 1970 (the authors say in their summary).

The graph shows the decline in North Atlantic temperatures by 2040, but because of the global warming trend, temperatures are not falling back to 1950-1970 levels, explains one of the authors, Eddine Omrani. The expected pause in warming gives us time, Omrani says, to work out technical, political and economic solutions before the next warming phase, which will take over again from about 2050.

Why is the coming cooling in Europe not being reported?

It is astonishing that so far not a single German daily newspaper has reported on this encouraging message. In contrast, the apocalyptic delusion of the “last generation” financed with American foundation money receives wide space and benevolent judges. Hardly anyone questions the false narrative of the people who glue themselves to the street to protest.

Those who suppress such news of impending cooling are complicit in the politically induced destruction of our society. What did Economics Minister Robert Habeck (Greens) say recently in Qatar? He needs natural gas in the next few years, but in 7 years he won’t need it anymore, because Germany will get out of gas by then anyway. Why does he want to get out if it becomes not warmer in the next 20 years in Europe, but rather colder? Won’t we need even more gas than today if it cools down?

The publication of the climate researchers from Kiel, Hamburg, Bergen, Venice and Houston brings us another important insight. The warming of the years 1980 to 2015 was significantly influenced by the warm phase of the Atlantic Ocean. We can estimate that a significant part of the warming can be attributed to this natural cycle. This  period is used, among other things, to make temperature forecasts into the future. However, the models attribute the natural warming contribution to the CO2 effect. This incorrectly calculated, higher CO2 effect is carried forward into the future. Models that do not take into account the natural cyclical influences – and the models are not yet able to do so – thus arrive at warming forecasts that are far too strong.

It should not go unmentioned that there are a number of publications (such as this one involving Matthes and Omrani, Solar forcing synchronizes decadal North Atlantic climate variability) that consider a coupling of the strength of solar cycles with the North Atlantic Oscillation as likely. The last solar cycle from 2008 to 2019 was the weakest in 100 years. The current cycle so far is shaping up to be just as weak. The one-dimensionality of the climate and energy debate, culminating in the claim that CO2 emissions alone determine our climate, is quite frightening.

On 19 January 2023 the congress “Save our industry” is taking place in the hotel Elysee in Hamburg. Participants will include Michael Shellenberger, Prof. Patzelt, Prof. Koch, Dr. Pillkahn, Prof. Mayer, Roland Tichy and yours truly. The event can be found here. Unfortunately, it was already fully booked two weeks after the announcement; more are being planned. However, the Hamburg event can be followed here.

In addition, I would like to point out that my new book: Die Grosse Energiekrise – und wie wir sie bewältigen können (The Great Energy Crisis – and How We Can Manage It) will be published on February 17. The book will be presented at a press conference at the German Press Club in Berlin together with Otto Schily, former Federal Minister. The book has 207 pages and costs 22 €. The book is published by LangenMüller Verlag.