Introduction
This post compares CO2 data from Antarctic ice cores during the Holocene interglacial period with other publicly available CO2 datasets. Antarctic ice CO2 is regarded as the gold standard for paleo-atmospheric global CO2 during past interglacial and glacial periods. Antarctic CO2 does capture the multi-millennial underlying trend; however, short-term centennial trends are not evident. By examining a wider range of CO2 data from Greenland ice and plant stomata, a more complete picture of past natural centennial CO2 fluctuations emerges.

Antarctic Ice CO2 Composite Understates CO2
My last post here focused on CO2 data from Antarctic ice cores. To summarize, the global CO2 composite by Bereiter, 2014, is based on three Antarctic ice cores over the Holocene: Law Dome, EPICA Dome C and shifted WAIS. CO2 shows a strong millennial correlation with Antarctic climate suggesting influence of the Southern Ocean circulation (Bauska, 2015, Ahn, 2012, Siegenthaler, 2005 Marcott, 2014). The global CO2 composite consistently reads 260-280 ppm across the Holocene interglacial period. However, shorter term events, such as the 8.2 kyr cold event, are not captured by a decrease in CO2 and the Younger Dyras (YD) is not very pronounced.

If all public Antarctic data is plotted, CO2 values show more scatter with up to 25 ppm and an average of 7 ppm shown in Figure 1. The largest amount of scatter appears at the end of deglaciation and on the shoulder of the Early Holocene interglacial from 10,500 to 11,500 years BP. This shoulder represents a period of climate instability as the climate transitioned out of the colder Younger-Dryas (YD). These unstable CO2 conditions lasted for about 1000 years. Relatively stable CO2 climatic conditions occur after the CO2 minimum around 8000 years BP where CO2 scatter between ice cores is minimal. The scatter in CO2 over the past 1000 years suggests a return to less stable climate conditions. 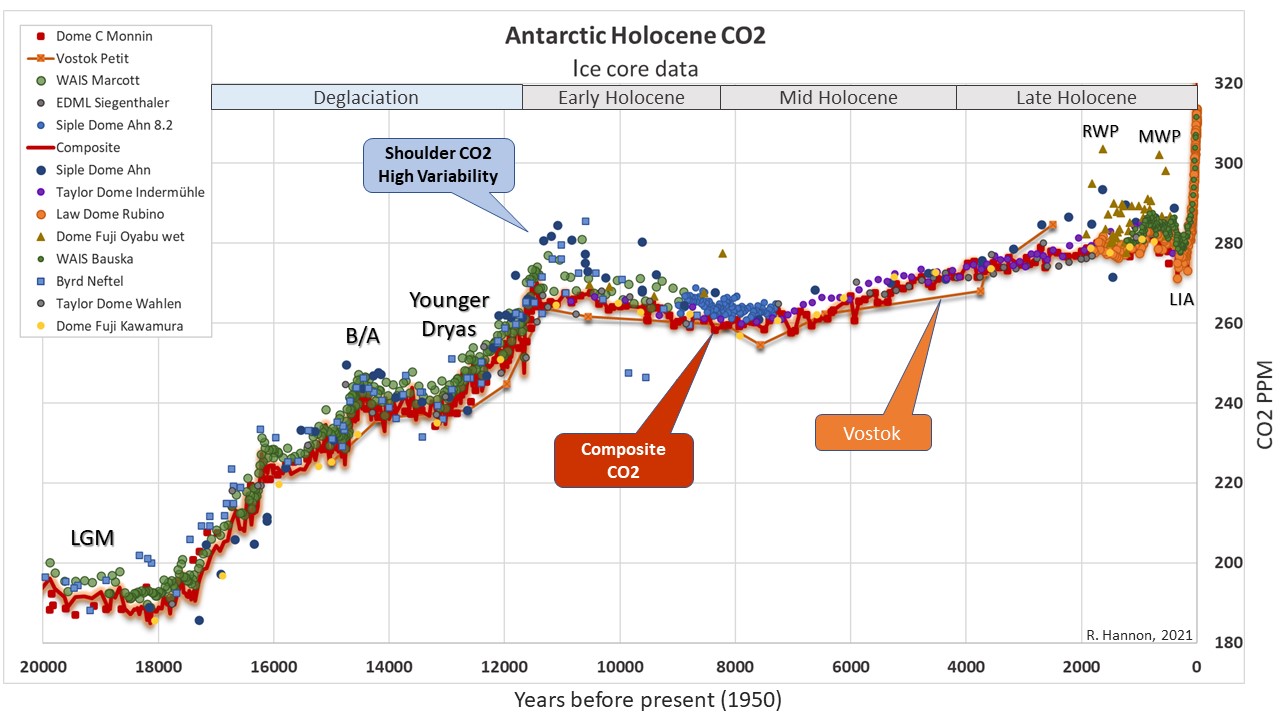 A key observation is that the Antarctic global composite highlighted in red underestimates CO2 values during the early Holocene and perhaps the dynamic behavior of CO2. The widely used composite has lower CO2 readings than other Antarctic datasets by up to 20 ppm. Vostok is also highlighted by an orange line as it is the other CO2 dataset frequently used for past paleoclimate interglacial comparisons. The Vostok CO2 data is even more muted but does captures the long-term millennium trend.

There are two very different processes that impact ice core CO2 data resolution. One is related to gas smoothing during snow densification and the other is simply sample spacing.

Gas smoothing due to the firn to snow transition is site dependent and related to snow accumulation and temperature. Dome C and Vostok ice core sites have low snow accumulation rates and extremely low temperatures resulting in the lowest temporal resolution records. CO2 at these sites is averaged or smoothed over hundreds of years. This smoothing removes high frequency variations from the ice core record. High snow accumulation sites include Law Dome, Siple Dome, Byrd and WAIS where CO2 is only smoothed over tens of years. These ice core records show deviations from the CO2 composite and higher CO2 variability in the early and late Holocene.

In summary, reduced temporal resolution due to firn densification processes and low sample frequency can explain elevated Antarctic ice CO2 levels not captured by Dome C and Vostok but are observed in Law Dome, Siple Dome, Bryd and WAIS.

Greenland Ice CO2 Shows Higher Variability than Antarctic Ice CO2
CO2 measurements from Greenland ice cores are assumed to be unreliable due to in situ production of CO2 by carbonate-acid reactions and oxidation of organic compounds (Anklin 1995, Barnola 1995, and Tschumi 2000). CO2 concentrations in Greenland range up to 20-30 ppm higher than the Antarctic CO2 composite and show more variability with standard deviations of 6-10 ppm compared to 2-3 ppm in Antarctic ice cores.

Figure 2 shows Greenland ice core temperature proxies from oxygen isotopes and CO2 compared to Antarctic ice CO2. Public Greenland ice CO2 data is limited to a few sections within the Holocene; over the past several 1000 years and from 8000 years BP into the last glacial period. 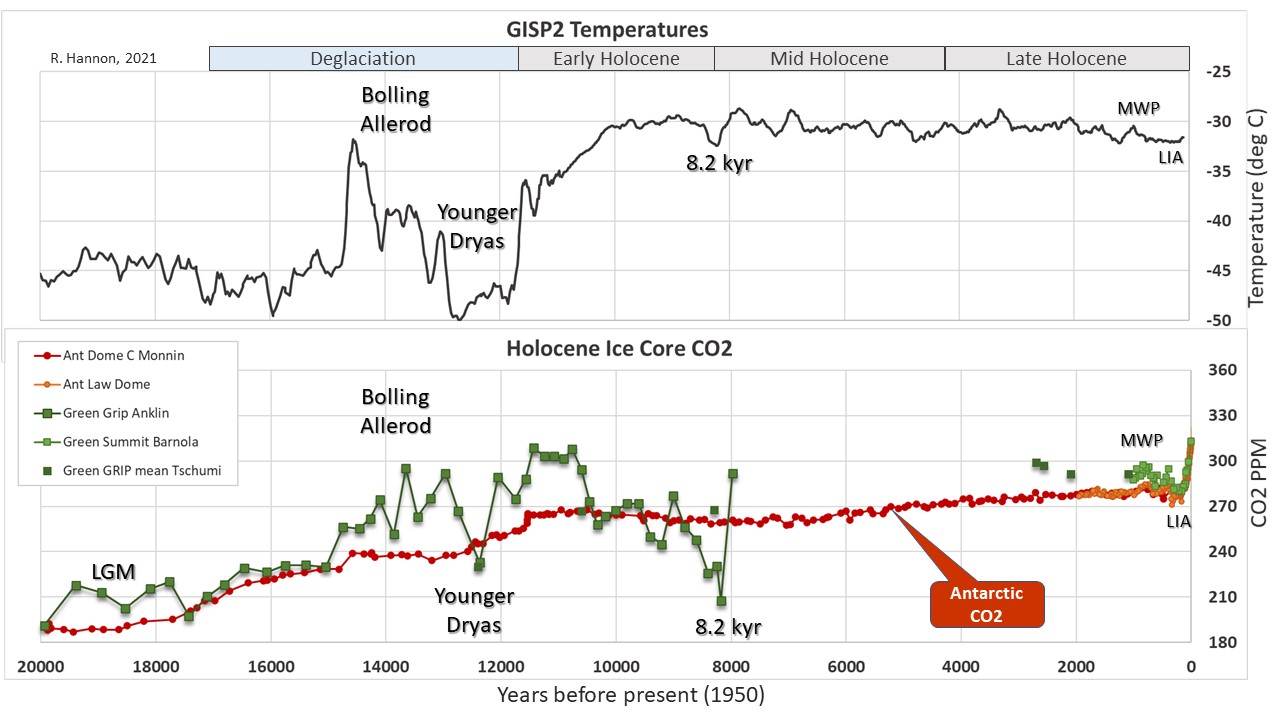 During the Little Ice Age (LIA) and modern CO2 rise, Greenland ice CO2 shows good agreement with Antarctic ice CO2. Greenland CO2 shows an increase up to about 300 ppm during the MWP that is not captured in the Antarctic composite CO2 data. However, other Antarctic datasets show quite a bit of scatter during this time as shown in Figure 2.

Scherelis, 2017, found similar CO2 increases in the Greenland Tunu ice records over the past 1000 years. She conducted a detailed chemical analysis of the ice core and could not find evidence of chemical reactions, a surprising outcome:

“Our study shows that the Greenland ice core record is in fact not as bad for CO2 measurements, compared to WAIS Divide record, as expected. Our results also show that there is no significant increase or decrease in excess CO2 at the peaks in the chemistry data. With no large difference in the excess CO2, the source of contamination may not be due to oxidation and dissolution processes in the ice, which is not what we predicted.”

Stomata from plants are used as a CO2 proxy for paleo-atmospheric CO2 reconstructions (Jessen, 2005; Wagner, 2004). Basically, CO2 enters through a plant leaf’s stomata or tiny pores. When CO2 in the atmosphere increases, plants have fewer stomata. When atmospheric CO2 decreases, stomata in plants increase to compensate for low CO2 levels. Scientists count the number of stomata on different plant species known as the stomata density (number of stomata per area). A more accurate measure is the stomata index (number of stomata proportional to the sum of stromata and epidermal cells) used to minimize the influence of local environmental variables. The stomatal index is also calibrated with modern training sets to calculate the sensitivity to atmospheric CO2 levels. 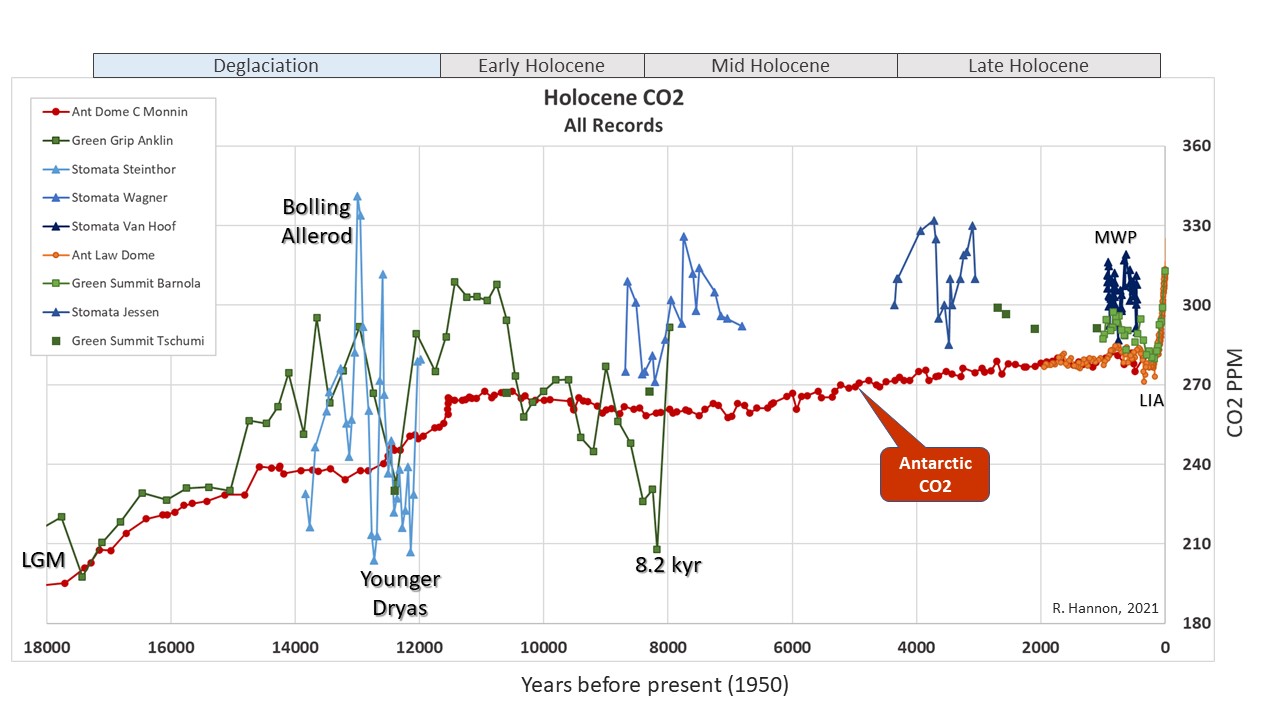 Wagner, 2004, demonstrated CO2 from stomata obtained from different continents and plant species show highly comparable fluctuations during the Younger Dryas, the 8.2 kyr cooling event and the LIA. He states that the agreement of the stomatal frequency records is Northern Hemispheric in nature and not a local continental signature.

Data quality of CO2 proxy from stomata is similar to using tree rings for paleo-temperatures. Both tend to have higher frequency and shorter time series. They can also retain local signatures that may not be global in nature, although use of the stomata index is supposed to standardize local environmental conditions. However, scientists extensively use tree rings, pollen, and corals as well as ice cores for global paleo-temperature reconstructions. For technical completeness, scientists should consider plant stomata short-term variability in paleo-CO2 atmospheric reconstructions.

Holocene CO2 Centennial Versus Millennial Trends
David Middleton in a WUWT post here, presented Greenland ice and plant stomata CO2 comparisons to Antarctic CO2. It is worth revisiting these relationships again. Figure 4 shows the statistics of the various CO2 datasets during key Holocene and deglaciation events. 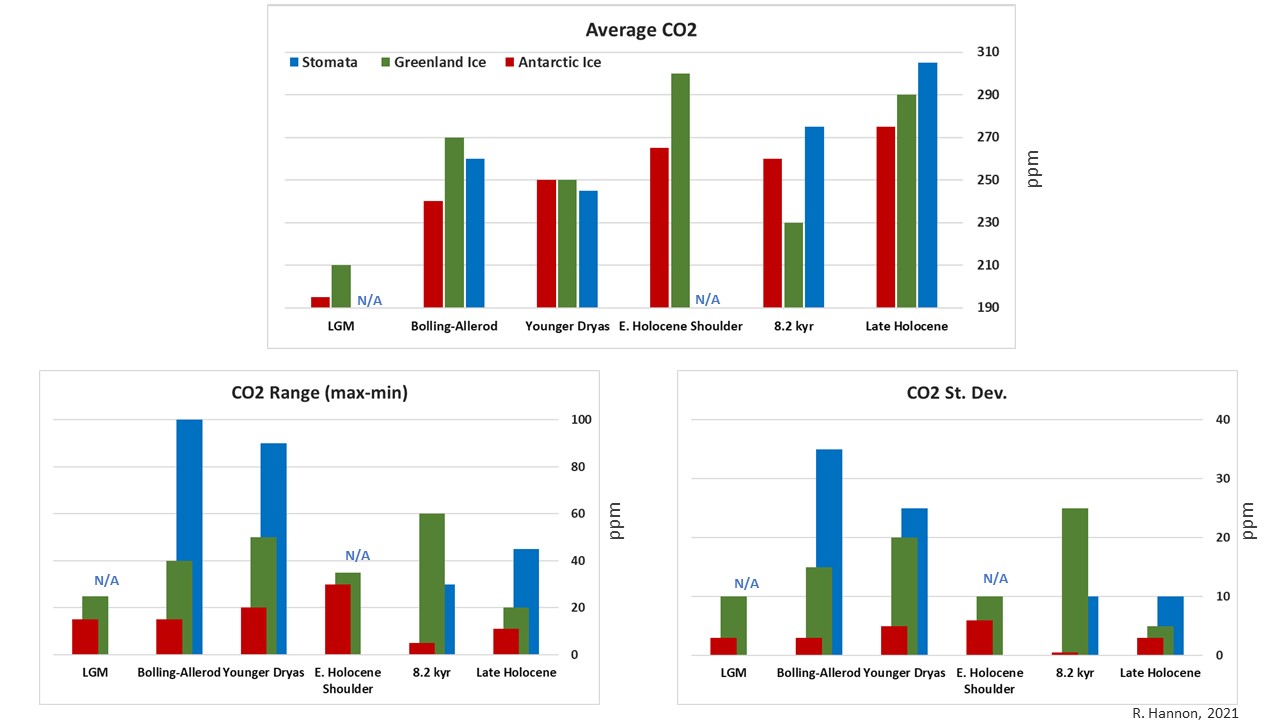 Exclusion of high temporal resolution records combined with sparse sampling produces an incomplete picture of past CO2 variability. Utilizing CO2 data that record past short-term variability, as well as longer-term millennial trends, is essential to understand the natural component of the modern centennial increase. Since these centennial CO2 variations are not observed in Antarctic data, stomata and Greenland CO2 may indicate an additional mode of carbon cycle variability such as abrupt changes in Northern Hemisphere processes. These vastly different records suggest northern terrestrial and oceanic sources work in conjunction with and/or are driven by millennial Southern Ocean process.

Ice core and plant stomata CO2 records are imperfect data and therefore, the global CO2 composite should be inclusive of both centennial and millennial scale deterministic measurements. Perhaps it’s the Antarctic global CO2 composite that is the outlier, suppressed smoothed, and muted by extreme Antarctic temperatures and burial conditions. And the centennial modern CO2 increase is not that unique. 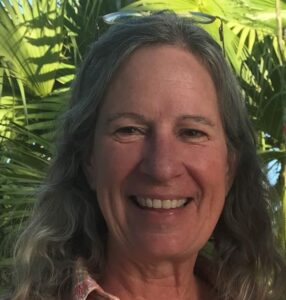 Renee Hannon is a geoscience advisor with a MS degree from the University of Texas at Dallas.  She is a member of the CO2 Coalition, Alaska geologic society, and AAPG.   She spent the past 30 years studying paleo environmental depositional settings, tectonic evolution and source rocks on the North Slope of Alaska.  She managed multi-discipline teams to develop geoscience earth models, reservoir simulation dynamic models, facility development scenarios and economics evaluations for ConocoPhillips, Alaska. She is currently applying her geoscience knowledge and evaluation skillset to advance Paleoclimate sciences.