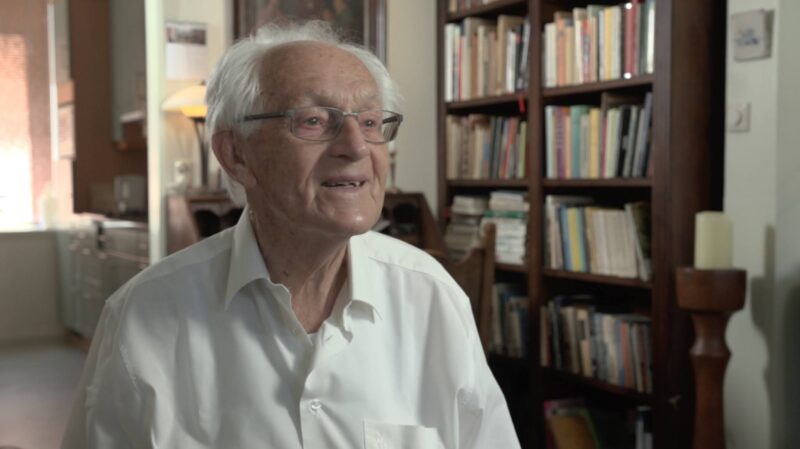 Kees de Jager in 2016 during an interview at his home on the island Texel.
© 2021 De Loods mediaproducties / Stichting Beeldlijn

Kees de Jager was born on April 29, 1921 in den Burg on the Dutch island of Texel, the place where he lived for the last 18 years and where he now passed away. He spent his childhood in the Dutch East Indies (now Indonesia), where his father was principal of a primary school, first in North Celebes (now Sulawesi), where Kees attended primary school, and lateron Java, where Kees completed his secondary education (HBS) in Surabaya and also met his later wife Doetie Rienks. The beautiful starry sky of Celebes made a deep impression on him. His father had already pointed out the different colors of the stars and told him that this meant that they had different temperatures, which greatly interested Kees.

Princeton
In 1939 he left by boat for the Netherlands to study physics at Utrecht University. During the boat trip, in the Suez Canal, news came that World War II had broken out, and he arrived in the Netherlands with a long delay due to an alternative route of the boat. In Utrecht, Professor Minnaert’s astronomy lecture impressed him so much that he decided to study astronomy, much against the wishes of his parents, who had come to the Netherlands on leave a little later. During the war, which started in the Netherlands in 1940, he continued his studies in hiding (he had refused to sign the declaration of loyalty to the occupying forces and should actually have gone to forced labor in Germany). In 1946 he graduated and, as Minnaert’s assistant, began a doctoral research project on the spectrum of the Sun.  His thesis, in which he derived the temperature and pressure distribution in the Sun’s atmosphere from a precise study the shape of the hydrogen lines in the solar spectrum, made a great impression internationally, leading to an offer of a position at Princeton University, which he was unable to accept as the US refused his visa, because of his left-wing sympathies. Thanks to the work of Minnaert and de Jager Utrecht had become an important international center of solar research in the 1950s and 1960s. Their pupils often obtained leading positions in solar physics abroad. Kees remained active in this field until the end of his life: just last year he with collaborators Silvia Duhau and Ad Nieuwenhuizen published a book on the influence of the solar activity on our climate.

In 1957 he was appointed lecturer and in 1960 professor at Utrecht University. In 1963 he succeeded Minnaert as director of the Utrecht Observatory, a position he held till his retirement in 1986.

Satellite ANS
In the meantime, he had seen the great new opportunities for astronomy offered by space research. In 1961 he founded the Utrecht Laboratory for Space Research (now part of the Institute SRON of the Netherlands research council NWO), which within a short time grew to become one of the foremost laboratories in this field in Europe, with more than 150 employees. He led this institute until 1983. He also participated in the establishment of the European space research organization ESRO (now ESA).  In his laboratory, instruments for satellites were built for the measurement of ultraviolet and X-ray radiation from the Sun and stars. With such instruments in the first Dutch satellite ANS, launched in 1974, his PhD student John Heise discovered X-ray bursts from space, caused by explosions of nuclear fusion on the surfaces of neutron stars.

One of the great successes of his laboratory was also an instrument built for NASA’s Solar Maximum Mission satellite. With this instrument, his team discovered in 1980 that during large eruptions on the Sun, so-called “solar flares,” the gas in the solar atmosphere is heated to more than 100 million degrees, as a result of a short circuit of electric currents of trillions of amperes in the outer atmosphere of the Sun, generated by the magnetic fields of sunspots.

Building on the experience gained from this instrument, de Jager, at the invitation of the Soviet Space Agency, built a successful instrument for the Russian space station MIR, for the measurement of X-rays from stars. This instrument made the world press since, after an instrument failure, Russian astronauts managed to repair it thanks to a spacewalk of many hours outside the space station.

Thanks to this pioneering work, the Utrecht laboratory became a world leader in building instruments for X-ray spectroscopy in space, for example contributed to NASA’s Chandra X-ray Observatory and ESA’s XMM-Newton Observatory.

He also founded the international scientific journals “Space Science Reviews” (1962) and “Solar Physics” (1967), of which he for many years was editor.

In addition to being a great scientist and organizer, de Jager was an extraordinarily inspiring lecturer and popularizer of science. The lectures on the structure and evolution of stars given in the 1960s in Utrecht and Brussels (where he was a part-time professor from 1960-1970), laid the foundation of flourishing research groups in this field at the University of Amsterdam, the Radboud University in Nijmegen and the Free University in Brussels.

Sun
Around 1980, De Jager decided to also focus on the study of stars other than the Sun, for which he chose the most massive and luminous stars. He wrote the book “The Brightest Stars” and did important research in this area for decades with a group of co-workers, focusing in particular on the effects of mass loss of stars.

In addition to his scientific work, he always devoted much time to popularizing science. For example, he organized eclipse expeditions with groups of astronomy amateurs, held numerous lectures for laymen, wrote articles and several popularizing books. Thanks to his efforts, the former Utrecht Observatory was transformed into the current “Museum Observatory “Sonnenborgh”, where visitors can learn everything about astronomy and the universe.

In addition to his scientific and organizational talents de Jager proved also to be a gifted diplomat of science. From 1970-1973 he was Secretary General of the International Astronomical Union, and with the support of both the United States and the Soviet Union, he was twice elected President of the world space research organization COSPAR (1972-1978 and 1982-1986). Also, from 1978 on he was several years president of the International Council of Scientific Unions (ICSU). During these presidentships, he brought several delicate problems between countries about the organization of science to a satisfactory solution. He himself attributed his diplomatic gifts to the contacts in his youth with the Indonesian culture, with its refined manners.

Skeptical Society
Kees was also the co-founder and chairman of the Netherlands Skeptical Society, and president of the council of European skeptical societies, dedicated to fighting pseudoscience and quackery, to which he devoted much attention after his official retirement as professor in 1986.

In the last decades he also proved to be a gifted writer. For many years he wrote the column “Terugblik” (Retrospective) in the Netherlands popular astronomy monthly Zenit. These columns ranged from memories about his childhood times in Indonesia to the resolution of diplomatic problems between countries. His last column will appear next month. Part of these columns have been collected in two books with the same title, which show how great and humorous a storyteller Kees was. These books can be seen as a kind of autobiography.

Kees was from his childhood on Java very interested in athletics, especially long-distance running. Even at the age of 75 he still ran the entire New York marathon.

For his scientific work de Jager received numerous national and international distinctions, including two honorary doctorates and the Gold Medal of the Royal Astronomical Society, one of the highest international awards in astronomy.

With the death of Kees de Jager, an exceptionally inspiring scientist has passed away.

More information about his work can be found on his website: http://www.cdejager.com/