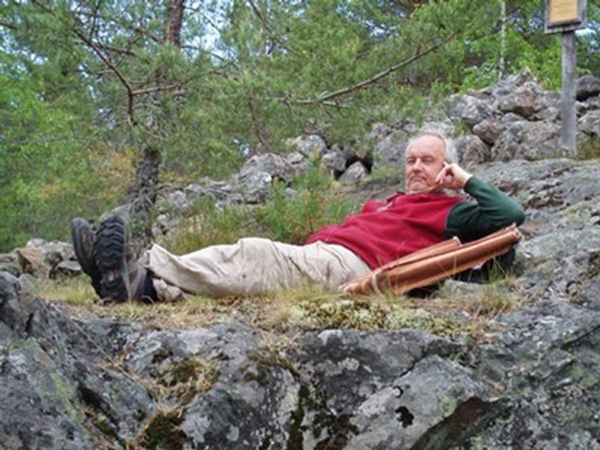 Professor Nils-Axel Mörner, who died on Friday October 16 aged 83 after a short illness, knew more about sea level than did Poseidon himself. He wrote more than 650 papers on the subject in his long and distinguished career. He became even more well-known after his retirement than before it, because he decided to take the risk of publicly opposing the false notion, profitably peddled by the Intergovernmental Panel on Climate Change et hoc genus omne, that global warming would cause many meters of sea-level rise.

I first came across Niklas Mörner when he and I met at St. Andrews University in Scotland, where we had been invited to debate the climate question with true-believers at the University Union, one of the oldest debating societies in the world.

At the beginning of the evening, the President asked us whether we minded taking part in a debate in which 97% of the students were against our viewpoint. Niklas replied cheerfully that he had faced worse odds than that.

During the debate, Professor Mörner’s speech won us the day. Within seconds, he had the undergraduates eating out of his hand. His manner was calculatedly eccentric, and yet all through his speech one could see how passionate he was about seeking scientific truth objectively by measurement, observation and the application of previous theory to the results so as to confirm and develop or to overthrow that theory. Either way, said Niklas, science advances by little and little towards the truth, and nothing but the truth matters. 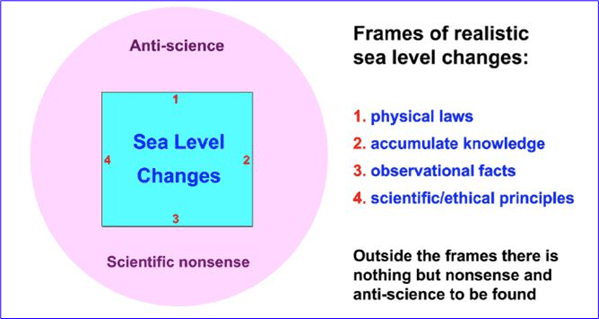 The scientific method applied to sea-level change: a slide by Niklas Mörner

The undergraduates were visibly fascinated. After 40 years of lecturing, he knew that keeping them entertained was the best way to hold their attention, and that making visible his personal dedication to the hunt for objective truth in scientific enquiry would lead the students to emulate him. He was rapturously received throughout his speech, and was accorded a thunderous round of applause at the end.

When the vote was taken, the skeptics had won by a margin of 3 votes. It was the first time that any student audience in Britain had voted to oppose the climate-Communist Party line.

Thereafter, Niklas and I kept in regular touch until just a couple of months ago, when he wrote asking me to contribute two papers to a new scientific journal that he was setting up. He wanted one paper on What is science and what is not? and another on our team’s demonstration that concern about global warming sprang from an elementary but significant error of physics.

At the Copenhagen climate conference in 2009, Niklas gave a speech on sea-level rise to a press briefing organized by the Committee for a Constructive Tomorrow. The meeting was well attended, and Niklas – who needed a pointer for his slides but could not find one – seized a passing wooden salad fork and used that instead, to the delight of the journalists.

He also established the influential International Committee on Geoethics, with the aim of removing partisan politics and reintroducing open debate on scientific questions at universities. The Committee held its inaugural conference in Prague, where the presentations were given in the Spanish Ballroom of the Hradcany Palace at the invitation of then-President Vaclav Klaus, who also spoke. 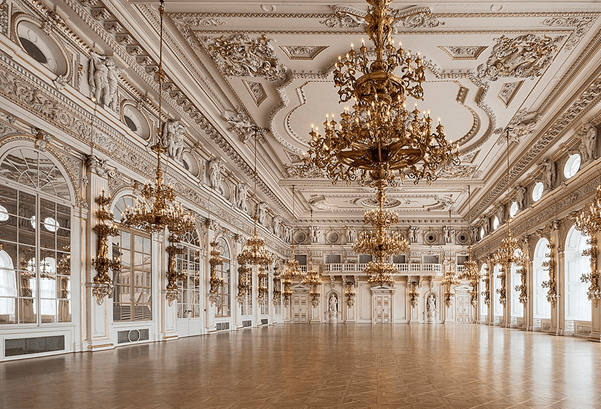 Geoethics in style: the Spanish Ballroom at the Hradcany Palace, Prague

Professor Mörner was a hands-on scientist. He did not enjoy squatting in his ivory tower. He liked to travel the world investigating sea level by the novel method of actually going to the coastline and having a look.

On one occasion, when the climate Communists were reporting that Bangladesh was subsiding beneath the rising waves, he went on a fact-finding trip to Bangladesh with a group of fellow sea-level specialists. All the others were true-believers, so they just drifted along with the Party Line and took few measurements.

Only the Professor not only used his altimeter but walked 100 meters uphill, in his late 70s, and back down again so that the instrument would be correctly calibrated. Only the Professor subsequently reported that, as a result of those measurements, sea level off Bangladesh was actually falling. Only the Professor reported that in the few beaches where the sea had encroached, it had done so not because of global warming and consequent sea-level rise but because local prawn farmers had grubbed up the mangroves whose roots had previously kept the coastline stable. 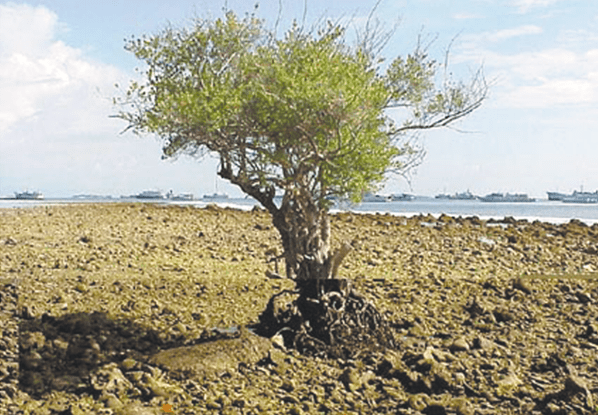 The Tree of the Knowledge of Good and Evil

On another occasion Professor Mörner was visiting the Maldives when he noticed a small tree, 40 years old, right on the beach, in leaf but lying on its side. The fact that the tree was still there, feet from the ocean and inches above sea level, after 40 years told him that there had been no sea-level rise since the tree had first begun to grow, or it would have been drowned.

He enquired locally about whether there had been an exceptional spring tide caused by global warming and sea-level rise that had overthrown the tree. He discovered, however, that a group of Australian environmental extremists had visited the beach shortly before him. They had realized that the presence of the tree showed that the official sea-level record showing a sharp rise over the past half-century must be incorrect, and had uprooted the tree. Professor Mörner stood it back up again and photographed it.

He was plainly very distressed by incidents such as this, for he was a highly moral man with a strong regard for the truth. He took each of the numerous lies and frauds perpetrated by climate Communism as a personal affront, and was saddened at the widespread decline in scientific standards, particularly in the universities. 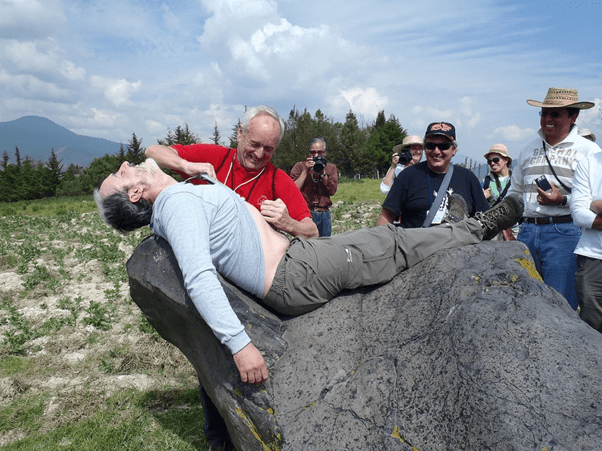 He was hated and feared by the climate extremists. The online fake-news outfall Wokipedia, one of whose founders has now publicly admitted that it is wholly in the hands of Communists, has the usual hatchet-job biography for the Professor, devoting more sniffily disapproving prominence to his interest in dowsing for water with hazel twigs than to his formidable record of investigation and publication in the field of sea-level rise.

Wokipedia’s hate-filled scribblers did not – could not – comprehend that Niklas Mörner’s interest in dowsing was motivated chiefly by scientific curiosity. I once told him that my late father had been commissioned some years back by the Maltese Government to find three Punic tombs at the foot of the limestone escarpment on which stands the lofty village perché that is the ancient walled city of Mdina. Local archaeologists had records showing that the tombs existed, but they had never been found.

My father, armed with two angled steel rods, marched up and down the stony fields below the ramparts for half a day, putting sticks in the ground at various points. The sticks formed three separate crosses. Where each of the crosses intersected, my father told the workmen to dig. In each place, a fine Punic tomb was found – though there had been absolutely no sign of any such thing on the surface. From one of the tombs a fine half-size marble bust of a Roman was removed. I sketched it (there were no cellphones, let alone cellphone cameras, in those days) and sent the sketch to the Museum of Classical Archaeology at Cambridge, where it was identified as a good example of a first-century head of Seneca.

Niklas was greatly excited by this story, and asked me how I thought dowsing might work. I said I had no idea. All three of my brothers had the gift, but I – for some reason – did not. But I had seen my father dowsing for – and finding – a major Roman iron-working and Samian-ware pottery-firing settlement on his farm in Kent.

I also told Niklas that when I had invited my father to Cambridge to have his dowsing ability tested under laboratory conditions he had firmly declined, though he told me that he had won a lot of money while at Cambridge when in the pub by leaving the room and inviting his fellow-undergraduates to hide a signet ring under one of them.

He said the only time he had lost the bet was when someone turned on a tap at the wrong moment and water passed through a pipe under the floorboards where the three caps lay.

I had the honor to co-author a paper with Niklas for a climate-change conference at Downing College, Cambridge. The paper was uncompromisingly titled Sea Level Is Not Rising. The organizer, who had made his fortune selling pills and potions and had hoped for a quiet conference, refused to allow the paper to be distributed, though he had previously consented. The papers were gathered up and taken away.

However, I mounted a raid on the store where they were hidden and made sure that a copy was on every seat. The climate Communists present were furious, but the students who attended were intrigued, particularly when they began to read arguments, facts and data that had been denied to them by their professors throughout their time at Cambridge. Niklas was delighted at what he called my SAS raid.

It is honorable men like Niklas Mörner whose legacy to the world is as much of merriment as of the relentless pursuit of truth. Like St. Thomas More, I can confidently write that my old friend is now as “merry in Heaven” as he was merry, and gave merriment to all whom he touched, here below.

A couple of weeks before Niklas died, I wrote to cheer him up. I ended the letter with a poem that described Niklas perfectly. It is St. Thomas Campion’s free but beautiful translation of the Horatian ode Integer vitae scelerisque purus:

The man of life upright,
Whose cheerful mind is free
From weight of impious deedes
And yoke of vanity,

The man whose silent days
In harmless joys are spent:
Whom hopes cannot delude,
Nor sorrows discontent,

That man needs neyther towers,
Nor armour for defence:
Nor vaults his guilt to shroud
From thunder’s violence;

He only can behold
With unaffrighted eyes
The horrors of the deep,
And terrors of the skies.

Thus, scorning all the cares
That fate or fortune brings,
His Book the Heavens he makes,
His wisdom heavenly things.

Good thoughts his surest friends,
His wealth a well-spent age,
The Earth his sober inn,
And quiet pilgrimage. 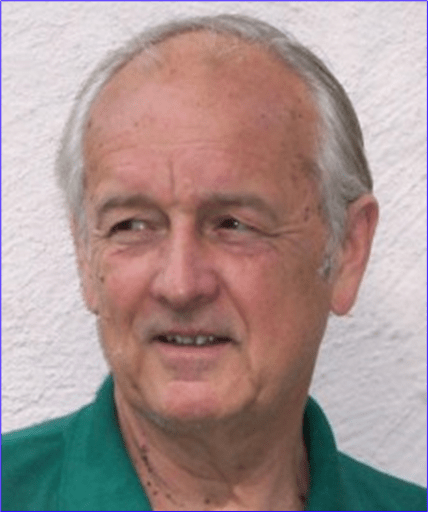