New Yorker Magazine Has a Moral Obligation to Open the Climate Debate Before COP26, says Friends of Science Society 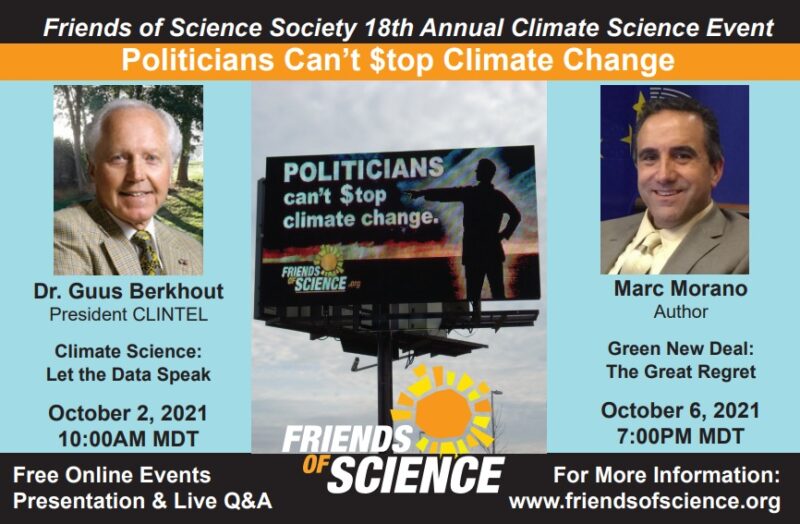 In response to a recent podcast by David Remnick with Swedish climate activist Andreas Malm, who advocates sabotage for critical infrastructure that underpins modern society, The New Yorker has a moral obligation to open up the climate debate and demonstrate that fears of a hellscape world are exaggerated, says Friends of Science Society. Swedish climate scientists Hans Jelbring and Gösta Petterson and the more than 900 scientists and scholars of CLINTEL say there is no climate emergency.

In response to the Sept. 27, 2021, interview in The New Yorker with Swedish climate activist Andreas Malm who advocates for ‘intelligent sabotage’ of critical infrastructure that underpins modern society, The New Yorker is morally obliged to interview Swedish climate scientists like Hans Jelbring to calm the dangerous rhetoric of Malm before the November 2021 COP26 climate conference, says Friends of Science Society.

As discussed in the LA Review of Books of Jan. 2021, Malm’s case is that humanity faces a ‘hellscape’ earth, and thus rather than march in the streets, climate activists should sabotage equipment of energy developers and providers.

Friends of Science says extremist rhetoric from Malm and groups like Extinction Rebellion exist because of the lack of media coverage of rational, dissenting, scientific views on climate change. The promotion of climate hysteria by Columbia Journalism Review’s “Covering Climate Now” project exacerbates the public fears, where some 400 media outlets preach climate catastrophe to an audience of 2 billion people. This one-sided coverage and intentional polarization has now created a danger for society itself with media giving a profile to people like Malm.

A sober reading of the ~4,000-page United Nations IPCC AR6 report released last month, mentions ‘climate emergency’ and ‘climate crisis’ only once on a page about media coverage. The alarming ‘hockey stick’ graph that appears in the IPCC Summary for Policy Makers (that makes it seem as if now is the hottest time ever) does not appear in the scientific document as explained in this Friends of Science video – obviously an effort to manipulate policymakers and the media. The ‘hockey stick’ data set has been deconstructed by Steve McIntyre of Climate Audit.

Roger Pielke, Jr. explains that this IPCC report has abandoned the view of a ‘hellscape’ future for humanity associated with a scenario known as RCP 8.5 and contrary to Malm’s claim that wildfires and floods are evidence of climate change, Pielke, Jr.’s review shows the scientific report of the IPCC does not see any such trends. Pielke, Jr. and colleague Justin Ritchie have shown in a peer-reviewed study that most catastrophic thinking on climate has stemmed from persistent use of the RCP8.5 scenario ‘as if business-as-usual’ when it is implausible. These scenarios were only meant for climate research and not for policy making.

Malm’s claims about wildfires as evidence of climate change are misinformed, as Friends of Science Society explained last year to a SLATE journalist in this post and video. Likewise, this year’s alarming heat that occurred coincident to the tragic Lytton, BC fire can be understood by atmospheric conditions, as explained by Jean van Vliet and Brigitte van Vliet-Lanoie.

Friends of Science Society calls on The New Yorker to be responsible and open up the debate on climate science with qualified scholars holding dissenting views such as Swedish scientist Gösta Petterson (author of “Falskt Alarm/False Alarm” – his work promoted in English by Elsa Widding), or any of the scientists and scholars of CLINTEL, the climate intelligence organization of over 900 signatory scientists and scholars who state there is no climate emergency.

The CLINTEL World Climate Declaration can be read here.

CLINTEL’s president, Dr. Guus Berkhout, will be the first speaker at Friends of Science Society’s 18th Annual Event, online, this Saturday, October 2, 2021, at 10 a.m. MDT/12 p.m. EDT . Dr. Berkhout will present “Climate Science: Let the Data Speak” and will show how the actual data does not support the ‘hellscape’ fears and rhetoric of activists like Malm.

At the first of October 2021, CLINTEL has started The Laboratory for Climate Imaging International (LCI INT). It will function as the counter organization of IPCC. Instead of an intergovernmental organization, being IPCC’s status, LCI INT will be an international organization. Instead of climate modelling, being IPCC’s focus, LCI INT will concentrate on climate imaging. This means that in LCI INT data will be the starting point.
Until today, a huge amount of climate data has been collected, but a lot is under- or even wrongly analysed. IPCC’s theoretical models have attracted almost all attention. LCI INT uses the slogan: “Let the Data Speak”.
The researchers in LCI INT will consist of experts in imaging technology from different fields. LCI INT will be part of CLINTEL and professor Berkhout will be its scientific leader. LCI INT plans a jump-start.
In its first half year LCI INT will extensively investigate the double-averaging errors in the Global Warming Curve, as the latter is already the centre of 40 years climate debate. The budget for this half year is estimated at € 100.000. If you want to support LCI INT, please go to the DONATE page of clintel.org and add “LCI” in the comment bar.

There will be live Q&A following each presentation. Both events are free to the public.

By CLINTEL Foundation|2021-10-01T12:20:35+02:0030 September 2021|Canada English, News, The Netherlands, USA|Comments Off on New Yorker Magazine Has a Moral Obligation to Open the Climate Debate Before COP26, says Friends of Science Society