Reducing carbon dioxide at home while China keeps on growing

Reposted from the Manhattan Contrarian 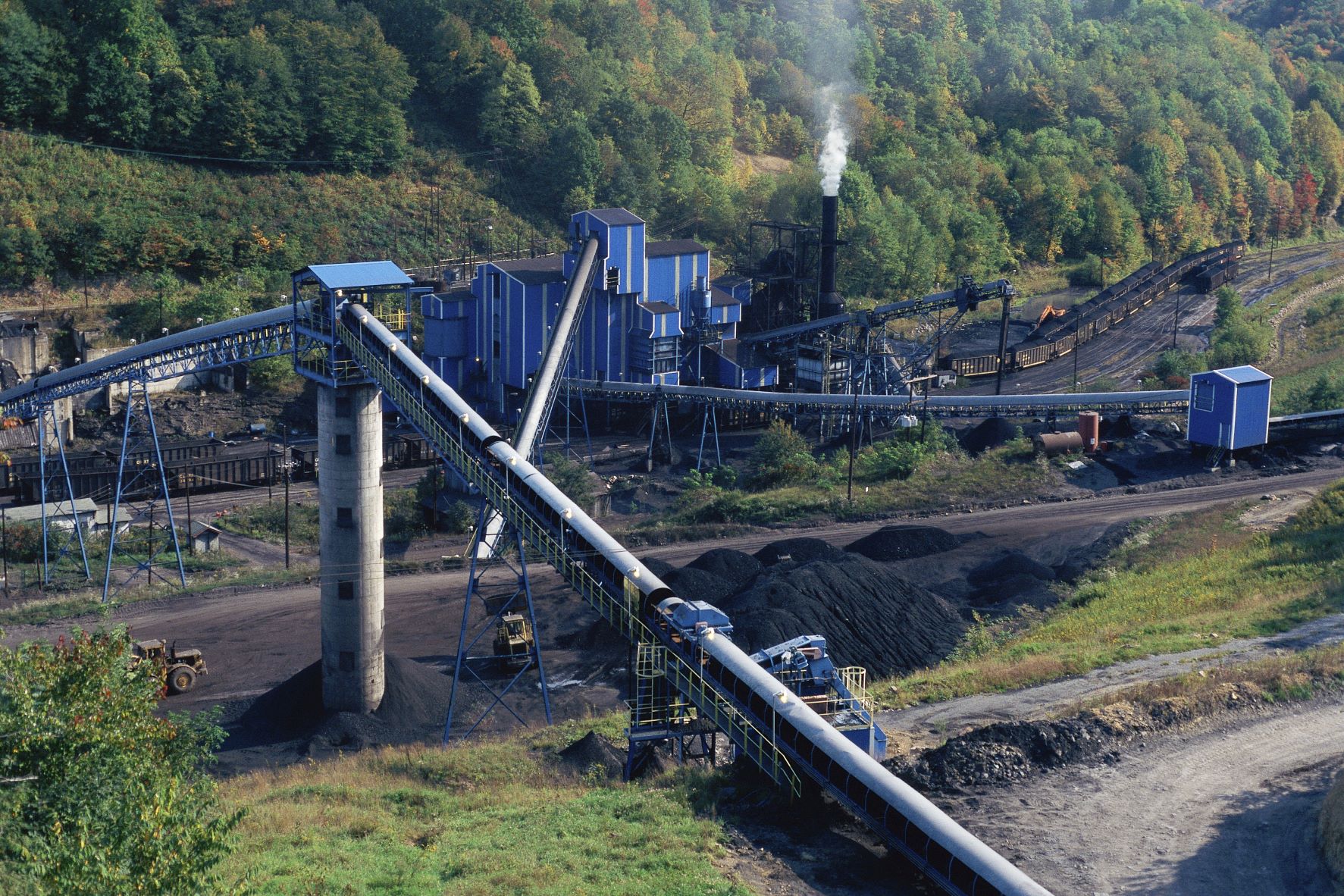 The Supreme Court’s West Virginia v. EPA decision a couple of weeks ago has brought forth a big wave of hand wringing in the precincts of the left. How oh how are we now going to save the planet, if our friends at the EPA can no longer order up a nation-wide energy system transformation on their own authority? A couple of examples of the genre come from Ron Brownstein in the Atlantic, and from Coral Davenport in the New York Times, both from Friday July 15.

The funny thing about these pieces, and many others like them, is that the authors seem to have completely lost track of, or failed to follow, what has happened and continues to happen in the arena of international energy consumption. When I started to follow this area in about 2000, the U.S. and Western Europe together accounted for close to two-thirds of world energy consumption, the large majority of it from fossil fuels. Perhaps at that time it was plausible to believe that if only the U.S. and Western Europe could be weaned off the fossil fuels, and could show how that could be done, then the rest of the world would quickly follow along.

But that was more than two decades ago. In the intervening twenty-plus years, the U.S. and Europe have achieved some small reductions in their emissions, but the emissions from the developing world — mostly but by no means exclusively from China — have soared. And they continue to soar. Neither China nor any other large-population developing country has agreed to forego using coal or any other fossil fuel to achieve rapid economic growth. Today U.S. emissions stand at about 15% of those of the world, and continuing to shrink rapidly as a percentage, even if they remain about steady in absolute terms.

Brownstein’s piece in the Atlantic has the title “Mother Nature Dissents,” rather presumptuously implying that “Mother Nature” disagrees with the Supreme Court’s legal reasoning. The heart of the piece is the usual cherry-picked assortment of extreme weather events, as if every year does not have some extreme and record events somewhere.

With record heat in Texas that is testing the state’s power grid, a California wildfire that has threatened an ancient grove of sequoias considered a foundation stone of the national-park system, and persistent drought across the West that is forcing unprecedented cutbacks in water deliveries from the Colorado River, the summer of 2022 already is shaping up as another season of extreme and dangerous environmental conditions.

Does that seem somehow persuasive to you? If so, you might consider looking at the most recent report of the global satellite temperatures from UAH, which shows that the overall temperature anomaly for the most recent month (June) was +0.06 deg C, barely above the 1991-2020 average, and significantly down from a most recent peak of +0.7 deg C back in 2016. If we are having unusually hot weather in Texas and California, yet the overall world temperature is just about average, then clearly it must be well below average somewhere else. And sure enough it is. From Roy Spencer at UAH:

But for Brownstein, a few weeks of hot weather in Texas and California clearly mean that the U.S. government must “do something” to change the climate. And the something is meeting the “carbon reduction targets” of the Paris Agreement of 2016. Moreover the blue states can’t do this on their own, so the feds must act. After all, “scientists say” so:

[I]t’s highly unlikely that action in blue states (and cities) alone will be enough for the U.S. to meet the carbon-reduction targets that scientists say are required to avoid the most catastrophic environmental changes.

Davenport equally reports that “scientists say” that the U.S. must cut its emissions significantly by 2030, and that will somehow affect the climate:

Mr. Biden [has set a] target of cutting the nation’s emissions 50 percent from 2005 levels by 2030. That is the amount that scientists say the United States must reduce its emissions in order to do its part to avoid the most catastrophic near-term impacts of climate change.

Neither the Brownstein nor the Davenport piece so much as mentions what is going on with fossil fuel use and carbon emissions elsewhere in the world, or the extent to which those developments completely nullify anything the U.S. could ever possibly do to reduce emissions. Consider, for example, recent developments in the production of coal. The U.S. Energy Information Administration puts out an annual report on U.S. coal production, most recently in October 2021 covering the year 2020. They report that U.S. coal production decreased by some 24.2% in 2020 over 2019, falling to 535.4 million short tons. Much of that large reduction was undoubtedly a Covid-related blip that will not be sustained, but assume for these purposes that the U.S. can continue to make such dramatic reductions in its use of coal. The problem is that by this time China produces and uses a multiple of the amount of coal used here in the U.S., and continues to increase its production at a rapid and accelerating rate. From NPR, April 25:

Official plans call for boosting coal production capacity by 300 million tons this year, according to news reports. That is equal to 7% of last year’s output of 4.1 billion tons, which was an increase of 5.7% over 2020.

In other words, China’s coal production and consumption are close to 8 times the levels of the U.S., and just two years of annual increases are approximately equal to full U.S. annual production. Here is a graph from Our World in Data showing the trajectory by which China’s coal production went from approximately equal to that of the U.S. in 2000 to some 8 times as much by 2020 (which is before the further increases noted above by NPR): 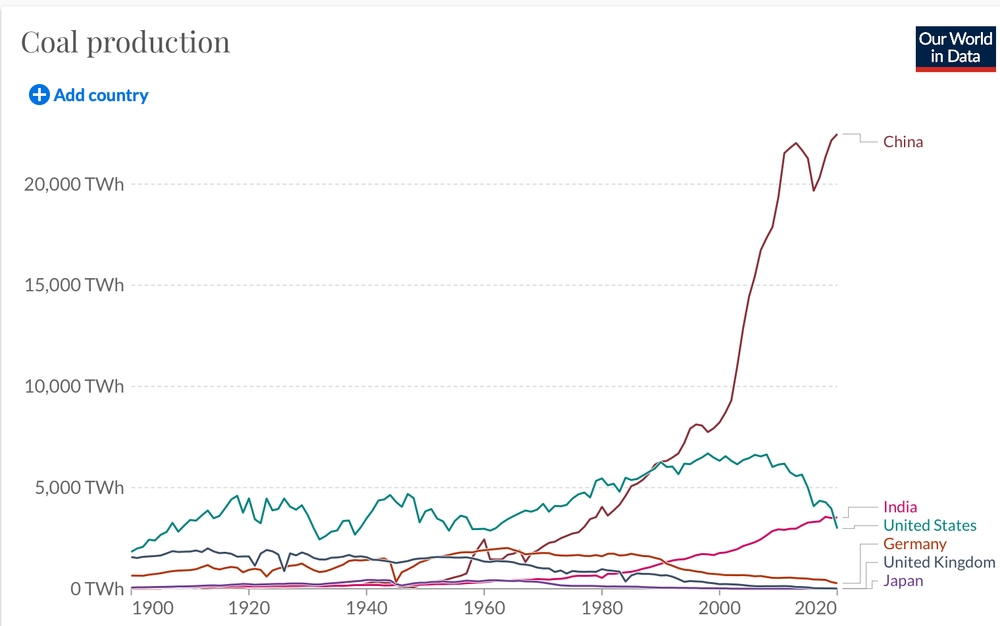 Note that in that chart India has also risen past the U.S. in coal production. And with nearly 1.4 billion people — four times the population of the U.S., and just slightly less than that of China — India would well multiply its coal production by 8 over the next 20 years, just as China has done over the past 20. It has made no commitments not to do so.

Brownstein, Davenport, and the rest of the fossil fuel suppression advocacy machine seem blissfully unaware that events have passed them by. By this time, nothing can be done to make it such that reduction in U.S. carbon emissions can result in a meaningful difference in the overall world picture. Fortunately, the likelihood of any catastrophic consequences to the climate is extremely remote.