Nicola Scafetta has written a new paper (Scafetta, 2021) in Atmosphere on a new millennial surface temperature reconstruction. This is his latest “what if the models are accurate?” analysis. Scafetta’s idea is, let’s assume a model is correct, what are the implications?

Previously, he examined the PMOD solar model, by assuming it was correct and the Sun is invariant long-term, does this make sense? Another example, if we smooth through the urban heat island effect (UHI), do we eliminate it, or just smear it out, so the data looks better, but is just as inaccurate? In the latter post, on UHI, I wrote:

It is possible, according to Scafetta’s correction, that non-climatic biases may have contributed a fifth of the reported HadCRUT global warming since 1940-1960. It is also possible that the CMIP5 climate models may overestimate warming by a third. These are significant problems.”

Computer models have a downside. They can be used by those on the other side of the debate. If they lead to absurd or inconsistent conclusions, they make you look foolish. What if Scafetta assumed that the HadCRUT recent temperature record is correct? Then he further assumes that the CMIP5 (Coupled Model Intercomparison Project Phase 5) ensemble mean is correct, what does this mean for past temperatures? Do we find inconsistencies?

Scafetta did a frequency analysis of the temperature records since 1860, and reconstructions of Holocene climate and identified at least eight significant frequencies. One of these is a well-known and strong millennial signal, which is often associated with the Eddy solar cycle. This is the oscillation that probably caused the Medieval Warm Period (MWP) and the Little Ice Age (LIA). We can presume that these oscillations are natural and are probably due to variations in solar output. Javier has discussed the evidence for the millennial cycle or oscillation and says:

“Within the paleo-climatological scientific community there is widespread acceptance of millennial cycles during the Holocene because their effects are observed in most climatic proxies, and there is ample agreement over certain periodicities that come out of frequency analysis and are in phase from multiple proxies at different locations.”

It is well known, but poorly understood, that natural climate variability is composed of natural oscillations. Examples are the Atlantic Multidecadal Oscillation (AMO), the El Nino Southern Oscillation, the Pacific Decadal Oscillation (PDO) and others. These, and many others, have been observed, but never explained to everyone’s satisfaction. As a result, the magnitude of their effect on our climate is unknown and the CMIP5 global circulation models (GCMs) do a poor job of simulating them. It goes without saying that if we cannot measure natural variability in climate, we cannot compute the human influence on it. We have a temperature record of unknown accuracy, models of unknown accuracy, and natural climate oscillations we don’t understand, what are we to do?

Scafetta assumes the HadCRUT4 temperature record is accurate. Then, he models it as a function of the stronger observed climate oscillations, records of volcanic eruptions, and anthropogenic influences. His analysis of the model results suggests that the natural climate oscillations provide about half of the warming seen from 1970 to 2000, when the AMO was in a warm phase. When the various shorter (70 years or less) oscillations are combined, they result in a ~60-year climatic oscillation that is evident in historical, archaeological, and paleoclimatic data for many millennia. Figure 1 shows the HadCRUT4 record (blue) and Scafetta’s model in red. The model shown uses a computed anthropogenic input based on the CMIP5 models, but while they use an assumed climate sensitivity to CO2 (ECS computed from the CMIP5 ensemble model mean) of ~3°C, Scafetta uses 1.5°C/2xCO2 to accommodate his estimate of natural forcings.

Figure 1. HadCRUT4 in blue and Scafetta’s model of it in red. This is from Figure 4 in his paper. The HadCRUT4 data stops in 2013 as a test. Notice Scafetta’s model accurately reproduces the 2016 and 2020 peaks in temperature. See his paper for more details on the model. Scafetta seems to also have predicted the sudden drop in temperatures seen at the end of 2020 and the beginning of 2021.

Next, he extends the CMIP5 models back in time with data from a reconstruction of climate forcings by Thomas Crowley (Crowley, 2000). The reconstruction depends on both Crowley’s data and the CMIP5 models of the anthropogenic, volcanic and solar “forcings.” The extension to 1000AD is shown in Figure 2, where the blue line is Scafetta’s CMIP5 extension and the pink line is the CMIP5 multi-model mean. The CMIP5 solar radiation model is shown in red and the same model extended into the past is shown in black, basically the models assume that the Sun hardly varies over the long-term. 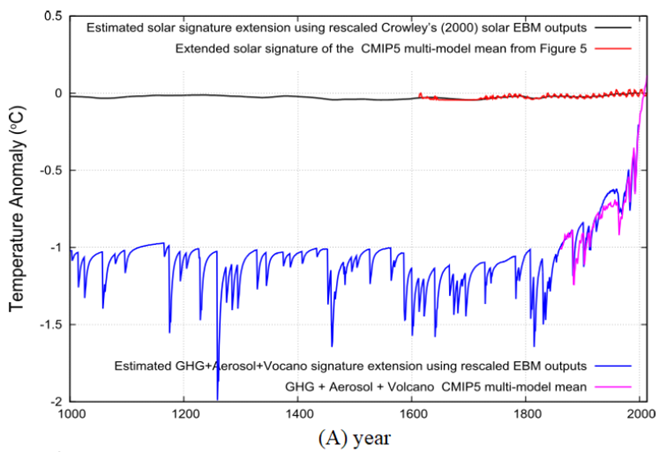 In Figure 3 we compare the results to the Moberg, et al (Moberg, Sonechkin, Holmgren, Datsenko, & Karlen, 2005) temperature reconstruction from 1000AD. 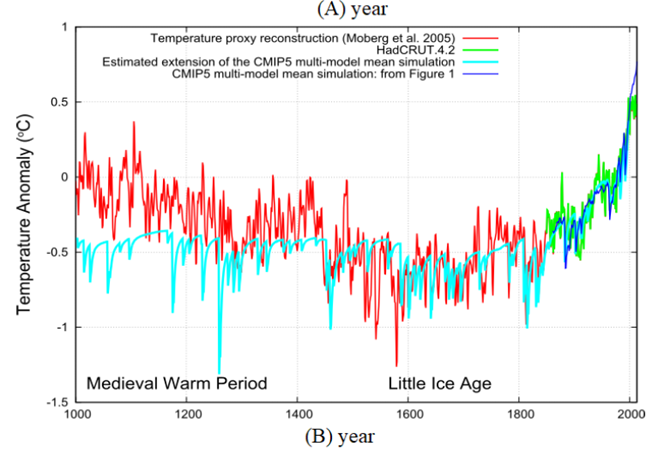 Clearly, the CMIP5 model does not successfully capture the Medieval Warm Period (MWP). There was no significant difference in volcanic activity, land use, or in CO2 or other greenhouse gas concentrations, and these are what drive the CMIP5 models. As you can see in Figure 4, from the IPCC AR5 Synthesis Report (page 6), the CMIP5 models assume that natural variation and internal climate variability are zero. So, they have no way to compute the MWP warming shown in Figure 3. 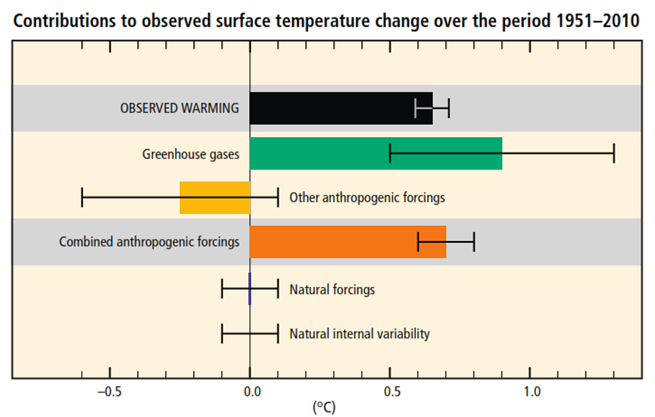 Figure 4. The factors that drive the CMIP5 climate model results. Natural forcings, such as solar variations, and internal variability, the oceans, are assumed to net to zero on climatic time scales.

The assumptions shown in Figure 4 work OK after the Little Ice Age (LIA). This is probably because the natural forcing is trending upward in a similar fashion to the CO2 concentration. By assuming that the Sun is invariant, they can assign all the warming to CO2. This assumption, that there is no natural variability over long periods of time, leads the IPCC to the mistaken assumption that ECS is 3°C/2xCO2. This assumption breaks down in the MWP.

Solar variability cannot be proven to have caused the MWP, but there is little else that could have caused it. Here, by solar variability, we mean the amount of solar radiation reaching the Earth, especially the Earth’s surface. The radiation reaching the Earth’s surface could vary because the Sun varies, as stars like the Sun do. Or it could be due to other, natural astrophysical effects, such as, variations in the solar wind, cosmic rays, or the orbits of the Moon or other planets.

The millennial oscillation has been very persistent throughout the Holocene Epoch, or the past 12,000 years. It gave us the Roman Warm Period, the Dark Ages, the Medieval Warm Period, the Little Ice Age and the Modern Warm Period. The Modern Warm Period is also, at least partially, influenced by some human contribution. However, Scafetta thinks that, at least 50% of the warming since 1950 is natural. Figure 5 shows Scafetta’s final semi-empirical model in blue, Moberg’s reconstruction in pink, and HadCRUT4 in red. 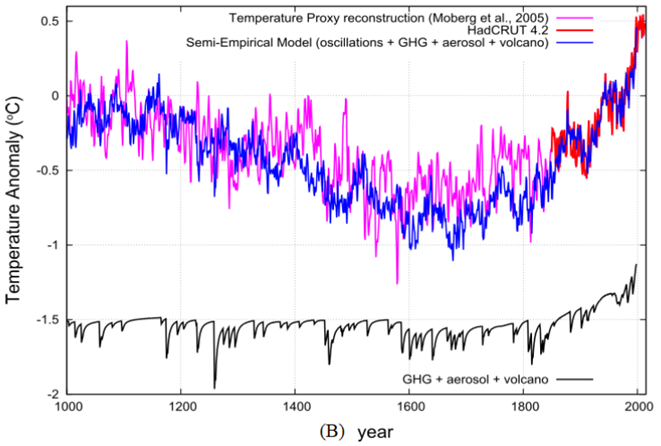 Figure 5.Scafetta’s model in blue, Moberg’s reconstruction in pink, HadCRUT4 in red and the CMIP5 extension (greenhouse gases, aerosols, and volcanic eruptions) in black. The black curve is moved downward for clarity.

In general, Scafetta’s model shows us that the CMIP5 models are missing important climatic “forcings” or mechanisms. The smooth nature of the CMIP5 ensemble mean suggests that the CMIP5 models are not modeling the short-term climate oscillations and the mismatch with the Medieval Warm Period shows they are not modelling the longer-term oscillations either. Basically, CMIP5 is ignoring nature.

Nothing really has changed since the time of Guy Callendar or the second IPCC report, called “SAR.” The original draft of SAR Chapter 8, which was changed from the original, by politicians, contained the following statement:

“we have no yardstick against which to measure the manmade effect. If long-range natural variability cannot be established, then we are back with the critique of Callendar in 1938, and we are no better off than Wigley in 1990.” (Lewin, 2017, p. 277)

Guy Callendar was the first to use empirical data to compute the temperature effect of adding CO2 to the atmosphere. One of the major criticisms of his work was how did he know? If you don’t know the natural climate variability, how can you compute the impact of CO2? This was also the criticism that Tom Wigley faced when he was working on similar calculations for the chapter on the detection of the greenhouse effect for the first IPCC report, “FAR,” in 1990. The criticism is still valid today.