Abrupt changes in ocean currents – and not greenhouse gases – were responsible for sudden warming of the Arctic and for sudden cooling in the Antarctic at different times in the past, according to two recent research studies. The Antarctic cooling marked the genesis of the now massive Antarctic ice sheet. 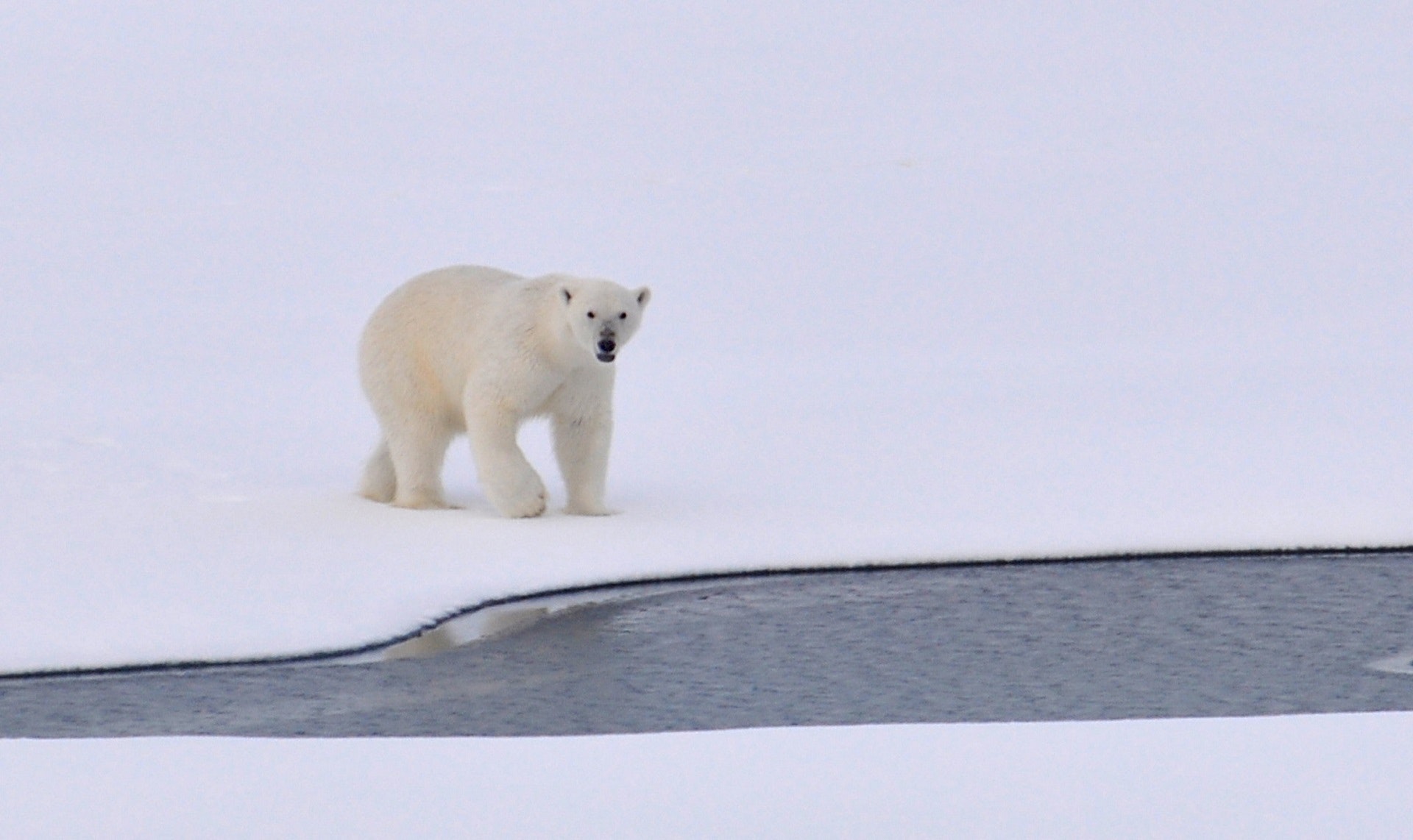 The first study, by a team of European scientists, discovered that the expansion of warm Atlantic Ocean water flowing into the Arctic caused sea surface temperatures in the Fram Strait east of Greenland to rise by about 2 degrees Celsius (3.6 degrees Fahrenheit) as early as 1900. The phenomenon, known as “Atlantification” of the Arctic, is important because it precedes instrumental measurements of the effect by several decades and is not simulated by computer climate models.

The conclusion is based on an 800-year reconstruction of Atlantification along the Fram Strait, which separates Atlantic waters from the Arctic Ocean. The researchers used marine sediment cores as what they call a “natural archive” of past climate variability, deriving the chronological record from radionuclide dating.

Shown in the figure below is the sea surface temperature and Arctic sea ice extent from 1200 to 2000. The blue curve represents the reconstructed mean summer temperature (in degrees Celsius) of Atlantic waters in the eastern Fram strait, while the red curve indicates the April retreat (in kilometers) of the sea ice edge toward the Arctic. You can see clearly that the seawater temperature increased abruptly around 1900, after centuries of remaining constant, and that sea ice began to retreat at the same time, after at least a century of extending about 200 kilometers farther into the strait. 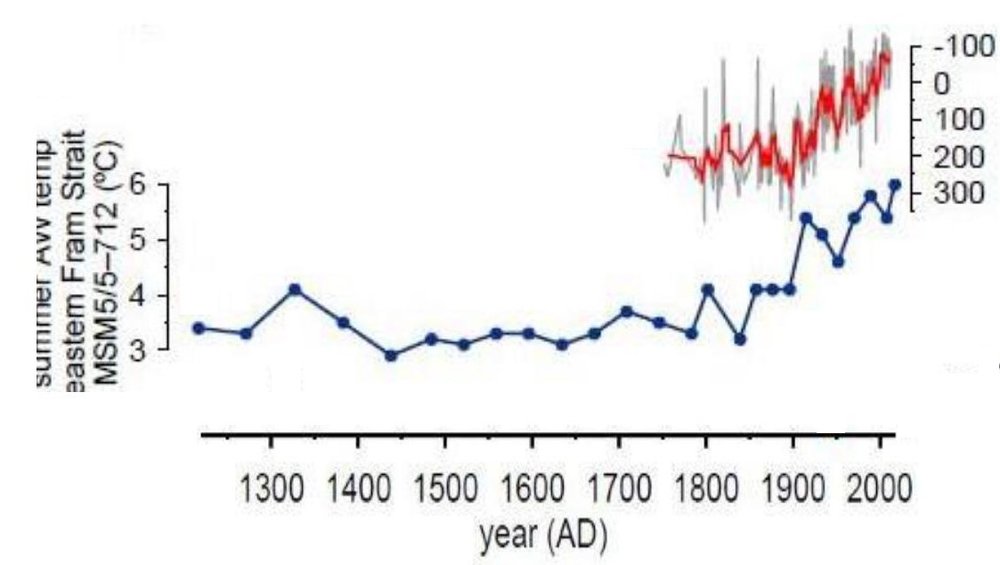 Along with temperature, the salinity of Atlantic waters in the strait suddenly increased also. The researchers suggest that this Atlantification phenomenon could have been due to weakening of two ocean currents – the AMOC (Atlantic Meridional Overturning Circulation) and the SPG (Subpolar Gyre), a circular current south of Greenland – at the end of the Little Ice Age. The AMOC forms part of the ocean conveyor belt that redistributes seawater and heat around the globe.

This abrupt change in ocean currents is thought to have redistributed nutrients, heat and salt in the northeast Atlantic, say the study authors, but is unlikely to be associated with greenhouse gases. The change caused subtropical Atlantic waters to flow northward through the Fram Strait, as illustrated schematically in the figure below; the halocline is the subsurface layer in which salinity changes sharply from low (at the surface) to high. The WSC (West Spitsbergen Current) carries heat and salt to the Arctic and keeps the eastern Fram Strait ice-free.

Sudden cooling occurred in the Antarctic but millions of years earlier, a second study has found. Approximately 34 million years ago, a major reorganization of ocean currents in the Southern Ocean resulted in Antarctic seawater temperatures abruptly falling by as much as 5 degrees Celsius (9 degrees Fahrenheit). The temperature drop initiated growth of the Antarctic ice sheet, at the same time that the earth underwent a drastic transition from warm Greenhouse to cold Icehouse conditions.

This dramatic cooling was caused by tectonic events that opened up two underwater gateways around Antarctica, the international team of researchers says. The gateways are the Tasmanian Gateway, formerly a land bridge between Antarctica and Tasmania, and Drake Passage, once a land bridge from Antarctica to South America. The scientists studied the effect of tectonics using a high-resolution ocean model that includes details such as ocean eddies and small-scale seafloor roughness.

After tectonic forces caused the two land bridges to submerge, the present-day ACC (Antarctic Circumpolar Current) began to flow. This circumpolar current, although initially less strong than today, acted to weaken the flow of warm waters to the Antarctic coast. As the two gateways slowly deepened, the warm-water flow weakened even further, causing the relatively sudden cooling event.

Little cooling occurred before one or both gateways subsided to a depth of more than 300 meters (1,000 feet). After the second gateway had subsided from 300 meters (1,000 feet) to 600 meters (2,000 feet), surface waters along the entire Antarctic coast cooled by 2 to 3.5 degrees Celsius (3.6 to 6.3 degrees Fahrenheit). And once the second gateway had subsided below 600 meters (2,000 feet), the temperature of Antarctic coastal waters decreased another 0.5 to 2 degrees Celsius (0.9 to 3.6 degrees Fahrenheit). The next figure depicts the gradual opening of the two gateways. 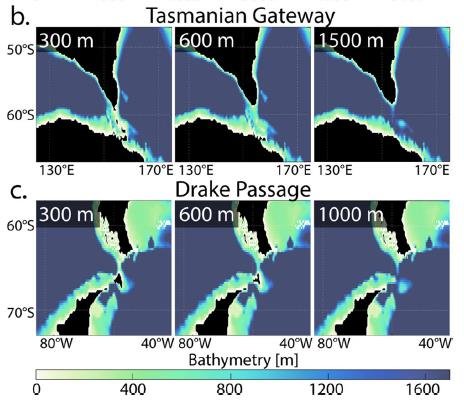 Although declining CO2 levels in the atmosphere may have played a minor role, the study authors conclude that undersea tectonic changes were the key factor in altering Southern Ocean currents and in creating our modern-day Icehouse world.