The Imaginary Climate Crisis: How can we Change the Message? A talk by Richard Lindzen 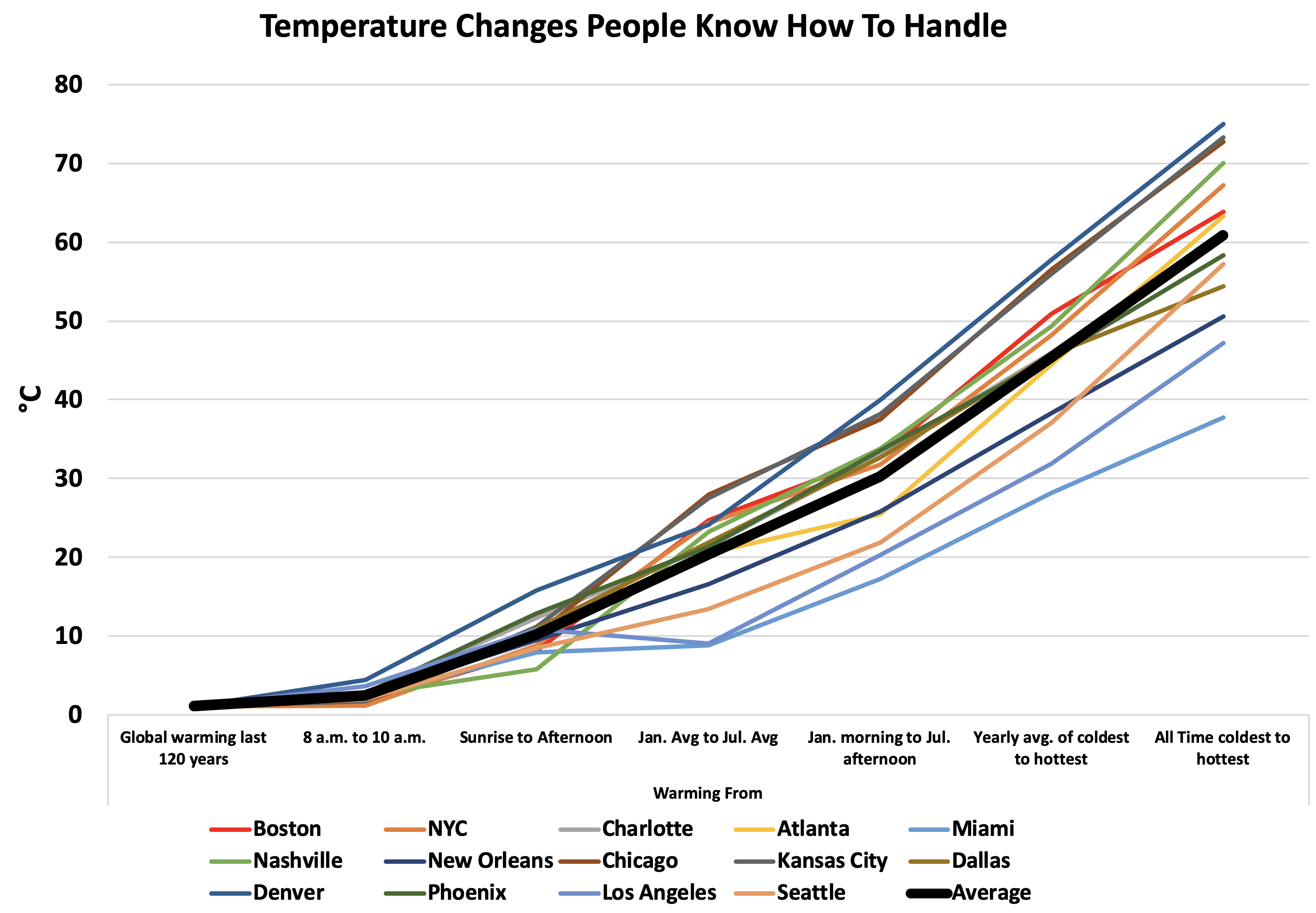 The Irish Climate Science Forum (ICSF) in cooperation with CLINTEL hosted a lecture by the world-renowned climate scientist Richard Lindzen. The online lecture was attended by around 200 people from around the world (including a group of climate activists who disturbed the talk. The recorded talk can be viewed here.

Professor Lindzen kindly agreed that his written speech could be posted here at CLINTEL. It follows below.

For about 33 years, many of us have been battling against climate hysteria. We have correctly noted

The exaggerated sensitivity,
The role of other processes and natural internal variability,
The inconsistency with the paleoclimate record,
The absence of evidence for increased extremes, hurricanes, etc. and so on.

We have also pointed out the very real benefits of CO2 and even of modest warming. And, as concerns government policies, we have been pretty ineffective. Indeed our efforts have done little other than to show (incorrectly) that we take the threat scenario seriously. In this talk, I want to make a tentative analysis of our failure.

In punching away at the clear shortcomings of the narrative of climate alarm, we have, perhaps, missed the most serious shortcoming: namely, that the whole narrative is pretty absurd. Of course, many people (though by no means all) have great difficulty entertaining this possibility. They can’t believe that something so absurd could gain such universal acceptance. Consider the following situation. Your physician declares that your complete physical will consist in simply taking your temperature. This would immediately suggest something wrong with your physician. He further claims that if your temperature is 37.3C rather than between 36.1C and 37.2C you must be put on life support. Now you know he is certifiably insane. The same situation for climate (a comparably complex system with a much more poorly defined index, globally averaged temperature anomaly) is considered ‘settled science.’

In case you are wondering why this index is remarkably poor. I suspect that many people believe that there is an instrument that measures the Earth’s temperature. As most of you know, that is not how the record was obtained.

Obviously, the concept of an average surface temperature is meaningless. One can’t very well average the Dead Sea with Mt. Everest. Instead, one takes 30 year annual or seasonal means at each station and averages the deviations from these averages. The results are referred to as annual or seasonal mean anomalies. In the following figures, we see the station data in black and the mean anomalies in orange. The spread of anomalies is much larger than the rather small range of change seen in the average. While the average does show a trend, most of the time there are almost as many stations cooling as there are stations warming. The figure you are familiar with omits the data points, expands the scale by about an order of magnitude (and usually smooths the curve as well). The total change in the mean is much smaller than what we experience over a day, a week or over any longer period. This is illustrated in the fourth figure. The residue we refer to as the index is pretty negligible. It may not even be a good measure of climate at all. Instead of emphasizing this, we look for problems at individual stations. This, I would suggest, is somewhat myopic. 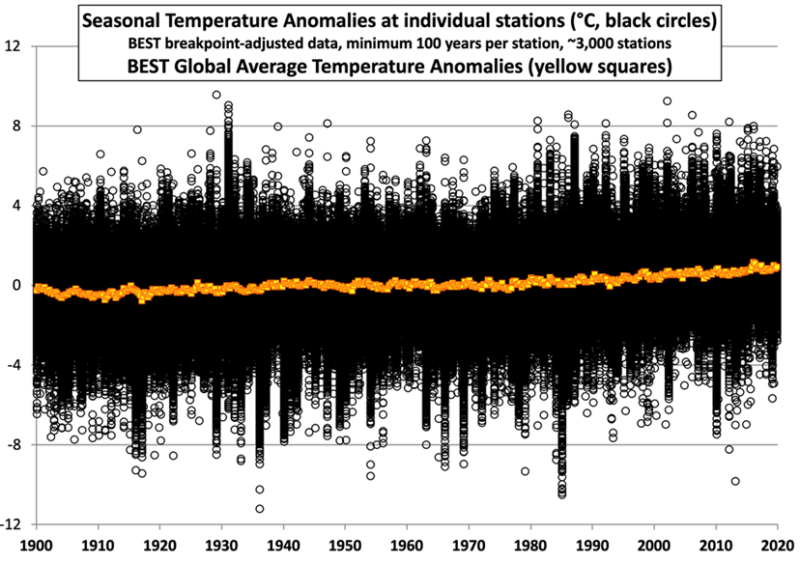 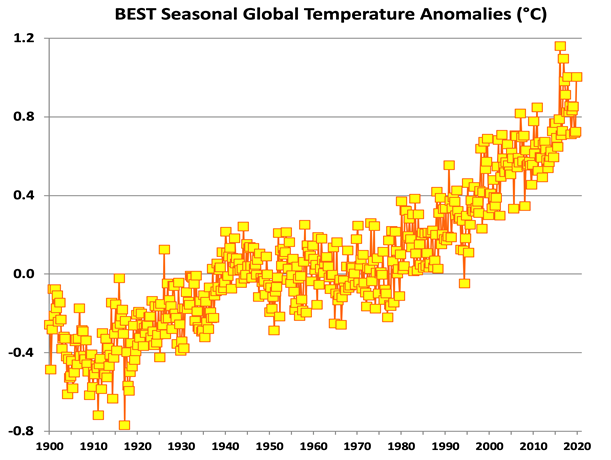 The fluctuations show why changes of +/- 0.2 are meaningless. 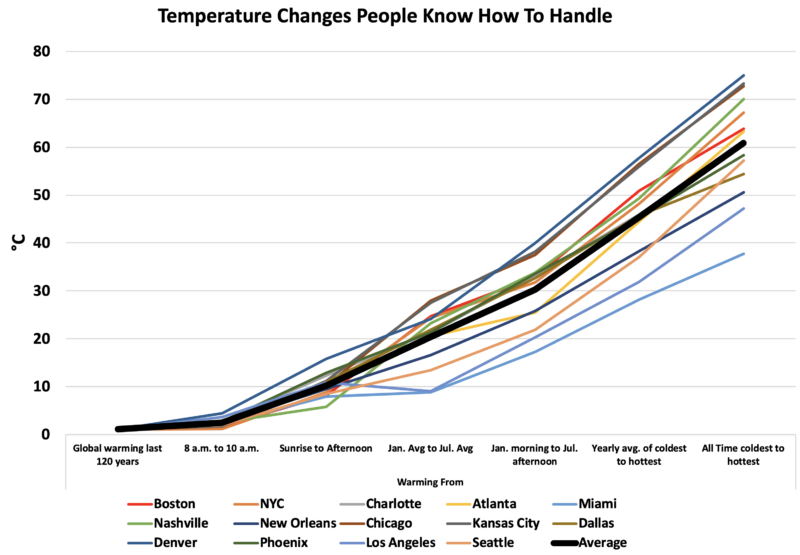 The thickness of the black line represents the total change in global mean anomaly over the past 120 years. Although this change was accompanied by the greatest increase in human welfare in history, we are told that its increase by about 30% will represent doom.

If this weren’t silly enough, we are bombarded with claims that the impacts of this climate change include such things as obesity and the Syrian civil war. The claims of impacts are then circularly claimed to be overwhelming evidence of dangerous climate change. It doesn’t matter that most of these claims are wrong and/or irrelevant. It doesn’t matter that none of these claims can be related to CO2 except via model projections. In almost all cases, even the model projections are non-existent. Somehow, the sheer volume of misinformation seems to overwhelm us. In case, you retain any skepticism, there is John Kerry’s claim that climate (unlike physics and chemistry) is simple enough for any child to understand. Presumably, if you can’t see the existential danger of CO2, you’re a stupid denier.

And, in case this situation isn’t sufficiently bizarre, there is the governmental response. It is entirely analogous to a situation that a colleague, Bruce Everett, described. After your physical, your physician tells you that you may have a fatal disease. He’s not really sure, but he proposes a treatment that will be expensive and painful while offering no prospect of preventing the disease. When you ask why you would ever agree to such a thing, he says he just feels obligated to “do something”. That is precisely what the Paris Accord amounts to. However, the ‘something’ also gives governments the power to control the energy sector and this is something many governments cannot resist. Information is unlikely to change this despite the fact that even the UN’s IPCC acknowledges that their warming claims would only reduce the immensely expanded GDP by about 2-3% by the end of the century – something that is trivially manageable and hardly ‘existential.’

Feeblemindedness
In trying to understand the success of this claim that climate change due to CO2 is an existential threat, I propose to look at an analogous scare: the widespread fear in the US in the early 20th Century of an epidemic of feeblemindedness. I will also return to C.P. Snow’s two-culture description in order to see why the alarmist scenario appeals primarily to the so-called educated elite rather than to the common people.

Over twenty five years ago, I wrote a paper comparing the panic in the US in the early 1920’s over an alleged epidemic of feeblemindedness with the current fear of cataclysmic climate change. ((1996) Science and politics: global warming and eugenics. in Risks, Costs, and Lives Saved, R. Hahn, editor, Oxford University Press, New York, 267pp (Chapter 5, 85-103))

During this early period, the counterpart of Environmentalism was Eugenics. Instead of climate physics as the underlying science, we had genetics. And instead of overturning the energy economy, we had immigration restriction. Both advocacy movements were characteristically concerned with purity: environmentalism with the purity of the environment, eugenics with the purity of the gene pool. Interestingly, Eugenics did not start with a focus on genes. It was started around 1880 by biometricians who used statistical analysis to study human evolution. Among them were some of the founders of modern statistics like Pearson and Fisher. Given the mathematically sophisticated origin of the movement, it should come as no surprise that it didn’t really catch on. It only became popular and fashionable when Mendelian genetics was rediscovered around 1900, and things like feeble mindedness were suggested to be associated with a single recessive gene. It is pretty clear that such movements need an easily understood, allegedly scientific but actually pretty absurd narrative. The people needing such narratives are not the ordinary citizen, but rather our educated elites. Prominent supporters of eugenics included Theodore Roosevelt, Margaret Sanger, the racist founder of Planned Parenthood, the Bishop of Ripon, George Bernard Shaw, Havelock Ellis, and many others. The supporters also included technically adept individuals who were not expert in genetics. Alexander Graham Bell for example. They also need a policy goal. In the early 1920’s, Americans became concerned with immigration, and it was argued that America was threatened with an epidemic of feeblemindedness due allegedly to immigrants from Eastern and Southern Europe.

Details of this situation are in my paper which you can request by email. The major takeaway points are the following:

In the case of eugenics, government funding was not at issue, but private funding did play a role, and for many scientists, there was the public recognition of their relevance.

For example, Jennings, a professor of genetics at Johns Hopkins University, in his 1930 book, The Biological Basis of Human Nature states: “Gone are the days when the biologist … used to be pictured in the public prints as an absurd creature, his pockets bulging with snakes and newts. … The world … is to be operated on scientific principles. The conduct of life and society are to be based, as they should be, on sound biological maxims! … Biology has become popular!” Privately, Jennings opposed the political exploitation of genetics.

Educated elite
C.P. Snow’s discussion in 1959 of the two cultures suggests why it is the educated elite that is most vulnerable to the absurd narrative. Snow was an English physicist, novelist, government advisor.

Here is his description of the non-scientific educated elite.

A good many times I have been present at gatherings of people who, by the standards of the traditional culture, are thought highly educated and who have with considerable gusto been expressing their incredulity at the illiteracy of scientists.

Once or twice I have been provoked and have asked the company how many of them could describe the Second Law of Thermodynamics. The response was cold: it was also negative. Yet I was asking something which is the scientific equivalent of: Have you read a work of Shakespeare’s?

I now believe that if I had asked an even simpler question – such as, What do you mean by mass, or acceleration, which is the scientific equivalent of saying, Can you read? – not more than one in ten of the highly educated would have felt that I was speaking the same language. So the great edifice of modern

physics goes up, and the majority of the cleverest people in the western world have about as much insight into it as their Neolithic ancestors would have had.

What C.P. Snow failed to note, I think, is that the group he describes is actually aware of their scientific ignorance, and this leaves them very insecure. This accounts for their need for simple narratives, however wrong. It allows them to believe that they actually do ‘understand’ the science, and, as we see, they become arrogantly proud of their alleged accomplishment. Of course, they forget that their ignorance extends to understanding what science actually is. They forget that the opposite of Science is ‘The Science’. The situation is compounded when one comes to climate where most scientists are also ignorant, but where their support for the narrative comforts the non-scientists. On top of all this, I suspect that in a long period of wellbeing, this elite feels the need to show that they too have met challenges – even if the challenges are purely imaginary. This seems particularly true for young people who are confronted with stories of the courage of the ‘greatest generation’.

One should note again that most ordinary people don’t have these problems.

Our task is to show the relevant people the overall stupidity of this issue rather than punching away at details. In focusing on the details, we are merely trying to showcase our own specialties. My use of the word ‘merely’ is probably unjustified; the details can, in fact, be scientifically important. However, we are not considering either our target audience or the intrinsic absurdity of the issue. It is likely that we have to capitalize on the insecurity of the educated elite and make them look silly instead of superior and virtuous. We must remember that they are impervious to real science unless it is reduced to their level. When it is reduced to their level, it is imperative that we, at least, retain veracity. Whether we are capable of effectively doing this is an open question.