I live in Texas and write about climate science and energy, so I get a lot of questions about the recent problems. My wife and I are OK, we have a natural gas powered generator and did not lose power like most people did earlier this week. We also had a broken pipe, but it was outside the house, and I was eventually able to cap it, with the help of a neighbor, after the normal (for me) three trips to the hardware store and two failed attempts.

As usual these days, discussions of natural events quickly devolve into useless political arguments about who or what is to blame. Little thought is put into the technical or scientific issues, instead everything is viewed through the prism of Democrat or Republican political agendas. Ideology trumps common sense. Thus, we have Democrats blaming natural gas shortages and coal downtime and Republicans blaming the wind power collapse. What really happened?

The Chronology
Texas is a big place; it is 862 miles (1,387 km) wide and 23% larger in area than France. The weather varies a lot from Northwest Texas where the wind turbines are to Austin, San Antonio, and Houston where some of the worse problems were. So, let’s look at the data, in Figure 1 we see electricity generation from February 7 through Thursday February 18. 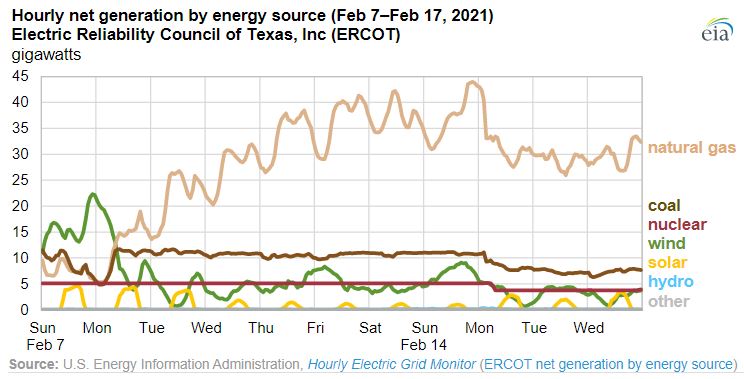 Figure 2 shows some of the critical weather statistics for Midland, Texas, near the West Texas wind turbine country. What isn’t shown is the humidity. The sudden drop in temperature began Tuesday, Feb 8, and humidity quickly rose to 100%. No measurable precipitation occurred between February 8 and February 13, but condensation froze onto the wind turbine blades. The condensation generally concentrated on the leading edge of the blades, which direct the wind around the blade and produce the spin and the power. The ice on the blades, especially the ice on the leading edge, caused the blades to stop spinning.

As Elliot Hough, an engineer, put it:

“the turbine blades and more importantly, the leading edge that directs airflow around the blade to create lift, will cover with ice and eventually lose all lift. In the case of a turbine blade, that means the turbine stops turning. In the case of an airplane, the airplane falls to the ground. If air is well below freezing point, there is little to no moisture in the air and blades won’t freeze over. Such are the conditions much further north in North Dakota where temps can be sub-zero F and turbines don’t ice over.” Elliot Hough on Linkedin

When these conditions occur on airplanes about to take off, the wings are de-iced with a chemical that melts the ice and stays on the wings long enough for the plane to reach an altitude where the humidity is low enough that no ice will form. But wind turbines are on the ground and if the humidity stays very high, as it did in West Texas for three days, and the temperatures continue to drop, they fail.

As the wind turbines froze, natural gas combined cycle backup generators kicked in. These were all over the state. Natural gas generation is normally a very good backup. It is flexible and can increase or decrease its generation on demand, nearly instantly, unlike coal or nuclear. These latter two sources have lots of fuel on site and are normally safe from disruption, but they are slow to change their output. Thus, they are considered “base load” sources of power. Natural gas is very flexible, but since its fuel is delivered by pipeline, on demand, it is vulnerable to supply disruptions. The Texas weather was bad enough that even some nuclear and coal generation was affected on February 15th, the coldest day.

As Figure 1 shows, natural gas ramped up to make up the loss of wind, in fact it increased 450%, as shown in Figure 3 from the Wall Street Journal on Feb. 17.

Figure 3. Change in power output from January 18 to February 17 in Texas. From the Wall Street Journal Feb. 17.

So, the sequence of events was, wind turbines iced up from February 8 to 10 and their power output dropped 93%. Natural gas ramped up quickly to cover the shortfall, increasing an incredible 450%, but the pipelines feeding them fuel iced up, especially the valves on the pipelines and put the natural gas generators out of commission. [Update: As Marc notes in the comments, this is an oversimplification of what happened. Also see this article in the San Angelo Live for more details.]

Conclusions
The proximate cause for the Texas grid collapse was the very cold weather from February 9 to 17. The initial problem was that wind was producing over 25% of Texas’ power and it is intermittent. Knowing it was intermittent, ERCOT ramped up natural gas generation as an instantaneous backup for the wind, but they forgot that natural gas is supply-on-demand, and the pipelines are vulnerable to disasters, especially cold weather. Disaster power sources are coal and nuclear, they have fuel on site for days or weeks and do not require a pipeline or a backup.

Policy implications
Texas has encouraged the building of wind turbines. They do this, in concert with the U.S. government, through direct subsidies and by paying for wind generation, rather than paying for electricity purchased. This guarantee of revenue means generating companies do not have to consider market demand, they can build wind turbines endlessly with no risk. They can even pay others to take their power and then be reimbursed by the government with our tax dollars! Since 2006, federal and Texas subsidies to wind power, have totaled $80 billion, this foolishness is explained well on the stopthesethings website.

The wind power excess capacity has distorted the generation mix in Texas to a dangerous and unbalanced level. Natural gas, coal and nuclear generating companies have too little revenue to increase or fortify their plants, since wind can generate as much as it wants and is guaranteed revenue for the electricity it generates.

The subsidies and mandates must be stopped and our baseload (aka emergency) capacity increased and fortified. Coal and nuclear power generation must increase. It should be clear to everyone now that, while natural gas is a perfect minute-by-minute grid stabilizer, since it is an on-demand electricity generator, it is vulnerable to weather disruptions. Texas’ current emergency baseload capacity is too small and too vulnerable.

Politics has thoroughly corrupted climate science as I explain in my new book: Politics and Climate Science: A History. The thoroughly corrupt field of climate science politics is now corrupting the fields of engineering involved in power generation. This is dangerous, engineers must make engineering decisions, not politicians. Reliable electricity is essential to our prosperity and well-being, our various governments should not be purposely destabilizing our electrical grid with dumb renewable policies, they should be strengthening the grid to make Texas more resilient.