Cold snaps can be deadly. A 2014 National Health Statistics report found, “During 2006–2010, about 2,000 U.S. residents died each year from weather-related deaths; 63% were attributed to exposure to natural cold. The recent cold snap in Texas and Germany highlighted our energy system’s vulnerabilities. During times of our greatest need, inadequate natural gas supplies, frozen wind turbines and snow-covered solar panels, left too many shivering in the dark. Why were we unprepared for such cold when the northern hemisphere had been experiencing a winter cooling trend since 1990? Were government officials too gullible, lulled by narratives that global warming would make snow disappear and cold snaps less likely?

After every deadly cold snap, defenders of CO2-driven-climate-change repeat the same unbelievable narrative “increased warming causes more cold”. Their argument is based on a sliver of truth regards the polar vortex’s influence on cold air. In the winter without sunlight, polar air cools much faster than the lower latitude air. The stark temperature contrast between cold and warm air intensifies the polar jet stream which defines the vortex’s boundary. The sliver of truth is intruding warmth can indeed weaken the vortex

The vortex was heavily studied in the 1990s due to concerns about ozone holes. Although typically ignored by the media, increasing CO2 both warms the lower atmosphere (troposphere) and cools the stratosphere. Climate models all predicted the vortex would strengthen because greenhouse gases would enhance stratospheric cooling by 5–7°C during December and January by 2019. Because ozone depletion requires extreme cold, it was feared increasing CO2 would enhance the ozone holes. Furthermore, climate scientists argued a warming troposphere and a cooling stratosphere was the undeniable “human fingerprint” of CO2 caused climate change. But their science was woefully incomplete. Stratospheric warming increased, the 2019 ozone hole was smallest on record and the vortex weakened despite CO2-caused cooling.

High in the stratosphere, the boundary of the vortex is symmetrical simply based on the contrast between colder and warmer latitudes. However, near the surface, mountains and land-sea temperature contrasts naturally cause the jet stream to be wavy. The Pacific high-pressure system and USA’s western mountain ranges cause the jet stream to veer northward, pulling warm subtropical air north over North America’s west coast. Moving eastward the jet stream then plunges southward driving extreme cold into the USA east of the Rocky Mountains. This natural undulation likely explains the “warming hole” in southeastern USA where temperatures have not warmed for over a century. Over 36% of the long-term USA weather stations, concentrated mostly in the eastern USA, experienced 70-year cooling trends despite urban heat island affects. 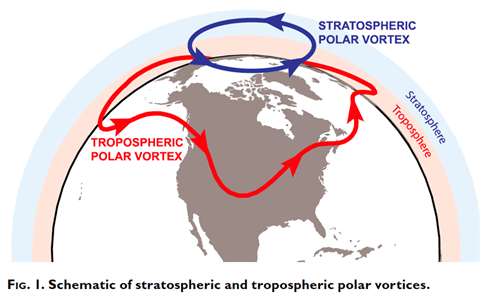 Some climate scientists argue CO2 induced “Arctic Amplification” causing warmer polar temperatures which increases the jet stream’s waviness. However, there is no consensus for their hypothesis, and some argue there is little evidence at all for that effect. Nonetheless there is an excellent, albeit ignored, explanation for the warming Arctic/cooling mid-latitudes paradox. The natural quasi-permanent Aleutian Low nearly explains it all, with similar dynamics in the north Atlantic.

The Arctic Ocean radiates away more heat (~100 watts/m2) than it absorbs from sun and greenhouse effects combined. (human-added CO2 offsets less than 2 watts/m2) It’s the inflow of warm ocean water that determines if the Arctic ocean cools or warms. Like the stratospheric vortex, the Aleutian Low forms every year as the northern hemisphere cools, but its position and strength vary due to natural El Nino cycles, the Pacific Decadal Oscillation and the Arctic Oscillation. When the Aleutian Low is positioned over the Bering Sea it drives warm southern air and warm storms further northward. That dynamic also raises sea level south of the Bering Strait, increasing warm water flows through the strait. Increased warm water flows melt more sea ice and triggers Arctic Amplification and higher temperatures. 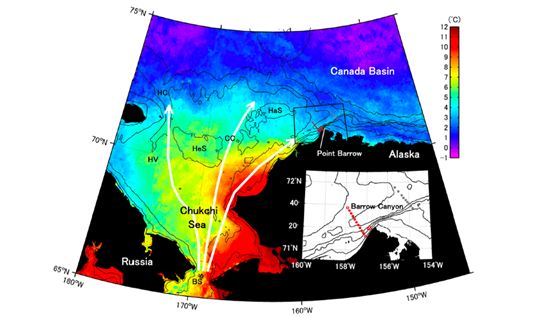 Simultaneously, when the Aleutian Low is positioned over the Bering Sea its strength increases, intensifying upward motions of relatively warm air into the stratosphere. It’s that warmth that weakens the polar vortex and unleashes the cold Arctic air. When natural weather re-positions the Aleutian Low over the Gulf of Alaska, wind direction changes, blowing water away from the Bering Strait. That reduces warm water flows into the Arctic. The Aleutian Low also weakens reducing upward atmospheric motion, allowing the vortex to strengthen.

Clearly energy policy must be better prepared to deal with natural climate change and its periodic extreme cold.