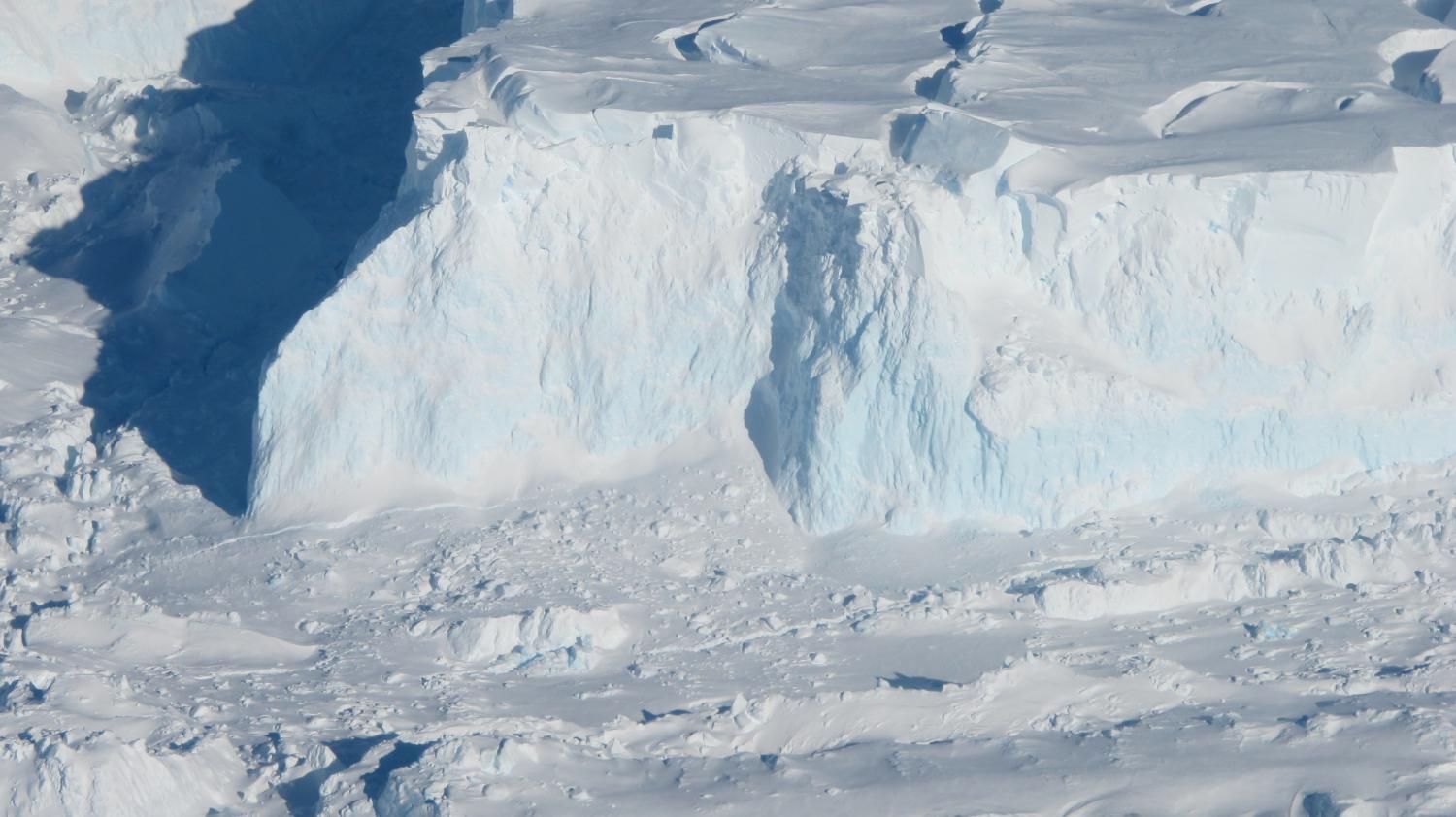 In 2016, a headline grabbing study said that the Antarctic ice sheet is much more unstable than was estimated untill then.  As a consequence, projected sea level rise in 2100 would double. Computer modellers from Deltares and KNMI scrambled back to their drawing boards to upgrade their prognoses for the Dutch coastline. Have these prognoses survived the climate news cycle?

Rarely has a scientific publication, whose authors said that the results ‘should not be considerend actual predictions’, had such a profound impact outside science. In 2016 David Pollard and Robert de Conto published in Nature their simulations for the collapse of the West-Antarctic ice sheet.

To do that, they invented a new mechanism for ice calving, the Marine Ice Cliff Instability (MICI). The basic idea is simple: a vertical ice cliff that is more than 90 metres high cannot carry its own weight and will collapse, or calve. If the calved ice drifts off into the sea, what remains is again a vertical cliff which will also calve, etcetera. This slabwise calving will only stop if the rim of the ice sheet on the sea bottom (the grounding line) is less than 800 metres below sea level. However, in large parts of the West Antarctic ice sheet the reverse is true: the depth of rock bottom increases when the ice sheet starts calving, so this becomes a runaway process. 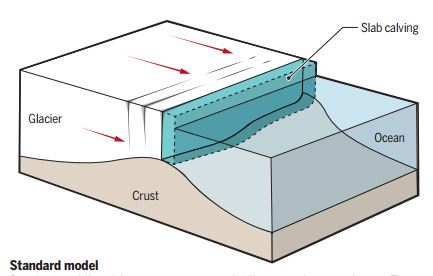 Calving of an ice sheet according to the theory of Marine Ice Cliff Instability
Driven by their own weight, ice sheets always slowly move out to sea (red arrows), where piecewise calving occurs. Usually, this loss of ice is in equilibrium with the gain of ice by snowfall on the ice sheet. As soon as an ice cliff towers more than 90 metres above sea level, it becomes unstable under its own weight and a slab of ice will calve off.  This ice drifts off, after which the new ice cliff is somewhat more inland, to the left. The grounding line, the outer rim of the ice sheet on the sea floor, also moves leeft. If the sea floor does not rise but descends going inland, like in parts of West Antarctica, the thickness of the ice above the grounding line increases, so the height of the cliff above sea level as well (because ice floats). This reinforces the instability, causing unstoppable, runaway calving.

Until then, model simulations had always predicted that it would take thousands of years for a substantial part of the Antarctic ice sheet to disintegrate and melt because of climate change. Although this type of catastrophic calving had never been observed on a real ice sheet, MICI enabled Pollard and DeConto’s model simulations to achive this in a matter of a few centuries. As a result, the prognosis for maximum sea level rise in 2100 was no longer the IPCC’s 82 centimeters, but one meter more, and fourteen meters additional sea level rise in 2500.

At the KNMI, people also read Nature, so on 9 May 2016, they chimed in with their own press release, which called the situation of Antarctica ‘disastrous’. Most media, including the tv news shows, bought into this and covered the story as such.

Deltares, the leading Dutch consultancy for water management, set itself the task of processing the consequences for the Dutch coast in detail, producing a lenghty report in September 2018. While previously, barely a metre of sea level rise was deemed possible by 2100, Deltares now took into account two metres of sea level rise if global warming was limited to 2 degrees Celsius (the Paris agreement), or possibly three metres without measures to curb global warming (IPCC-scenario RCP 8.5).

The ‘metres of sea level rise in 2100’-meme got lodged even more firmly in the Dutch collective memory in January 2020, when news website De Correspondent published a very alarmist pamphlet about this on its own website – author Rutger Bregman admitted that he was ‘scared shitless’. A print version of this pamphlet was made available free of charge by a donation from the Postcodeloterij (a national lottery), and hundreds of thousands of copies were distributed over the Netherlands.

One of the experts, geographer Maarten Kleinhans, is quoted in the article as saying that anyone who now chooses to have kids, puts people on this world who may not have a country left, because the Netherlands will then be largely submerged. Judged by the hundreds of replies to the article on De Correspondent, a sizable part of the audience believed this unconditionally. Basically, all this hinges on the paper by DeConto and Pollard in Nature.

How well has this publication from 2016 stood the test of ongoing scientific inquiry?

In June 2018, an international group of researchers  (Barletta e.a.) reported in Science  their GPS-measurements of the rock bottom underlying the West Antarctic ice sheet. The bottom was rising quickly in the parts  where most ice loss happened, up to 4 centimeters a year. Their model shows, that the crust under the ice sheet has very low stiffness, causing it to bounce back quickly when the burden of ice decreases. This constitutes a negative feedback on the purported, catastrophic calving in the MICI-model, for the rising sea bottom slows down the receding of the grounding line. If future warming follows the moderate IPCC-scenario’s, it would halt this receding, and even in the case of extreme warming (RCP 8.5), it would possibly prevent the collapse of the West Antarctic ice sheet (the East Antarctic ice sheet will not collapse anyhow). Although the authors called this result a game changer, it was almost completely ignored in regular climate reporting.

In february 2019, Nature published a re-analysis of the theoretical model used by DeConto and Pollard to make their prognoses. These researchers (Edwards e.a.) show, that a correct interpretation of the uncertainties in the model result in a much smaller contribution by the Antarctic ice sheet to global sea level rise: at most 45 centimeters instead of one metre.

Recent research now even undermines the MICI calving mechanism itself. Under the headline ‘Is the marine ice cliff hypothesis collapsing?’, Science announced a research article in their 18 June issue, in which Bassis e.a. introduce an  improved ice sheet model. The MICI calving mechanism by DeConto and Pollard is intuitive and simple, while for Bassis e.a., things are quite a bit more complicated but also more realistic. The bottom line is, that if a gletscher terminates in a high, vertical ice cliff, it will not calve in clean slabs, but will collapse via two different, simultaneous mechanisms. The result will be a sloping, non-vertical cliff, buttressed by debris of calved ice that help prevent further calving.

Catastrophic collapse of an ice sheet is still possible, but only if the height and slope of the gletscher and the underlying sea floor are within certain limits. 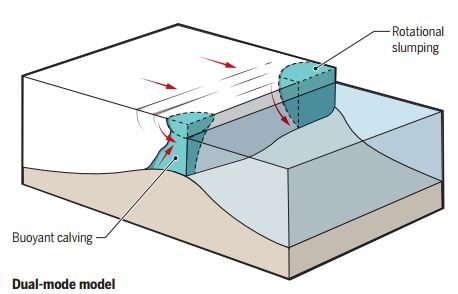 Calving according to the M-Ice model
In a more realistic model of an ice cliff, calving does not happen in the form of vertical slabs of ice detaching from the cliff. Simulations show, that ice calves in two different ways, which causes the cliff to become sloped and get stabilised. Also, the calved ice debris will usually exert a counter pressure on the cliff, which also helps to stabilize it.

Bassis e.a. apply this approach to the Thwaites glacier, the part of the West Antarctic ice sheet that, according to consensus glaciology, is closest to catastrophic collapse. They conclude, that the edge of the Thwaites glacier will retreat at a speed of a few kilometers per year, but is not in danger of rapid collapse.

As of now, mid July 2021, the KNMI website gives a prognosis for maximum sea level rise in 2100 of 1.1 metre, a mere 12 centimeters more than before all the hype about catastrophically collapsing ice sheets. Whether this extra metre of sea level rise from DeConto and Pollard has evaporated because of the later work of Barletta, Edwards or Bassis is anyone’s guess; in any case, KNMI keeps in line with the SROCC-report, the interim report about oceans and ice sheets by the IPCC that was released in september 2019.

Nevertheless, the extreme two to three metres of sea level rise in 2100 from the Deltares report is still reigning free in the public debate. This is a recurrent phenomenon in climate reporting: the most extreme prediction is readily accepted and promoted as the new normal, which can no longer be falsified by later research. And then, it is a matter of waiting for the next level extreme prediction that the media will promote to being the new normal.