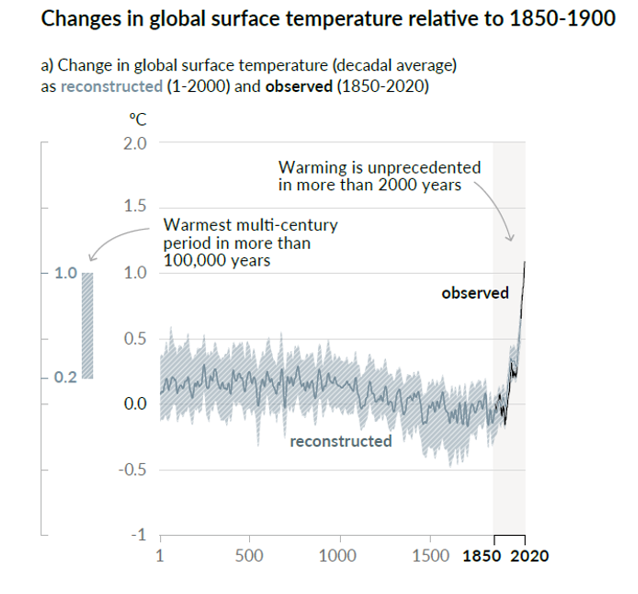 After 8 years the IPCC finally published a new Assessment Report, called AR6. The media went wild: climate change is going faster than ever; extremes are increasing; it has become close to impossible to stay under the 1.5 Celsius target and sea level rise is irreversible. And on and on and on…

A surprising new feature in the report is a brand new (or maybe we better say old) hockey stick graph, see the figure on top of this post. For one of us (Marcel Crok) this is a déjà vu: in 2005 Marcel was the first journalist who extensively wrote about the criticism of Stephen McIntyre and Ross McKitrick on the then (in)famous hockey stick of Michael Mann. That graph was brought very prominently in the third IPCC report in 2001. As insiders know the climategate emails (hacked in 2009 and put online) dealt with this ‘unfortunate’ episode of the climate debate. IPCC downplayed the importancy of the hockey stick somewhat in AR4 (2007) and AR5 (2013) but now the graph is back in full glory. Apparently it is important (for them) after all.

Given the huge importance of the IPCC report – it is regarded as the most important substantiation for climate policy – it is also important that we analyse it in detail. However, digging through 4000 pages and 14.000 scientific papers is close to impossible. Luckily, this isn’t necessary. Inside the CLINTEL network there is a lot of relevant expertise on specific topics, like the hockey stick, climate sensitivity, climate models, sea level rise, extremes, solar influence, scenarios etc.

Marcel Crok was interviewed by Flavio Pasquino of the popular Studio BLCKBX about the new IPCC-report. Interview in Dutch but English subtitles available.

With an international CLINTEL team we will analyse each of these relevant issues and write a chapter about it. The report is expected to be finished in a few weeks. Some researchers do this free of charge, but some are in a position (freelance) that makes some compensation necessary.

If you want to help this project with a donation, please go to this page. Please mention AR6 as a remark, then we know it is destined for this project.

Many thanks in advance for any help!