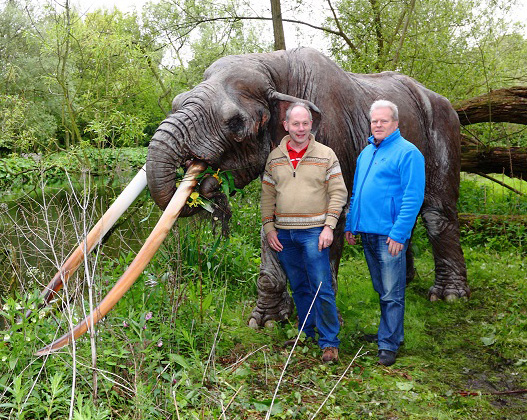 What is your background?
After highschool, I started studying physics at the University of Groningen. However, after two years, I was selected for pilot training for the Royal Netherlands Air Force.  On the Royal Military Academy my secondary study was physics, electronics. My flying career (NF-5, F16) was followed by national and NATO staff duties. During that that time I became interested in paleoclimatology and I’m autodidact, having read 1000+ paleoclimatological studies and textbooks.

Since when and why are you interested in climate change?
Since the airing of discovery channel’s “Raising the mammoth” in 1998. The discovery of a mammoth mummy in Northernmost Siberia, carbon dated during the Last Glacial Maximum hinted to an obvious contradiction with the scholar interpretation of paleoclimatological records. A challenge that begged for a solution and I was happy to sink in my teeth.

How did your views on climate change evolve?
Initially, the climate change hypothesis hinged heavily on assumptions about the Pleistocene ice ages, comparing ice core data and oceanic sediment core data. Initially there was little choice than to accept that general picture. However closer study exposed a plethora of problems akin the aforementioned mammoth, which were ignored by climate change scholars. The overall conclusion should be that there is no evidence whatsoever that carbon dioxide has controlled the climate during the Pleistocene ice ages. The mean eureka/aha moment occurred when comparing hydrographical variation of oxygen and hydrogen isotopes with ice core isotopes, revealing that those were not primary proxies for temperature but for humidity.

Is climate change a big issue in your country and how do you notice this?
Climate change is the major area of interest of the government required to enforce carbon dioxide emission reduction in accordance with the Paris agreement. MSM will not allow the voicing of dissent. In daily life the explosion of renewable energy sources (windfarms and solar panels) are dominant in the landscape.

How would climate policy ideally look like in your view?
There cannot be any climate policy, since there is no way to control climate. Environment and energy policies should focus on clean and environment friendly assets. The use of fossil fuels should not be discouraged since – apart from indifference to the climate – it gradually increases the total/global biomass (global greening).

What is your motivation to sign the CLINTEL World Climate Declaration?
The climate change hype is undermining key structures of the human society, especially energy affordability and security.  Our descendants will suffer from that inevitably, if we are unable to stop the hype.

What question did we forget?
The following question would have been interesting and likely, responders would be eager to elaborate: Is there any discrepancy between the scholar/IPCC climate image and reality in your own speciality/area of expertise and could you elaborate on that?
My answer: The main discrepancy of the late Pleistocene ice ages is the 100ky cycle, both found in the Antarctic ice cores and the oceanic foraminifera sediment cores. It can be proven that the predominant scholar climate interpretations are incorrect, which lead to the erratic carbon dioxide and global temperature correlation. A case could be made for a tectonic origin of the 100ky cycle.