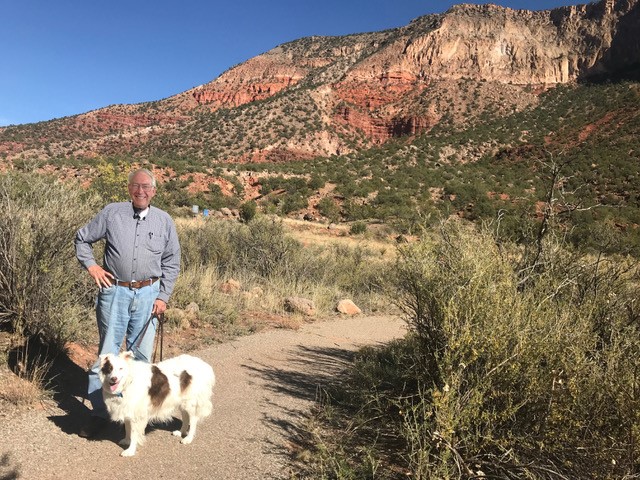 What is your background?
My degrees are all mechanical engineering, which serves as a spectacular springboard into almost any interest. My doctorate at Purdue was on modeling blood flow in the kidney and comparing my math model of this to experimental data I acquired at Indiana University Medical Center. I taught full-time at Purdue during my doctoral studies and after graduation joined the faculty at Louisiana State University. While there, I became affiliated with a research program in bioengineering at Carville Hospital, working with a world renown orthopaedic surgeon Dr. Paul Brand. He was the medical lead in our lab, and I was the engineering lead. We forged the first interactive graphics based hand model derived from CT scan data. This provided a realistic rendering in 3D for the hand, and the associated model predicted tendon motion for various joint angular changes to within 5% for the unloaded hand.
I also helped to found the Interactive Graphics lab at LSU with a replica of this lab at Carville Hospital. Our ability to collaborate and model physical systems was so enhanced that I and another colleague, John Brewer, obtained funding to network the entire LSU campus to support our teaching modeling and interactive graphics. At LSU, I began to teach a course on modeling and solution techniques for nonlinear systems and also taught an introductory course in computer graphics. The math modeling class eventually evolved into a textbook.
In 1993, I was nominated for and accepted the position of Department Chair of Mechanical Engineering at LSU. In 1999, I finally published a graduate level textbook on math modelling and analysis. It was entitled Design Analysis: Mathematical Modeling of Nonlinear Systems and published through Cambridge University Press. Chapter 7 includes an introduction to chaotic systems. During my 6 years, the department went from $600,000 annual research expenditures to $6-million/year. We also passed our accreditation review and hired several new faculty positions.
In 1999, I was nominated to become Dean of Engineering at the University of Idaho. Again, this was a growth period for the College and we similarly doubled research productivity and passed our accreditation review. At each institution, I continued to teach my graduate course in math modeling and solution techniques.
I retired in 2007 from the University of Idaho, and my wife Margaret and I designed our current home in 2008.

Since when and why are you interested in climate change?
I’m not specifically interested in Climate Change, I am interested in truth, honesty and integrity, and professional behaviour. The current debacle over this topic is essentially because a few math modelers with a specific ideological bent decided to use math models to force their point of view. Those models were loaded with their bias, and they ignored some basic truths in so doing. They assumed some mathematical relationships that did not reflect how nature actually behaves. They ignored the variability of the Sun. They assumed that the culprit in their global warming ideology was CO2 introduced by mankind. They ignored the historical evidence of high levels of CO2 in the atmosphere when mankind wasn’t really an issue. They chose not to include all data in arriving at their “hockey stick” temperature-CO2 graph demonstrating global warming. And so on. But, more importantly, they also ignored the fact that the Earth’s Climate is a chaotic system. And that the Sun’s Climate is also chaotic. So, we have a chaotic Earth climate driven by a chaotic Solar climate. By the very definition of a chaotic system, it is obvious that no math model will ever be able to predict the future climate of the Earth. Just look at the climate during the Maunder Minimum to see how our climate can take a totally surprising and unpredictable turn. Considering all this, it is therefore patently obvious that these individuals were not men of integrity. They were fudging their data, using unproven theories, lying, and dissimilating to promote their ideology.
Knowing this, how could one not be urged to action to attempt to counter this crazy scheme.

How did your views on climate change evolve?
My views changed slowly as I began to read and comprehend the fallacies in the modelling, the laughable conclusions, and the weird environmental policies that were being accepted and hammered into law. I could only ponder how and why anyone of conscience could promote such garbage.

Is climate change a big issue in your country and how do you notice this?
Climate change is a huge issue in the United States, because corrupt politicians have seen this as a way to promote their own agendas and to make money from it.

How would climate policy ideally look like in your view?
All government policy should only be based on proven science. On facts, not feelings. For example, when the global temperatures began levelling off 20 years ago, and then held those values, they should have discarded the whole climate change agenda. They should have abandoned their “renewable energy” concepts. When energy costs in Europe doubled, they should have questioned the real science that was being used to justify the huge investments for no tangible result. When questions began to creep into the literature about how wind energy machines were unreliable, how their efficiencies dropped quickly, when their ROI began to look questionable, when engineers and scientists began to voice concerns that climate change wasn’t being driven by man-made CO2 …. politicians should have quickly grasped that this was a huge hoax. Of course, by this time they had spent trillions of dollars on encouraging scientists, engineers, and modellers to find that man-made global warming was fact without anyone being able to do so. Few such ego-driven people could alter their behaviour, and the public was stuck footing the bill. And we still are.

What question did we forget?
The whole question about where we go from here is a difficult one. It involves challenging both political parties hell-bent on achieving and retaining absolute power. It involves revision of educational policies that have warped our children, from elementary school through college. We have a problem with society being more convinced of their feelings while unable to discern the true facts. We have a corrupt press and media that is dedicated to promoting man-made global warming and deluging the public with untruths and unmitigated lies. We have spineless politicians who continue to uphold the deep state agendas. The media and these politicians have failed our people, our country, and even the world.
In the history of the world, religion has managed to keep mankind on an even keel and keep our morals and values in place. With the secularization of society worldwide, morality is now just a choice, not a God driven obligation. Belief in God is the bedrock of morality.
The situation of civilization is therefore currently very tenuous. It will take generations to unwind the damage to our nation and world. To me, the first step is to revitalize our faith in God and rebuild the moral values that have made our nation the leader of the world. Without that moral compass, all else fails. How else are we able to reverse the Feelings versus Facts mentality of society?