On July 15, 2022, Franco Bottaglia interviewed Guus Berkhout on the supposed climate crisis. This interview was published in La Verita on July ……., a daily newspaper in Italy.

Prof. Battaglia plays a leading role in the critical climate community of Italy and prof. Berkhout is president of CLINTEL. 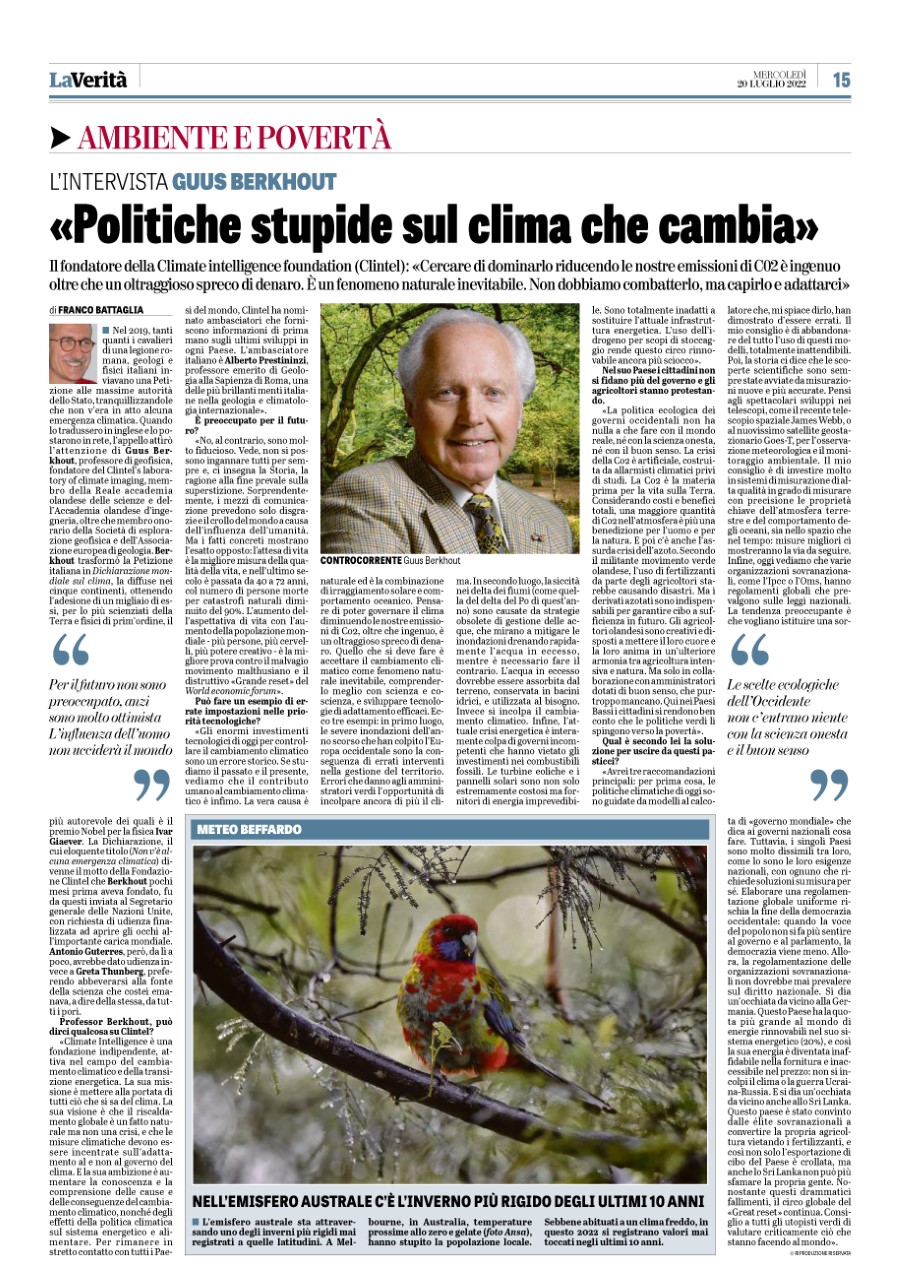 Ability of mankind to solve problems is beyond imagination

Q: Can you tell me something about CLINTEL?

A: Climate Intelligence (CLINTEL) is an independent foundation active in the field of climate change and energy transition. CLINTEL was initiated by emeritus professor of geophysics Guus Berkhout with the objective to make the many critical climate organizations around the world combine forces and work closely together against one-sided information and false conclusions promoted in the news media. CLINTEL was founded by Guus Berkhout and science journalist Marcel Crok (author of the book ‘The State of the Climate’) in March 2019.

The Clintel mission is: “Bringing Climate Knowledge to the World”. The “World” means mainstream climate scientists, green energy engineers, model-driven policy makers and (supra)national political leaders. In the coming year, the judiciary and the general public will receive extra attention from CLINTEL. Not only in The Netherlands and Europe, but worldwide. An important opportunity will be Clintel’s presence in the forthcoming high-profile Shell lawsuit.

CLINTEL’s climate vision can be simply summarized by: “There is no climate emergency”. We formulated the World Climate Declaration (WCD), a one-page summary of what scientific climate realists agree upon. In a few words, the WCD states that global warming is a fact but not a crisis, the cause of global warming has large natural components, more CO2 in the atmosphere is a blessing, and climate measures must be focused on adaptation. Currently, the WCD has been signed by more than thousand scientists and engineers. Both the Declaration and the list of signatories (arranged per country) can be found at www.clintel.org.

The ambition of CLINTEL is to generate and collect knowledge about, and understanding of, the causes and consequences of climate change as well as the effects of climate policy on the energy and food system, both determining the welfare and well-being of the world.

Signatories constitute a close network of climate and energy experts. It makes CLINTEL a strong organization with a wealth of operational knowledge. To keep in close contact with all countries around the world, CLINTEL has appointed ambassadors that provide firsthand information on the latest developments in each country.

Q: Considering your large international exposure as leader of CLINTEL, are you worried about the future?

A: No, I am very hopeful and let me explain why. In the past centuries, faith and superstition have been replaced by rational thinking (“Age of Enlightenment”). For instance, by rational thinking it became clear that extreme weather is not in the hands of mysterious gods but it is determined by a complex interplay of natural forces. Another example shows that, step by step, primitive medicine men became the qualified doctors of today. And, last but not least, enlightened thinkers initiated a continuous flow of great technological developments in all sectors of society. As a result, the quality of life has greatly improved.

Surprisingly, we only hear doom and gloom from the media. According to them, the world is collapsing due to the influence of man. But hard facts show the opposite. Did you know that (i) in the past 100 years the number of people on our planet increased from 1.9 billion in 1922 to 7.9 billion in 2022, while global life expectation increased from 40 to 73 years, (ii) the number of people who died by natural catastrophes decreased by more than 90%, and (iii) there were never so many people taking care of the natural environment, etc., etc. What a hopeful perspective!

However, if we stop thinking rationally, if we stop with investing in truthful science and education, if we stop setting the right priorities in technological development, if we stop improving the agricultural productivity, then progress will stop. That is what I fight against.

Q: Can you give an example of setting wrong priorities in technology?

A: Today’s huge technological investments that try to stop climate change are a historical mistake. If we study the past and present, we see that the cause of climate change has large natural components, the combination of solar irradiation and oceanic behavior being by far the most important. Thinking that we can stop climate change by decreasing the CO2-concentration in the atmosphere is not only naive, but also an outrageous waste of money. The cost-benefit ratio is huge.

What must be done is: 1) accept climate change as an unavoidable natural phenomenon, 2) better understand the climate system with truthful science and 3) adapt to its continuous changes by developing effective adaptation technologies. To illustrate the importance of early adaptation, see three topical examples on floods, droughts and energy shortages:

Q: In your country citizens don’t trust the government anymore and farmers make an uproar. How could this happen?

A: The green policy of Western governments has nothing to do with the real world, nor with honest science, nor with common sense. The CO2-crisis is artificial, constructed by climate alarmists who, with their pitch-black scenarios, have Western governments and parliaments in their power. To formulate it nicely, Western administrators are naïve and do not (want to) realize how essential the role of CO2 is in nature. Bear in mind, climate change is much more than CO2, and CO2 is much more than climate change. Isn’t CO2 the raw material for all life on Earth? Looking at total costs and benefits, isn’t more CO2 in the atmosphere a blessing for mankind and nature? In the Netherlands citizens see that green policies are pushing them into poverty. Poor citizens. We see that the fake climate crisis is leading to a real economic crisis!

And then there is the fake nitrogen crisis. According to the militant Dutch green movement, the use of fertilizers by farmers is causing a NH3-disaster to adjacent heath areas. Poor farmers. Why should innovative agriculture make way for artificial nature on artificial pieces of poor land? Isn’t NH3 indispensable to ensure sufficient food in the future? Let us hope that the fake nitrogen crisis does not lead to a real food crisis!

Dutch farmers are inventive and are willing to put their heart and soul into further harmony between intensive agriculture and nature. But only in cooperation with administrators with common sense. And right they are.

Q: What is according to you the solution to stop the transition to darkness?

A: I have three principal recommendations:

My advice is to ban the use of politics-driven ‘scientific’ models all together. Those false models push us back into the dark times of superstition.

My advice is to heavily invest in high-quality observation systems that can accurately measure the complex properties of the Earth’s atmosphere, land surfaces and ocean behavior in both space and time. Better measurements will show us the way forward!

When the voice of the people no longer comes through in government and parliament, democracy fails. This means that regulation of undemocratic, unelected supranational organizations must NEVER overrule national law. In addition, to undo the enormous green damage, we urgently need in each Western country a national RECOVERY CABINET with a competent team of PROJECT-MINISTERS, who know the content of their portfolio inside out and who are not the playthings of supranational bodies, rigged advisory committees (who already know what the outcome is expected to be), commercial research firms (who think of a follow-up assignment while they are writing their proposal) and cunning lobbyists (who plunder the big subsidy pots).

In conclusion, false scientific models have given (supra)national organizations a license to experiment with the global energy and food system. As expected, the outcome is catastrophic. If you are not yet convinced, have a close look at Germany. This country has worldwide the largest share of renewables in its energy system (about 20%). As a result, its energy supply has become unreliable, and its energy prices have become unaffordable. Don’t blame the climate or the Ukraine-Russian war. In Germany, the fake climate crisis has caused a real energy crisis!

And have also a close look at Sri Lanka. This country was persuaded by the supranational elites to make its national agriculture system sustainable by banning its fertilizers and its traditional crop protection. As a result, not only did the country’s food exports collapse, but now Sri Lanka cannot feed its own people. In Sri Lanka, the fake sustainability crisis has caused a real food crisis.

Despite these dramatic realities, the global ‘Great Reset’ circus continues.  Every human activity must be NET ZERO:  Net zero CO2 (no fossil fuels for energy), net zero NH3 (no fertilizers for agriculture), and what is next …..CH4?  Germany and Sri Lanka give us convincing evidence of what we can expect on a global scale. I advise all green utopists to critically evaluate the great harm they are doing to the world.