William van Wijngaarden is a prominent scientist. He is a physicist at York University in Canada and also does research on climate. Jan van Friesland got in contact with him and discussed some underlying topics regarding climate and climate change.

We know CO2 absorbs radiation. Can you explain what is precisely CO2 absorption and why this absorption is responsible for warming the atmosphere?

It is important to first understand that all objects radiate energy known as Black Body Radiation, which increases very rapidly with the absolute temperature.  The absolute and Celsius temperatures are related by T(Kelvin) = T(C) + 273.  Hence, 0 C corresponds to 273 Kelvins.  This means that a hot object like the sun radiates orders of magnitude more energy than an object such as the Earth.  The energy is radiated across a spectrum of wavelengths.  For the sun with a surface temperature of about 6000 Kelvins, the peak radiation occurs at visible wavelengths.  For the Earth with an average surface temperature of 15 C or 288 K, the radiation is in the infrared and has maximum intensity close to the frequency (667 cm‑1 or 15 mm) where CO2 strongly absorbs.

The CO2 molecule is a linear molecule where an oxygen atom is on either side of the carbon atom.  When the CO2 absorbs infrared light at 667 cm-1, it vibrates such that it bends,  i.e. the Oxygen atoms flop up and down relative to the carbon atom.   In addition, the CO2 molecule like other atmospheric molecules such as O2, N2 etc. moves about at speeds of hundreds of meters per second.  Collisions occur very frequently resulting in internal energy of the molecule being transferred to translational motion.  Temperature can be thought of as a measure of the translational energy. 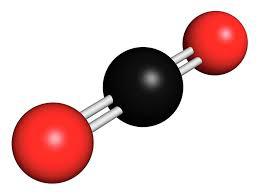 Why doesn’t CO2 absorb more and as a result causes very little warming?

The Earth’s atmosphere already has a lot of CO2 which causes the absorption at 667 cm-1 to be saturated.  Doubling CO2 from 400 to 800 ppm will increase the temperature by about 1 C.  Saturation means the temperature increase depends on the logarithm of the CO2 concentration change. To get an additional 1 C warming, CO2 would need to double again from 800 to 1600 ppm.  At the present rate of increase of 2 ppm/year, it would take about 2 centuries to double CO2 to 800 ppm.

How about the feedback of CO2 – water vapour? Mainstream models estimate a very high positive feedback. Is that exaggerated estimation not responsible for the catastrophic predictions about global warming?

Doubling CO2 is predicted to increase the surface temperature by nearly 1 C.  This amount is something that is quite well understood and we have confirmed it in our calculations.  Warmer air can contain more water vapor (something Chemists call the Clausius Clapeyron equation).  That is obvious because large amounts of precipitation occur only when it is hot and humid.  Similarly, large snowfalls occur when the temperature is near the freezing point, not when it is extremely cold.

Water vapor is the most important greenhouse gas.  The reason is that it absorbs radiation at many more wavelengths than CO2 (See answer 1) and the atmosphere contains nearly 100 times more H2O than CO2 molecules.  Without water vapor, the Earth would be covered in ice and life would not be possible.  The question is, how will atmospheric water vapor change if there is a small temperature increase caused by CO2 doubling.  This is known as the water feedback effect and is difficult to estimate.  The amplification of the 1 C warming generated by doubling CO2 range from none for the case of no change in atmospheric H2O to about 60% if one assumes that relative humidity will not change.  When faced with different theoretical predictions, one needs to observe the atmosphere.  Observations made using high altitude balloons and satellites do not show significant increase in water vapor over the past 50 years.

The preceding discussion refers to water vapor not CLOUDS.  One can ask if more atmospheric water vapor, will produce more clouds, thicker clouds, higher level Cirrus as opposed to lower level Cumulus clouds.  Clouds definitely affect temperature.  During the day, temperatures decrease when a cloud blocks the sun whereas at night clouds warm the surface.  Everyone realizes that clouds are critical to what will happen to the climate.  Unfortunately, our understanding of this subject is in its infancy.

Why is the role of oceans important to understand climate?

A liquid such as water has a much higher density than air and can therefore absorb much more thermal energy which is transported by ocean currents.  The most well known is the Gulf Stream that transports warm water from the Gulf of Mexico to northern Europe.  This is the reason why countries such as Nederland experience a much warmer climate than areas at similar latitude such as Labrador.

Sea surface ocean temperatures vary in time.  One of the best known is the so called El Nino Southern Oscillation  (ENSO) which describes a change of the sea surface temperature in the southern Pacific.  Sometimes a deep pool of warm water near Australia spreads out towards South America.  This in turn warms the air leading to significant precipitation changes along the west coast of North and South America.  Unfortunately, predicting ENSO as well as other oscillations such as the North Atlantic Oscillation (NAO) is not possible.  These temperature variations have been known for centuries.  In the case of the NAO, the Vikings knew that relatively cold European winters corresponded to warmer winters in Greenland/Iceland and vice versa.

In your book “Is Global Warming Hot Air?” you write that many climate scientists don’t question the correctness of climate models themselves. Why do they take it for granted that models always do function well?

It is unfortunate that many climate researchers do not question the climate models especially when the observations conflict with predictions.  One of the best known failures was that the average global temperature stopped increasing after 2000 which is called the hiatus.  Constructing a global climate model necessitates estimating a myriad of parameters.  Science has always progressed by comparing theory to observation.  If the theory is wrong, it must be refined.  I do not question the sincerity of the modellers but an accurate climate model is very challenging. 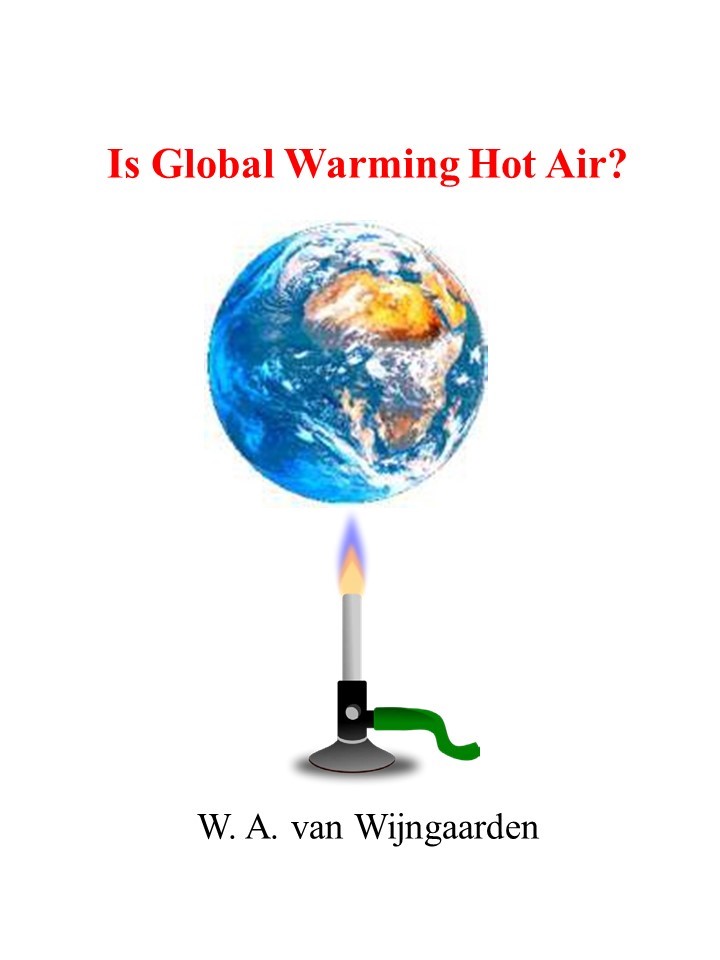 Many scientists in the US and Canada don’t share your opinion. How come?

It is unfortunate that when one asks about a discrepancy between climate models and observations at a climate conference, too often one hears the refrain:  “But the climate models all predict the same thing”.  Frequently, the output of a climate model is even described as data; this is nonsense.

Science is not based on opinion polls. This is something we all knew in Grade 1.  If the teacher asked what was 7 times 12, we did not poll our classmates, instead we looked at what the best student would answer.  There are a number of intelligent people who realize that the predictive record of the models is poor.  In private, a number of researchers will voice doubts but they are afraid to do so in public as their careers could be negatively affected.

You held prominent positions in the American Physical Society and the Canadian Association of Physics. How can a sound scientific climate be developed between climate scientists?

I try to present data whenever I give a talk.  It is difficult to argue with a thermometer or a satellite spectrometer, especially when one includes the measurement uncertainty in any result.  Audience members have approached me afterwards and said “it’s nice to see data” and “the data doesn’t support the hysteria.”

There has been a warming of about 1 C since 1850 in the Earth’s average surface temperature.  Some of this is undoubtedly due to increasing greenhouse gases but much of it is just natural variation.  The average global temperature was warmer during the 1920s to 1940s but cooler from 1950 to 1980.  Afterwards, the temperature warmed until the hiatus after 2000.  The reasons for these decadal variations are not well understood.

Our calculations and those of others show that for the case of a clear sky, doubling greenhouse gases such as CO2, CH4 and N2O and including H2O feedback will warm the Earth by about 1.5 to 2 C.  The global climate models predict warming as high as 5.5 C.  It should be noted that doubling CO2 will take several centuries.

Stopping the use of fossil fuels will significantly lower our standard of living.  Energy conservation is always excellent, but preventing the third world from developing is inhumane.  In short, the claim that the world will end in less than a decade unless emission of greenhouse gases is stopped, is not just based on bad science but is poor public policy.

How does science itself curb the climate hysteria you describe in your book?

The book “Is Global Warming Hot Air?” was written with a popular audience in mind.  I am sure that some of the climate folks are angry but I don’t care.

You are active in many fields of research, from applied physics like laser-isotope research, ultracold atoms, but also monitoring environmental pollution. Is a multi- disciplinary attitude important? Also in climate research?

Understanding a very broad subject such as the Earth’s climate encompasses a number of different fields from Physics, Chemistry, Geology to Biology.  The response of plants to increased CO2 will likely be very important.  Plants grow much faster at higher levels of CO2.  Greenhouses therefore pipe in extra CO2.  NASA studies estimate about 15% of the increased agricultural production during the 20th century was due to increased atmospheric CO2.  Moreover, at higher CO2 levels, the openings in the plant leaves called the stomata are smaller resulting in less water loss.  This is believed to be the reason why areas surrounding deserts appear to be greening.  Hence, predicting the future climate will necessitate understanding unforeseen subtle effects. 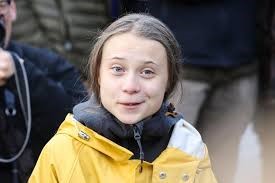 How do your children react on the doom and gloom stories held by Greta Thunberg?

My children are quite sensible.  My youngest daughter studies engineering and was given the following assignment: write a ½ page opinion editorial piece (op-ed) on the Global Climate Strike being led by Greta Thunberg. She tried to answer diplomatically, because her teacher is politically correct:

“Greta Thunberg can easily be termed the ideal leader of the Global Climate Strike.  The passionate young lady coming fcourage and actions as well as words are heartening for everyone.  I admire her ambition and will to speak up, she is doing more than most teenagers her age.  However, I question if she really has any understanding of the science behind climate given how much school she misses.  The science of climate change is not fully understood by anyone, but the field is full of many people who enjoy making predictions that lack accuracy. Despite this, Greta Thunberg has managed to appeal to a new generation to fight for issues such as pollution and irresponsible use of resources. Her Global Climate Strike is about more than climate, it is about empowering young people to speak up and take an active role in shaping the kind of world we live in.”

In the Netherlands there is an initiative of CLINTEL to broaden scientific debate by not only focussing on CO2 as a cause of global warming. Is it effective?

One has to be patient and politely point out how the observations support/differ from climate models. The worst thing for the climate fanatics would be if governments implement their espoused policies. Once, people see oil and natural gas taxes spiral upwards, they will rebel.  The taxes will be decreased and the regulations delayed.

Like most people, I want to protect and improve our environment.  I am also very supportive of energy conservation and expanding research.  Unfortunately, developing a better battery has proved to be a difficult undertaking even after a century of effort.  Similarly, a better understanding of the climate using more extensive satellite monitoring as well as land and ocean measurements should be a very high international priority.

(Thanks to  Guus Berkhout)