Pat Michaels was a lukewarmer, not a “denier” 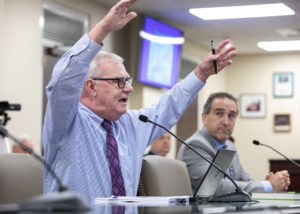 Guest “They also contradicted their own defamatory headline” by David Middleton

One of the most influential climate deniers in American history has died.

Patrick J. Michaels, who died Saturday at 72, created the modern concept of “lukewarmism,” which holds that humans are warming the planet but rejects the notion it will have severe consequences. That idea has become dominant in today’s Republican Party, which rejects significant restrictions on fossil fuels and has ignored the warnings of climate scientists who have said that unabated warming will be devastating for humanity.

Michaels was not a denier but a true skeptic who never stopped questioning scientific research, said Ryan Maue, who was tapped by former President Donald Trump to be NOAA’s chief scientist.

It’s one thing to defame someone in the headline and then contradict the defamatory remarks in the second and third paragraphs… It’s another thing to defame someone by accusing them of being something that is neither physically, nor grammatically possible. No one denies the climate. It’s not even possible to deny the climate… Physically or grammatically. “Lukewarmism” denies nothing. It doesn’t even reject economically viable reductions in greenhouse gas emissions. I will give E&E News some credit for quoting Dr. Ryan Maue, who very accurately and eloquently described Dr. Michaels as “a true skeptic… However, why continue with the use of the denier pejorative, if not for defamatory purposes? Nothing in the article supports the “denier” moniker.

Pat Michaels was a “lukewarmer,” as am I… As are many, if not most, scientists reasonably familiar with the subject matter. Anyone who has ever read any of Dr. Michaels’ books, particularly Climate of Extremes, would know that his view was that the observed warming over the past 50 years, or so, was consistent with an enhanced greenhouse effect and that this was, at least in part, due to greenhouse gas emissions from the combustion of fossil fuels.

Here’s a excerpt from his October 2018, interview on Mark Levin’s Life, Liberty & Levin…

LEVIN: It’s a great honor to see you, Patrick Michaels, doctor. Expert on all things climate and environment, as far as I’m concerned. A little bit of your background. You’re the Director of the Center for Study of Science at the Cato Institute. You hold an AB and SM, you hold those degrees in Biology, Sciences and Plant Ecology from the University of Chicago – pretty good school. PhD in Ecological Climatology from the University of Wisconsin in Madison, 1979. You’re past President of the American Association of State Climatologists. You were Program Chairman for the Committee on Applied Climatology at the American Meteorological Society. Say that fast five times.

LEVIN: You were a Research Professor of Environmental Sciences at the University of Virginia for 30 years, and I’m giving an extensive background that you have. I’m giving that to the public so they that you know you really know what you’re talking about. You’re a contributing author and a reviewer of the United Nations Intergovernmental Panel on Climate Change, which was awarded the Nobel Peace Prize in 2007.

All right, let’s get started. Climate change, global warming, global cooling – we’ve heard it all. What’s going on out there?

MICHAELS: Well, surface temperature of the planet is warmer than it was a hundred years ago about 9/10th of a degree Celsius.

LEVIN: Is that a lot?

MICHAELS: No. It’s not a lot. There are two periods of warning, one in the early 20th Century that could not have been caused by human beings because we hadn’t put enough CO2 in the air, and one in the later part of the 20th Century that either slows down or ends depending upon whose data you use somewhere in the late 1990s, only to resume with the big El Nino that covered the news the last couple of years.

So that means that probably about half, maybe half of that nine-tenths of the degree might be caused by greenhouse gases because when the planet warmed beginning in 1976, the temperature of the stratosphere started to drop and that’s the prediction of greenhouse theory that’s not intuitive. The great philosopher of science Karl Popper said, if you can meet a difficult prediction with your theory, you can continue to entertain your theory.

So the theory is right, but the application of it is wrong. It is nowhere near as warm as it’s supposed to be. The computer models are making systematic, dramatic errors over the entire tropics which is 40 percent of the earth, and it’s where all our moisture comes from or almost all of it.

Dr. Michaels was skeptical of the alarmist, catastrophic projections of climate models and didn’t agree with destroying our energy infrastructure in a Quixotic effort to control the weather 100 years from now. Every sane scientist familiar with the subject matter should at least accept that as a reasonable position, if not agree with it. It’s not a denial of anything.

Let’s look at the 2016 survey of the American Meteorological Society. One third of atmospheric scientists surveyed didn’t think that human activities were the primary driver of climate change over the past 50 years. Figure 1. According to the 2016 survey of the American Meteorological Society (Maibach et al., 2016), fully one third of atmospheric scientists don’t think human activities are the primary cause of warming over the past 50 years. Figure 2. Only 50% of “scientists” characterized climate change as being dangerous (primarily or exclusively harmful impacts) over the next 50 years. (Maibach et al., 2016)

It also found that atmospheric scientists were very divided on the efficacy of mitigation measures. Figure 3. Only 18% thought that we could prevent the weather from changing. Fully 41% of “scientists” indicated that climate change might as well be “ignored.”

Stenhouse et al., 2017 also failed to find a robust consensus among atmospheric scientists on the subject of climate change.

This article analyzes open-ended survey responses to understand how members of the American Meteorological Society (AMS) perceive conflict within the AMS over global warming. Of all survey respondents, 53% agreed that there was conflict within the AMS; of these individuals who perceived conflict, 62% saw it as having at least some productive aspects, and 53% saw at least some unproductive aspects. Among members who saw a productive side to the conflict, most agreed as to why it was productive: debate and diverse perspectives enhance science. However, among members who saw an unproductive side, there was considerable disagreement as to why. Members who are convinced of largely human-caused climate change expressed that debate over global warming sends an unclear message to the public. Conversely, members who are unconvinced of human-caused climate change often felt that their peers were closed-minded and suppressing unpopular views. These two groups converged, however, on one point: politics was seen as an overwhelmingly negative influence on the debate. This suggests that scientific organizations faced with similar conflict should understand that there may be a contradiction between legitimizing all members’ views and sending a clear message to the public about the weight of the evidence. The findings also reinforce the conclusion that attempts by scientific societies to directly address differences in political views may be met with strong resistance by many scientists.

While the vast majority of atmospheric scientists would agree with Dr. Michaels on the underlying science, there clearly is a wide divergence of opinions on the nature of the problem and what, if anything, to do about it. Disagreeing with the most catastrophic model projections is not a denial of the science or anything else. E&E’s use of the word “denier” is clearly defamatory and “has the pejorative ring of Holocaust denier.” It is simply a fact that many models and model scenarios have predicted significantly more warming than has actually occurred.

One study suggests Arctic rainfall will become dominant in the 2060s, decades earlier than expected. Another claims air pollution from forest fires in the western United States could triple by 2100. A third says a mass ocean extinction could arrive in just a few centuries.

All three studies, published in the past year, rely on projections of the future produced by some of the world’s next-generation climate models. But even the modelmakers acknowledge that many of these models have a glaring problem: predicting a future that gets too hot too fast. Although modelmakers are adapting to this reality, researchers who use the model projections to gauge the impacts of climate change have yet to follow suit. That has resulted in a parade of “faster than expected” results that threatens to undermine the credibility of climate science, some researchers fear.

Scientists need to get much choosier in how they use model results, a group of climate scientists argues in a commentary published today in Nature. Researchers should no longer simply use the average of all the climate model projections, which can result in global temperatures by 2100 up to 0.7°C warmer than an estimate from the Intergovernmental Panel on Climate Change (IPCC). “We need to use a slightly different approach,” says Zeke Hausfather, climate research lead at payment services company Stripe and lead author of the commentary. “We must move away from the naïve idea of model democracy.” Instead, he and his colleagues call for a model meritocracy, prioritizing, at times, results from models known to have more realistic warming rates.