From the Cliff Mass Weather Blog

There is a lot of talk about the short-term European heatwave with some suggesting that the record-breaking warmth is the result of climate change/global warming.

Some of the media and climate advocates have been over the top in their claims (see below), stating that this event was the result of human-caused global warming.

The truth and overwhelming scientific evidence provide a different story:  the recent European heatwave is mainly the result of natural processes but was enhanced modestly by human-caused global warming.

The situation is very much like the Northwest heatwave of last summer;  with many of the same elements.

A Short But Dramatic Heat Event

As noted in the media, a number of locations broke all-time temperatures records, with some locations in England reaching 40°C  (104°F).   The map below shows the locations breaking records on July 18th, with the x’s showing locations exceeding all-time record highs.

At some locations, the previous all-time record highs were smashed by several degrees, something illustrated by this plot of the central English temperatures (shown below).   The blue line is this year’s temperature, the black line is the average value, and the pink line shows previous daily records.

The high this week for central England  was absolutely unparalleled, particularly regarding the deviation from the previous record high.  Also note that the heat wave was very short. 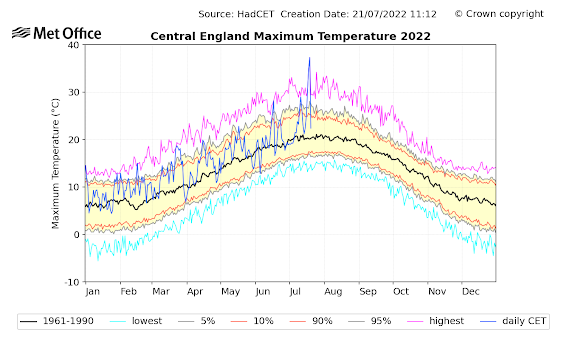 In many ways, this event was like last year’s heatwave in the Northwest, with previous records being absolutely smashed.

Ironically, such an extraordinarily extreme event is a sign that global warming played a very small role in this event.  This reflects the

Let me demonstrate how the “Golden Rule” applies in this event.

Europe and England have been warming during the past decades and some of that warming is probably caused by increasing greenhouse gases such as CO2.    To illustrate, below are the long-term changes in maximum summer temperatures over England from the UK Met Office.

Mean maximum temperatures had little overall trend from  1890 to around 1970 and then warmed around 1 C (about 2 F) during the last 50 years.

I can show you similar plots of other European locations, all of which suggest about 1-1.5C of warming.

Let us assume ALL of this warming is due to increasing CO2 and other greenhouse gases.  Let us further assume that none of it was due to urbanization or changes in instrumentation (which can also produce warming temperatures).

That background warming of around 1°C  is absolutely dwarfed by the magnitude of the heatwave, in which maximum temperatures were as much as 20C above normal (as shown by the figure above).

So why were the temperatures so extreme this week?

The reason is the development of a large ridge of high pressure, something called a ridge, which produces warming by sinking and moving air northwards on its western flanks.

Here is the upper level (500-hPa pressure level, about 18,000 ft) at 5 PM PDT July 17th.  The ridging (high heights or pressure) are indicated by the red-orange colors.   Note there was a trough (blue colors) of lower pressure on its southwest side.  This feature increases southerly flow that brings up warmer air. 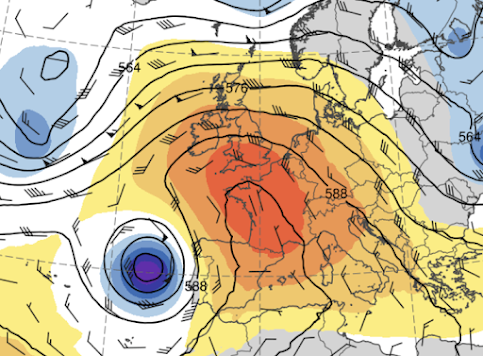 Now a shocker.  Below is the same kind of chart for the great Northwest heatwave.

OMG!   Very similar, including the low  to the southwest! 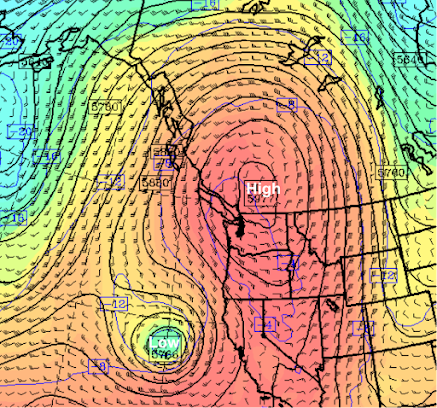 Such a low center, by enhancing southerly flow moving into the ridge of high pressure, acts as a supercharger for the warmth. 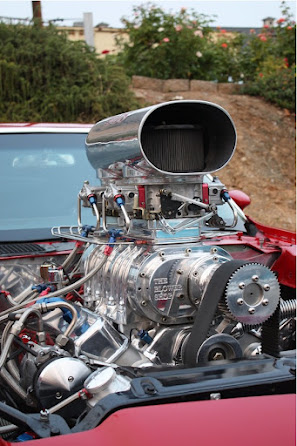 High amplitude, wave patterns can be produced by natural variability and there is no evidence that the ridge in question resulted from global warming.

Ironically such a pattern also produces enhanced cooling to the east and west, something shown by the temperature anomalies (difference from normal) six hours later (red/brown above normal, blue below normal). 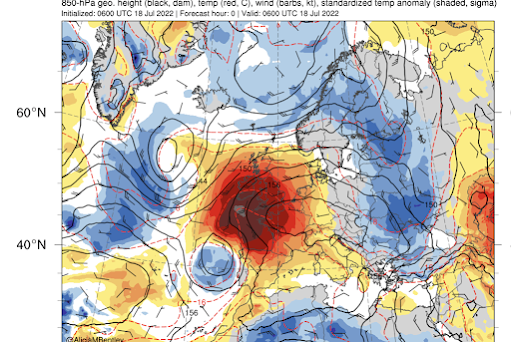 One should note that major heatwaves periodically hit Europe, such as in 2003 and 1976.

The bottom line is that the recent European heat wave was caused by an amplification of the northern hemisphere wave pattern, with global warming contributing perhaps 5-10% of the warmth.  Natural variability of the atmosphere was the proximate cause of the warmth and does not represent an existential threat to the population of Europe. 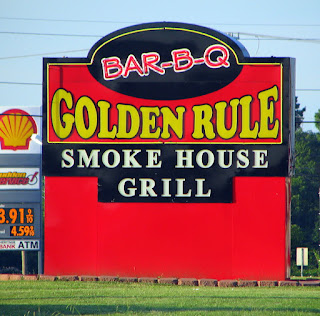