Mortality from extreme weather down 99% in last century
Climate damage also declined over the past thirty years
Adaptation is profitable, mitigation is harmful

The world should focus much more on climate adaptation and much less on mitigation. This is the conclusion of the global Climate Intelligence Foundation (CLINTEL) following the international climate summit that took place in the Netherlands over the past two days. Adaptation has already amply proven its value, while mitigation turns out to be inefficient and expensive. A ‘green recovery’ (Build Back Better) from the corona crisis with a strong emphasis on mitigation – which was constantly advocated during the climate summit – is therefore a misleading message.

The Netherlands hosted a global online conference on climate adaptation in the past two days. A great initiative! There is no better place in the world to host such a summit. Note that since 2018 the Netherlands also hosts the Global Center on Adaptation.

In the field of water protection, the Netherlands deserves the unofficial title of ‘world champion of adaptation’. We have been doing nothing else for centuries and our dikes have a flooding probability of 1 in 10,000 years while once every 100 years is common in the rest of the world. Delta science is big in The Netherlands. And Dutch experts also increasingly invest in adapting agricultural crops to changing climate conditions (drier, wetter, saltier etc.).

The CLINTEL Foundation has been a strong supporter of climate adaptation since its start in 2019. It is therefore pleased that the Netherlands has put this form of climate policy back on the international agenda. Too often and for too long, adaptation has been a neglected child. As we stated in our founding document ‘Exploiting Climate Change’: “Many lives have demonstrably been saved with adaptation, while the same cannot be said for mitigation (CO2 reduction) whatsoever.”

History under the carpet
Now that the summit is over, CLINTEL finds it incomprehensible that all the good news that climate adaptation has brought over the past century has remained largely underexposed. Adaptation is presented as a ‘last resort’ that unfortunately has to be deployed because the Paris climate objectives (keeping the world below 2 degrees or preferably even below 1.5 degrees warming) will probably not be met. This is a great injustice to the role of adaptation. After all, adaptation has already ensured spectacular progress over the past century. Why is this not mentioned?

With two recently published graphs (see below) we show how much has already been achieved, mainly thanks to prosperity and adaptation, and that there is absolutely no evidence for an impending climate crisis, as CLINTEL stated in its World Climate Declaration. The message of these graphs: ‘Mankind is increasingly able to cope with extremes. There is no reason to assume that this positive development will turn into a negative one tomorrow. Why are we sliding this evidence under the carpet?

Less casualties
The first graph below shows the spectacular decline in the number of victims in the world due to extreme weather events like heat, cold, floods, drought, hurricanes and wildfires. A century ago, when global population was 2 billion, 500,000 people on average died each year as a result of weather disasters. Last year ‘only’ 8200 people died in such disasters, while the global population now is 7.6 billion. This is an absolute decline of 98% and a relative decline of more than 99%.

Of course we can still do better we should be proud and open about this huge performance which is largely the result of increasing wealth and technological improvements. The richer countries become, the better they can protect their citizens against weather extremes. But note, the huge improvement in the past century also took place in the poorest countries of the world! 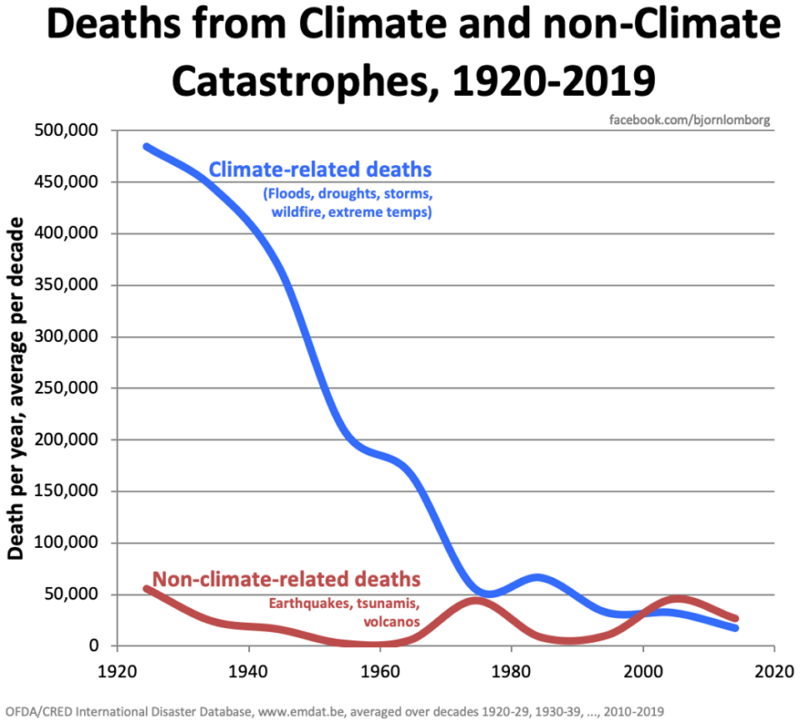 Again, a remarkable result if you think up how often during this Climate Summit people claimed there is an ever increasing cost due to disasters. Because in reality the cost due to disaster, as a percentage of GDP, has declined. This happened in a period during which CO2 emissions grew faster than ever before, regardless of the 25 international climate conferences that took place, in which they tried to limit these emissions.

The story that these two graphs tells us is not that climate change is not happening or that it is irrelevant, but that a richer mankind is getting better and better in dealing with these changes. So, adaptation!

Adaptation vs mitigation
In a 2019 report, the Global Commission on Adaptation already stated that one dollar invested in adaptation yields about four dollars in benefits. In other words: Adaptation yields prosperity. However, the Commission forgets to mention that mitigation scores much worse. Danish environmental economist Bjorn Lomborg estimates in a recent study that one dollar going to the Paris Climate Agreement (mitigation) yields only 11 cents in benefits. In other words: Mitigation yields poverty.

Conclusion
The message of the world leaders on adaptation is misleading and wrong. CLINTEL’s message to the world is: ‘Increase investments in adaptation, stop pouring money into mitigation’. In other words: ‘Abandon the targets of the Paris Agreement’.

CLINTEL
The Climate Intelligence Foundation (CLINTEL) was founded in March 2019 by Emeritus Professor of Geophysics Guus Berkhout and science journalist Marcel Crok. Since then, CLINTEL has rapidly grown into a global organization in 36 countries with 23 ambassadors. CLINTEL wants to engage in fundamental discussion with leading scientific organizations on climate and energy. To this end, it has issued a World Climate Declaration, a Scientific Manifesto with a message to all Academies of Science, a Magna Carta Universitatum with a message to all universities and its energy vision Energia Renovabilis with an energy message to all administrators and politicians.